It wouldn't be hard to make the argument that Yonge and Bloor is the heart of Toronto. It's the dividing line between downtown and midtown, it's where our two most prominent subway lines meet, and soon it'll be the city's tallest intersection as well.

How long it maintains the latter mantle will depend on what happens with other super tall developments and whether or not Cumberland Terrace is revamped over the next decade, but the immediate future of this corner is likely to change the way Toronto sees itself. 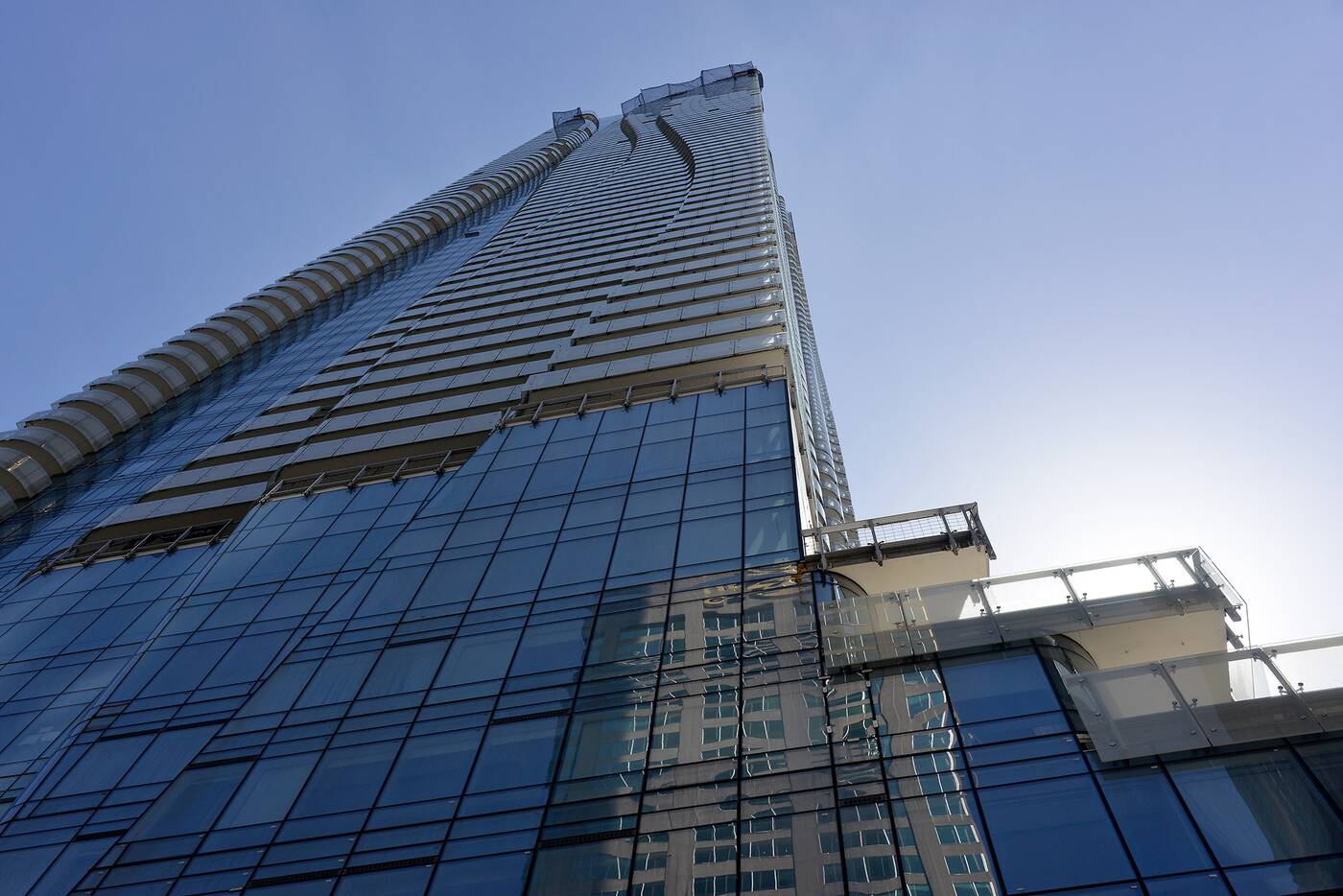 Looking up the north face of One Bloor East. Photo by Derek Flack.

We already have plenty of tall buildings, sure, but what's currently happening at Yonge and Bloor sets a new precedent. These will be incredibly tall towers but also sites with extremely valuable retail space, including a sprawling new Nordstrom Rack.

Great Gulf's One Bloor East, the first of the dual arrows set to stick out of this urban bullseye, has already reached 257 metres, while Mizrahi's The One is on the way at 304 metres. 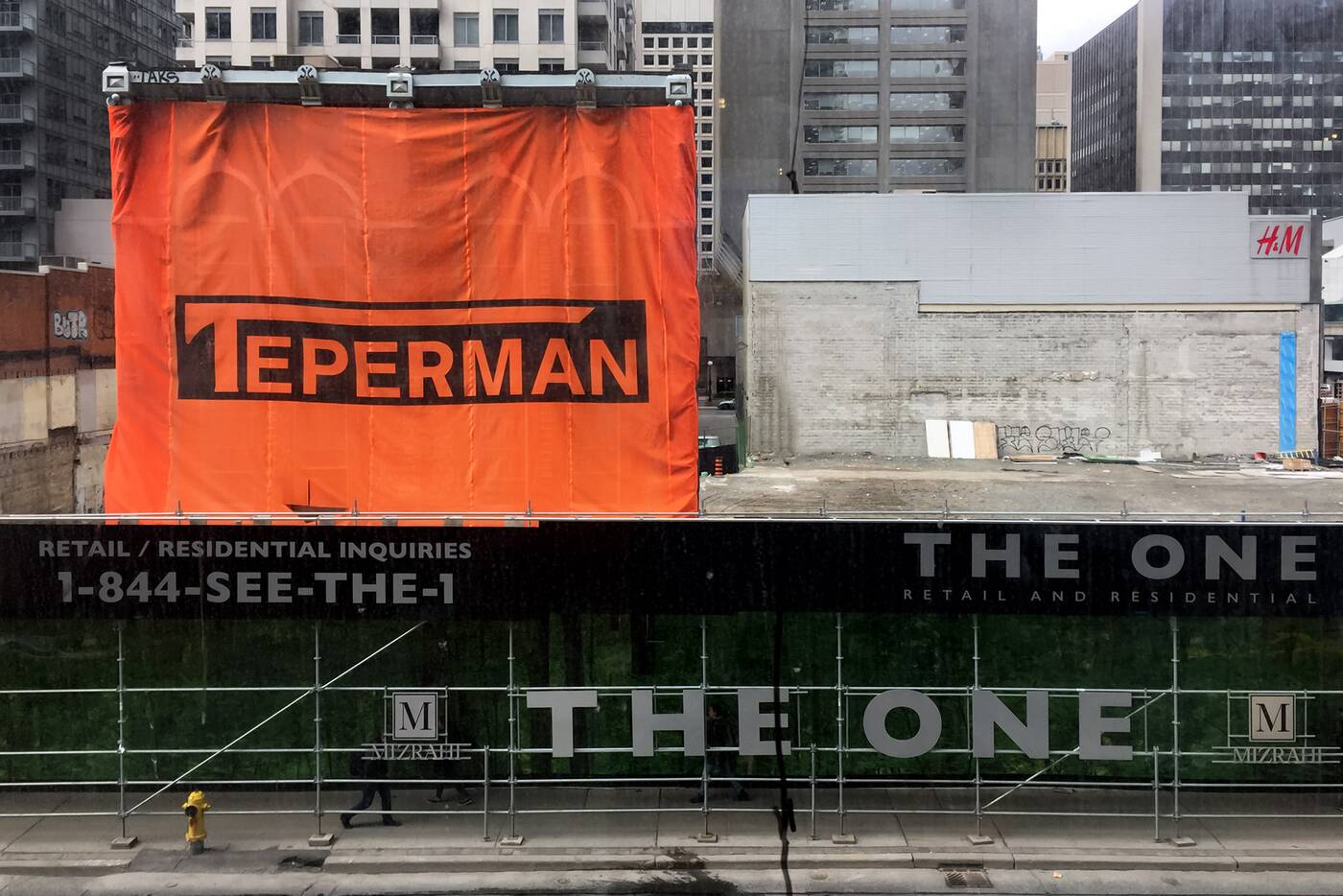 Looking at the site of The One from the second floor of One Bloor East. Photo by Derek Flack.

Right now, The One is just an empty lot on the southwest side of the intersection marked by a lone historical structure that will eventually be incorporated into the retail levels of the huge mixed use project. 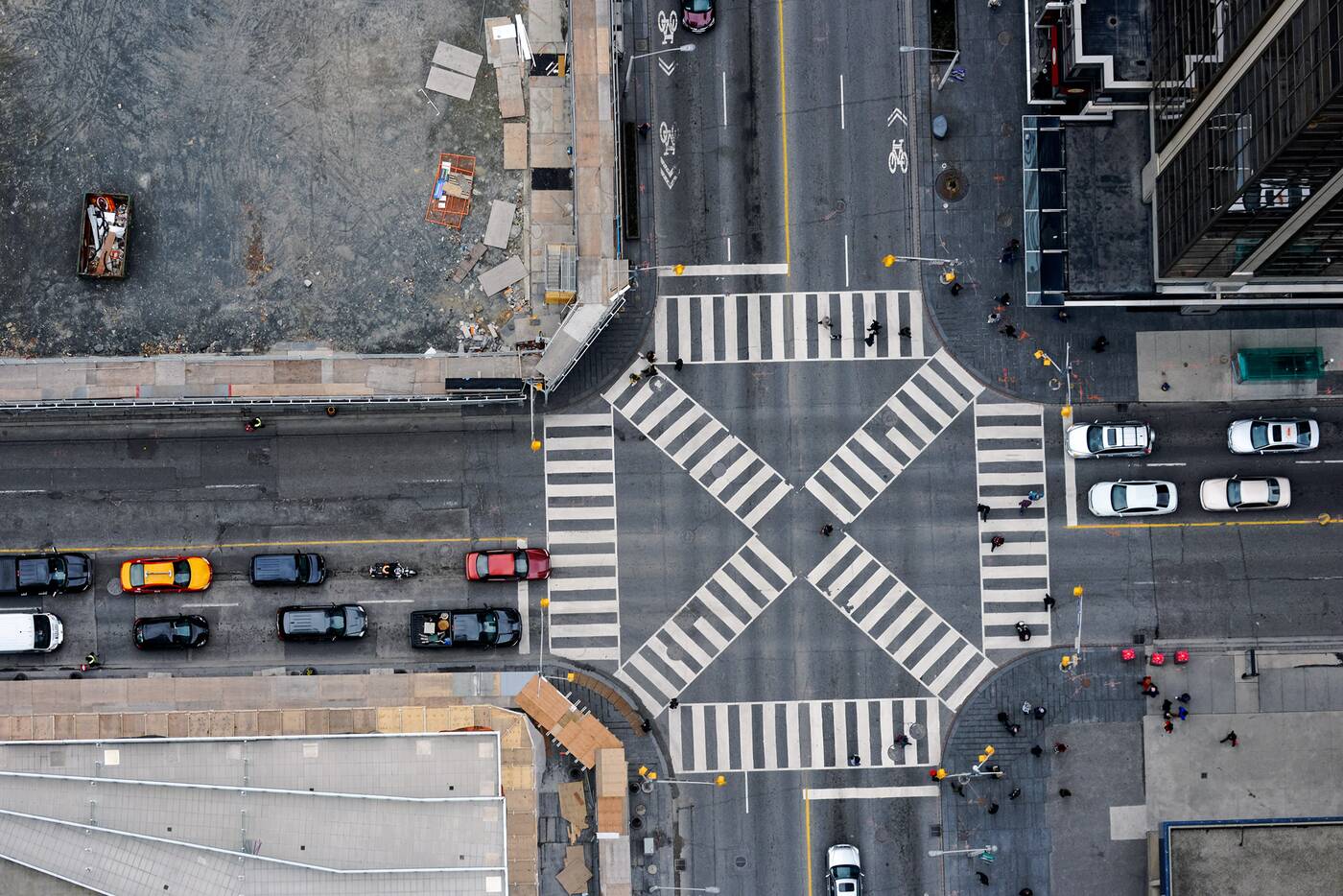 The site of The One primed to transform Yonge and Bloor. Photo by Derek Flack.

What's striking about the eventual home of what will at least temporarily be Toronto's tallest building is how small the footprint of the site is. While the east side of the intersection looked like a huge scar when it was razed back in 2008, its neighbour will do more with less.

What that boils down to is that there's going to be some major density here — 28.3 times the area of the site to be exact. By contrast, One Bloor East comes in at 17.3 times its site area, and you wouldn't consider it a slouch in this department. 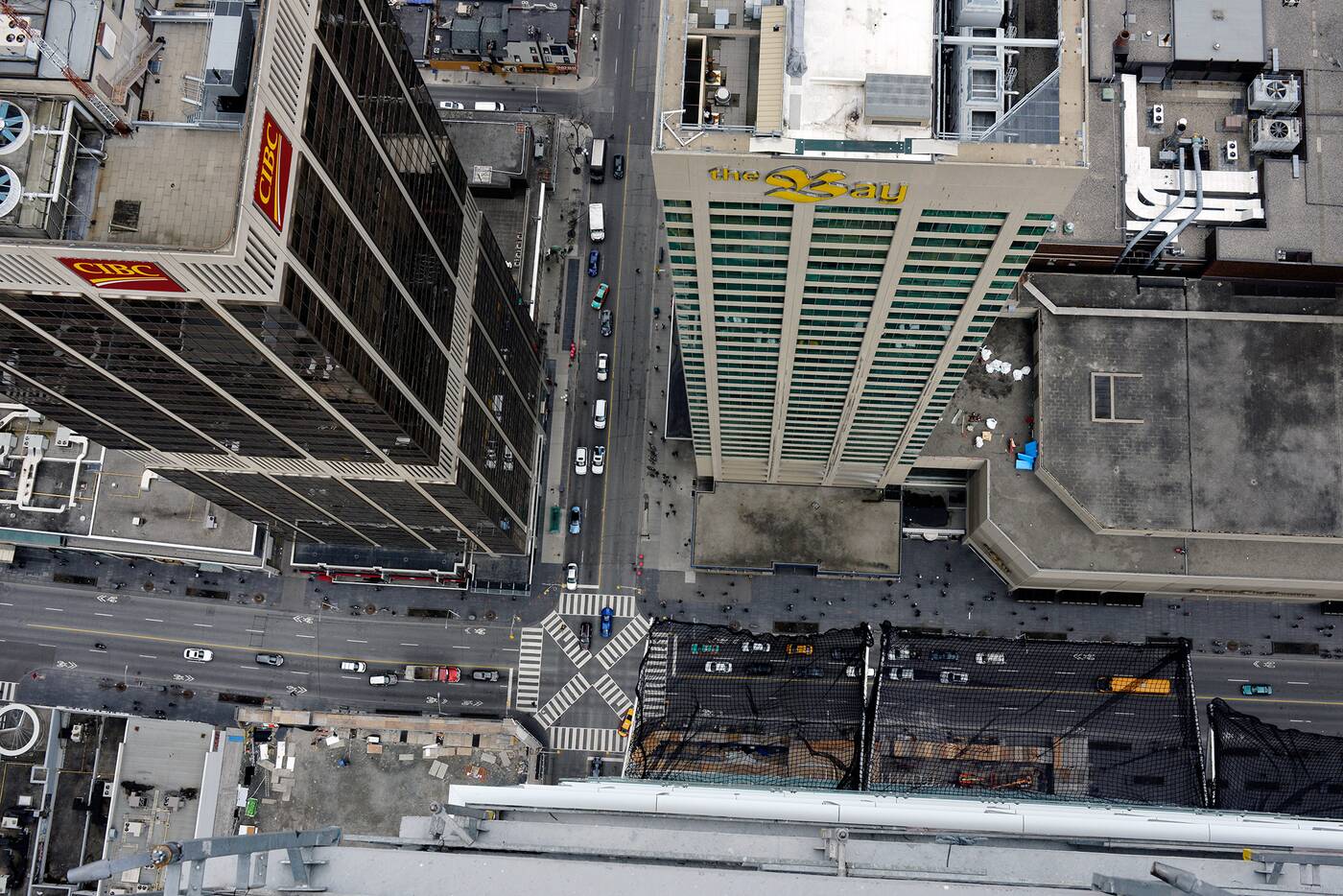 The 1970s towers on the north side of Bloor are already dwarfed by One Bloor East. Photo by Derek Flack.

Both of these buildings will dwarf the 1970s legacy of the intersection in the form of Two Bloor East and Two Bloor West, which hover at 34 storeys each. The roughly 40 years that separate the north and south side developments are tidily represented by 40 storeys of height.

Designed by Hariri Pontarini and Foster + Partners (with input from Core Architects), respectively, both One Bloor East and The One aim to be show stoppers beyond just their floor counts. 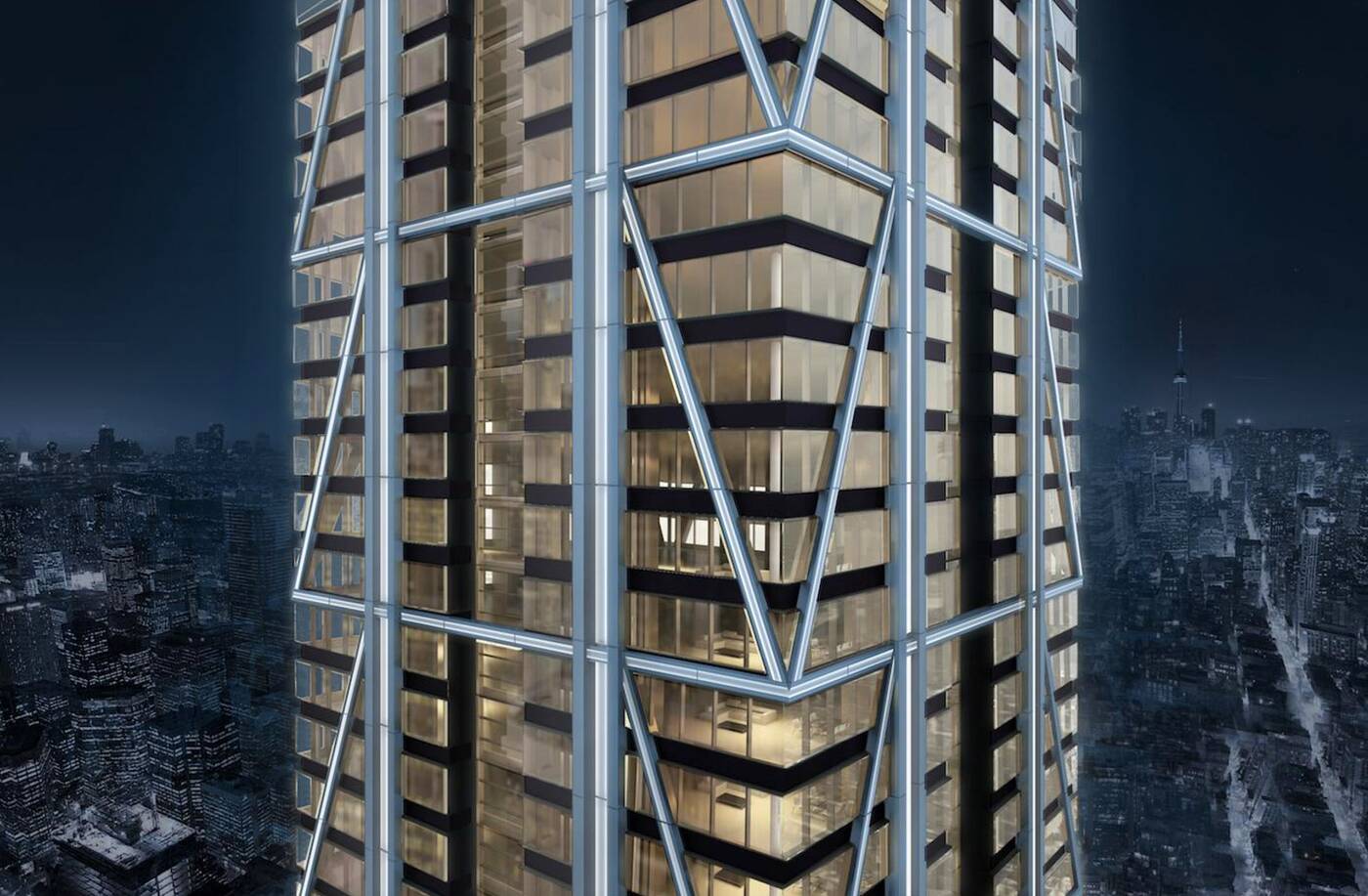 Nighttime view of The One. Rendering courtesy of Mizrahi.

The former is all about curved lines, while the latter uses a lattice-like skeleton to draw visual interest to the cladding, which will glow with a golden hue in the evening and at night. 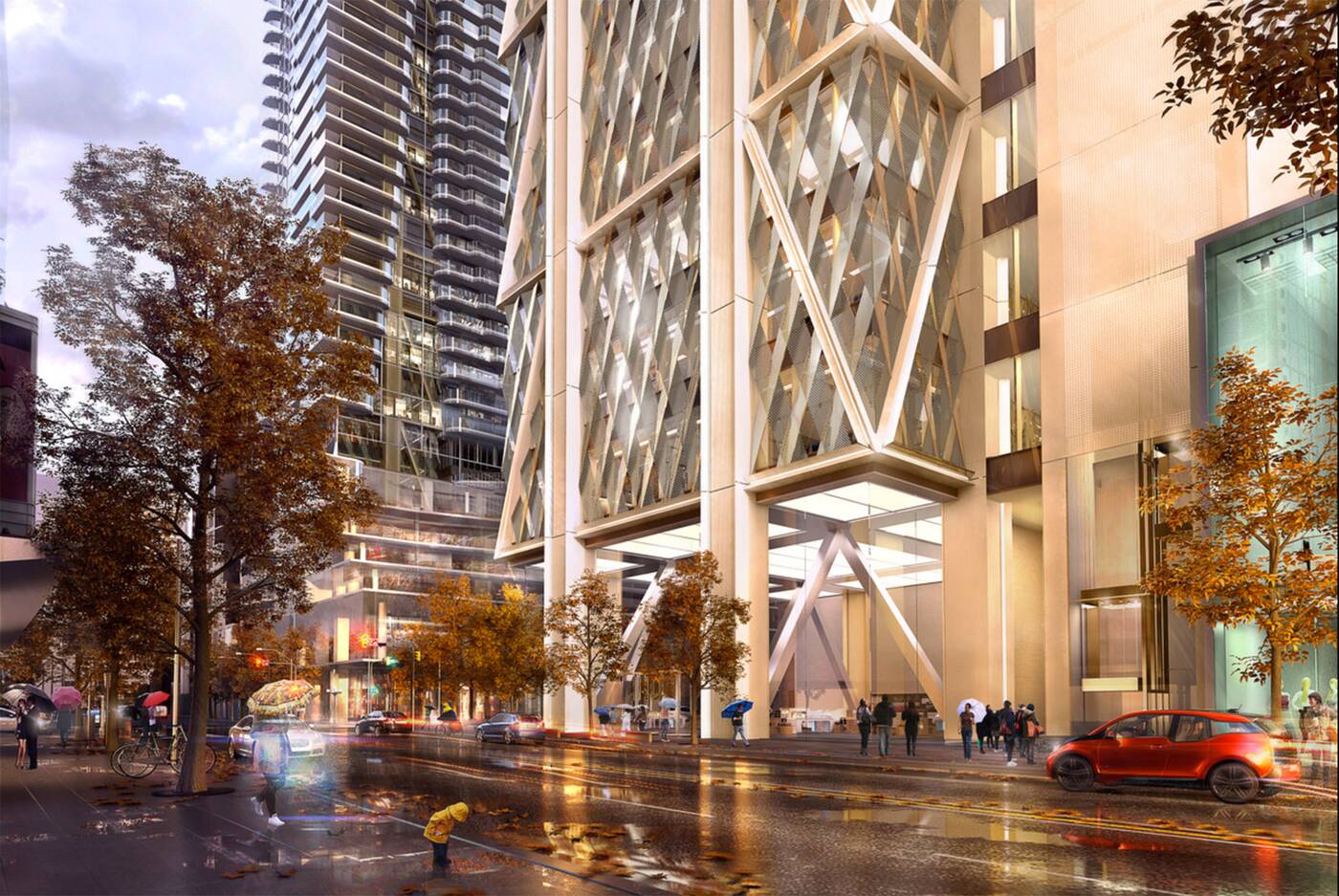 Looking southeast at The One with One Bloor East in the background. Rendering courtesy of Mizrahi.

They've played around with the design of The One a fair bit since it was first proposed, but from the street, the sentiment remains the same. The sidewalks will be widened thanks to an overhanging section of the building, which will help confer the importance of the corner.

The extra space will also be crucial given how many more people will be using the intersection. Over and above all the people set to live here (over 30 floors of One Bloor East are already occupied), the eight storeys of retail at The One will add lots of activity to the street. 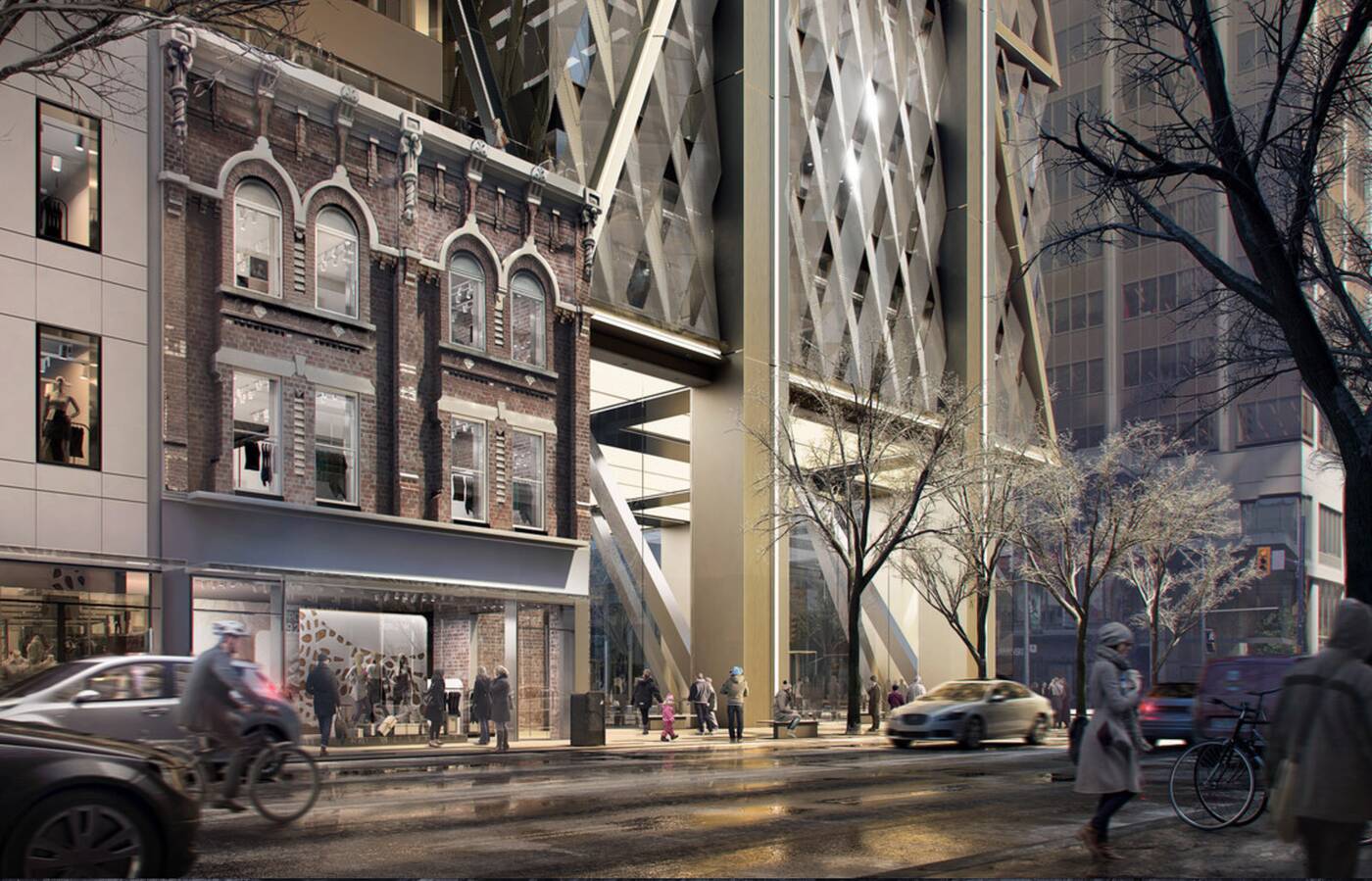 Looking northwest across The One and its various retail elements. Rendering courtesy of Mizrahi.

Yonge and Bloor has been a vibrant intersection for over a century, but in the years ahead, it's poised to become one of the city's most important hubs, where thousands of people will live, work, and shop all within a few metres of one another.

This isn't an entirely new way of planning for Toronto, but the scale of what's going on here is groundbreaking. Density of this kind has often been frowned upon in this city, but at Yonge and Bloor things are only looking up.