To most Canadians, the thought of spending more than $2,000 per month on rent seems ludicrous. Anyone who lives in Toronto can attest to this in the form of snarky comments from out-of-town relatives who think we're "insane" for paying so much.

We're not — but our city's real estate market is, especially since the pandemic hit and turned rent prices on their heads.

After falling by more than 20 per cent last year, rents are slowly starting to climb back up, though they're still nowhere near the peaks we experienced during the summer of 2019.

The latest National Rent Report from rentals.ca and Bullpen Research & Consulting shows that the average rent price (not to be confused with the median rent price) across all property types and sizes in Toronto was $2,170 for August of 2021, representing a decline of 2.3 per cent year-over-year.

Both one and two bedroom units were down on an annual basis at $1,989 and $2,628 respectively, though they did rise on a monthly basis between July and August by 7.2 per cent for one-bedrooms and 0.8 per cent for two bedrooms. 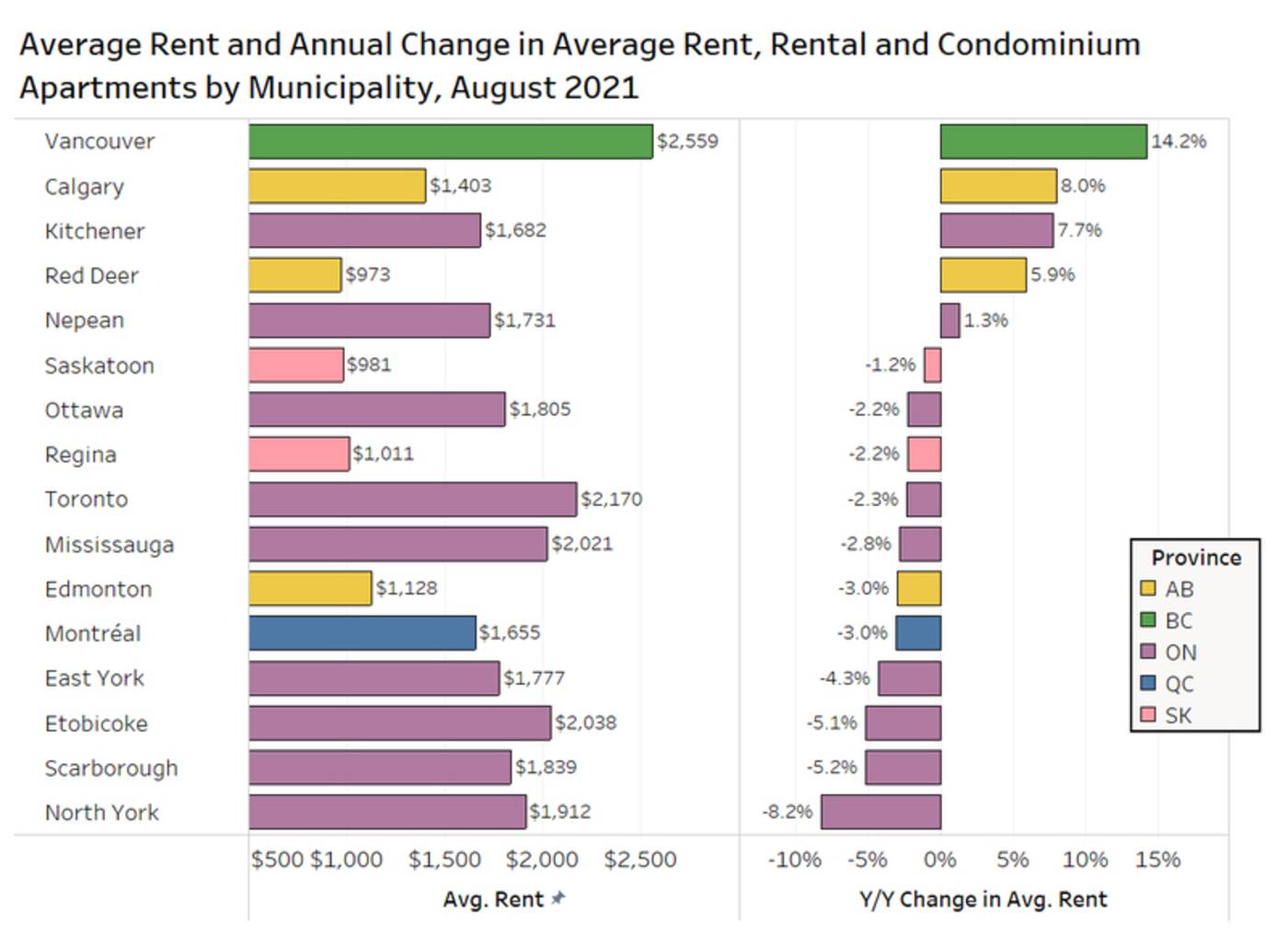 Average rent prices are recovering from pandemic-induced lows in Toronto, but are still down on a yearly basis. Image via rentals.ca.

One of the more interesting charts from this month's rent report breaks down the average rental prices across different Toronto neighbourhoods in August of 2019, 2020 and 2021.

At present, there are only three neighbourhoods listed where prices average out under the $2,000 mark — and that's actually an improvement over the previous year when one such neighbourhood (south Parkdale) existed.

As of August 2021, the average rent for condos and apartments of all sizes in south Parkdale was a mere $1,691. This represents a decline of 14.2 per cent over the year previous, and 27.3 per cent over the past two years.

Talk about insane, am I right? 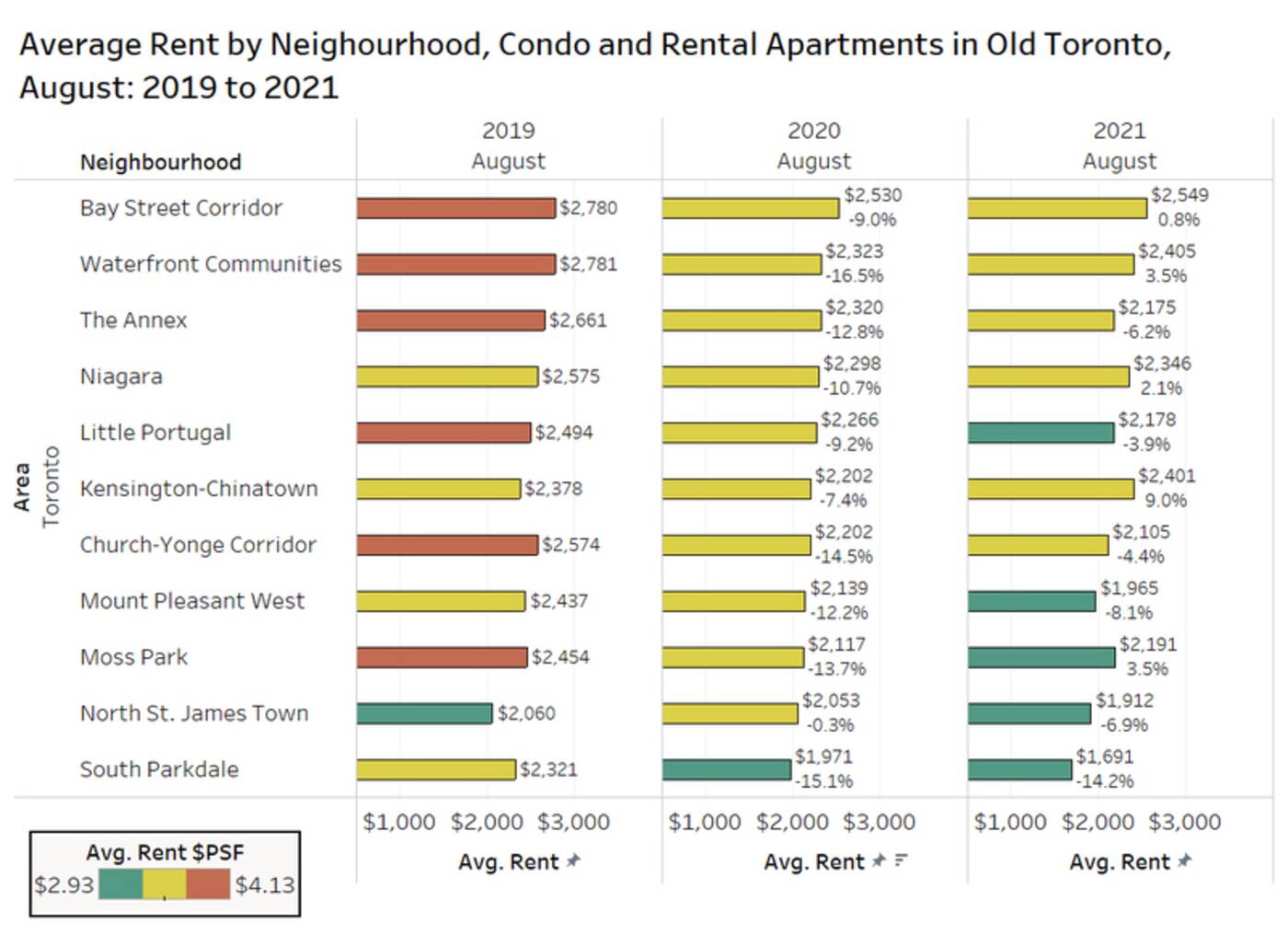 There are now 3 neighbourhooods with average rents below the 2K mark, up from zero at the same time of year in 2019. Image via rentals.ca.

The next-cheapest neighbourhood in the bunch for August was Mount Pleasant West, down 8.1 per cent year-over-year to reach an average rent price of $1,965.

But this falling rent phenomenon is far from consistent: In Kensington-Chinatown, for instance, prices have actually shot up over the past year to reach a new average of $2,401 (an increase of 9 per cent.)

The bottom line is that rent prices remain wildly inconsistent in Toronto as we recover from the pandemic, and it's unclear when things will bounce back to normal with the delta variant bringing a fourth wave of COVID into full swing.

"As the country attempts to return to normal, the average rent in many major municipalities (i.e. Toronto, Vancouver etc.) have shown signs of recovery, hitting lows earlier this year before showing significant increases in recent months, reads the rentals.ca report.

"We will continue to monitor the data to understand if there is increased demand for downtown properties, or a further increase in demand for larger suburban properties."