Average Toronto rent prices haven't been this low in 3.5 years

The median rent price for a one-bedroom apartment in Toronto is currently cheaper than it has been since July of 2017, according to Padmapper's newly-dropped monthly Canadian rent report for January 2021.

This represents a staggering year-over-year price drop of 20 per cent since this time last year, and the lowest average one-bedroom rental rates we've seen in the city since three-and-a-half years ago.

"Vancouver continued to reign as most expensive city ahead of Toronto," reads the report, which is released every month based on an analysis of rental data from hundreds of thousands of active listings across the country.

"While Vancouver one-bedroom rent stayed flat last month, Toronto rent actually dropped another 3.7 per cent, widening the price gap between these two cities to over $100," the report continues.

"Toronto one-bedroom rent also had the largest year-over-year dip in the nation, down over 20 per cent." 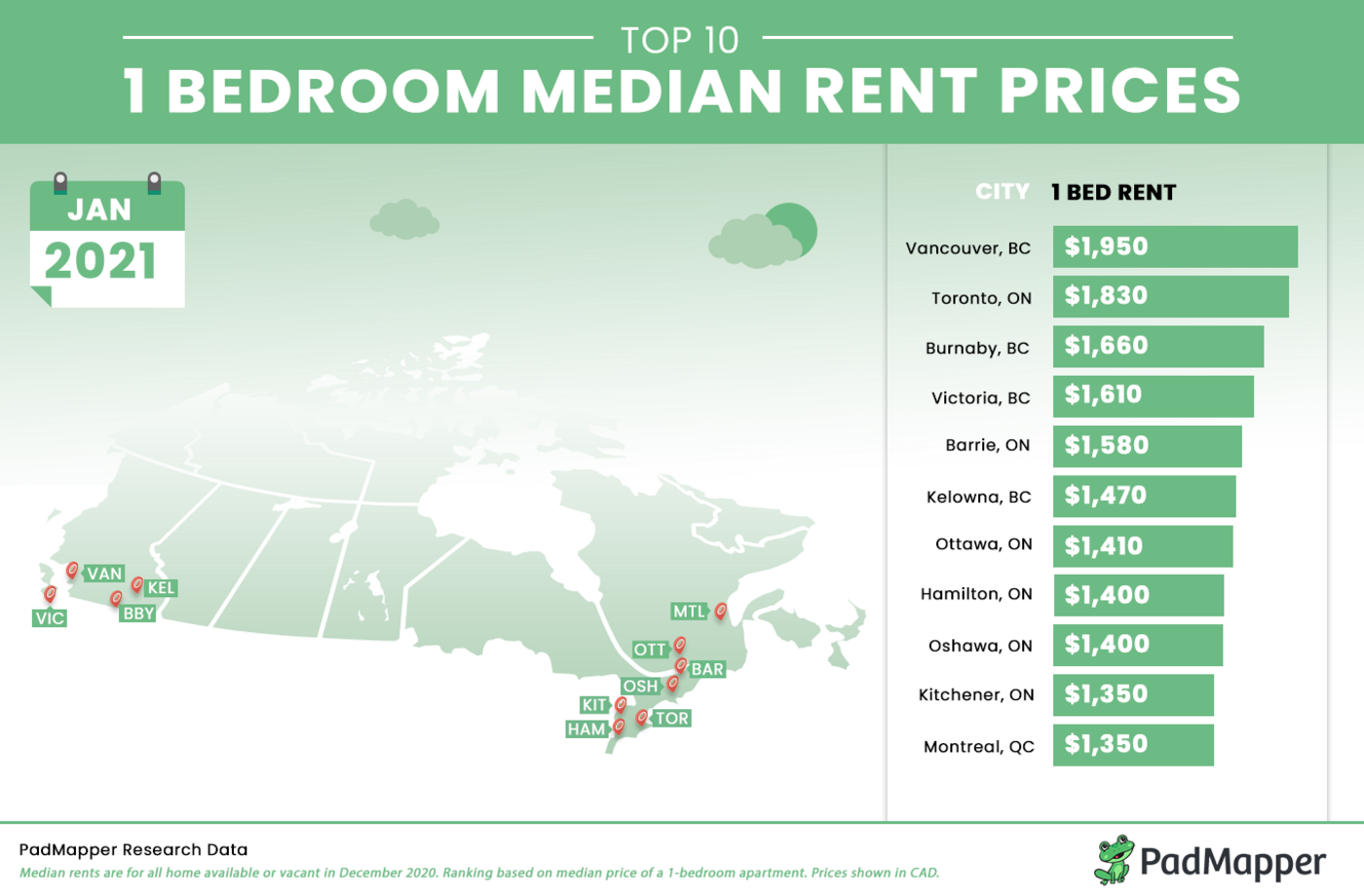 Vancouver finally surpassed Toronto as Canada's most expensive city in December for the first time since July 2018. Image via Padmapper.

By Padmapper's estimation, the median price of a one-bedroom rental unit in Toronto is currently $1,830 (down 3.7 per cent since December of 2020) while two-bedroom units are down 2.4 per cent for an average price of $2,470.

In August of 2019, just two years later, we were sitting pretty at a median one-bedroom rent price of $2,300, where the city remained until November when it hit a two-month-long peak of $2,350 per month.

Then along came the coronavirus.

In January of last year, average rents had dropped but a meagre $50 per month, back down to $2,300 — not huge, but better than another increase. February's numbers were the same.

In March, Padmapper reported an average rent price of $2,230, and prices have been falling steadily, steeply downhill ever since.

Toronto is no longer the most expensive city in Canada for apartment rentals https://t.co/Dmhu2SHOtR #Toronto #RealEstate #TorontoRealEstate

Experts have explained the "why" of this phenomenon at length in recent months, pointing to border restrictions, a short-term rental industry glut, less students in the city, and work-from-home condo dwellers fleeing Toronto for larger, cheaper homes.

The "what next?" part is a little unclear as the pandemic drags on and people remain locked down by government order.

With vaccines against the virus now starting to roll out, there is an end to the lockdown in sight, but it remains to be seen if that will drive rent prices back up again — and by how much.

What we do know is that they won't be able to skyrocket by much until next year, as the Ford government has put a rent freeze into place for all of 2021.

The freeze applies to "most tenants" living in rented houses, apartments and condos built in any year (as opposed to only those eligible for rent control protections.)

This isn't to say that apartment and condo rentals won't grow more expensive if demand rises later this year — owners of vacant units can ask for however much they want — but people who are thinking about renting a new pad might be wise to lock into something soon, while places are still pandemically-priced.