There's never been a better time to be in the market for a "micro-condo" in downtown Toronto — or a worse time to live in one, I'm afraid.

Once hailed as the future of downtown real estate, these ultra-tiny, sky-high units — some so small that they can't fit ovens — were immensely popular in Toronto two years ago, when vacancy rates were at historic lows and rent prices were skyrocketing.

Now, thanks to the pandemic and all of the various lifestyle changes it has inspired, realtors are having trouble selling off anything less than 500 square feet — let alone getting contracts signed for piddly pre-construction pads.

The proof is in the pudding, as they say, if "pudding" is to mean "local housing market data."

Real estate broker and prolific data analyst John Pasalis of Realosophy released a comprehensive report on Wednesday detailing how the GTA market is faring this month amid ongoing COVID-19 woes.

His November 2020 Move Smartly report looks at everything from rent prices (still falling) and detached home sales (still rising) to which condo sizes, specifically, are selling the best — and the worst — right now.

Consistent with what we've seen from TRREB, Urbanation, BILD and other leading data resources in recent months, Pasalis found that buyers are skewing away from tiny units in favour of larger, more-liveable spaces.

"While Toronto's condo market is showing signs of cooling, some units are performing better than others," reads his report.

"One way to measure this is to compare the current number of properties for sale against the number of homes that sold over the past month which gives us a metric called the Months of Inventory (MOI)."

Basically, the higher the MOI, the "the more inventory there is relative to current demand."

Last October, condos larger than 2,000 square feet led the pack in terms of available supply across the GTA. This October, units smaller than 500 square feet are far and above the most oversupplied, followed by units between 500 and 600 square feet.

"The most oversupplied units in the condo market today are units that are smaller than 600sq ft. In fact, these units are more oversupplied and harder to sell than units that are over 2,000 sq ft in size which tend to be in the luxury segment," wrote Pasalis.

"If you're looking to buy a condo that is smaller than 500 sq ft, the supply of units significantly exceeds demand today." 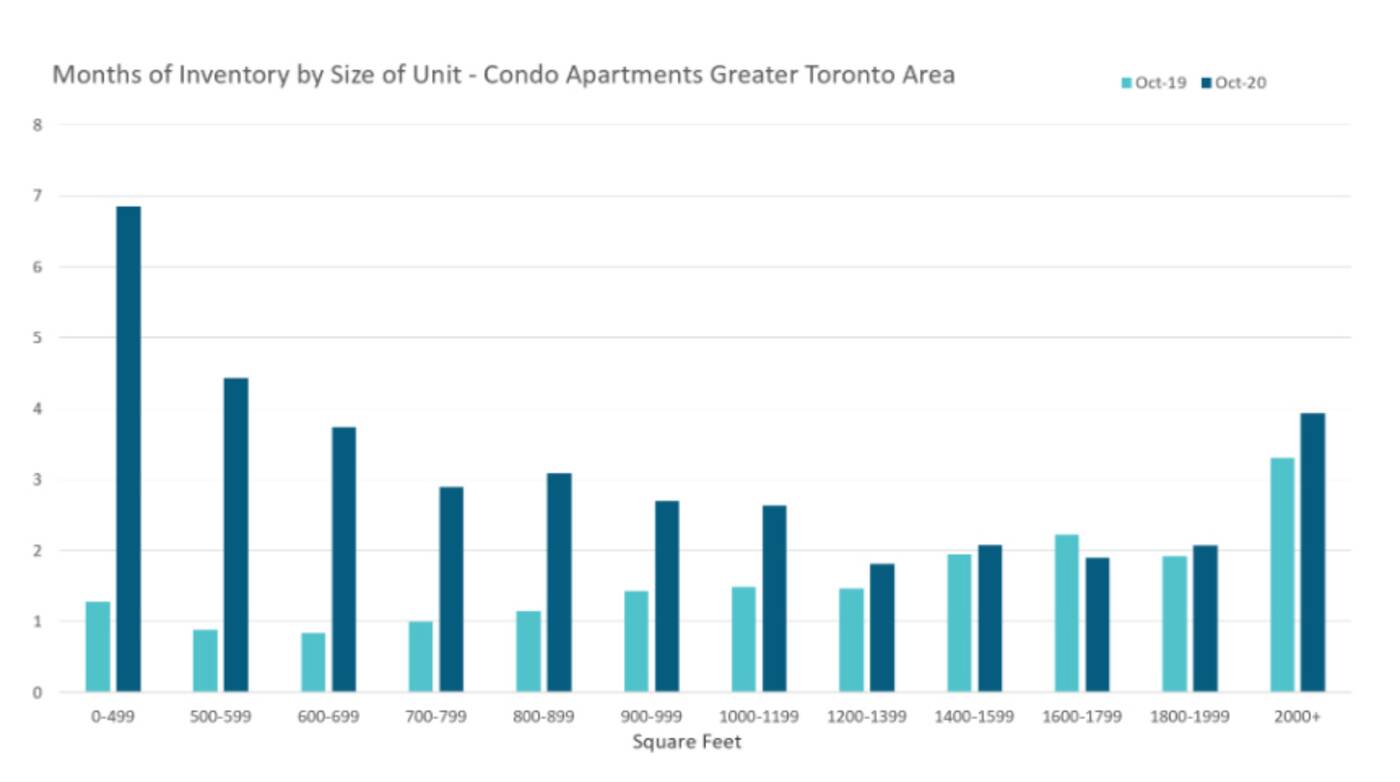 Micro-condos were by far the most-oversupplied type of unit in the GTA as of October 2020 — a sharp change from the year previous. Image via movesmartly.com.

Pasalis, like others, blames the shift away from micro-condos on "a desire for larger living spaces as more people are working from home due to COVID restrictions."

Indeed, people in Toronto are leaving their tiny homes for bigger spaces either within or outside of the city.

Landlords are selling off units too as they become less profitable thanks to high long-term vacancy rates (and harder to fill with Airbnb guests thanks to border closures.)

New condo listings were up by 79 per cent in October, according to Pasalis, which pushed the active number of condos available for sale in October up by 125 per cent, year over year.

"This spike in inventory is leading to a cooling down in the condo market with the MOI increasing from just under 2 months in July to 2.8 in October," notes the report.

"Toronto area condo prices are up 3 per cent over last year, but are down 4 per cent from the peak reached in the first quarter."

Condo prices may not have spiked as high as new listings, but at least things are turning in the right direction for prospective buyers — especially those who are cool with living in a glorified walk-in closet.