Toronto rent prices are falling the fastest in these downtown neighbourhoods

It's nearly 17 per cent cheaper to rent a condo in downtown Toronto right now than it was last year at this time — a fact that, while true, would have sounded absolutely bonkers if predicted prior to the pandemic.

And yet, here we are, closing in on the end of a year dominated by an unprecedented global health crisis, enjoying our tenth straight month in a row of declining rent prices across the GTA.

A newly-released, regional rent report from Torontorentals.com and Bullpen Research & Consulting shows that average monthly rent prices for condos in pre-amalgamation Toronto have fallen 16.9 per cent, year over year, since September of 2019. 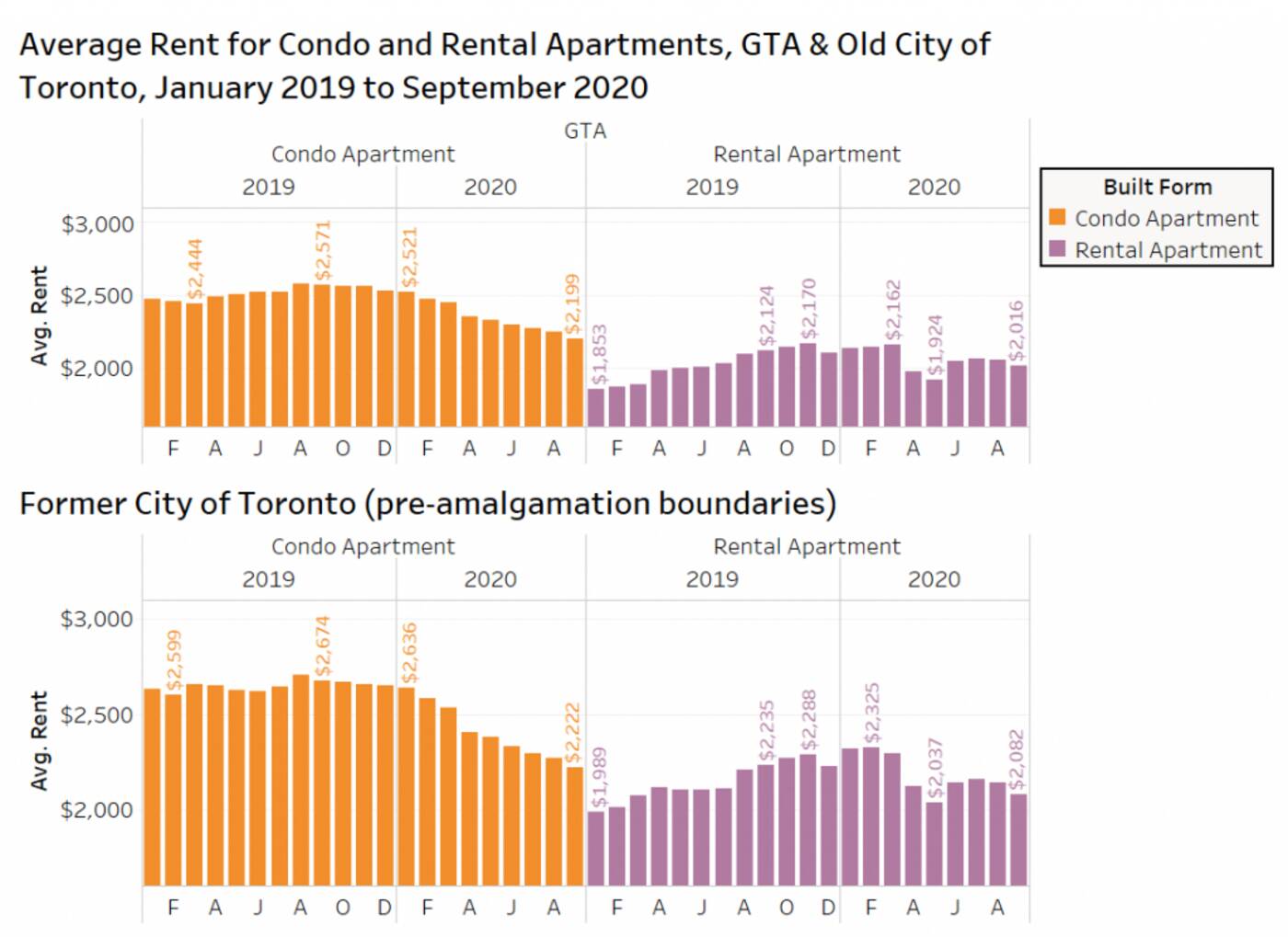 Rent prices are dropping fast across the GTA, but condos in downtown Toronto specifically are showing the greatest year-over-year declines. Image via torontorentals.ca and Bullpen Research.

The average rental price across condo units of all sizes in Toronto proper is now just $2,222, but the smallest among them (units rounded to 500 square feet or less) are posting the steepest declines thanks to dwindling demand for sky shoeboxes.

"The condo rental market in old Toronto is in bad shape (if you're a landlord)," reads the report, which notes that rental apartments have also seen prices drop by an average of 6.8 per cent annually within the city.

Rents for studio condos and bachelor apartments (read: zero bedroom units) declined by roughly 8 per cent last month, according to the report.

For context: This same market segment was actually posting rent increases of 13.8 per cent, year-over-year, when the pandemic first hit in March. 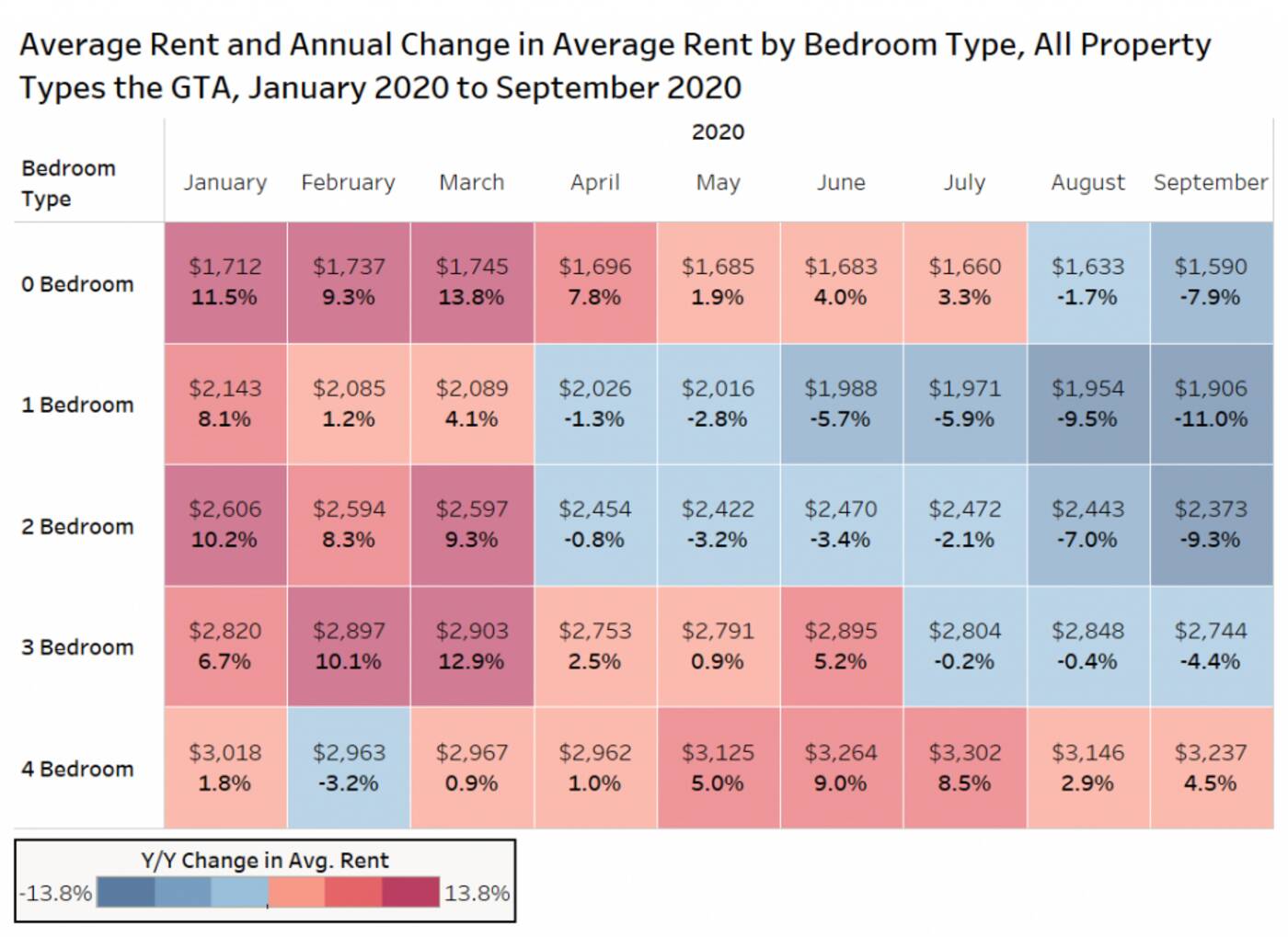 One-bedroom rents in the GTA are down 11 per cent, year-over-year, according to real estate analysts. Image via torontorentals.ca and Bullpen Research.

The work-from-home exodus is only one of the factors driving this trend, however — a surge of new listings for both condo rentals and purpose-built apartments has pushed vacancy rates up significantly across the entire GTA. 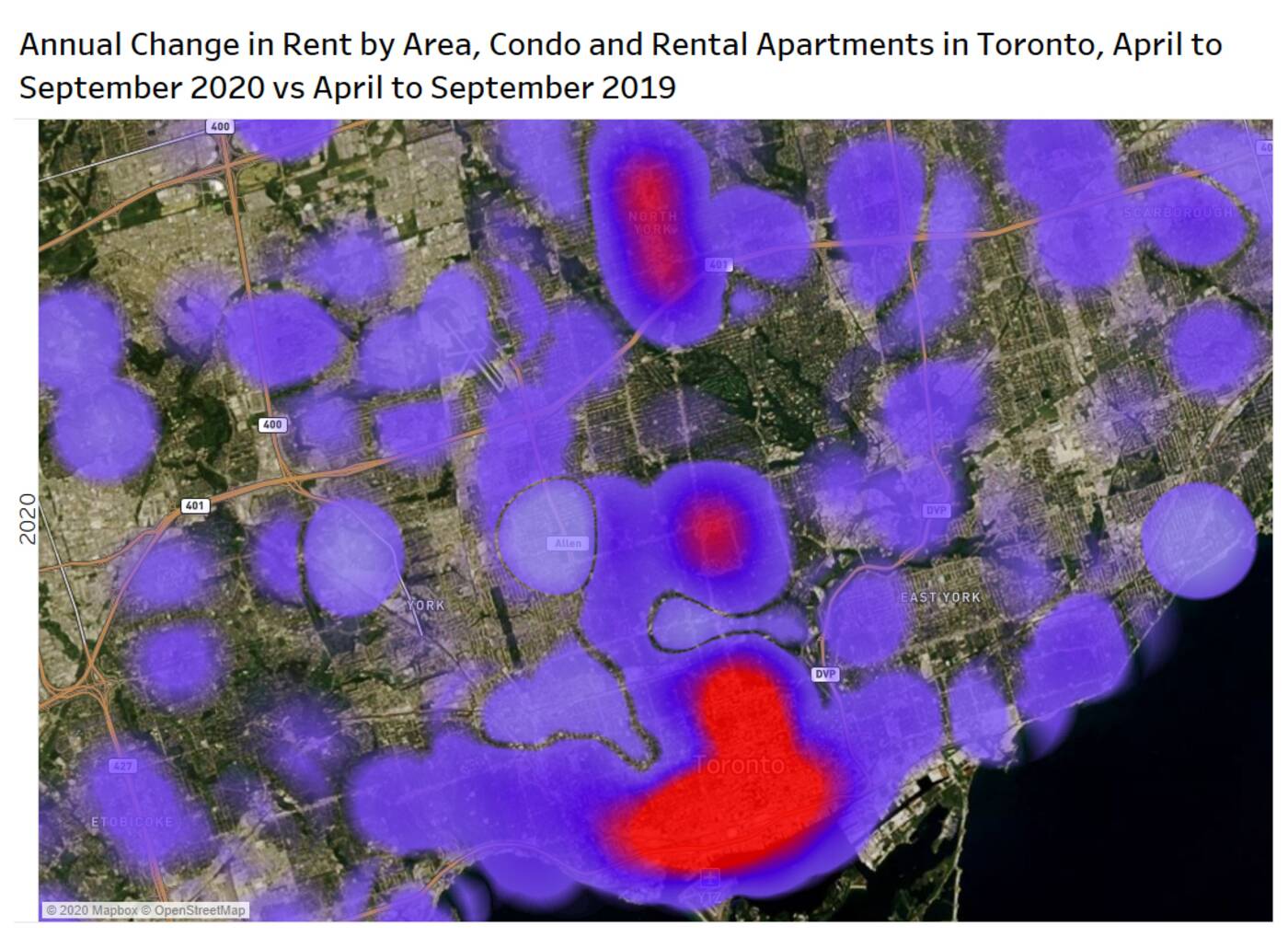 This density map looks at the change in condo and rental apartments rents by area. Red zones represent the areas with the biggest declines. Image via torontorentals.ca and Bullpen Research.

In the City of Toronto, specifically, vacancy rates shot up from 0.7 per cent in Q3 of 2019 to an absolutely staggering 2.8 per cent for the same time period this year.

"The change in listings by rounded unit size is not surprising given the rental data," write the report's authors. "Supply is way up for the smallest units, and down for three of the four largest unit sizes."

Listings for micro-suites (rounded to 300 square feet or less) increased by 253 per cent between April and September of 2020, while 400-square-foot and 500-square-foot unit listings spiked by 102 per cent and 134 per cent respectively over the same period. 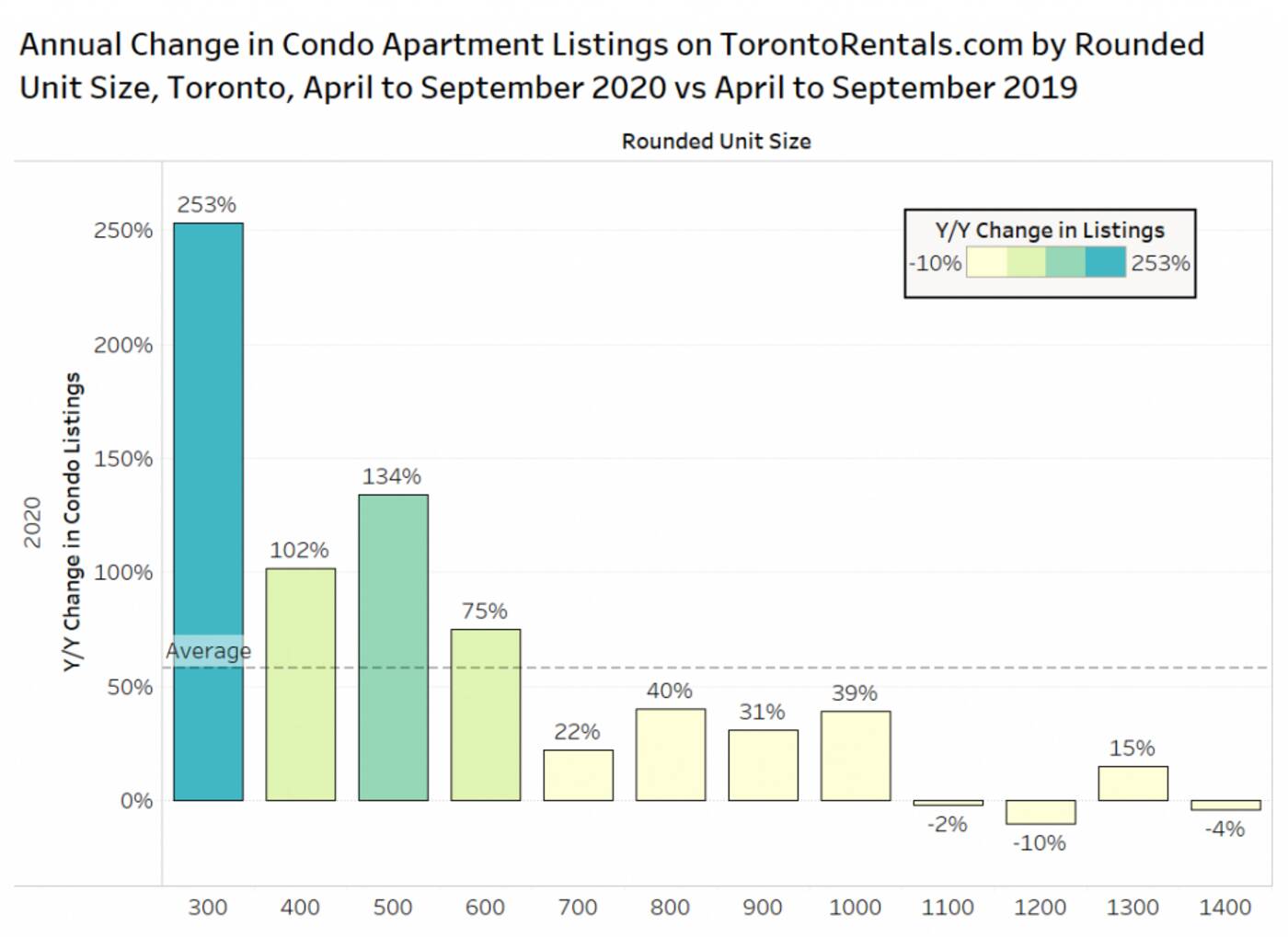 The smallest condo units in the GTA are being listed at unprecedented rates as residents search for larger spaces in which to work from home. Image via torontorentals.ca and Bullpen Research.

With the average level of rental apartments under construction in 2020 "higher than any time over the last 30 years," Torontorentals.ca and Bullpen Research predict that listings will continue to flood the GTA market, leading to even greater price declines.

So far, rent declines have been the most-pronounced in condo-dense, downtown Toronto neighbourhoods.

Hoods with notoriously high concentrations of Airbnb rental units are also among the fastest-depreciating with investors trying to sell their units or transition them to the long-term rental market as border closures keep their ghost hotels empty. 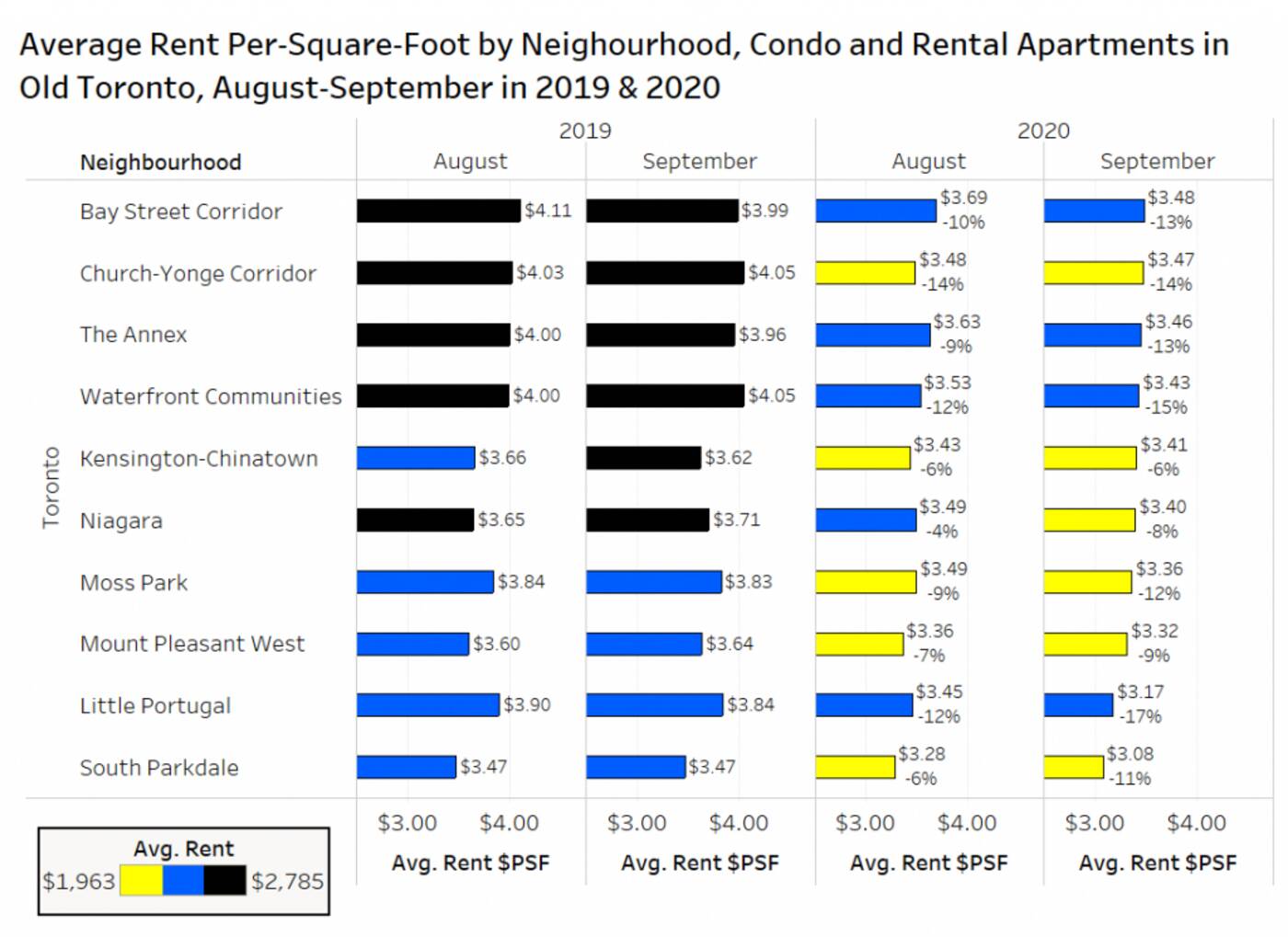 Little Portugal, the Waterfront Communities, the Church-Yonge Corridor, Bay Street Corridor and the Annex are recording the steepest rent declines in terms of price per square foot. Image via torontorentals.ca and Bullpen Research.

Ten neighbourhoods, as seen above, were selected for the analysis — all of them showing declining rents over the time period surveyed, and seven of them posting double-digit deflation rates.

Little Portugal rents fell the most. The neighbourhood marked declines of 17 per cent, year over year, while rents in the Waterfront Communities fell approximately 15 per cent.

"The smallest decline is in Kensington-Chinatown," notes the report. "Which likely has to do with the fact that there are not many new condo projects with high rents in that neighbourhood in comparison to the four areas with higher per-foot rent levels."

This under construction condo in Toronto looks like it bends backwards

Toronto home that still operates as a church is for sale

Toronto's newest rental apartments don't look anything like the others