Renting a condo in the City of Toronto is cheaper right now than it has been since early 2018, according to Urbanation, thanks in large part to skyrocketing vacancy rates brought about by the COVID-19 pandemic.

Newly-published data from the market analysis firm, which has been keeping tabs on GTA condo and rental apartment prices since 1981, show steep declines of more than nine per cent, year-over-year, in both categories.

The market rent price for a condo in Toronto, specifically, dropped by 9.4 per cent between the third quarters of 2019 and 2020, reaching an average of $2,249 per month across July, August and September.

This marks the lowest rent level seen in the city since the first quarter of 2018, more than two-and-a-half years ago.

"Within the former City of Toronto, the steepest year-over-year declines in average per square foot rents were found in the East Bloor/The Village submarket near U of T and Ryerson University (-16.8%), the Downtown Core (16.0%), the Entertainment District (-15.9%), and CityPlace (-14.3%)," notes Urbanation. 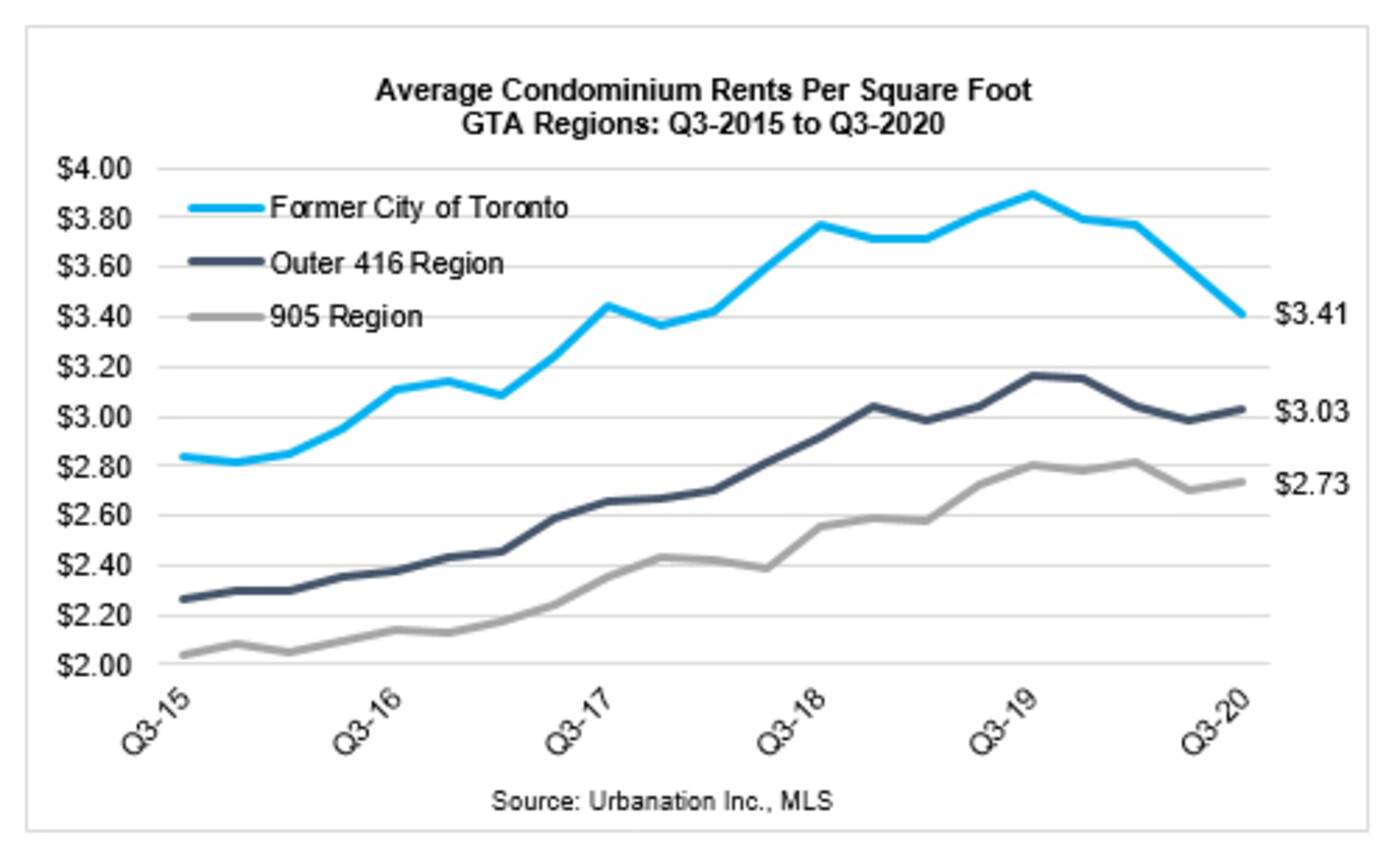 In terms of purpose-built rental apartments, monthly prices were down about 9.3 per cent, year-over-year, though analysts note that "some of the rent decline could be attributed to a decrease in the average available unit size to a record low 740 sf from 767 sf a year earlier."

While there are substantial lease-signing incentives to consider this time around, bonuses didn't factor into these rent decline calculations.

"The reported decline in rents was additional to incentives," write analysts. "Urbanation found that most rental buildings surveyed were offering incentives to attract new tenants, which mainly included one month of free rent, move-in bonuses and, to a lesser extent, two months of free rent."

Interestingly enough, the firm actually observed an increase in rental lease transactions for unfurnished condos across the GTA over the same period of time. Some 39 per cent more condos were rented out in Q3 of 2020 compared to the year previous.

Odd as this may sound given how fast rent prices are falling, it's key to note that new listings are rising at a much, much faster pace. 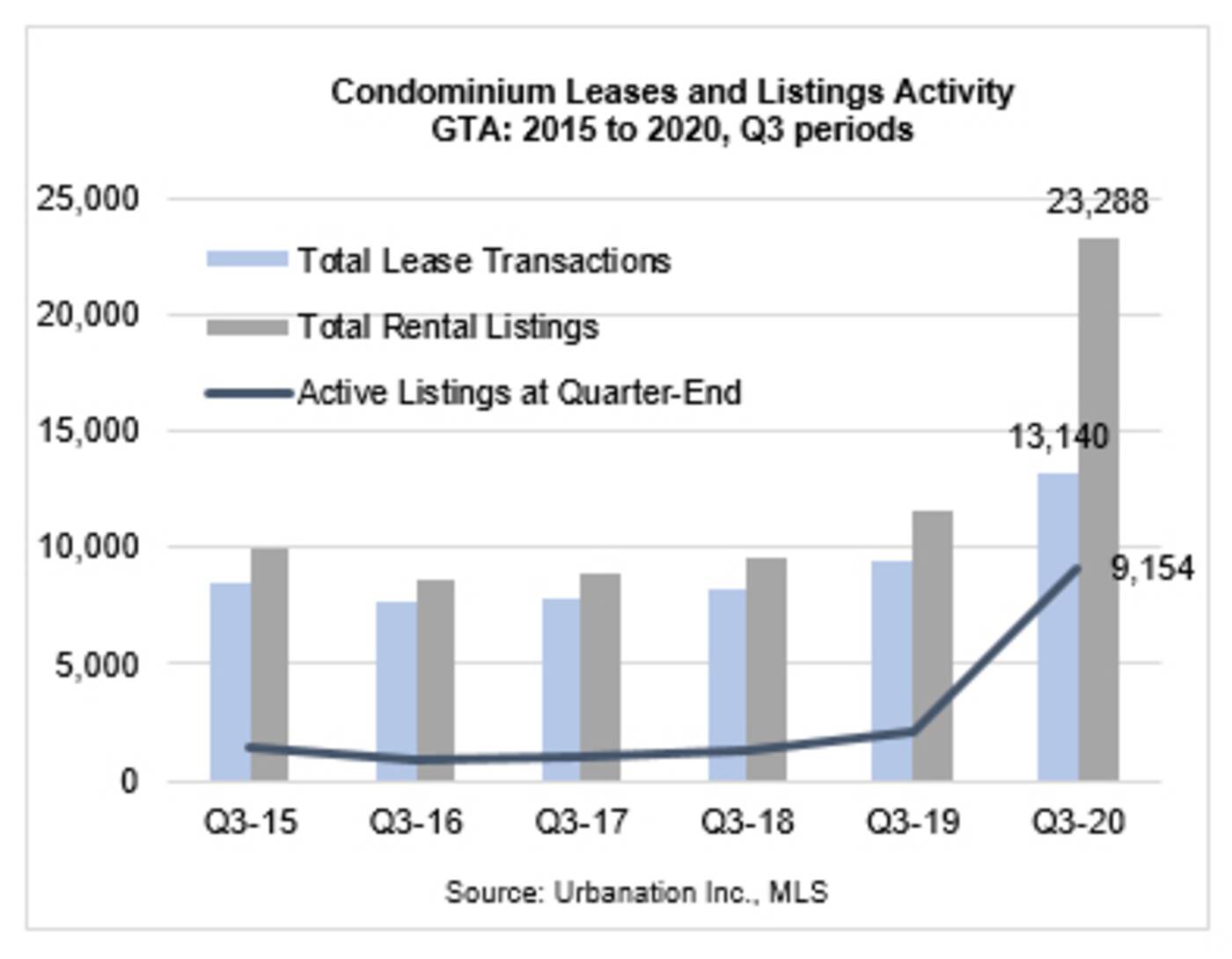 "Activity surged due to a doubling in the number of condo rentals listed for lease during the quarter to 23,288 units," writes Urbanation. "At the end of Q3, active condo rental listings totaled 9,154 units, 4.5 times higher than a year earlier."

Whether the result of young professionals fleeing the city to work-from-home in a larger, cheaper, suburban house or of investment property owners ditching their fast-depreciating former ghost hotels, this flood of new listings has impacted vacancy rates unlike anything seen over the past decade.

Vacancy rates in new buildings completed since 2005 across the GTA surpassed two per cent for the first time in 10 years last quarter, according to analysts, and vacancy rates within the former of City of Toronto specifically shot up from 0.7 per cent to an absolutely staggering 2.8 per cent year-over-year.

"The GTA rental market showed some improvement in the third quarter within more suburban areas, while experiencing weakened conditions in the downtown areas as renters reevaluated the costs of living in the central core as most offices, post-secondary schools and entertainment venues remained closed," says Urbanation President Shaun Hildebrand.

"While it was encouraging to see the large increase in lease activity in the third quarter as renters took advantage of recent discounts, the market will continue to face challenges heading into 2021 from restrained demand caused by COVID-19 and elevated supply levels."