It's now half a year since the COVID-19 pandemic hit Toronto in earnest, throwing all of our lives and the city's real estate market into disarray.

Home prices, which never really faltered, are only going up and up and up as pandemic restrictions lift. Rent prices, on the other hand, continue to sink like a magical stone.

The newly-released September 2020 National Rent Report from rentals.ca and Bullpen Research & Consulting now puts the average monthly price of a one-bedroom apartment in Toronto at just $2,013 — down 1.3 per cent from the month previous and a walloping  13.8 per cent, year over year.

Two-bedroom rents fell 8.9 per cent over the past year but actually increased month over month by about 1.2 per cent to hit an average of $2,655.

Toronto remains the most expensive city in Canada for one-bedroom rental units as of September 2020, while Vancouver still wears the crown for priciest two-bedroom units at an average monthly price of $2,709.

One interesting trend to note in terms of national rent prices is where Vancouver now falls on the list of one-bedrooms compared to smaller GTA cities: Canada's third-largest city, which has long either tied or narrowly fallen behind Toronto for rent prices, now ranks sixth on the national list. 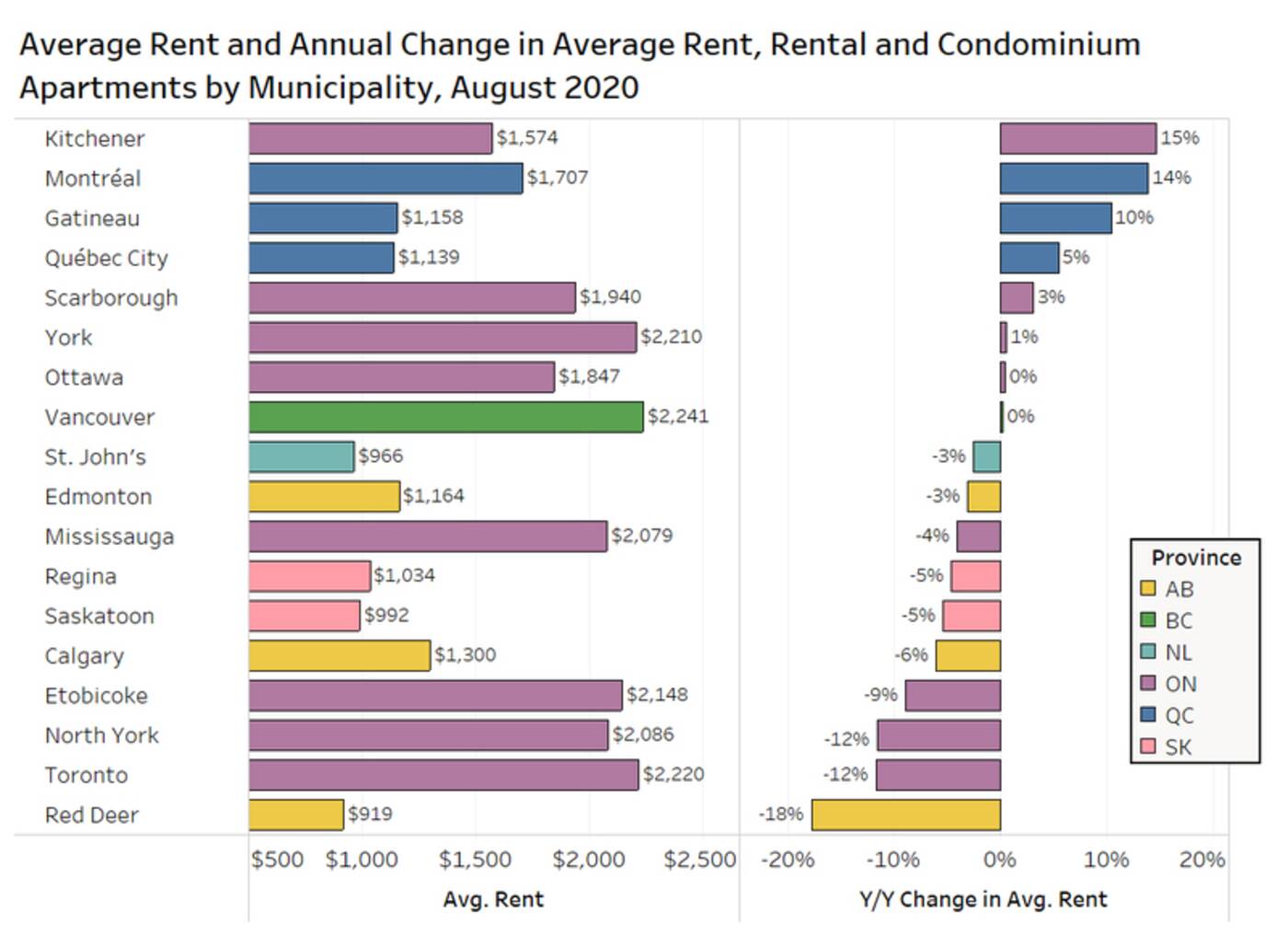 As of right now, it costs more to rent a one-bedroom apartment in Etobicoke, Mississauga, Burlington and Oakville than it does in Vancouver, suggesting that analysts are correct when they blame the rent dive (in part) on people vacating Toronto for larger, cheaper places within a driveable radius.

For downtown dwellers, this mass exodus has been great. Higher vacancy rates mean a better selection, better prices and better perks from landlords. We're not complaining — only waiting to see how long this all lasts.

History has taught us not to get our hopes up, especially after travel restrictions lift and Airbnb-lords turn their unoccupied long-term units back into ghost hotels.

"There are a number of factors pushing down rent in Toronto: newly completed condo supply, the return of short-term rentals to the long-term market, less immigration, fewer students downtown, lower job growth, lower demand in centrally located buildings, and the working from home phenomenon has allowed some tenants to move to cheaper areas of the GTA and the province," reads this month's National Rent Report.

According to rentals.ca and Bullpen, the average rent for a condo in Toronto right now was more than $400 cheaper in August of 2020 than it was in August of 2019.