Toronto rent prices are down a whopping 20% since last year

Last year at this time, real estate analysts were reporting an eight per cent year-over-year increase in average rent prices across the City of Toronto, causing tenants in rent-controlled pads to further tighten their grips on units that were perhaps too tiny, too crowded, and sometimes in dire need of repairs.

Boy, how the tables have turned.

The newly-published 2020 December National Rent Report from Rentals.ca and Bullpen Research & Consulting indicates that the global coronavirus pandemic continues to wreak havoc on Toronto's rental market (for landlords, at least) with another steep dip in average prices recorded last month.

To put it even more starkly, you'd be saving an average of $520 per month if you rented a place in Toronto right now versus if you signed a lease last year at this time. 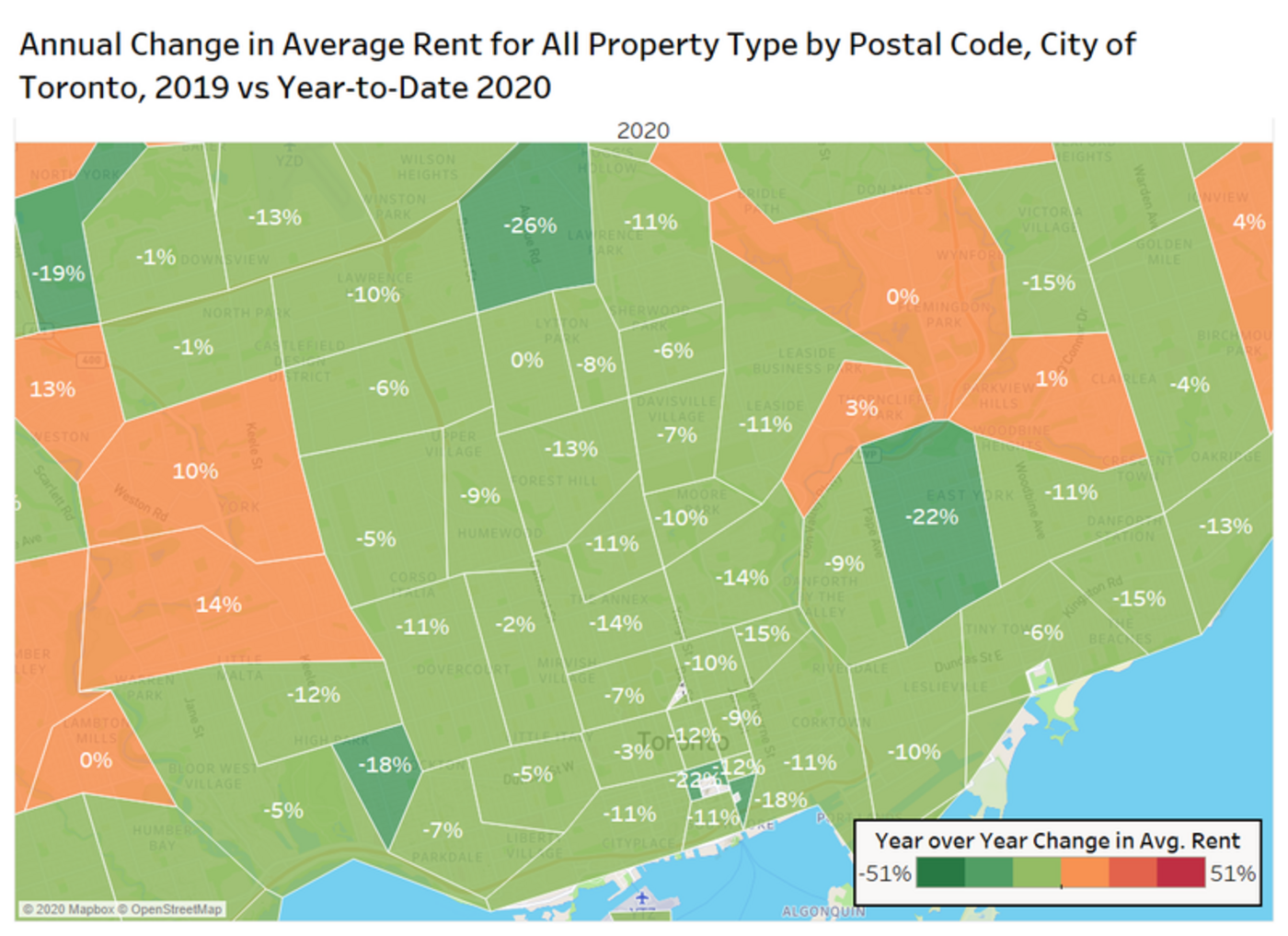 Every postal code within the City of Toronto has experienced either flat or declining rent prices over the past 12 months. Image via rentals.ca.

"2020 has been the most unpredictable year of my nearly 20-year career as a housing analyst," said Bullpen Research & Consulting President Ben Myers when releasing the report on Sunday.

"It is unlikely that even the most bearish market watcher would have predicted a 20 per cent annual decline in average rents in the former city of Toronto. We expect the market to continue trending downward for the next four to six months nationally but start a slow recovery in the second half of 2021."

While these trends are being observed on a national level, large urban markets like Toronto and Vancouver have been leading the pack in terms of price drops.

"The rental market in Canada has done a 180-degree turn from extremely hot to extremely cold, with November 2019's average rent of $1,918 per month up 9.4 per cent annually, compared to this year's decline of 9.1 per cent," write the report's authors of Canada as a whole.

"The national figures are heavily influenced by what is happening in the Greater Toronto Area, where rental rates for condominium apartments have plummeted year over year." 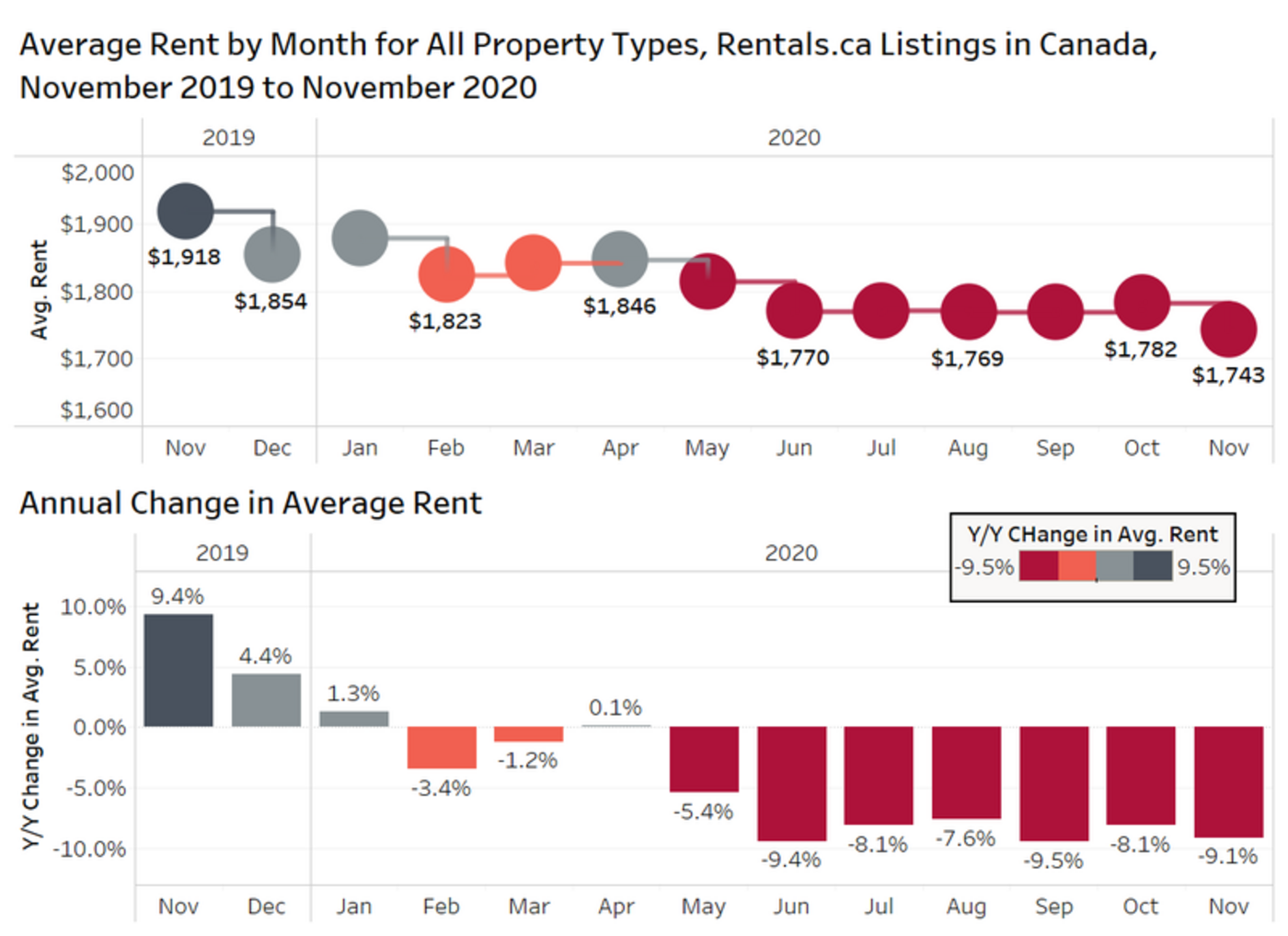 Analysts say the average drops in rent prices across Canada have been driven in large part by Toronto and Vancouver, which have been affected by a lack of immigration, fewer students renting, and fewer new graduates renting their first properties. Image via rentals.ca.

Toronto remains the most-expensive of 35 major Canadian cities for one-bedroom rental units, with the November 2020 average coming in at $1,877. Two-bedroom units in Toronto are now going for an average of $2,468 per month.

"Tenants looking for properties in urban settings in Canada had more choices in 2020, and for the first time in many years, landlords had to compete for renters and ramp up their marketing efforts," said Rentals.ca CEO Matt Danison. "We expect to continue to see incentives for the most expensive properties in the market."

"The decrease in demand will be met with an increase in supply, with more apartments (all tenures) expected to be completed in 2020 than any time over the last 30 years," notes the report.

"A crackdown on short-term rentals in the city of Toronto, plus the potential for a vacant homes tax will only increase supply further in Canada's largest rental market."