After plummeting every single month for more than a year due to the health crisis and resulting lockdown measures, travel and other restrictions, Toronto rent prices have been making a rocky recovery back to their typically pricey selves, though extremely inconsistently.

The start of 2021 saw rents continue to fall month-over-month and quite substantially year-over-year, but the spring and summer have thus far showed less clear trends as prices in some areas and/or for some unit sizes slowly increased while others crept downwards still.

Based on the latest data from June, courtesy of Rentals.ca’s and Bullpen Research & Consulting’s latest National Rent Report, this inconsistency is persisting.

Figures show that Toronto was split down the middle, with 10 of 20 neighbourhoods examined seeing average rent gains month-over-month and the other half seeing declines, albeit marginally in both cases, for the most part.

The Yonge-St. Clair area saw the highest spike of seven per cent month-over-month to $2,112, while in Mount Pleasant East, rent costs fell the most: four per cent compared to May, to $1,738.

Some neighbourhoods remain at least a little cheaper, such as Cabbagetown-South St. James Town, which had the cheapest overall rent of $1,662 across all unit types, down month-over-month.

Rosedale-Moore Park was the priciest, at $2,384, on average, which marks a one per cent drop from the previous month. 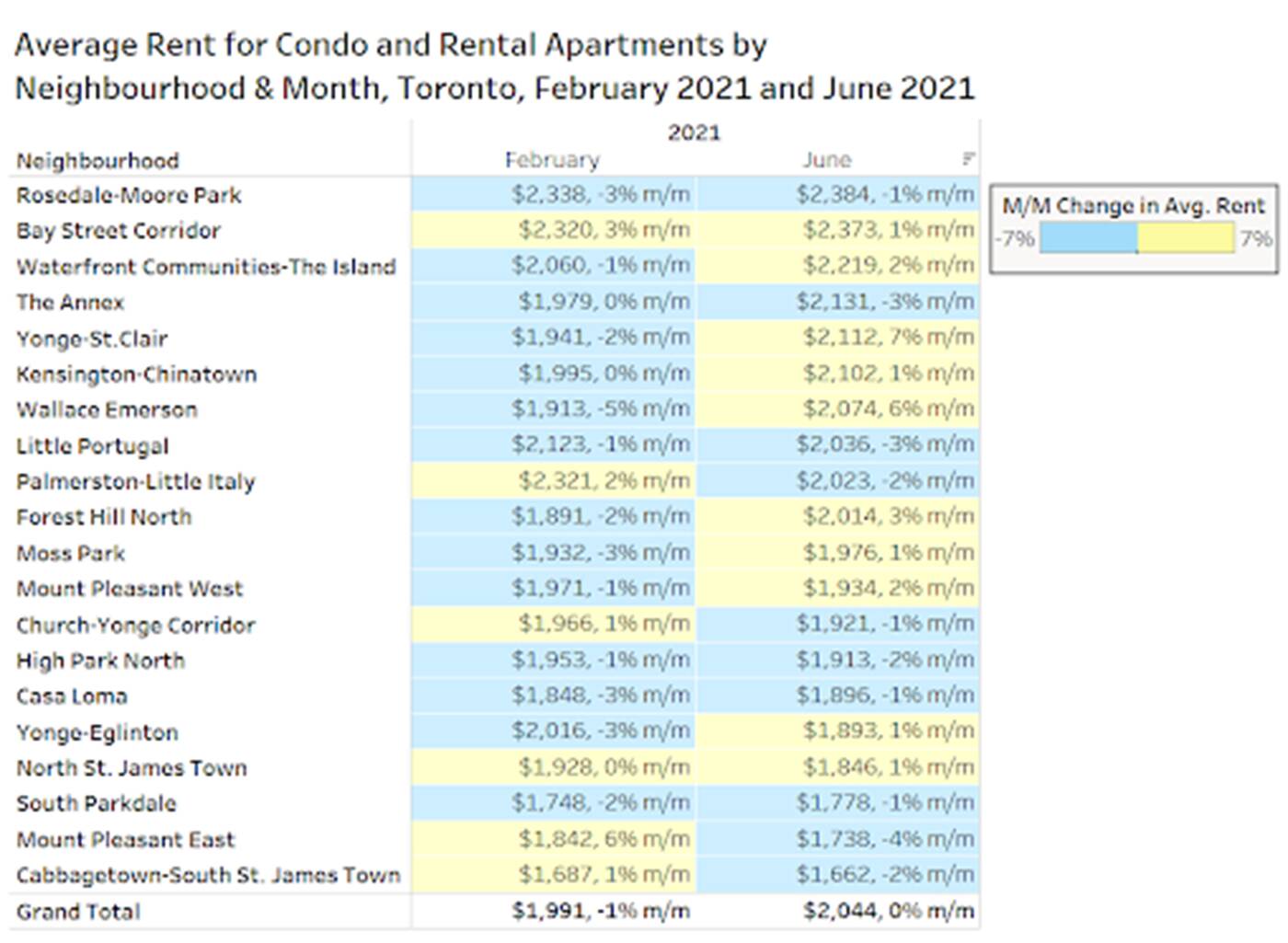 Looking at the city overall, a general trend of a gradual increase in average rent prices has continued for three consecutive months now, though year-over-year, the market is still very far off from where it was pre-COVID.

This is in part due to a mass exodus from the city, drastically reduced immigration and a lack of international students, new Airbnb rules, and impacts of the real estate market leaking over to the rental one as investors scrambled to sell off condo units last year.

In June, rent prices in the city were, on average, $135 cheaper than June of 2020, though this varies based on unit size, with three-bedrooms being peculiarily popular in both Toronto and nationwide lately.

In speaking about Canada's rental market overall post-COVID, the experts say in the report that "after unprecedented declines during the pandemic, the domestic rental market is in recovery mode with many of Canada’s largest cities seeing rent growth accelerate in June."

"Unit showings are picking up, vacancies are declining and tenant demand is strong again in major downtown markets. However, it still could take eight to 15 months before most markets get back to their peak rent levels from late 2019."