Toronto's rental market has officially made it out on the other side of the COVID-19 induced blow during which the city saw record high vacancy rates and tumbling rent prices for more than a year straight.

The effects — along with things like new Airbnb regulations — leaked over to the housing market, and meant that investors were scrambling to ditch condos while prices and sales volumes fell.

Though it was hard for the markets to weather, the phenomenon was a joy for both tenants and prospective condo owners in the city, which had become untenably expensive, outpacing cities such as London and San Francisco for buyers and Vancouver for renters.

According to the latest numbers, condo prices and sales are indeed recovering again after Toronto's pandemic lull — and so are rent prices for various different property types.

The latest GTA Rent Report from Bullpen Research & Consulting  and TorontoRentals.com shows that rents across the region hit an average of $1,999 for all unit sizes last month, which is an increase from the month prior, albeit by only $22.

Based on price per square foot, this translated to a 2.2 increase since the beginning of the year, when prices hit a rock bottom. But, prices are still notably below averages from the same time last year — down 11.4 per cent — despite the fact that the health crisis was in full swing in May 2020. 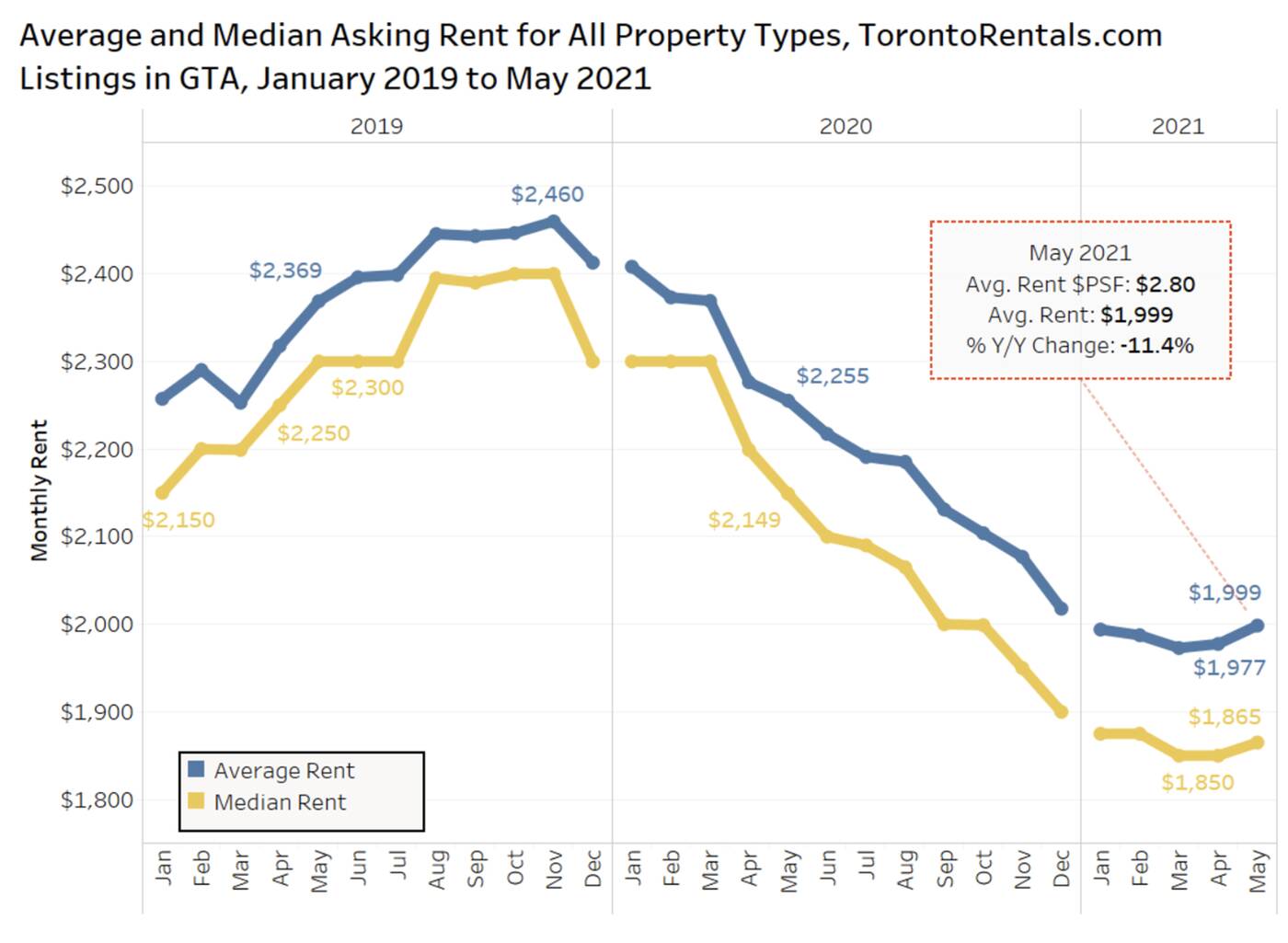 Still, the trend is going upwards, with the expectation that it will continue to do so as things like immigration and long-term travel (for international students in particular) ramp up again during our gradual reopening.

It's been slow-going from March 2021 onwards, but the pattern is there, as is the forecast from professionals in the industry.

"The rental market in the GTA has turned a corner and is trending back up again; bad news for tenants, and good news for landlords," Bullpen's president stated in the report.

"With Toronto entering the next stage of reopening, tenants will be reminded of the benefits of a centrally located apartment or condominium rental... We expect an increase in leasing activity as tenants look to take advantage of the current incentives at many buildings before they disappear." 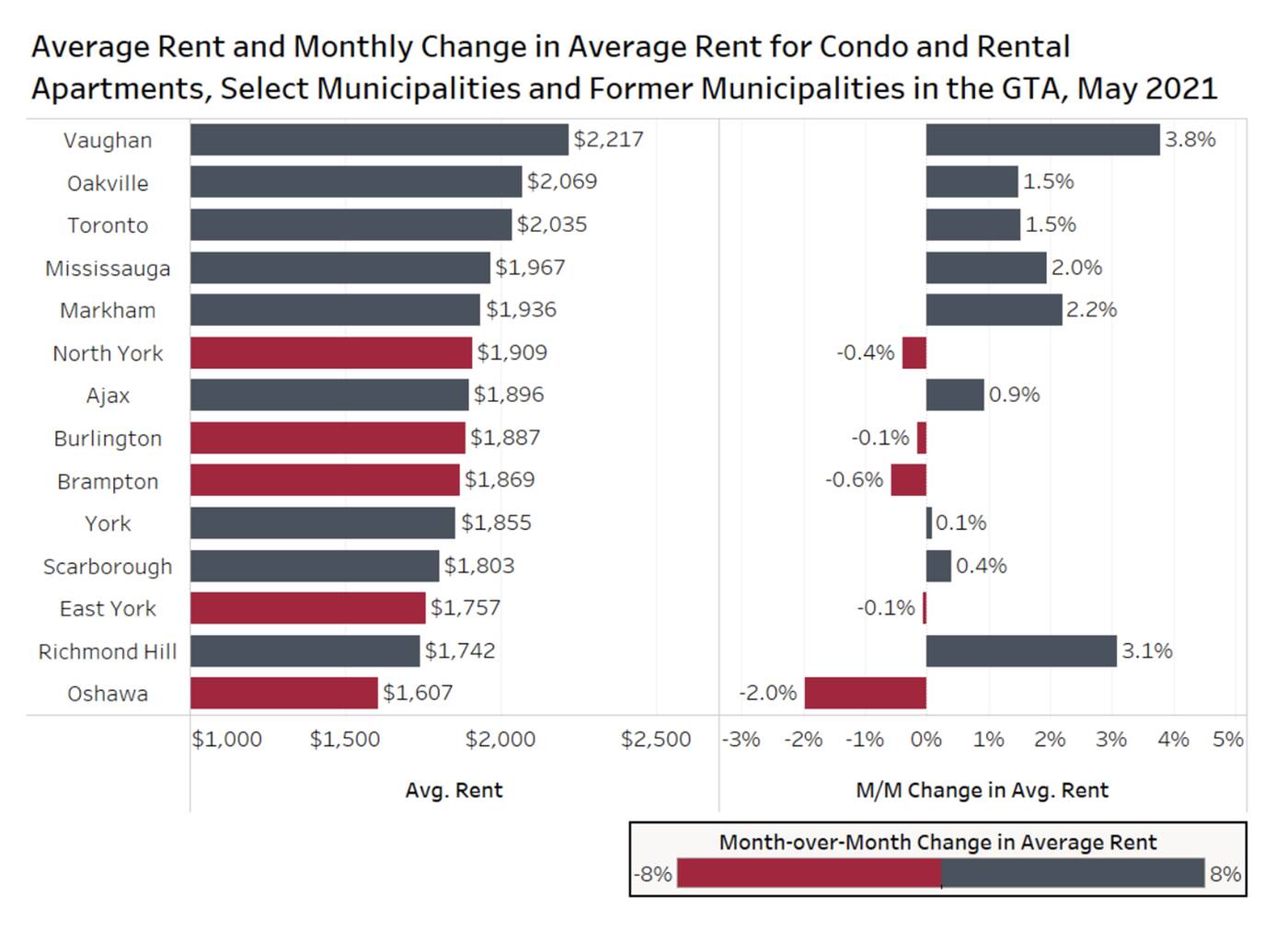 Different parts of the region are notably rebounding faster than others, though, with rents in suburbs like Vaughan, Richmond Hill and Markham rising at a quicker pace than downtown Toronto proper.

Apartments listed on Rentals.ca in May that were located in North York, East York, Burlington and Brampton were the only outliers, with average rents continuing to trend downward, month-over-month.

Within Toronto itself, areas on the periphery of the core — like those in the North East and West, such as Glen Park, Leaside, and Kleesdale-Eglinton West — saw the biggest hikes from April to May.

A few popular downtown neighbourhoods like Leslieville, Deer Park,  and Kensington-Chinatown and Forest Hill saw drops of up to 9 per cent. 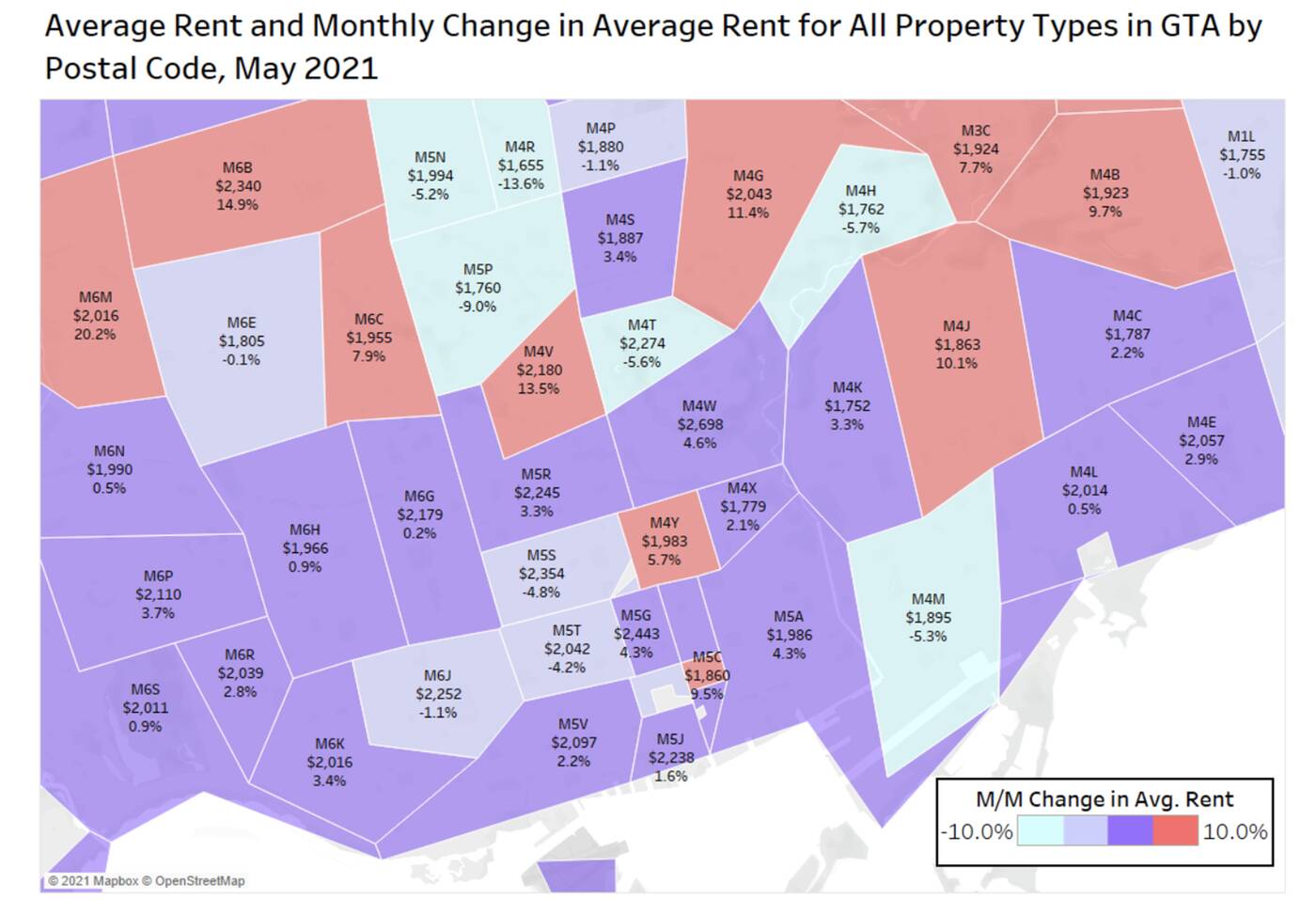 Anyone looking to move that is still able to find a deal and/or of some of the great rental incentives out there right now should do so quickly, as the report notes that "several American cities are reporting strong lease-up activity over the past two months."

"With the Canadian vaccine rollout improving, the Toronto market might be only two to three months behind, with a big pick-up in leasing activity expected in the fall."