After 15 consecutive months of watching rent prices go down in Toronto, you had to have figured it was only a matter of time before the market bottomed out.

Like it or not, that time appears to be here — though with an incredibly modest month-over-month increase of just 0.3 per cent, it's safe to say average rents in Canada's largest city aren't quite on the upswing yet.

A new report from Rentals.ca and Bullpen Research & Consulting shows that the average rent prices for condos and apartments of all sizes across Toronto was $1,987 as of March 2021 — a decrease of roughly 19 per cent (or $467 lower) since last year at the same time, but up just a tiny skitch from what we saw in February of 2021.

While rent prices are still way lower than they have been in years, this month-over-month increase is significant in that it marks the first time since December of 2019 that average monthly rents actually went up in Toronto. 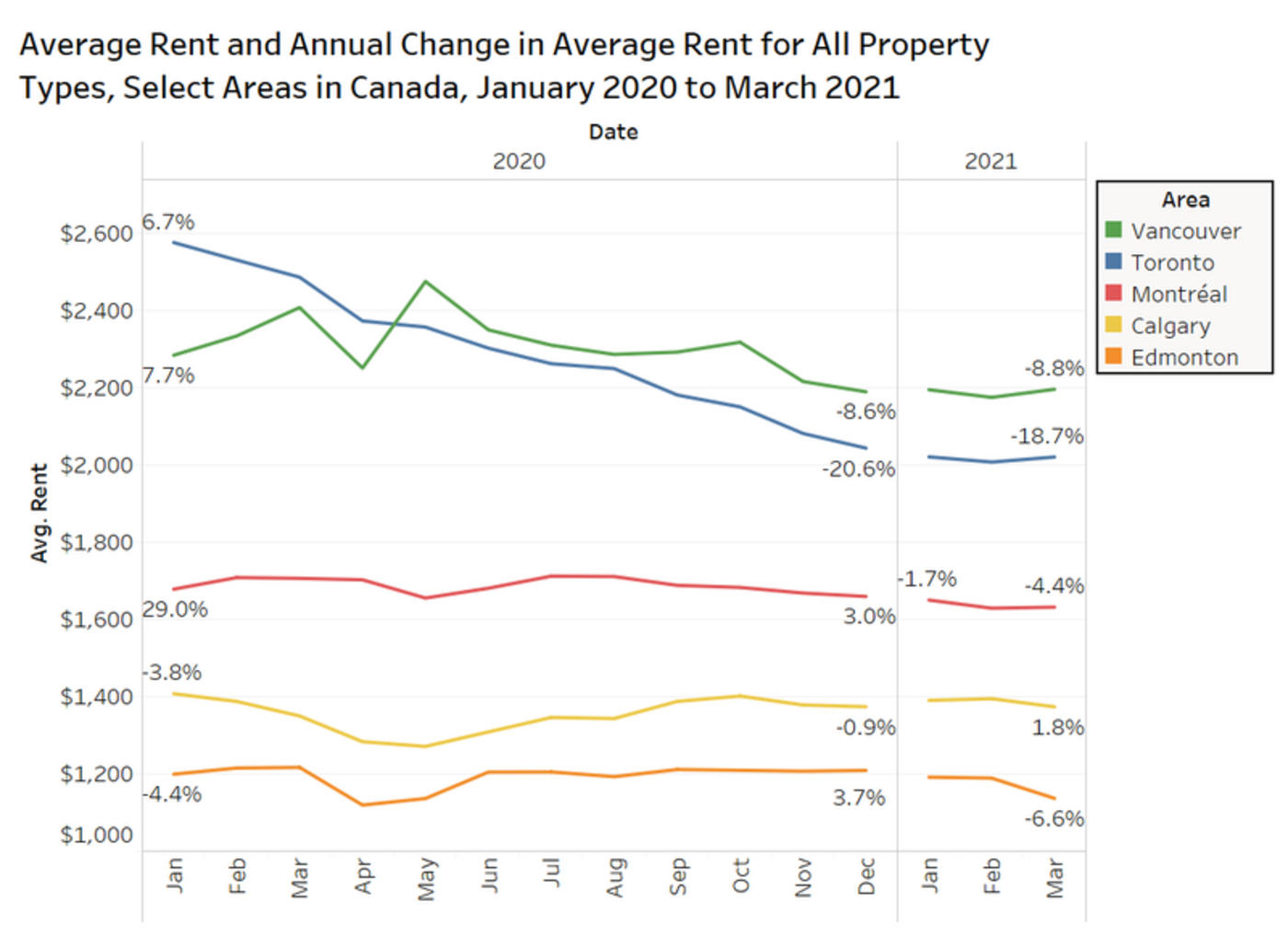 "Despite the drop in rent on a national level, there are signs the rental market has bottomed out, with monthly rent increases in Vancouver, Toronto and Montreal," said Bullpen Research & Consulting president Ben Myers in a release accompanying the April 2021 Rent Report on Tuesday.

The fractional increase in month-over-month rent prices for Canada's largest cities is still far outweighed by the significant year-over-year declines experienced (in Toronto by 18.7 per cent, Vancouver at 8.8 per cent, Edmonton at 6.6 per cent and Montreal at 4.4 per cent.)

It's still a trend worth paying attention to — as is the overall composition of units being rented out right now based on their size. 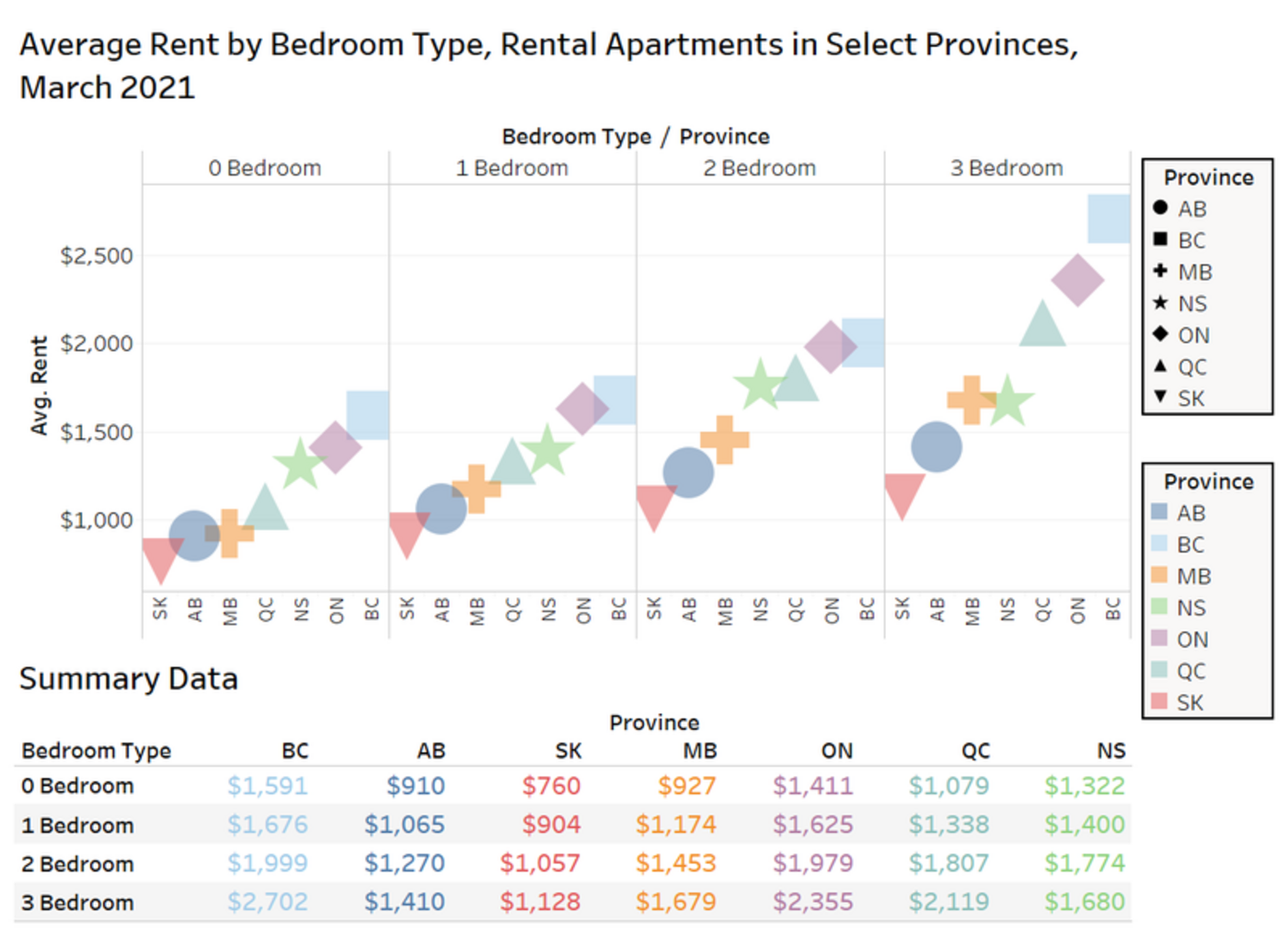 One-bedroom units are more comparable in price across provinces, but rates for larger units vary widely from coast to coast. Image via rentals.ca.

"There are a large number of smaller condos for rent in Toronto and Vancouver in 2021 versus 2020, which has contributed to the rise in the median rent per square foot on a national basis, and a decline in the average rent," reads the report.

"The composition of listings can have a big impact on the average and median results on a monthly and quarterly basis, as smaller units have experienced less demand in the work-from-home era, contributing to their increase in listings and increase in rent per square foot."

Looking at median rents across the country, the report's authors found that "all bedroom types experienced a slight increase" between the first quarters of 2020 and 2021 — save for one-bedrooms.

One-bedroom units, on the other hand, saw a median rent decrease annually by 6.1 per cent, or roughly $100 per month. 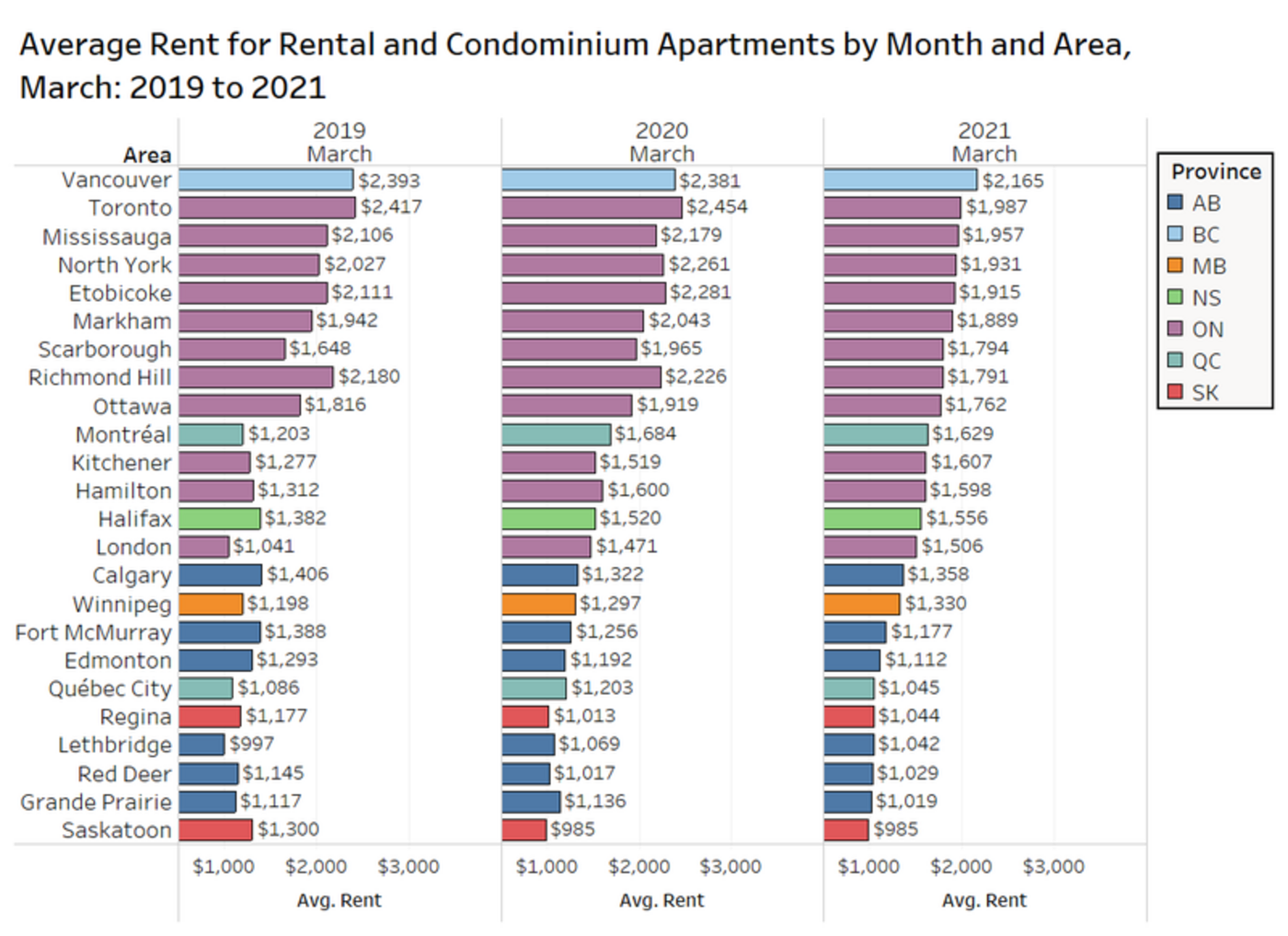 Average rents remained down in most of Canada's major 35 cities compared to the year previous as of March, 2021. Image via rentals.ca.

"Median rent levels by bedroom type show that studios, two-bedroom, three-bedroom and four-bedroom properties have all increased year over year, suggesting that outliers have had a big impact on the averages, and the market might look a little different from what some of the data suggests," reads the report.

"As the work-from-home phenomenon persists, renters continue to look for larger units for a home office, which has resulted in more smaller units being listed on Rentals.ca pulling the average rent down."

In other words, a surplus of cheap and tiny one-bedroom condos has been helping to drive Toronto rent prices down in general since the pandemic first hit and inspired people to flee the city for more space.

Once COVID-19 is under control and demand increases for smaller units in the downtown core once again, it's quite possible that average rents will follow suit — and the experts at Realtor.ca and Bullpen think that could happen soon.

"Anecdotal evidence from leasing agents suggests that rental demand could be increasing in the downtown areas of Canada's major cities," reads the report, "as tenants look to get in at the bottom before rents rise in conjunction with the rise in vaccine distribution."

Toronto's housing market is facing its deepest decline in 50 years