If, like many Toronto residents, you've begrudgingly accepted the fact that you'll never be able to afford a home here and will thus be renting forever, the pandemic offered a slight reprieve from sky-high rents that hit an average of more than $2,500 a month pre-COVID.

Though rents fell month-over-month for more than a year straight as investors scrambled to sell off condos, the market became flooded with former Airbnbs and vacancy rates hit record highs, things are slowly recovering, as all aspects of the economy area.

As of this month, the city is back to bidding wars for rental units as prices creep back up, especially in certain neighbourhoods, while others remain a bit more affordable.

Here's why rents are rising faster in some Toronto neighbourhoods than others https://t.co/XSBoEBITSx #Toronto #TorontoRealEstate #RealEstate

According to the latest data for August, this trend is continuing, albeit slowly in some GTA locales than others.

Rentals.ca's latest Rent Report shows that though rent prices pale in comparison to even the same time last year, when the pandemic was in full effect, figures are still rising each month, with the average rent for two-bedroom apartment in Toronto increasing by 4.2 per cent over July to hit $2,606, and a one-bedroom, by 1 per cent to reach $1,855.

This puts Toronto, as usual, in the second spot for most expensive rent in the country, preceded only by Vancouver, with condo rentals in particular spiking hard in both cities after a very tough year. Etobicoke and Mississauga were also in the top five this month. 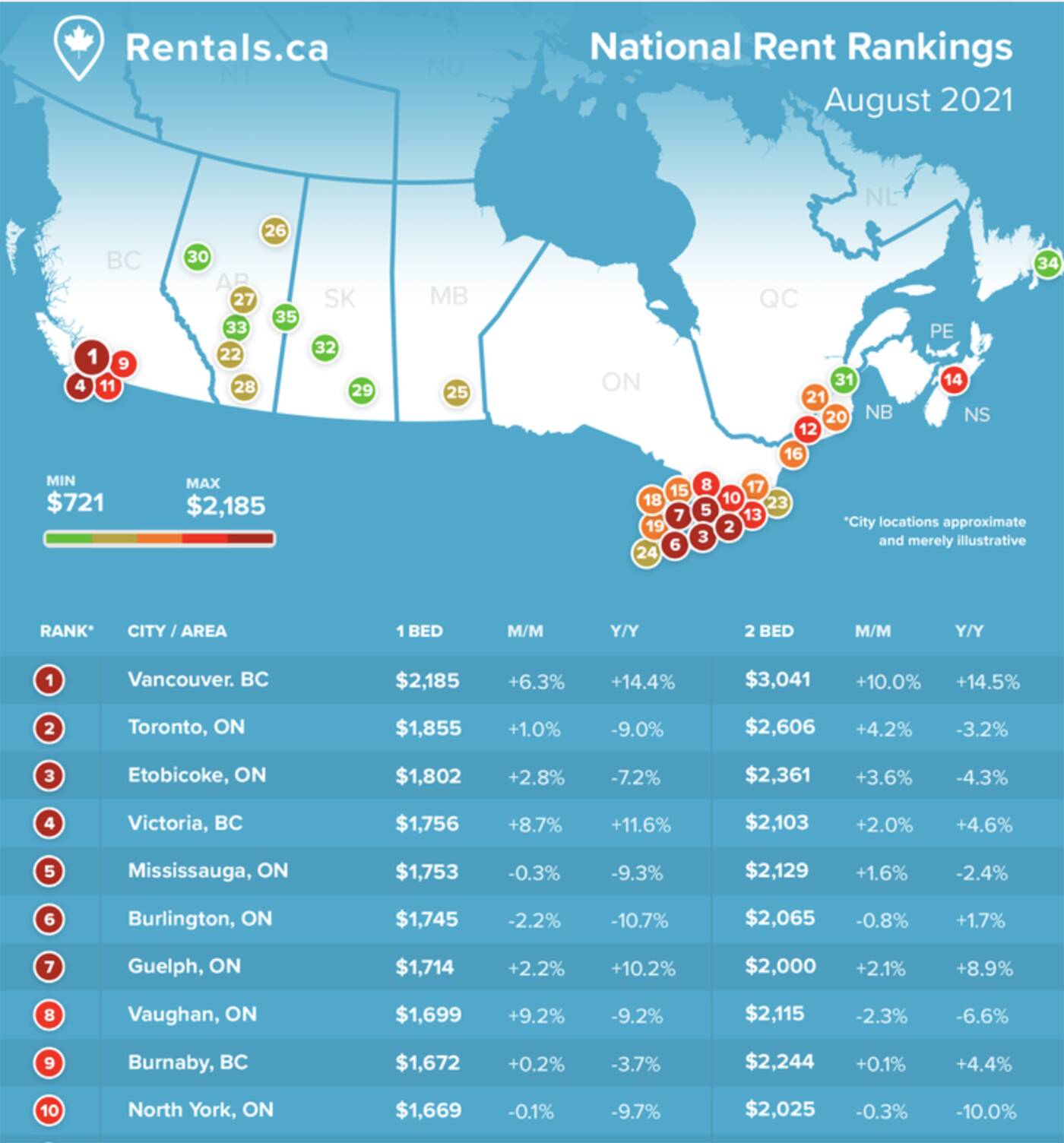 The top 10 most expensive places to rent a one- or two-bedroom apartment in Canada as of August. Chart from Rentals.ca's National Rent Report for August 2021.

Luxury rentals, too, have seen a huge jump, with the most expensive apartments on the rental market increasing in price at the highest rate, though the experts note that while "the most 'affordable' units have not increased as fast as the most expensive units in the market... it is only a matter of time before the lower end of the market gets pulled up."

These patterns are echoed by Bullpen Research & Consulting and TorontoRentals.com's newest Toronto GTA Rent Report, which says that rents in the GTA at large have been steadily on the upswing for four consecutive months, with Toronto proper leading things with a 4.7 per cent month-over-month increase in August.

"Leasing agents have reported bidding wars on prime rental suites, and suites in new purpose-built apartments are leasing at a quicker rate than last year," the firms note.

"Barring a setback from the Delta variant, the GTA rental market should continue to see a steady rise in rents as Toronto and the rest of the country continue to awaken from their COVID-19 hibernation." 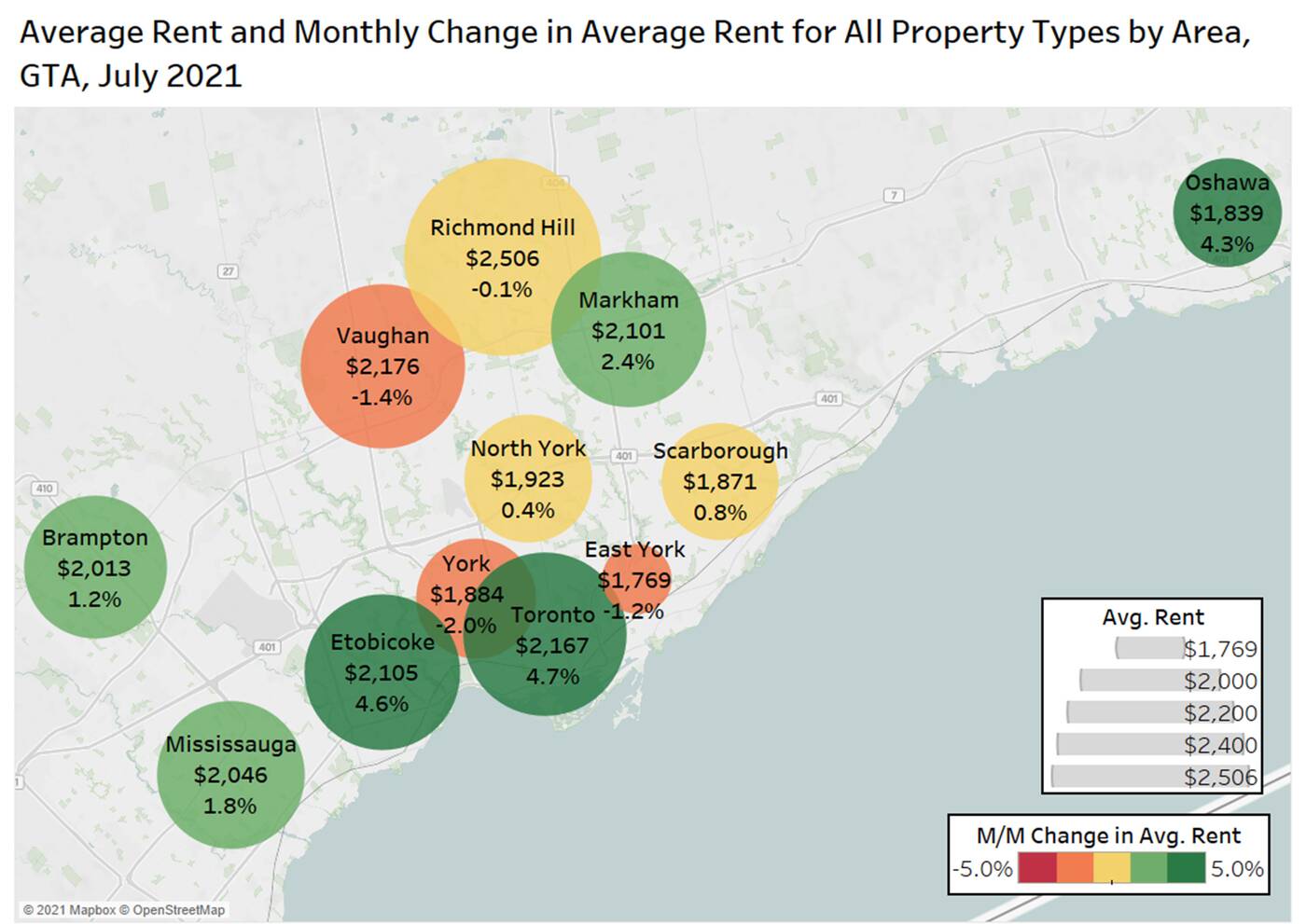 Those who find rents in the city too expensive can, as countless prospective homeowners have done, flee to other parts of Southern Ontario in the face of exorbitant living expenses downtown — though you may not want to try your luck in Barrie, St. Catharines or Windsor.