There's truly never been a better time to be looking for a condo or apartment to rent in Toronto... save for like, four months ago... or the latter two thirds of 2020... and many decades pre-dating 2010.

Average rent prices are in fact on the rise (though just slightly) after more than a year of unprecedented declines caused by the COVID-19 pandemic. We can thank soaring vaccination rates, falling case counts and the imminent reopening of offices for an uptick in demand driving this trend.

That said, as newly-published research from Bullpen Research & Consulting and TorontoRentals.com shows, the average monthly rent across the GTA for June was still about nine per cent lower (or $200) than it was last year at this time.

Compared to the previous high peak — $2,461 in November of 2019 — rent prices are still about $440 dollars less on average, hitting a new rate of $2,017 across all property types in the region last month. 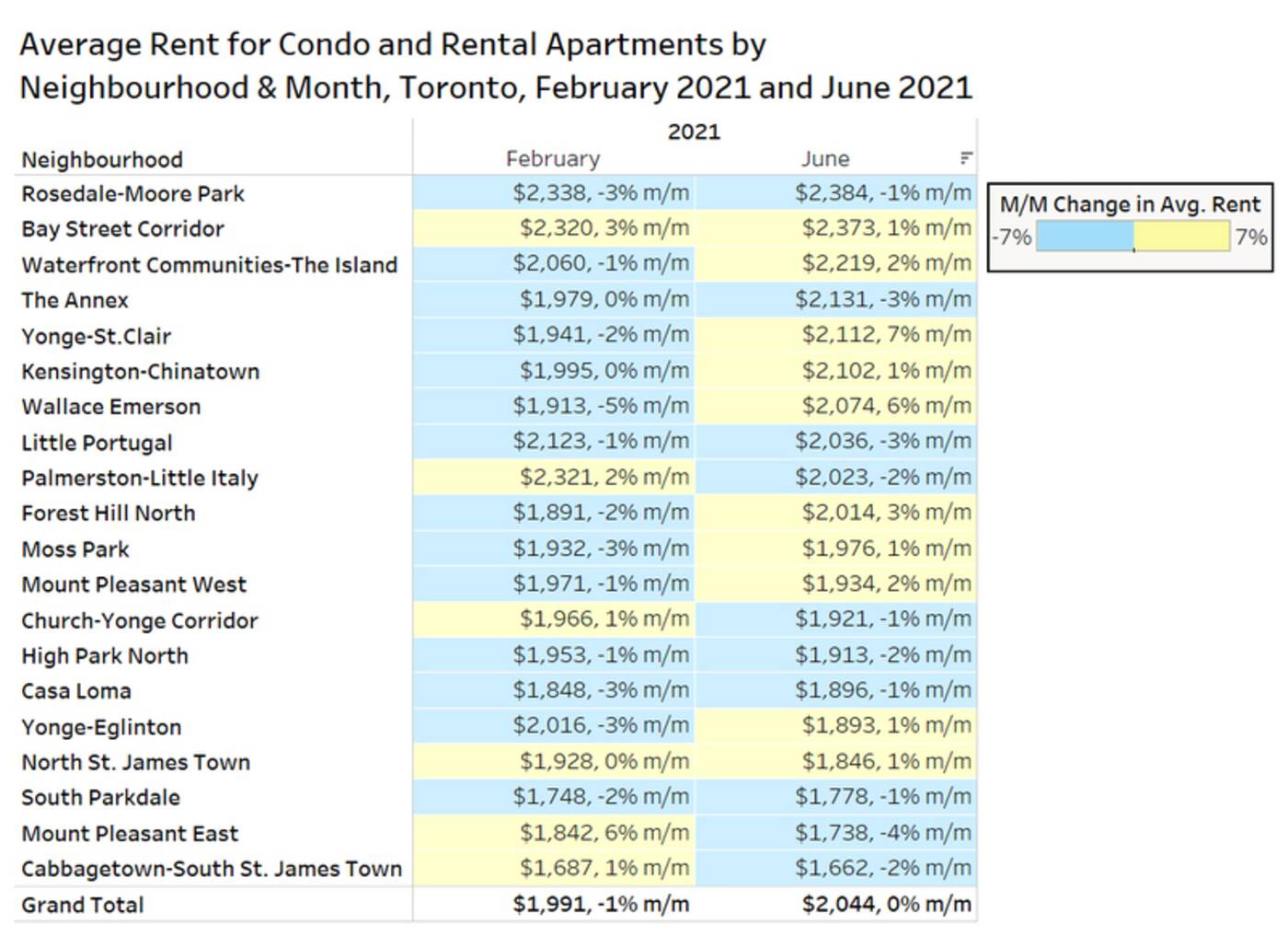 Some of Toronto's most expensive rental neighbourhoods saw rents increase in June compared to four moths earlier, while those with lower prices continued to mark declines. Image via rentals.ca and Bullpen Research & Consulting.

"Many of our clients are indicating strong demand in York Region and downtown Toronto, as tenants prepare for a return to the office and are snapping up suites in proximity to the largest employment centres in the GTA," said rentals.ca CEO Matt Danison when releasing his firm's latest Toronto-specific rent report on Monday.

Contrary to what was happening earlier in the pandemic, when prices started rising in the suburbs surrounding Toronto faster than in the 416 itself, the downtown core is now once again gaining more and more of the rental market share.

Further rent growth is expected this fall fall as things continue to open up and remote workers flock back to the 6ix. Bullpen is forecasting doubly-digit rent growth across the GTA in 2022, but here's where we stand as we exit the second quarter of 2021: 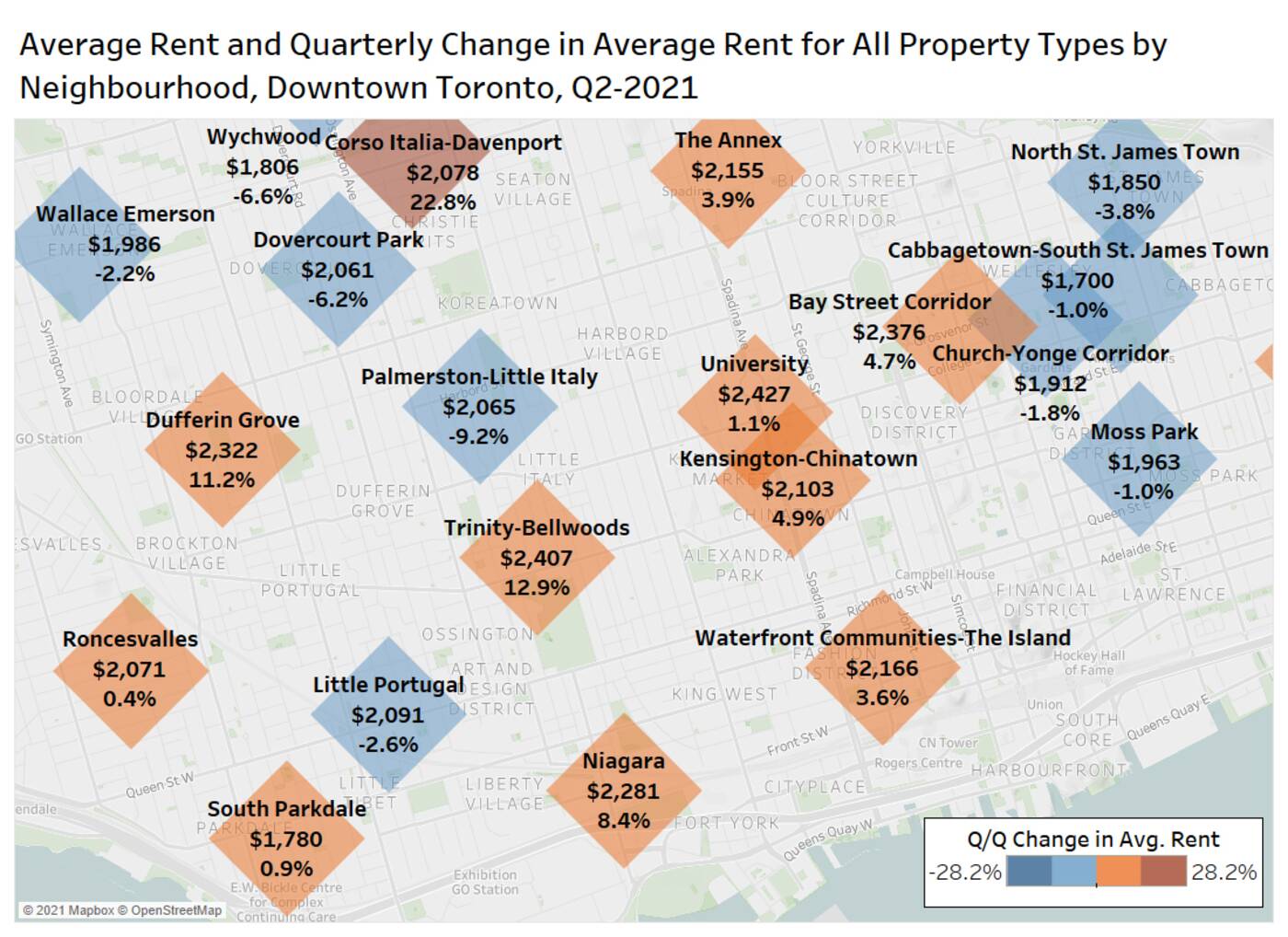 This chart shows the average change in rent prices by neighbourhood in Toronto between Q1 and Q2 of 2021. Image via rentals.ca and Bullpen Research & Consulting.

Cabbagetown-South St. James town saw the lowest prices available on rental units in Toronto during Q2 at an average of $1,700 per month, a drop of about one per cent from the quarter previous.

South Parkdale remains one of Toronto's most affordable neighbourhoods as well with an average rental price in Q2 of $1,780 (an increase of 0.9 per cent).

North St. James Town, in which rent prices dipped 3.8 per cent over the past three months (not including July) boasted an average price of $1,850 across all types of units.

The size and type of unit someone rents will obviously impact how much a landlord charges; it's possible that more one-bedroom and apartment units were rented out in these neighbourhoods during the time period surveyed than, say, three-bedroom condos or detached houses.

"Interestingly, the Church-Yonge Street Corridor experienced a decline in average rent quarterly, falling 1.8% to $1,912 per month," reads the report. "One of the contributing factors in the decline in the-Church-Yonge Corridor is the shrinking average unit size quarter over quarter, falling from 642 square feet in Q1-2021 to 633 in Q2-2021."