Here's a sentence I never thought I'd be typing within my lifetime: It's cheaper right now to rent a one-bedroom apartment in Toronto than it is in Barrie, Ontario.

No word of a lie, according to analysts who recently crunched hundreds of thousands of listings to examine median rent prices across Canada's 24 largest cities.

"For the first time ever, Toronto fell out of the top 2 markets to rank as the 4th most expensive city [in the country]," reads the July edition of Zumper's monthly Canadian Rent Report (previously hosted by Padmapper.)

"Toronto one-bedroom rent experienced the largest monthly decline in the country, dropping 5 per cent to $1,710... Meanwhile, Burnaby and Barrie outpaced Toronto by moving up to become 2nd and 3rd, respectively."

Vancouver, which prior to the pandemic had trailed behind Toronto in second place for nearly two years, came in once again at spot number one in July with a median one-bedroom rent price of $2,000.

Our west-coast rival now boasts the same average rent price that it did at the beginning of 2018. Toronto rent prices, on the other hand, are the lowest they've been since February 2017. 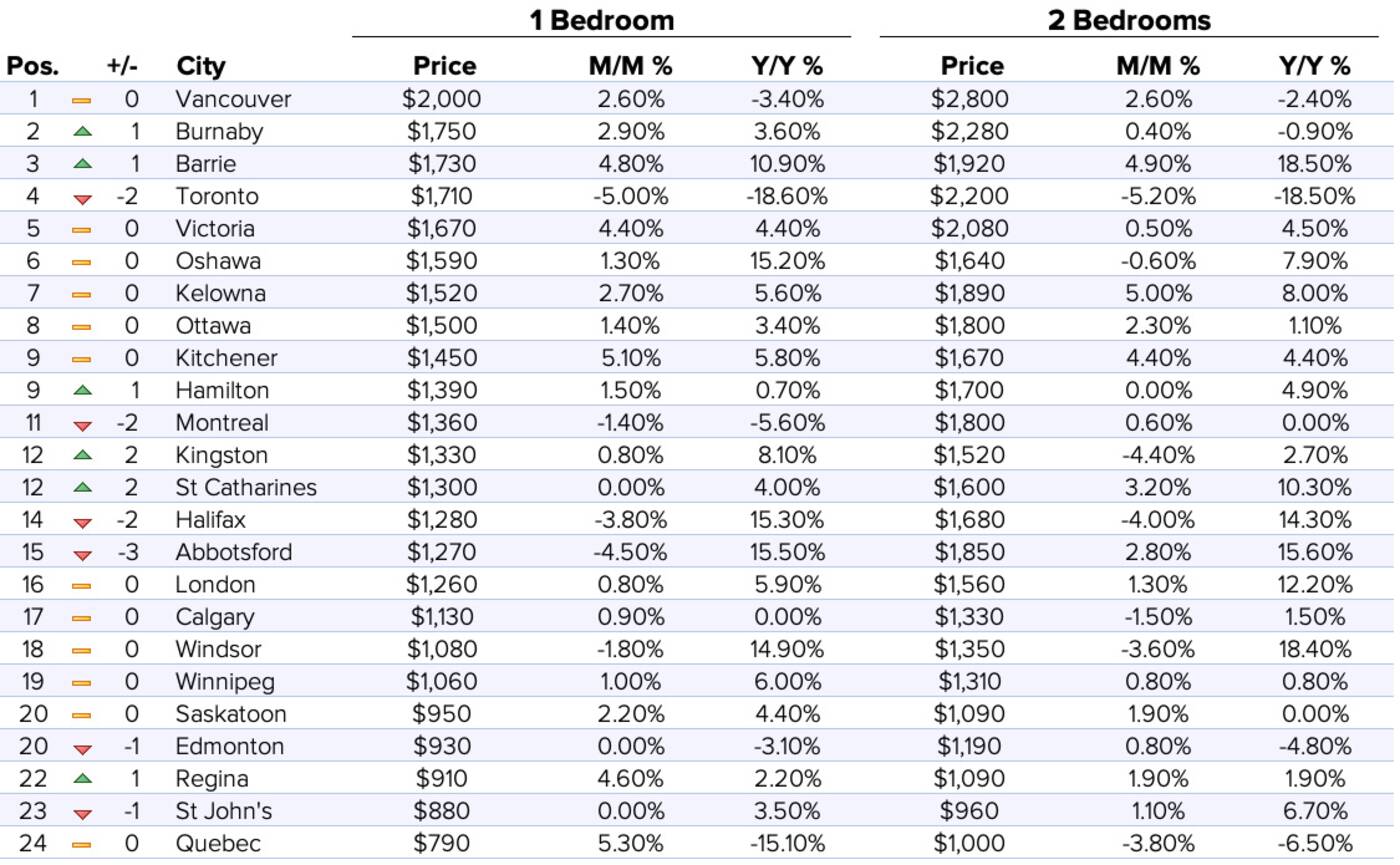 Only 5 markets across Canada's largest 24 cities saw rent prices trend downward in July. Toronto was one of them. Image via Zumper.

Contrary to what some analysts have said based on slight month-over-month price upticks in specific GTA neighbourhoods, Toronto's rental market doesn't seem anywhere close to recovering from the impacts of COVID-19.

By Zumper's calculations, rents actually fell again between June and July of 2021, by five per cent for one-bedroom units and 5.2 per cent for two-bedroom units (which are now coming in at an average of $2,200 — the third most expensive in Canada following Vancouver and Burnaby.)

Average rent prices in the City of Toronto are still down, year over year, by about 18.6 per cent for one-bedrooms.

While slightly less steep than the 20 per cent we were down at the end of 2020, Toronto renters are still seeing average asking prices far lower than what they were faced with before the pandemic hit: In March of 2020, Padmapper was reporting a median one-bedroom rental price of $2,230.

Prices fell steadily, steeply downhill in Toronto for a full year straight after that, though they've since grown closer to stable in some parts of the city. For now.

Barrie, meanwhile, is exploding up the ranks — in part thanks to an exodus of people from Toronto who left their downtown condos amid the pandemic for larger, cheaper apartments elsewhere.

"Barrie has turned into one of the most sought-after real estate markets in the province, appealing to families who want to plant new roots, and real estate investors who want to profit on the investment buzz emanating from Central Ontario," reported RE/MAX earlier this year.

"Many industry observers had foreshadowed for years that Barrie was going to experience skyrocketing activity. Still, it was not until the COVID-19 pandemic and a change in real estate consumer behaviours that led to the city's incredible success."

Good news for people who own rental properties in Barrie, I guess — not so much for renters who left Toronto thinking they'd be paying less per month to live an hour north.