10 new skyscrapers about to transform the Toronto skyline

Toronto is a city of soon-to-be skyscrapers. According to the 2020 North American Crane Index, we have the highest number of active tower cranes out of every other city in the continent, with 120 in the downtown core alone. And in a matter of years, those cranes will be replaced by some of the tallest condos in the country.

Here are some new skyscrapers about to transform the Toronto skyline.

Hariri Pontarini's monster condo (pictured above) is slated for completion in 2024. It's one of three towers making up the Pinnacle project at One Yonge, and will be the tallest building in Toronto, after the CN Tower. If you've got a budget as lofty as this development, you'll be able to afford one of their $800,000 units. 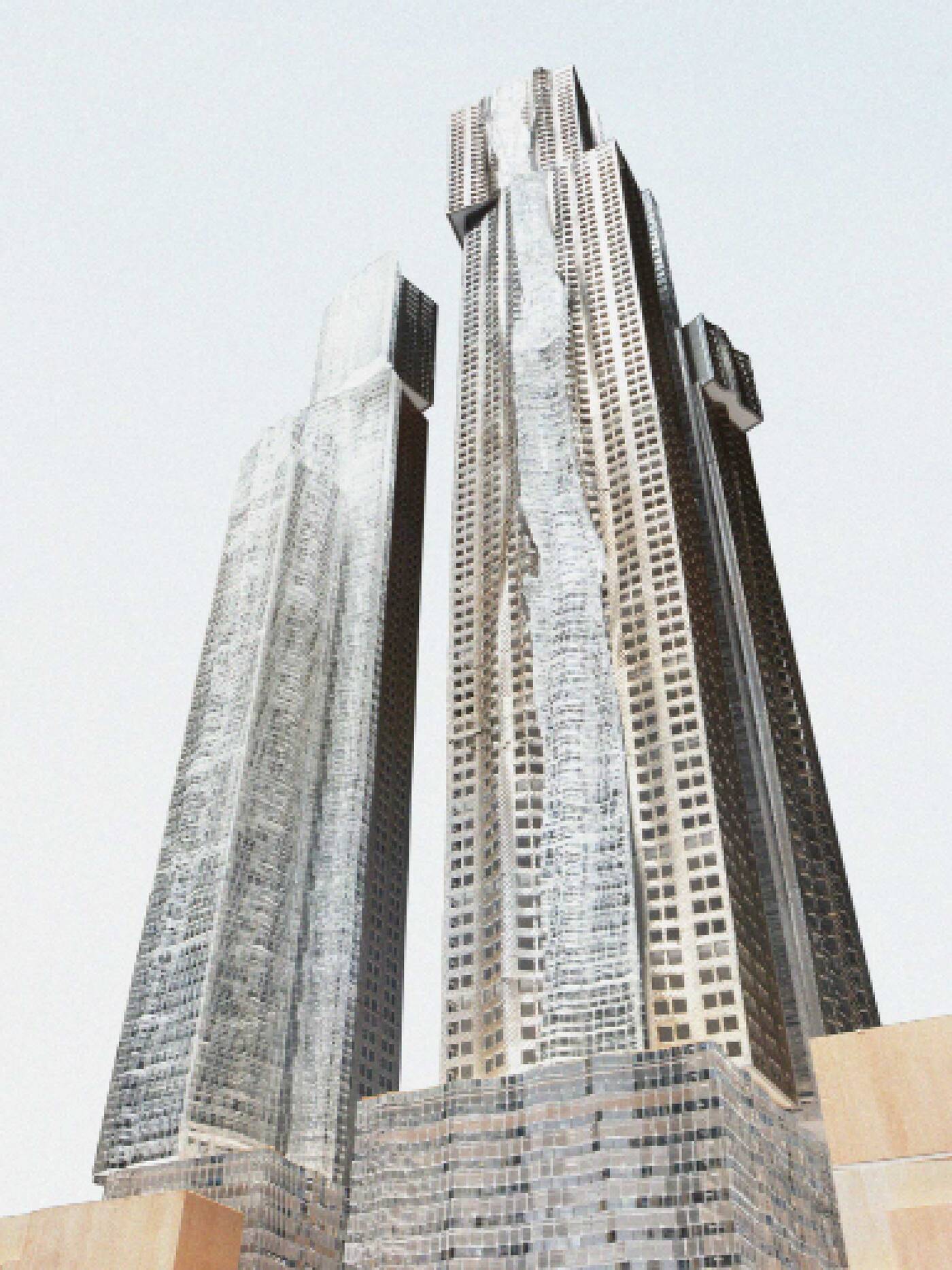 The pair of Mirvish+Gehry condos are being slated for Duncan Street. Photo via City of Toronto submission.

The Princess of Wales Theatre will soon get two garganguan companions, courtesy of two new mixed-use, high-ceilinged towers in the Entertainment District. Billowy "canopies" will protrude out of these tower podiums and over Duncan Street. 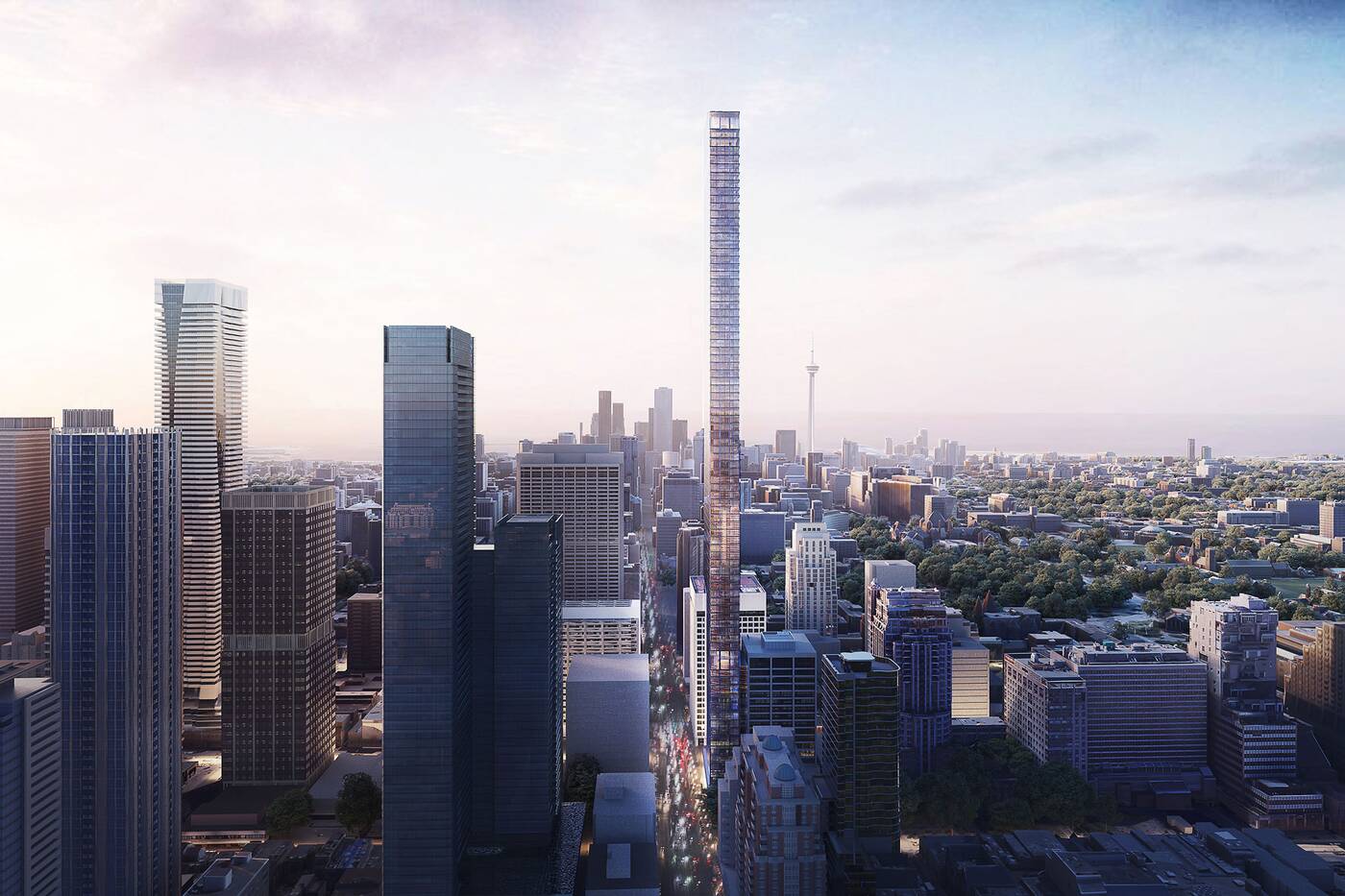 A new tower at the northwest corner of Bay and Bloor will span 87 storeys high. Photo via Herzog & de Meuron.

Swiss-based architectural firm Herzog & de Meuron and Canadian group Quadrangle have been appointed by developers Kroonenberg Groep and ProWinko to transform the corner of Bay and Bloor into this mix-used tower with floor-to-ceiling operable windows and a sky lounge. 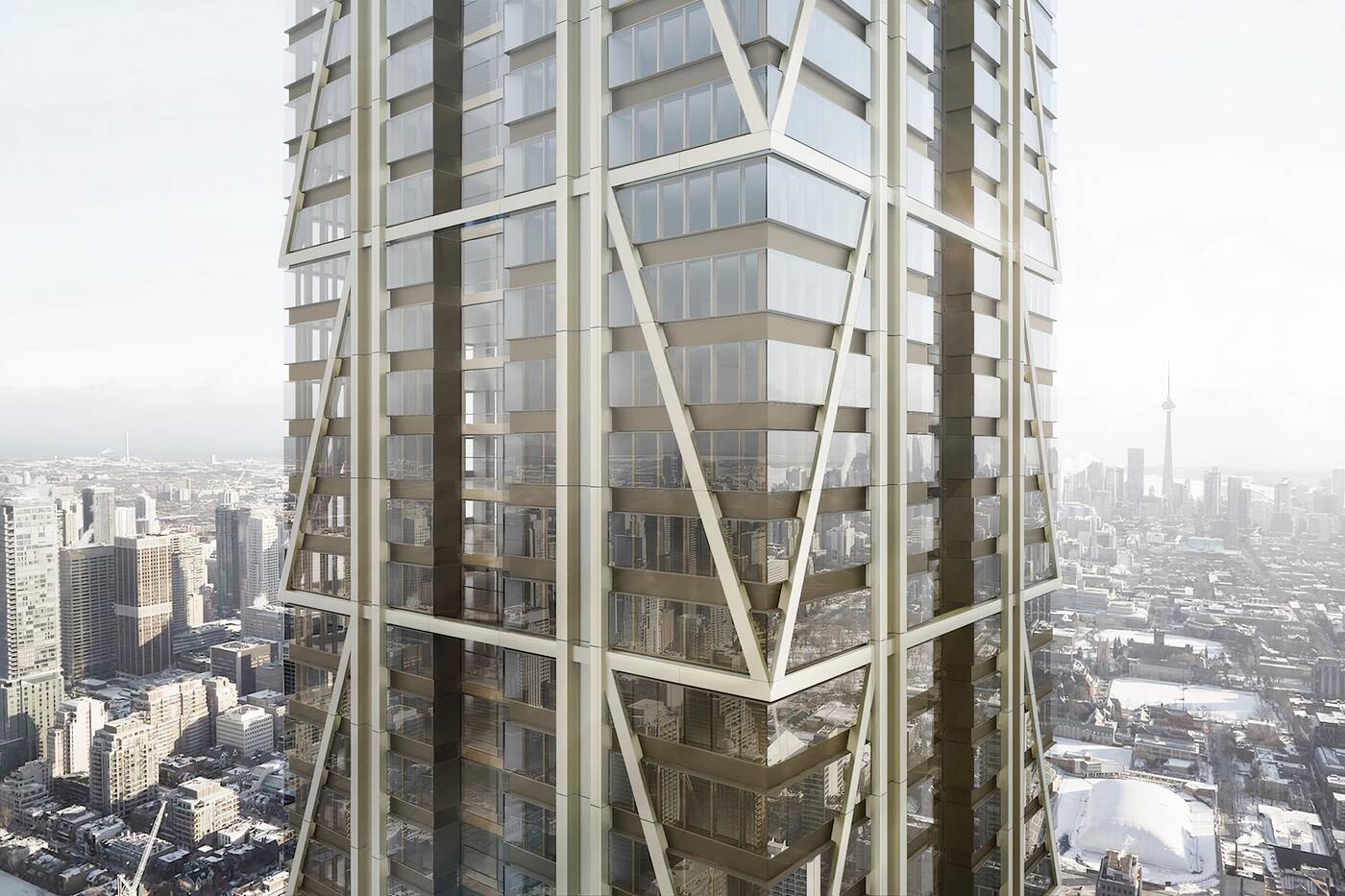 The One at One Bloor West will span 75 storeys when it's completed in 2022. Photo via Mizrahi Developments.

If you've passed by Bloor and Yonge lately, you've undoubtedly caught sight of the scifi-looking construction site of Mizrahi Developments' The One. Construction was delayed for several months but above-ground work has finally resumed. It will be Canada's first supertall skyscraper when it's done in 2022. 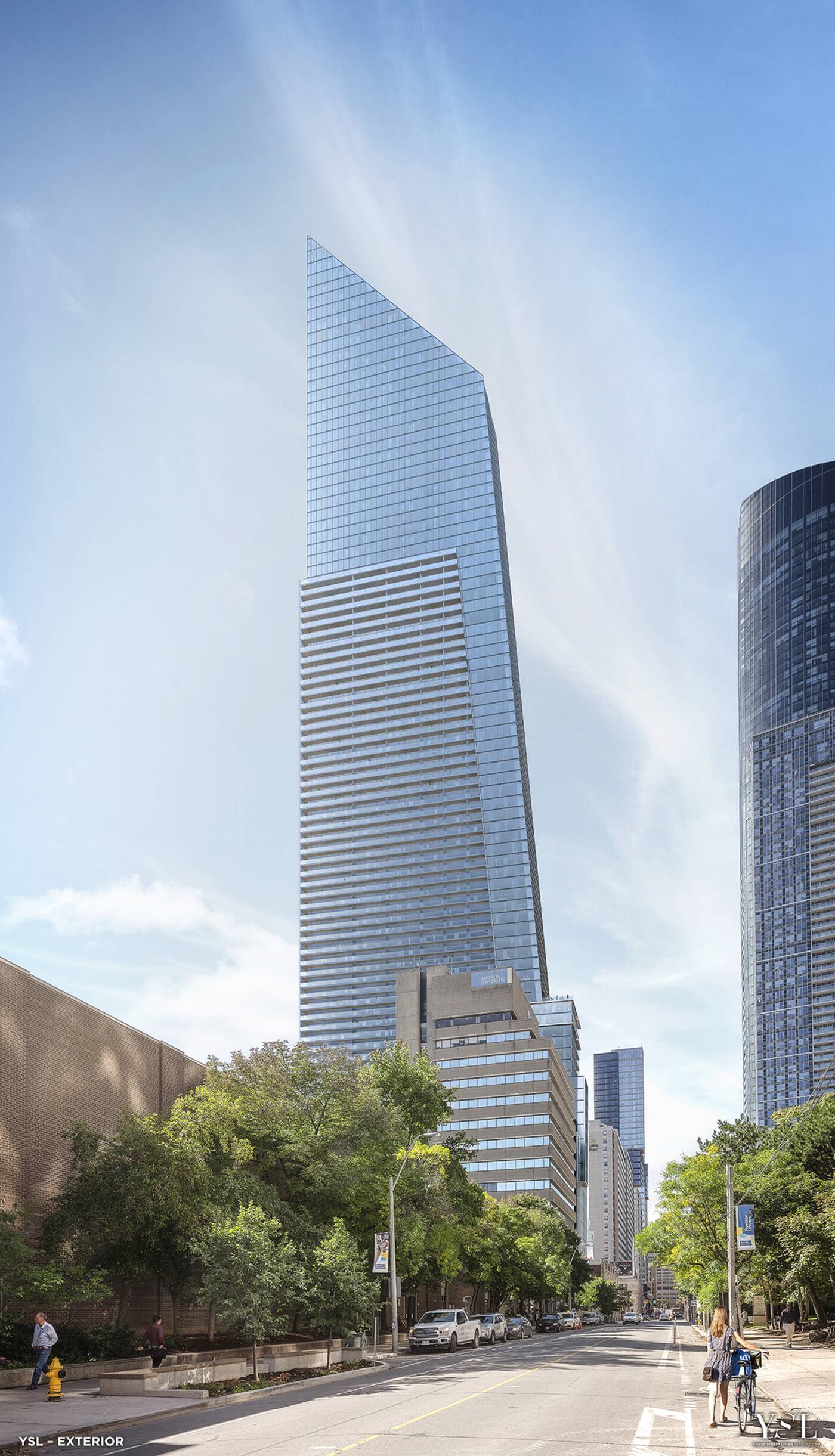 YSL Residences is currently under construction at 383 Yonge Street. Photo by architectsAlliance via City of Toronto submission.

The southeast corner of Yonge and Gerrard has seen massive changes over the years, in large part to make way for two towers, dubbed Yonge Street Living (YSL). Both skyscrapers will be connected by a sky-bridge. 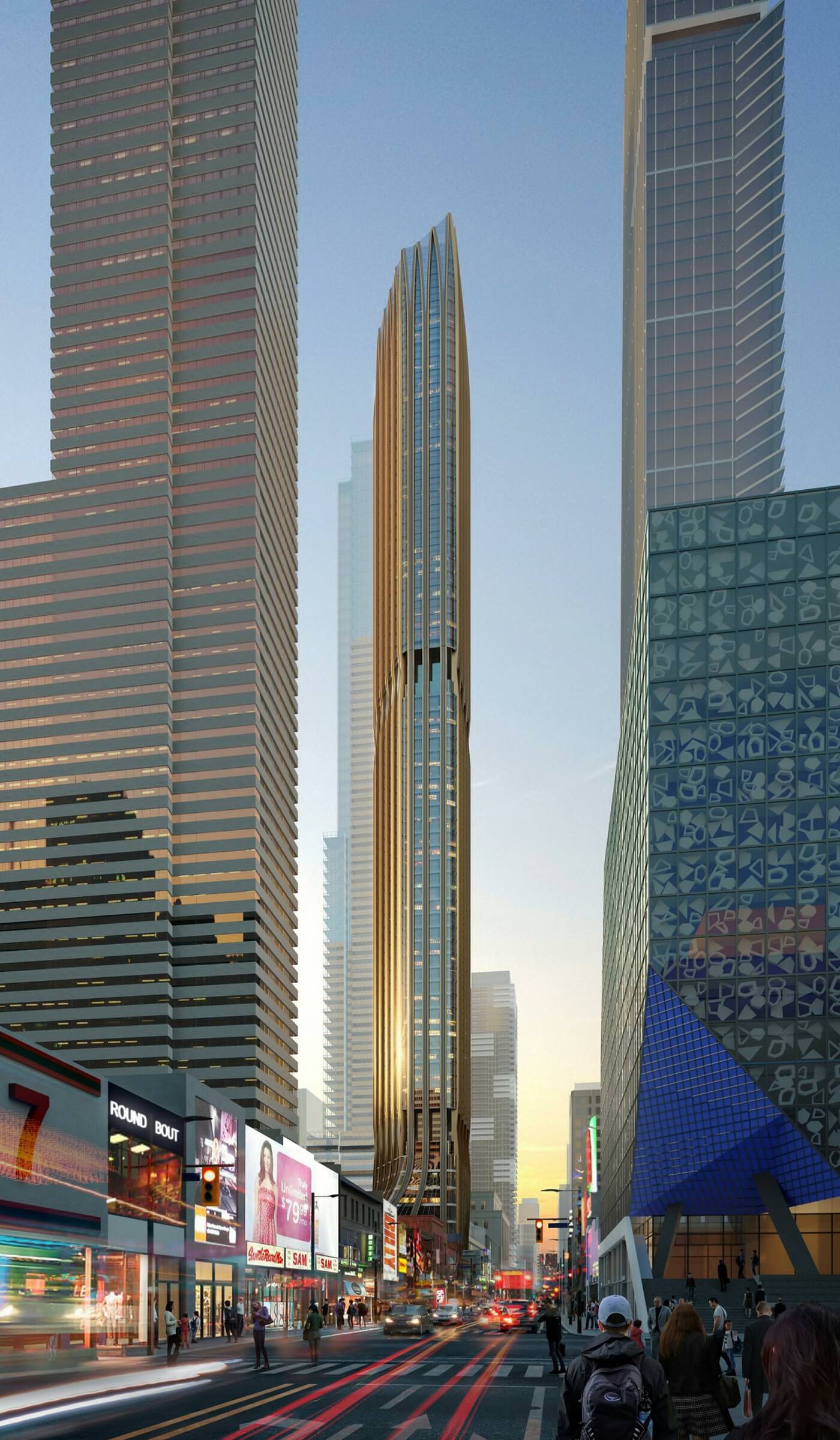 372 Yonge Street will also be home to a new music venue called Club Bluenote. Photo by Dialog via City of Toronto submission.

The Aura Tower is still the tallest residential building in Canada right now at 79 storeys, but only slightly shorter will be this new project from Dialog, which will sit directly across the street. It will also hold a new venue called Club Bluenote, named after the iconic rhythm and blues club which used to exist on the property in the 1960s. 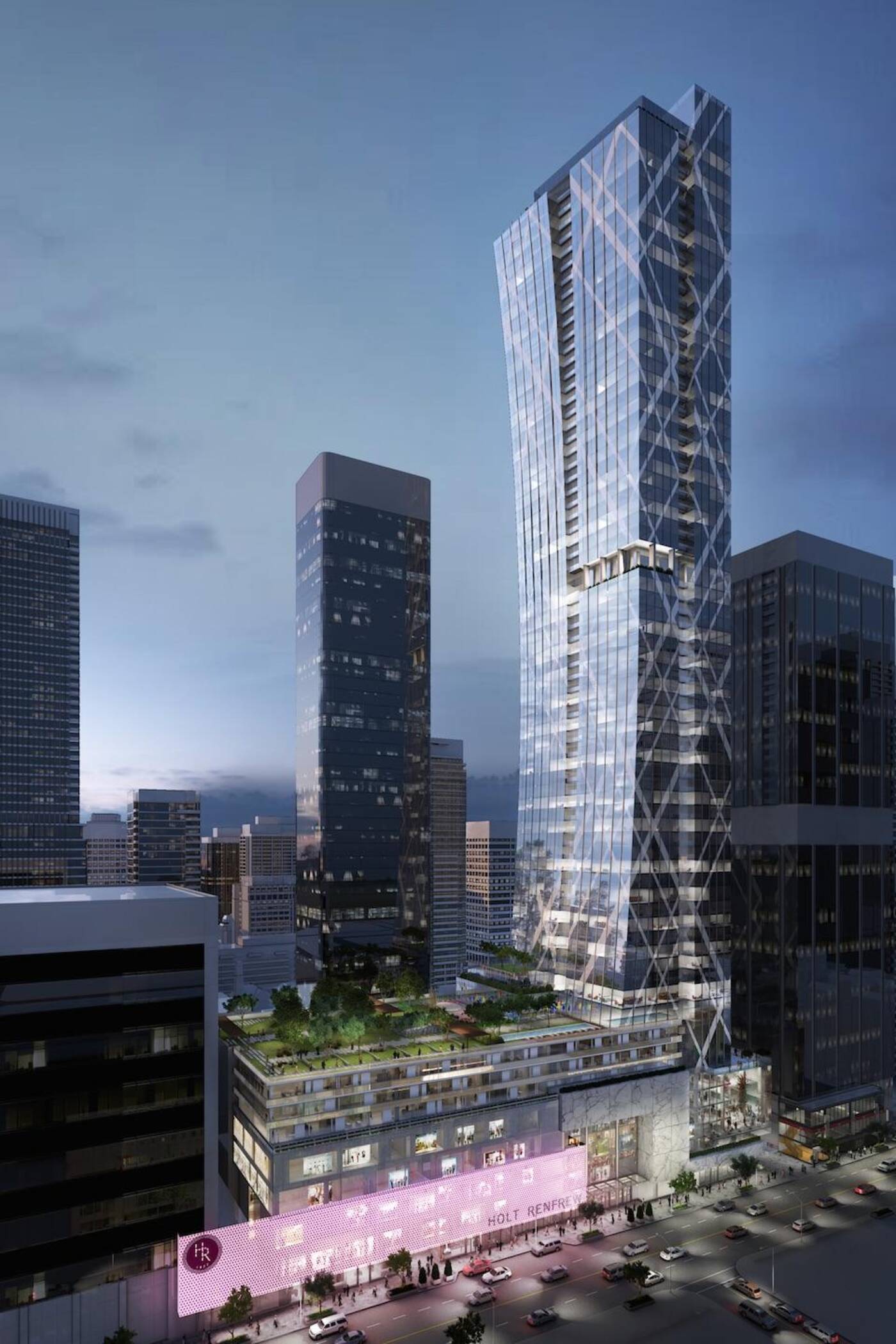 A 70-storey condo has been proposed to sit atop the Holt Renfrew in Yorkville. Photo by Pellow + Associates Architects via City of Toronto submission.

Rising up from Yorkville's Holt Renfrew will be this condo with office space and retail on the bottoms floors. There will be 600 residential units included in the build. A trio of KingSett towers ranging from 50 to 69 storeys located around the corner are also on the way. 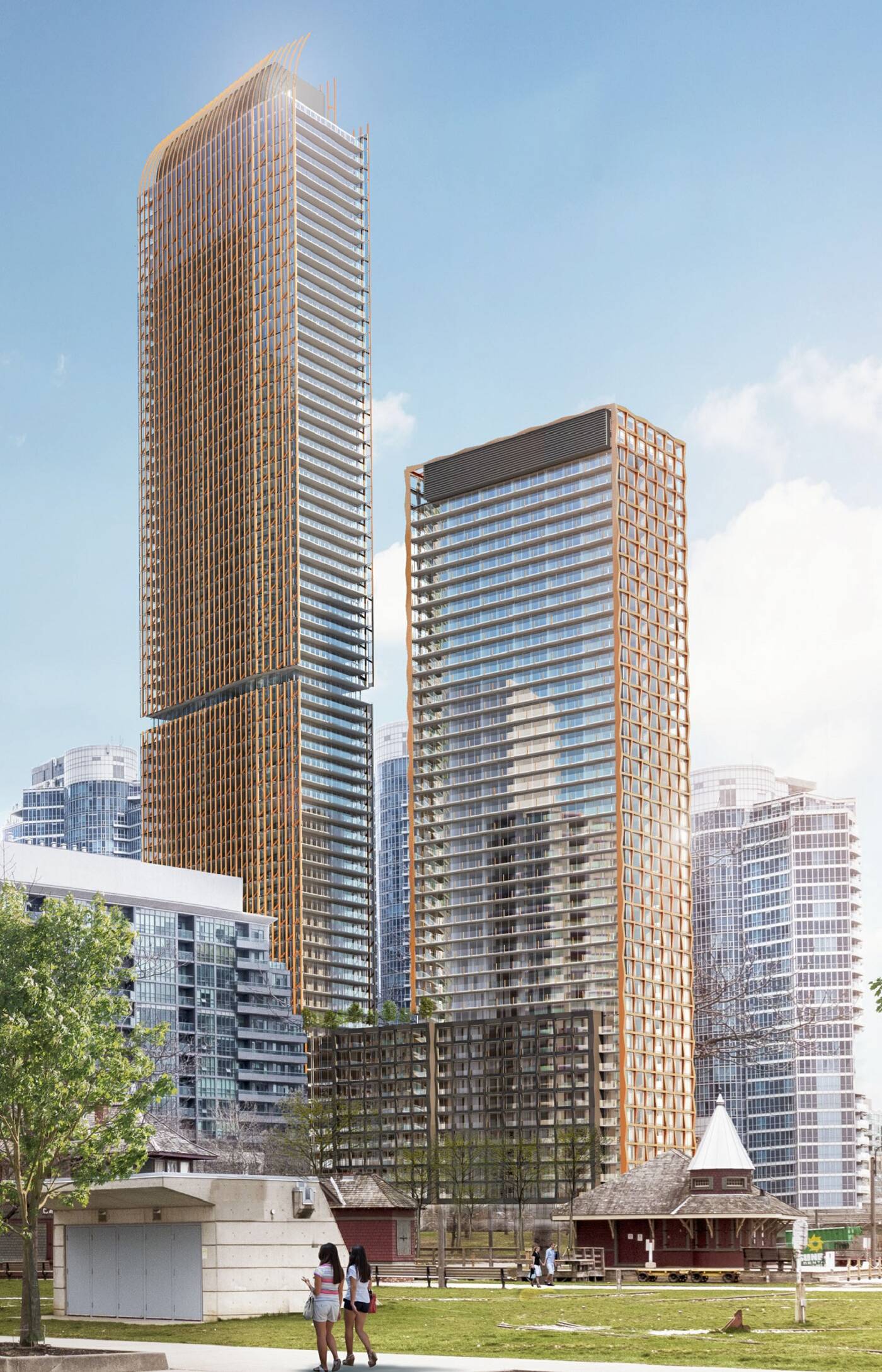 A pair of towers from Lifetime Developments is current in pre-construction status. Photo via Wallman Architects via City of Toronto submission.

The waterfront will soon be even less visible from uptown thanks to this pair of towers from Lifetime Developments. Originally slated to be affordable housing, this parking lot will instead be a mix of condos with some affordable housing sprinkled in. 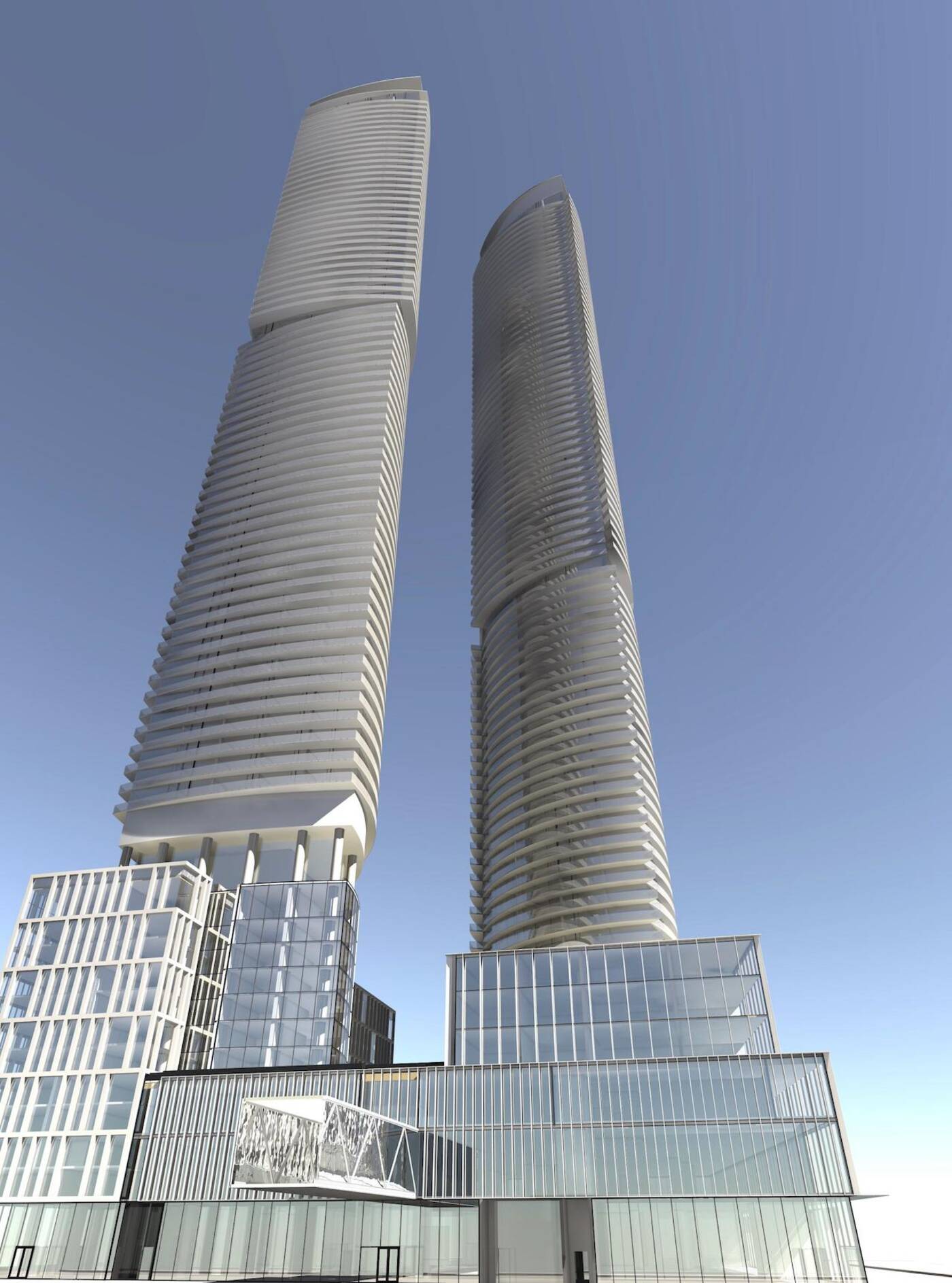 Two residential towers will soon sit on the northeast quadrant of Toronto's LCBO lands. Photo by architectsAlliance via City of Toronto submission.

These phase 1 towers from architectsAlliance will soon sit on the northeast quadrant of Toronto's waterfront LCBO lands. The area will also include a new LCBO headquarters office tower just south of Sugar Wharf with connections through The PATH. 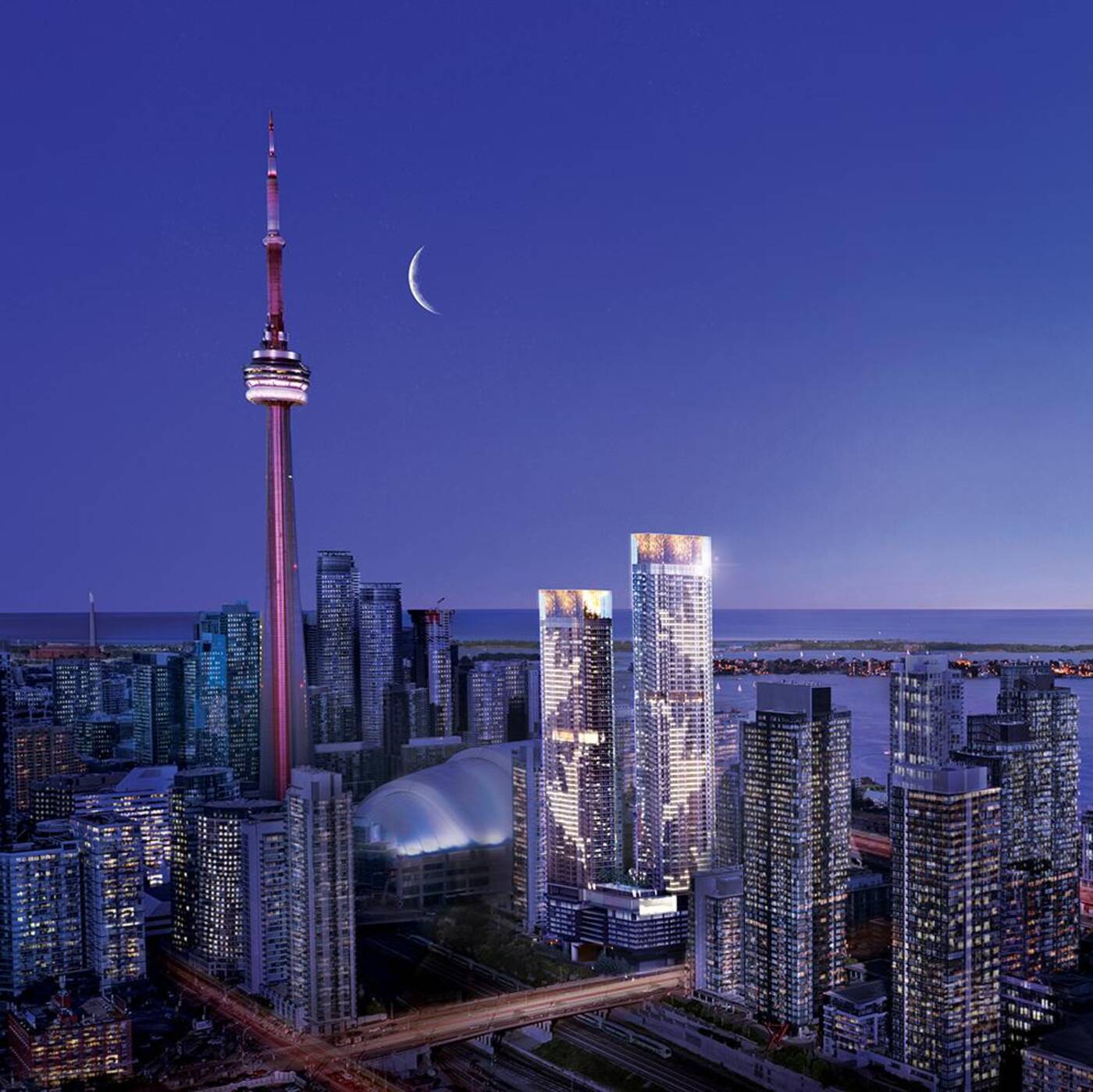 Concord Adex's headquarters will soon be replaced by this mixed-used condo project. Both towers will jut out of a 10-storey podium and contain more than 1,300 new condo units.