The southwest corner of Yonge and Bloor looks like something straight out of Blade Runner 2049 these days.

Construction on Mizrahi Developments' The One — which is vying to be Canada's tallest building at 85 storeys — is now three years underway. 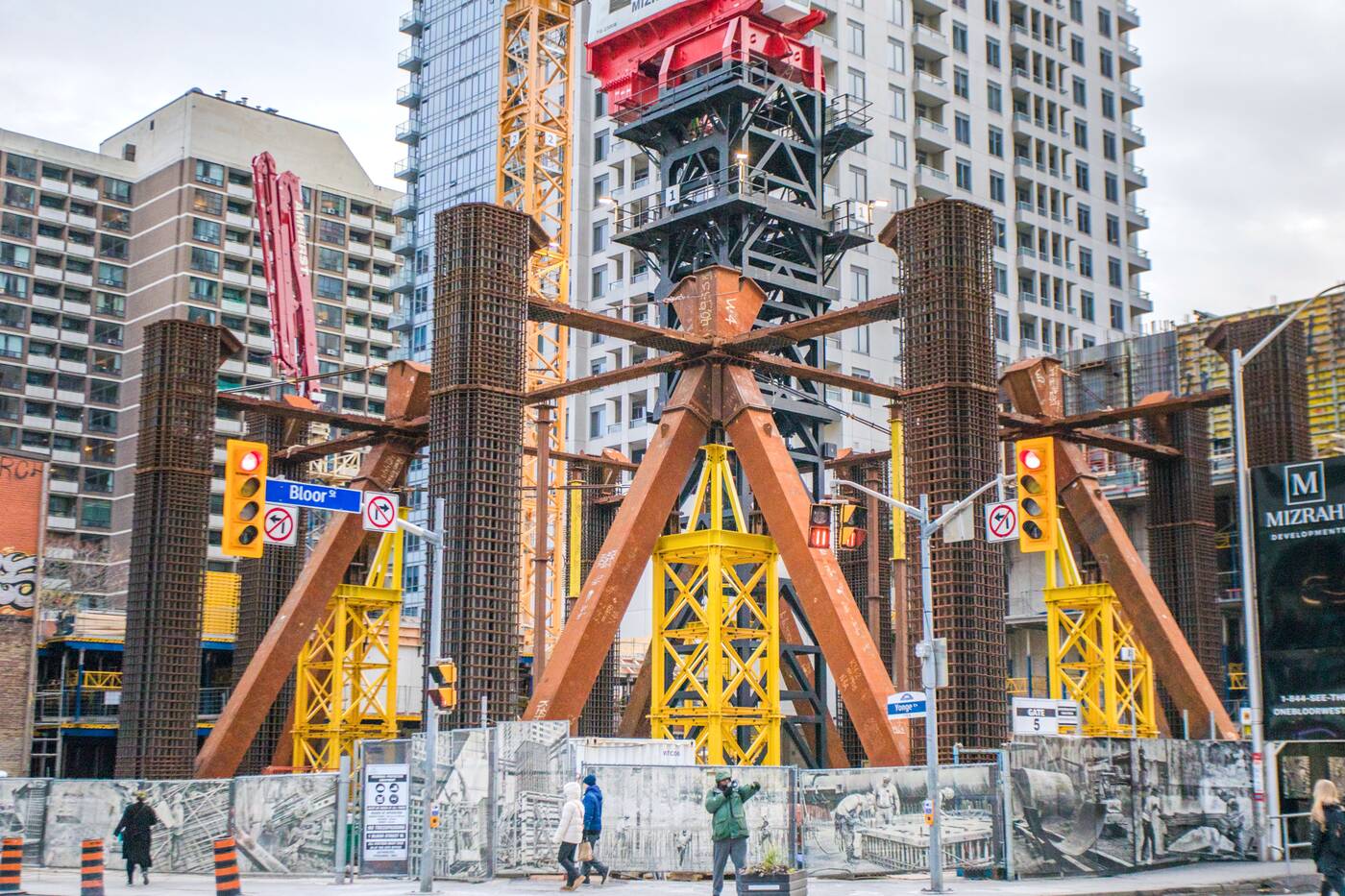 Above-ground construction is well underway at Mizrahi Developments' The One tower.

After months of delay, work has resumed on this ambitious industrial endeavour.

Replacing the now-demolished 114-year-old menswear store Stollerys are eight super-columns, which pedestrians can see rising up from the bowels of the site.

Weighing 40 tonnes each and made from steel, the super-columns reach up from mega-caissons installed in the bedrock. 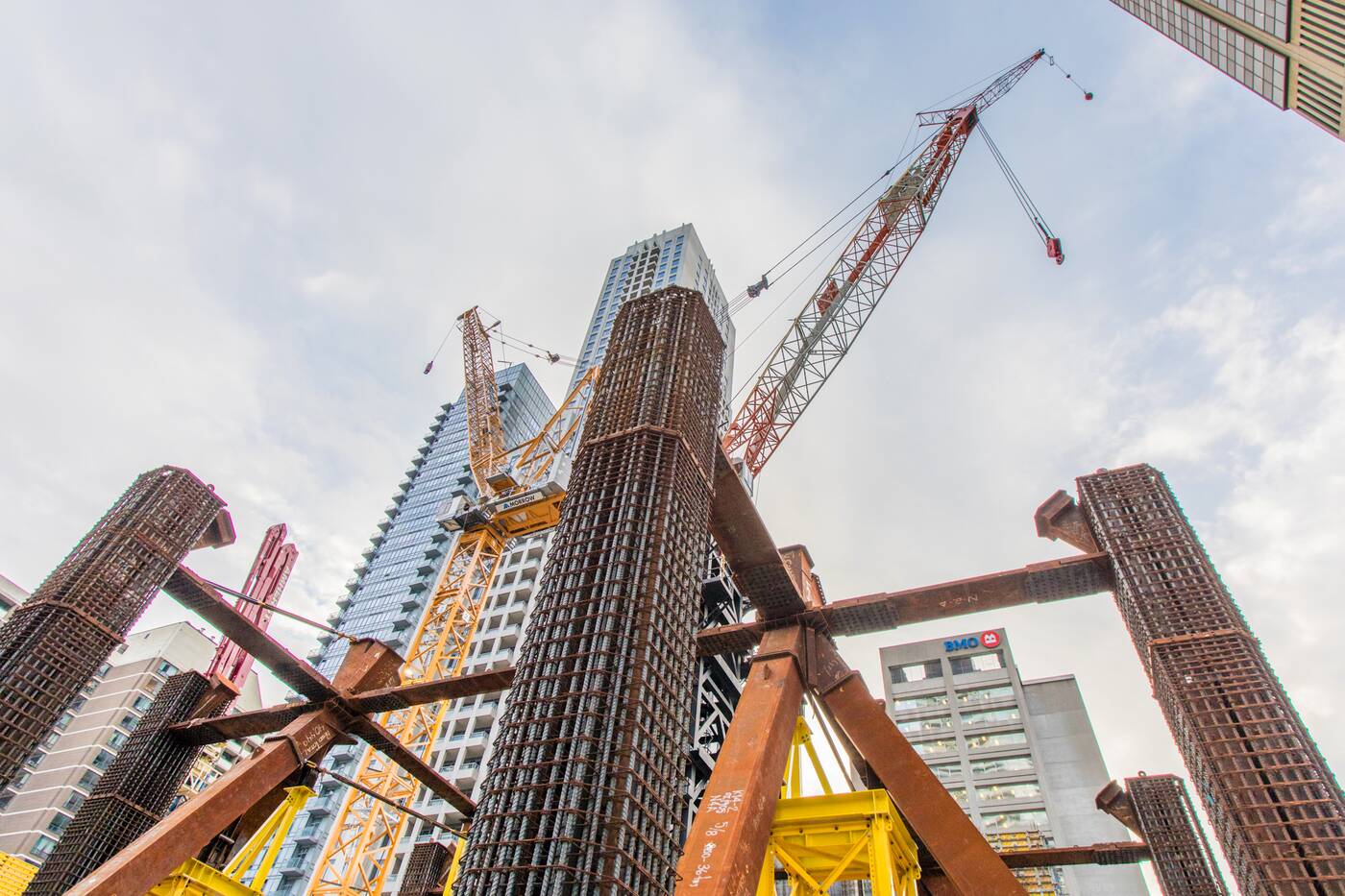 Eight super-columns weighing 40 tonnes each currently rise up from the construction site.

Currently sitting as tall as the future ground-floor retail space, they mark the future footprint of the incoming luxury tower.

Inside are canted columns with steel caps, which are resting on yellow steel supports, forming an inner ring.

At the centre of it all is the Link-Belt TG2300B: a special crane that might be one of the highest capacity cranes ever deployed in the city. 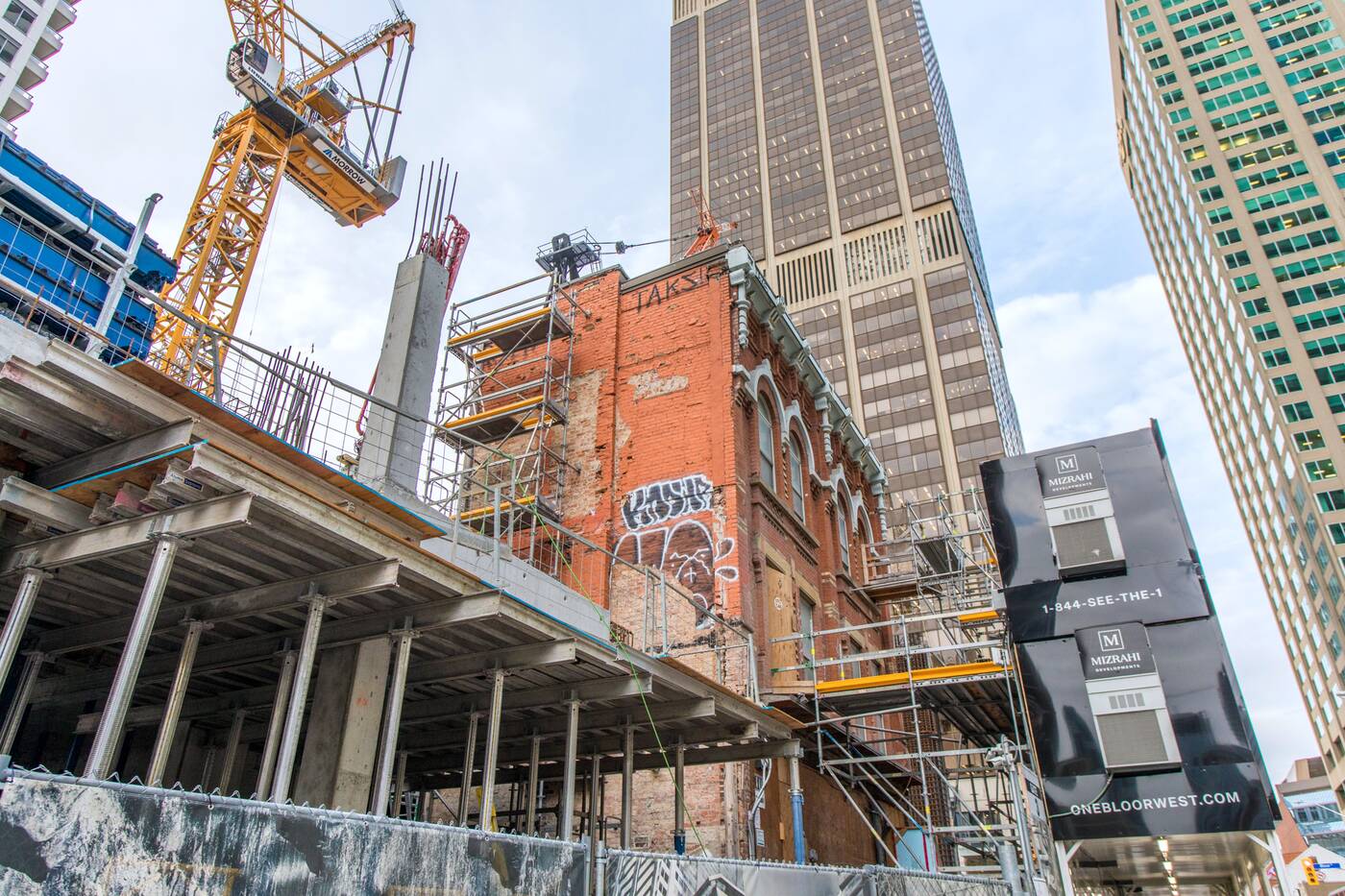 The development includes the preservation of a three-storey brick heritage building.

The sheer mass of the project is overwhelming, especially when compared to the humble three-storey brick heritage building that still remains on site. It looks like the 2020 Toronto version of Robocop.

According to estimates, The One won't be complete until 2023. 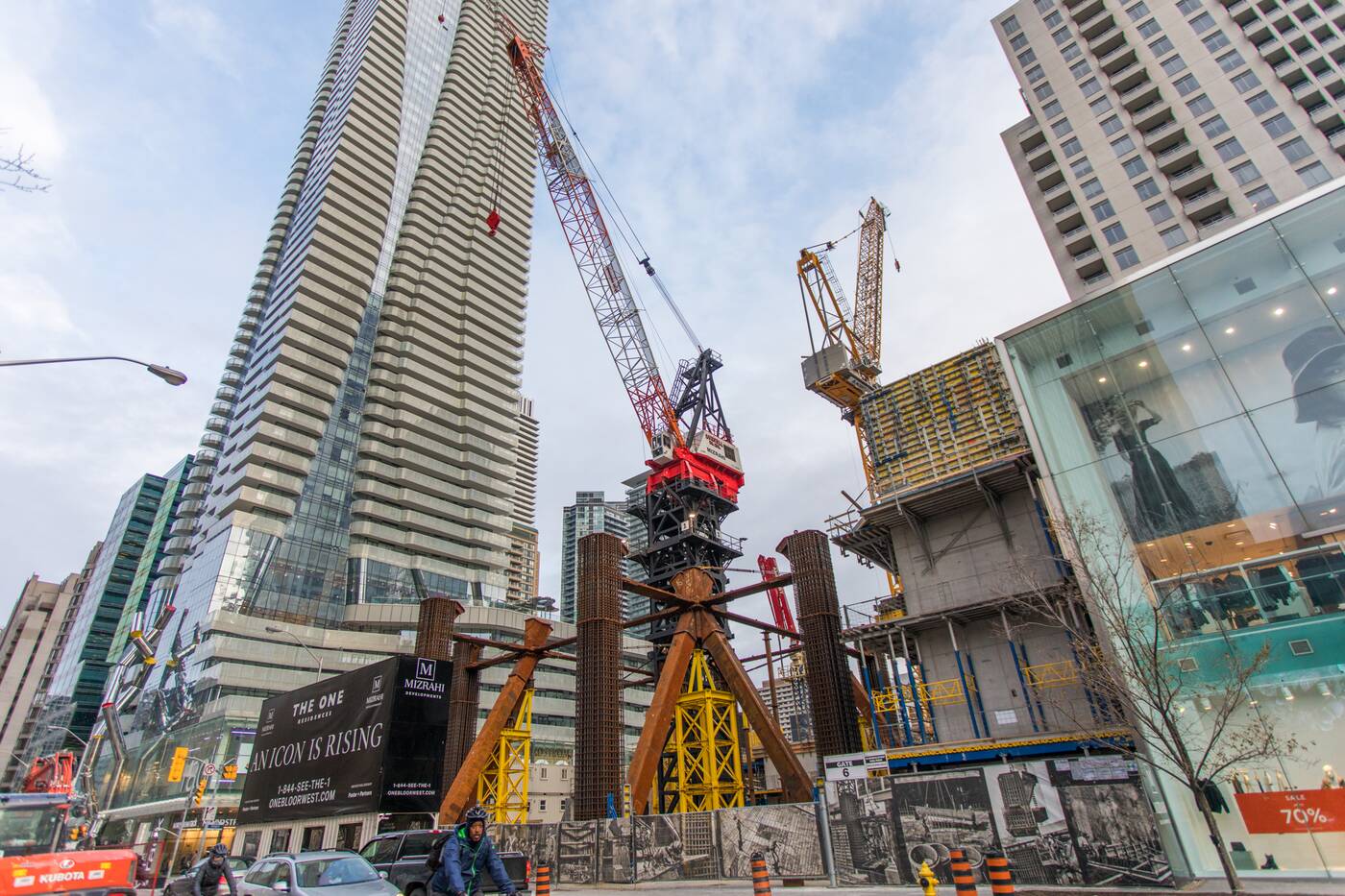 Construction resumed this August following delays due to permit issues in 2019.

When it's done, the supertower will be home to 18 floors of retail space (including an Apple Store), a new Hyatt-owned Andaz Hotel, and 416 condo units above.

The One marks the country's first supertall skyscraper and will soon surpass its 76-storey neighbour One Bloor. It will be the country's tallest building — that is, until the gargantuan SkyTower is built. 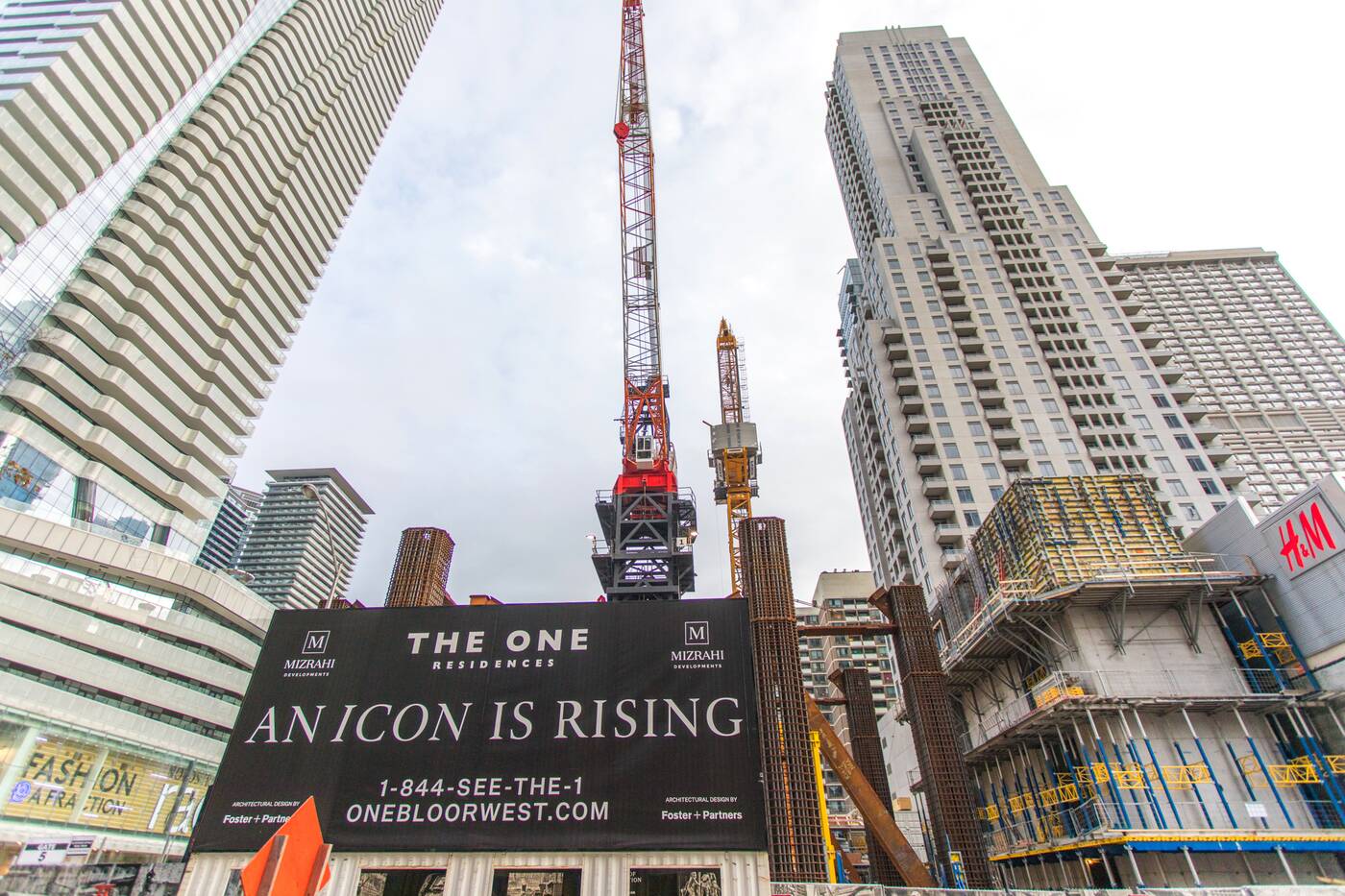