Toronto's tourism industry is booming, drawing more and more people from across the globe to our food, film and special event scenes every year.

Wise to the fact that tourists need places to stay when they're visiting The 6ix, hoteliers have been responding in kind.

Two new trendy boutique hotels will soon enter the mix, if all goes well for their proprietors, adding some 375 guest rooms — and a welcome splash of colour — to the streets of downtown Toronto. 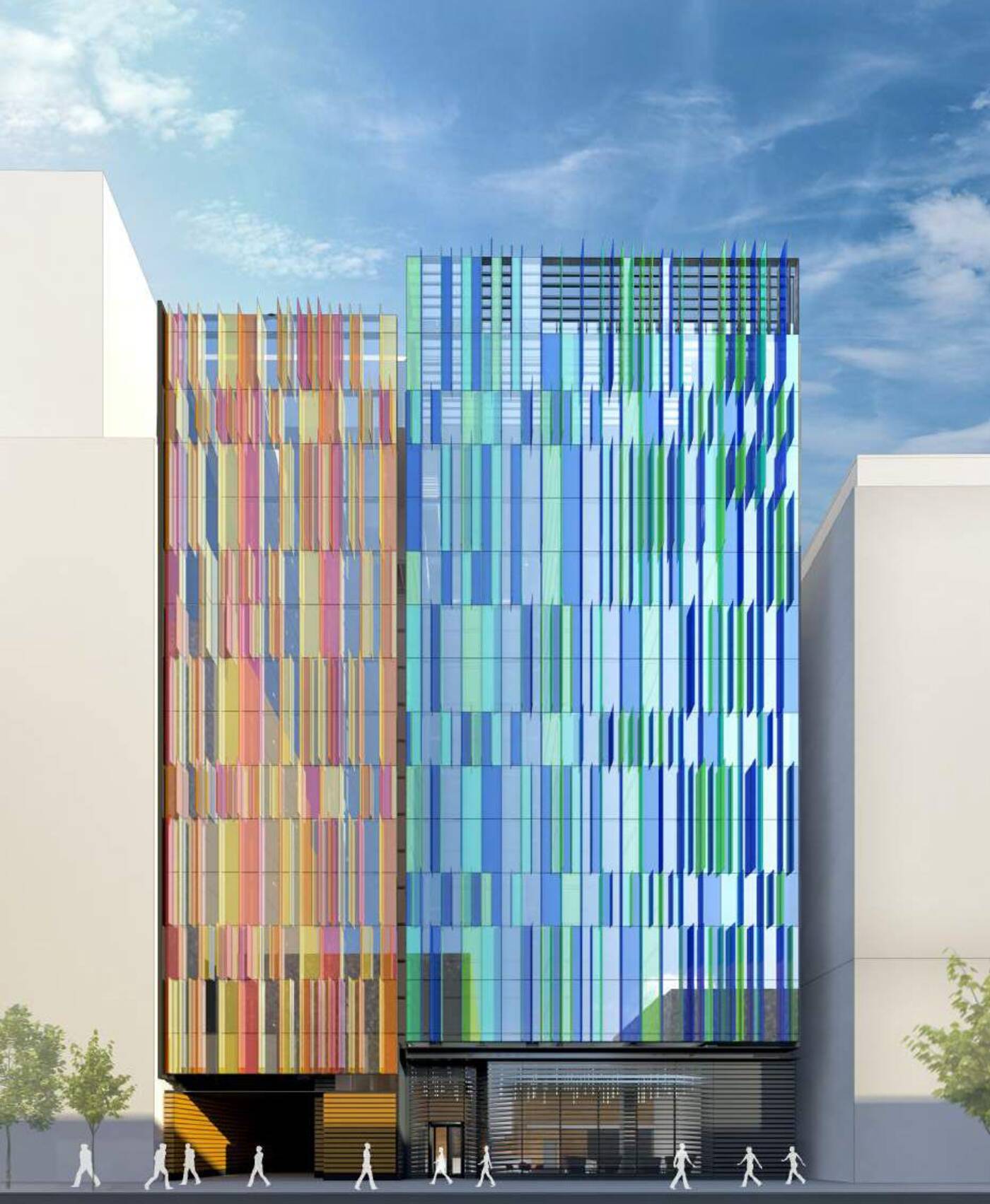 The colourful glass and porcelain exterior of the hotel frontage on Richmond Street would be a colourful addition to Toronto's Fashion District. Image via Manga Hotels/City of Toronto.

Mississauga's own Manga Hotels has filed a development application with the City of Toronto to build two connected, mid-rise hotel towers "of contemporary architectural design" between Richmond and Camden Streets, just west of Spadina Avenue.

Designed by Sweeny & Co Architects Inc., the proposed towers would rise 15 and 17 storeys high and boast a combined 14,177 square metres of floor space.

Each building is expected to have its own restaurant, bar, cafe, washrooms, reception area and entrance, but would share a common two-storey podium. 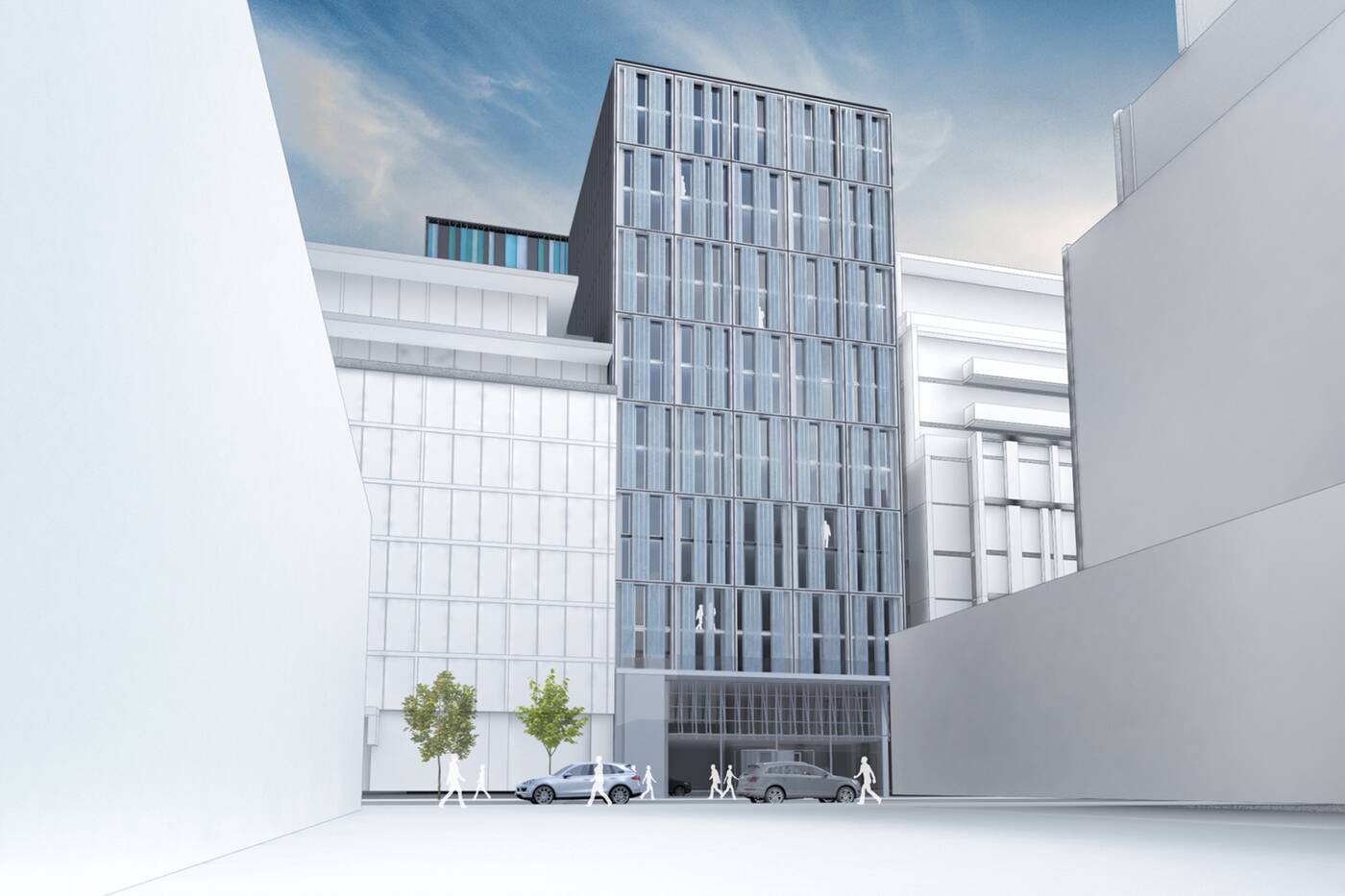 The smaller hotel fronting Camden Street would be connected to the Richmond Street hotel from behind. Image via Manga Hotels/City of Toronto.

The larger building — the one with its frontage on Richmond Street — would also have meeting rooms, office space, a "galleria" and a rooftop bar.

That vibrant-looking hotel, with a warm vs. cool-coloured exterior motif, would replace what is currently a two-storey commercial building and a surface parking lot spanning 465-471 Richmond Street West.

"The building will be well designed and will use high quality materials, in terms of materiality," reads the development proposal.

"The building's skin will primarily consist of porcelain panels in addition to glass fins supporting glass and spandrel panels. There will be some masonry, but this will be restricted to the first floor of the rear facade." 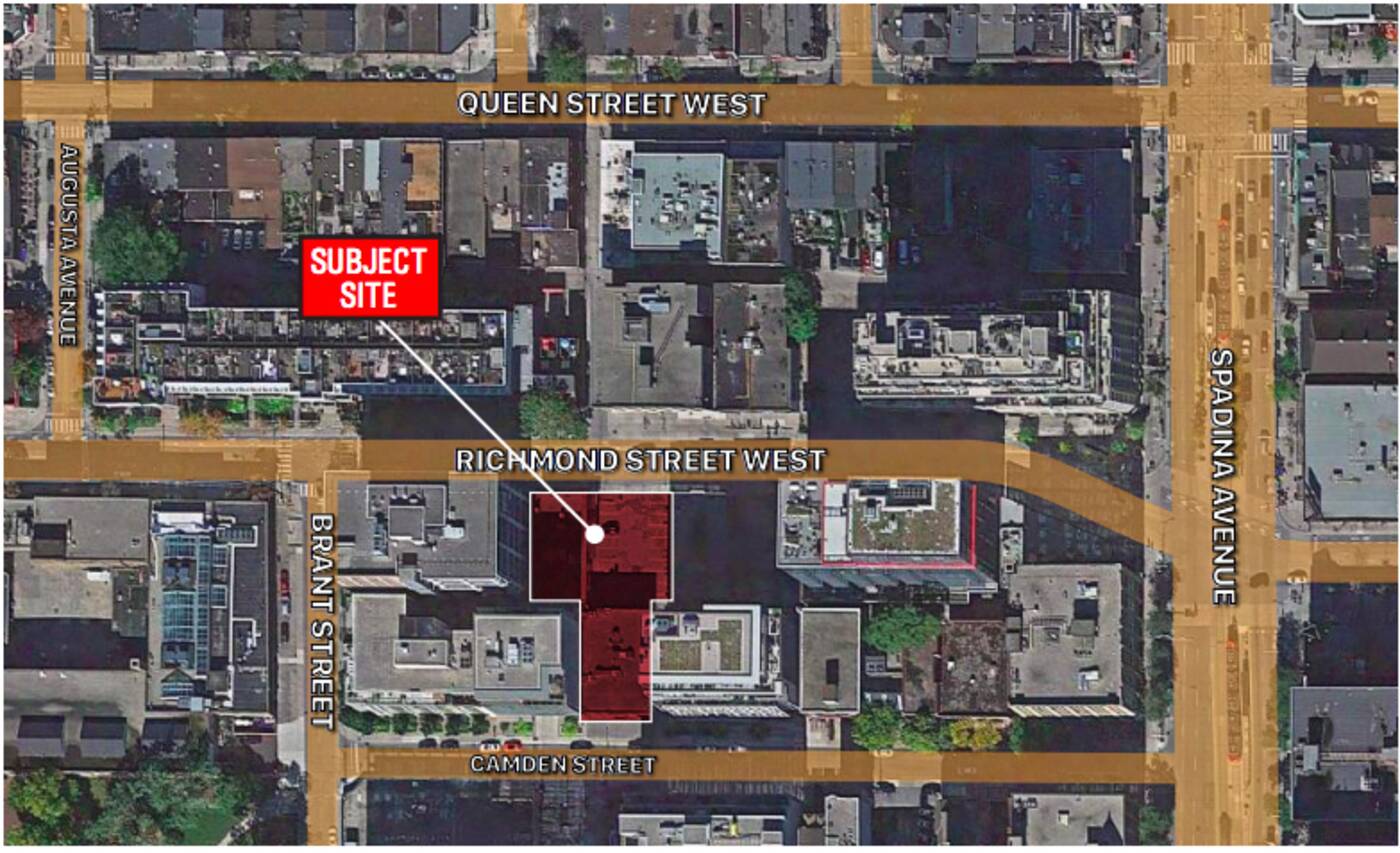 The yet-to-be-branded pair of Manga hotels in Toronto's Fashion District would fall between Brant Street and Spadina Avenue. Image via Manga Hotels/City of Toronto.

The building accessible from 38 Camden Street would replace one three-story office building and is proposed to include "transparent window treatments" at street level to "enhance visibility into and out of the building."

Underground parking for both buildings would be accessible via two "car elevators" that connect to an underground garage beneath the Richmond Street tower.

It is not yet known how Manga plans to brand the hotels, but it's worth noting that the company already operates 18 others in Ontario, Nova Scotia, Newfoundland, New Brunswick and New York — all of them affiliated with larger chains such as the Marriott, Hilton and Hyatt.