Off Foundry not just a techno party thanks to Jeff Mills

Over the 25 years, Jeff Mills has done just about everything possible to defy easy categorization: spreading sorcery throughout Detroit airwaves as The Wizard, serving as a foundational member of Underground Resistance, building monumental techno label Axis Records from the ground up, scoring movies, doing residencies from New York to Tokyo, collaborations with French filmmaker Claire Denis, Kubrick-inspired sculpture installations, and finding time to clock over a hundred DJ sets a year.

Now, as he descends from the cosmos to grace us with a three hour set at the inaugral edition of Mansion's Off Foundry series this Saturday, I spoke to Jeff about techno, his new film collaboration with French filmmaker Jacqueline Caux, and about what happens inside a club space. 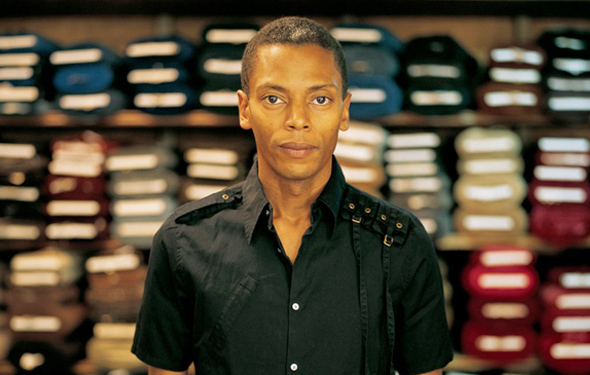 With the amount of projects you're balancing, I'm guessing touring doesn't really disrupt your workflow?

Not at all, it's actually factored in. I'm constantly working on projects and albums, I actually have the opportunity to be able to put them into action - I can see what an audience responds to, and I bring those ideas back into the studio... it's actually a large part of the process.

For your upcoming film, Man From Tomorrow, when director Jacqueline Caux talks about it, she mentions a series of conceptual conversations that kicked things off. How does one begin such a conversation?

It started with me explaining from my impression, what I do for a career and then moving onto how I think I do it differently from anyone else - what my approach is, and what my beliefs are regarding the best way to mover forward. In time, we realized that we were narrowing down common links between both our lives, and it was from those common points that we began to agree and disagree about what the film should be.

For instance, I believe neither of us are really into a certain type of technology - I still don't use a computer to sequence music, I would prefer to plug one machine into the next... and she also does that in the way she shoots film. So we both understood that it's not about technology, but skill, and that skill comes from experience, and experience comes from doing things and getting older and that comes from travelling, and you just create these chains and links of how we can kind of see the screen together, from two different perspectives, and then work towards the same thing. cinema-wise and sound-wise.

Tracing back to common reference points and branching out from there?

Working in film before, your relationship has usually been scoring a finished work, like Fritz Lang's "Metropolis", but when did the music integrate itself into the film in "Man From Tomorrow"?

Actually, the music was made long before the film, because the music was the result of what I was thinking many years before, a large collection of things I made mainly for myself based on time and space and space travel, reality, memory, all just sitting around and not really being used. So when we discussed how to score it, I gave her maybe a hundred tracks, and she collected the ones that she thought were most appropriate.

Despite the fact that your identity is mostly obscured in Man From Tomorrow, whenever you're touring, I hear a lot of the discourse around you referencing you as an "originator" or "forefather." For someone who's so interested in what tomorrow holds, how do you process this kind of praise?

I mean, I don't. I don't visit the past so often. It's something that I did, y'know, all those years in Detroit, and Underground Resistance - but not something that I use directly in what I'm doing now. My objective when I'm recording music or coming up with ideas is to totally start from zero. And after years, well, decades, I'm getting better at cleaning the slate.

What's done is done, I can't change it, I can't make it better - it's like a step on a ladder - it was necessary to do those things to get me to this point. But then these things I'm doing now are also necessary to get me to where I want to go in thirty, forty, fifty years. So I'm very active in doing many different types of projects - contemporary dance, classical, contemporary art, because I know that I'm going to need the knowledge later.

I need to experience them to know how they're all linked together, to know which is most important in the whole creative process. So I'm more interested in forward than back.

When you talk about moving forward, I think how in a lot of circles of young folks nowadays, there's been a renewed interest in science fiction and futurism as a response to all the inequalities in the world now - authors like Octavia Butler who touch on race and gender as issues that we have to think about when we think about the future. When you're thinking about the push towards the future, are there politics tied to those ideas?

I'm definitely looking at the news constantly, actually, more than constantly. I'm looking at things trying to imagine where they lead to, and how we may be living in the future, in a world that's the result of what we're watching on TV today.

Which is kinda terrifying...

Yeah, and it's just everything - from weather to nature to conflicts to religion. That's part of the process in between making the music and playing the music - watching the news, reading the newspaper, reading books, looking at films, everything. I wouldn't say that there's a political aspect to what I'm doing but for sure it's the result of what I'm seeing, what's happening today, and an idea of where I think we may be headed - the consequences of where we're at. 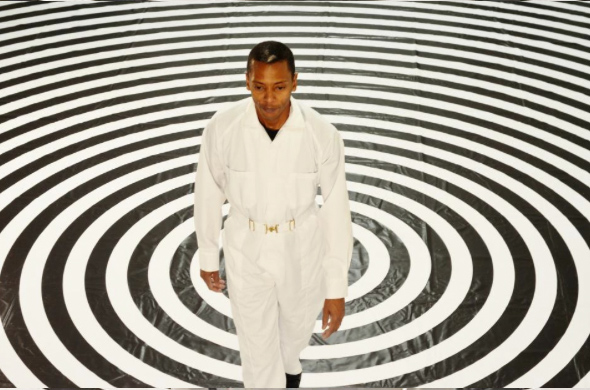 I have a sense that this music I'm trying to make today may be even more useful in those circumstances - understanding other places other than earth could be the result of nature becoming so extreme that maybe, one day in this century, we decide that the surface of this planet is too difficult to be on. So we have to stay near Earth, but we can't stay on the surface because it's just too volatile.

So being in space may be the next step for us. So it's not so much about now, actually. I don't spend much time thinking about the past or now, actually - only using now in order to be able to make an equation for later, for tomorrow.

One last thing - there's a photo set of you at this recent set you've played where you're wearing a sweater with sort of large circular arm holes at the shoulder, and it creates this visual illusion that you're armless - it looks like it came from another time or place.

I dunno, maybe it's just the way that the image was captured. But I mean, these spaces aren't just the music... it's the atmosphere and everything in between. For me, it's not just a techno party. I know that's what we think we've been doing for the last twenty five years or so, but for me it's not just a social event. It's not just a party.

My view of it is really multidimensional, something really interesting is being created through the energy of all the people in the audience and the sound and this conversation that's happening between the audience, and how they're reacting - something very unique is happening, and I think that most of us don't even realize that it's happening.

There are many other factors to this whole atmosphere, this experience, that I think in time we're going to understand more... how to make these happenings more believable, and more interesting and more meaningful - and this may have to do with what's happening in the world as well. Of course, dance music is an escape, but an escape to what?

So I think that there are a lot of things at play - a lot of people in our industry believe that this isn't going to be the next rock'n'roll, but it's going to be the next... something. But we don't really know what. I kind of sense that it's something that we've never experienced before. I do hundreds of parties a year, everywhere, so I have a pretty good gauge of how people are thinking and seeing what this music really represents - and it's nothing I can really trace.

Jeff Mills plays Off Foundry on Saturday, January 24 at 99 Sudbury.