The history of the Guvernment Nightclub in Toronto

When it was officially announced that the Guvernment entertainment complex would be shutting its doors forever at the end of January 2015, it marked the end of Canada's largest and longest running nightclub.

Its 18 year run would be extraordinary for any bar, let alone one of this scale, but unlike most club closings, this one wasn't a result of the party crowd moving on to the next new hotspot.

"We didn't make this decision," INK Entertainment's Charles Khabouth told the Toronto Star, explaining that the building had been sold to developers.

There had been rumours for at least a decade that the iconic waterfront megaclub would be torn down to make way for condos, and finally it came true.

However, Khabouth pledged that he was working on building an even bigger venue downtown. It turned out to be Rebel Nightclub. 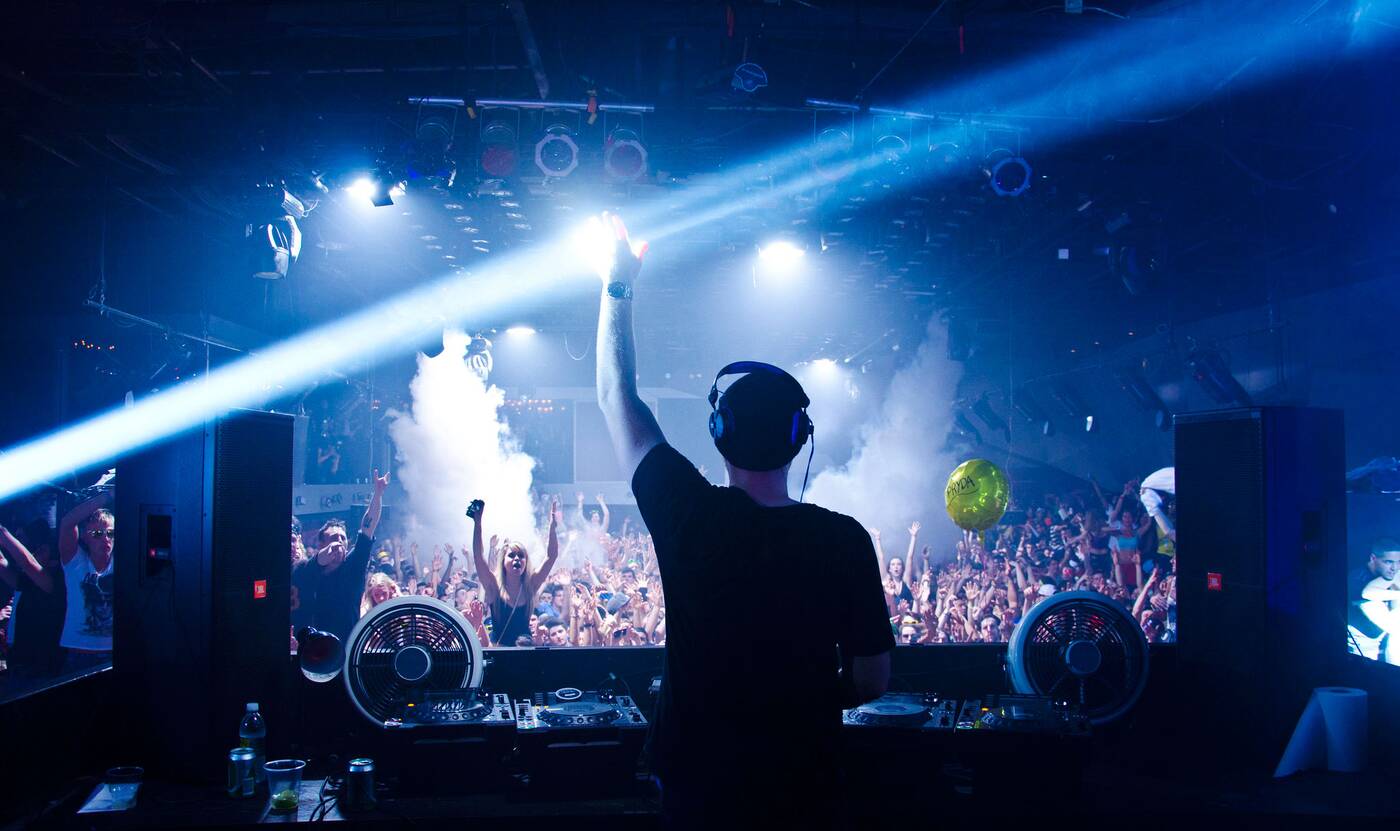 Eric Prydz at the Guvernment in 2013. Photo by Connie Chan.

Long before the Guvernment opened its doors in 1996, the building had already played a huge role in the history of Toronto club culture.

The warehouse complex was first converted into a nightclub in 1984 by Tony and Albert Assoon, two of the four Assoon brothers behind the legendary Twilight Zone afterhours club.

They named their new venture Fresh Restaurant and Nightclub, but it was not destined to be as influential as the Twilight Zone, and didn't even make it two years.

There's still controversy as to whether the Assoons were forced out or if they simply couldn't keep up with their loan payments, but the new owners reopened almost immediately after taking possession in 1985.

The team behind the Copa took over the spot with entrepreneur Murray Ball and rebranded it as RPM. 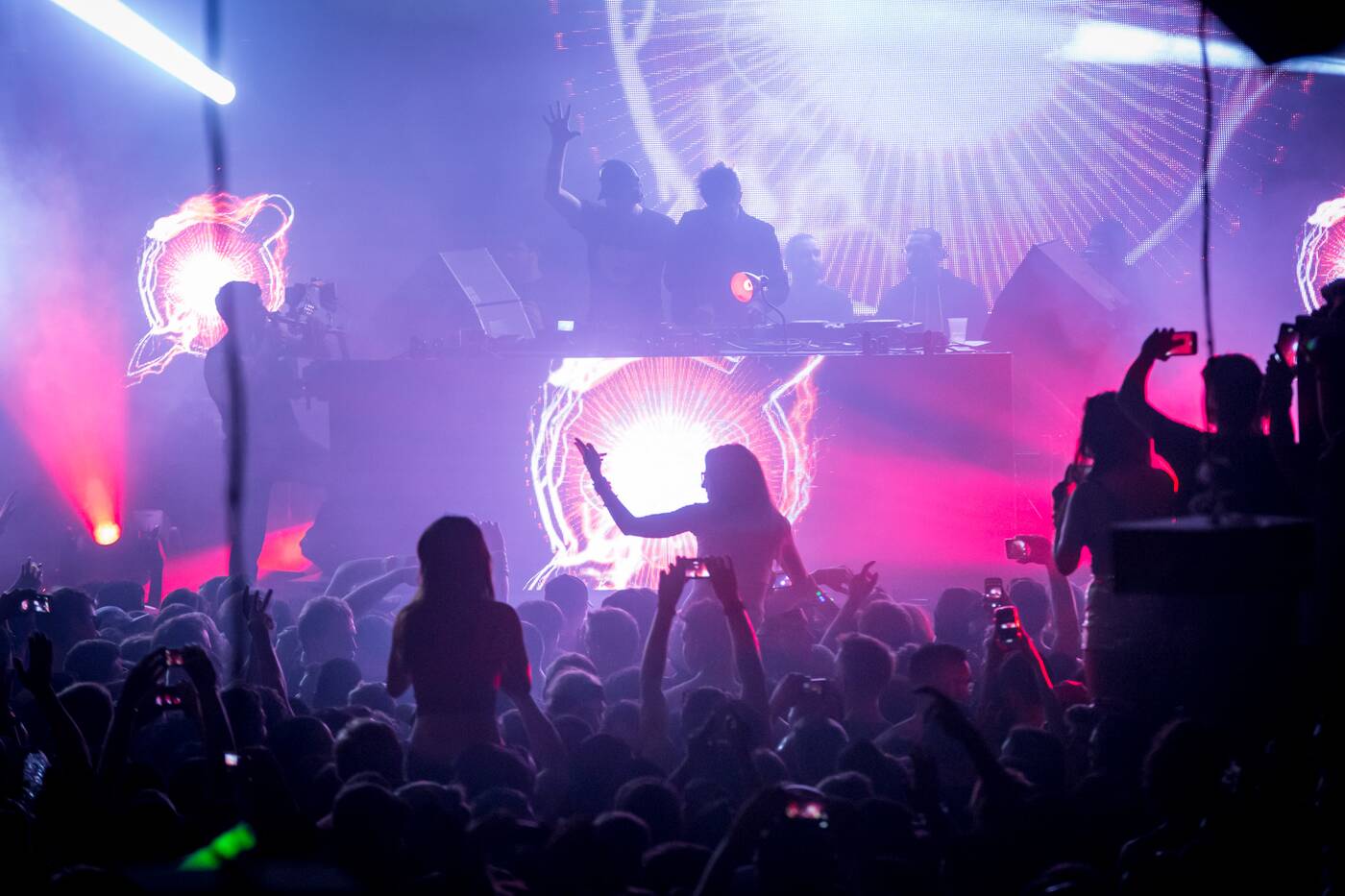 Inside the Guvernment. Photo by Jesse Milns.

The main resident DJs Terry Kelly and Chris Sheppard had both cut their teeth at the Copa, and brought with them a knack for bridging the underground rock and dance music scenes.

The combination of wildly popular all ages nights on Sundays and live-to-air radio broadcasts on CFNY turned on a whole generation of kids to early rave and industrial dance music, and helped make Chris Sheppard into local superstar DJ.

RPM was also where DJ Matt C got his start playing big rooms, who would later co-own Industry Nightclub.

Alongside the DJ nights were a steady stream of live acts, ranging from emerging alternative rock bands like the Jesus and Mary Chain (who were arrested for assaulting fans with a mic stand) to superstars like the Rolling Stones (who played a surprise show there in 1994). 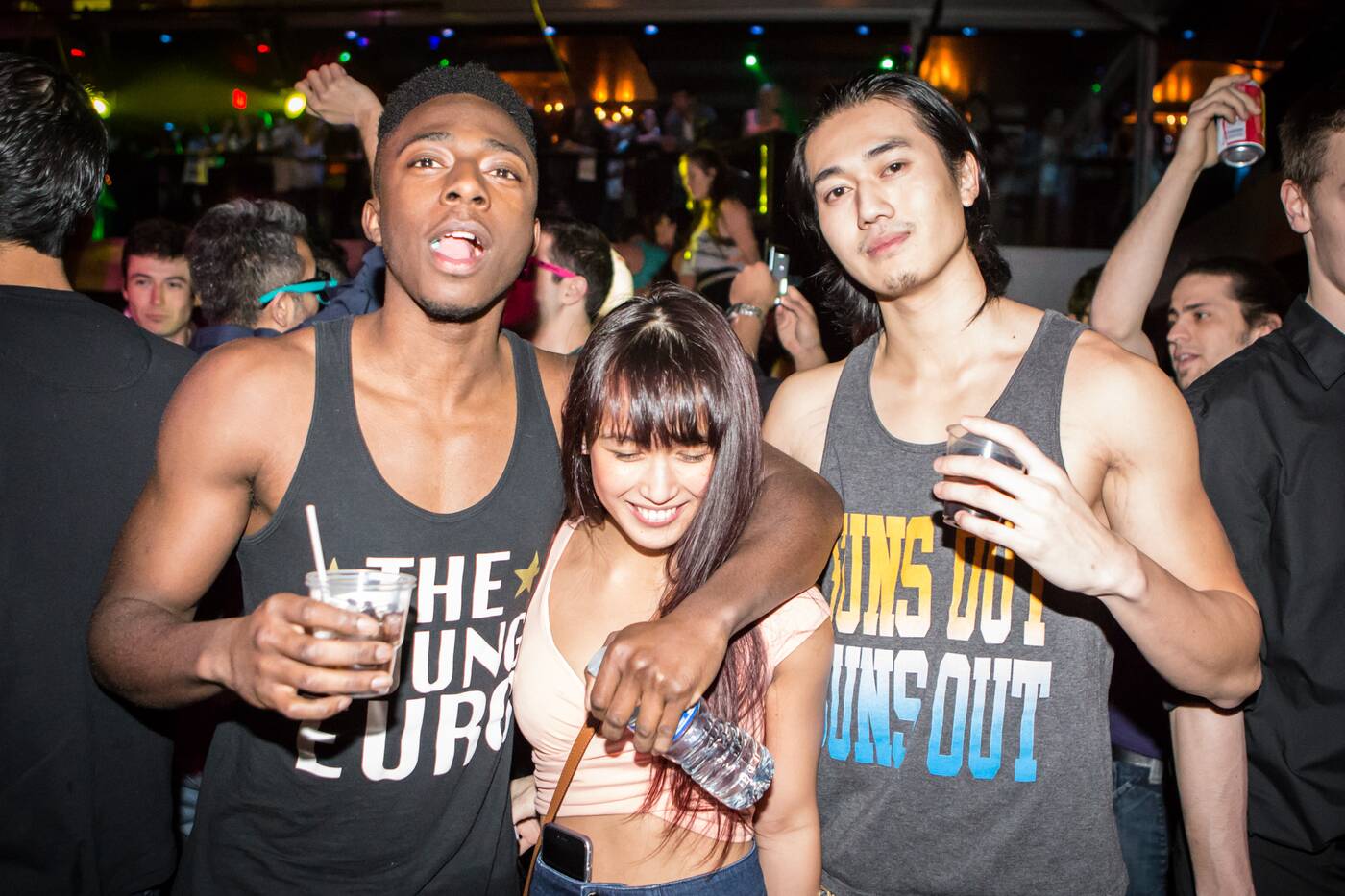 There was no place quite like the Guvernment nightclub. Photo by Jesse Milns.

That live music side of the venue had expanded in the early 90s, when the adjoining club the Warehouse was opened to accommodate shows that were too big for RPM. It was probably one of the only places where both Bon Jovi and the Cramps have played.

By the time Charles Khabouth bought it in 1995, most of the original team had splintered off, and the club was no longer the hotspot it had once been.

Rather than attempting to revive the raw rock'n'roll dance club appeal of RPM, Khabouth went for high production values and glitz.

Already a major player in Toronto nightlife going back to the mid-80s, Khabouth had previously owned popular spots like Stilife and Club Z, but the Guvernment was on a whole other scale.

In an attempt to cater to a wide range of musical tastes, a number of smaller lounges and bars were built throughout the complex, as well as the rooftop patio Sky Bar.

The former Warehouse was rechristened Kool Haus, and for some events was combined with the Guvernment for mega-parties that attracted as many at 10,000 people.

A ticket stub for The Guvernment.

While the maze of mini-clubs was definitely a selling point for many, it was the main room that made the Guv what it was.

The ultra high end sound system designed by Steve Dash was the focus of the room, and was the only part of the club that wasn't replaced in the various renovations over the years. 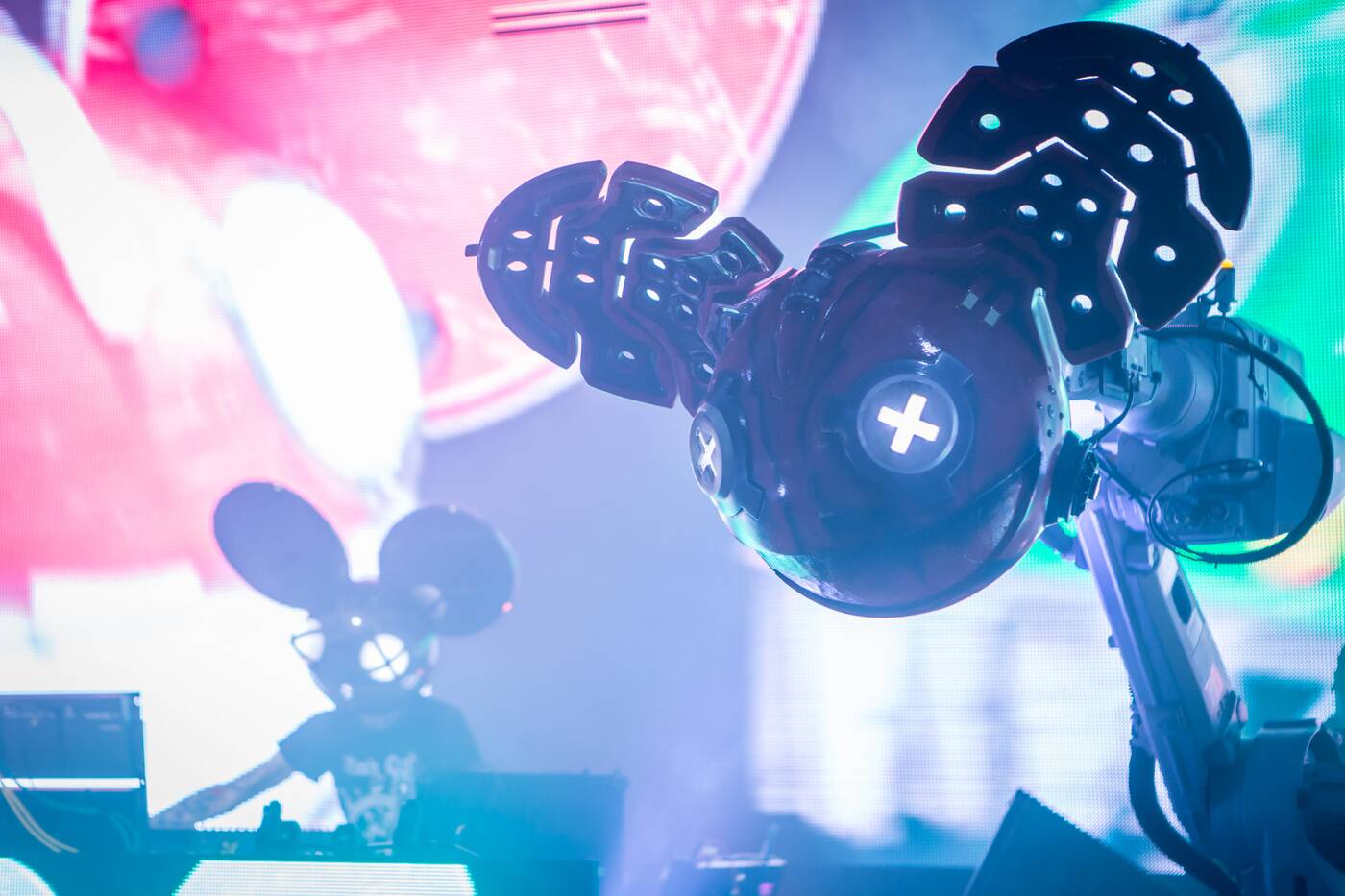 Deadmau5 at the final night at the Guvernment. Photo by Jesse Milns.

The suspended wooden dance floor installed with it had to be redone every year, but is was a subtly essential part of the sonic experience.

Pretty much every EDM superstar in the world has played there, from Deadmau5 (who played early shows in the Orange Room) to Tiesto, but a big part of the club's identity had long been the sets of Saturday night resident DJ Mark Oliver, who'd previously played for Khabouth at Stilife.

His weekly marathon performances were pretty much the only other aspect that has escaped the cycles of remodelling.

While he at one point DJed funk and soul in the back room of the Cameron House, at the Guvernment he honed an approach to big room sounds that kept the crowds coming back.

The Kool Haus had long been one of the only club venues of its size in town for live music, and as a result had been used by most major promoters in town over the years.

Inside the Guvernment on the final night. Photo by Jesse Milns.

While fans had been known to complain about the airplane hanger acoustics of the space, most agreed that it was still a better sounding big room than its main competitor Sound Academy (now Rebel).

In August 2000, tragedy struck when 24 year old bouncer Howard Gairy was killed after being shot three times in the chest by 19 year old Quentin Danvers, who would later be sentenced to life in prison.

His murder remains one of the more notorious incidents of violence in the Toronto club scene, and a sad reminder of why security guards insist on patting you down.

Khabouth's empire of restaurants, bars, clubs and hotels continued to grow, and his INK Entertainment is also behind the giant Veld Music festival.

The final year of partying at the Guvernment saw most of the world's most famous DJs passing through, and its closure left a major hole in both the dance music scene and the live music venue pool. 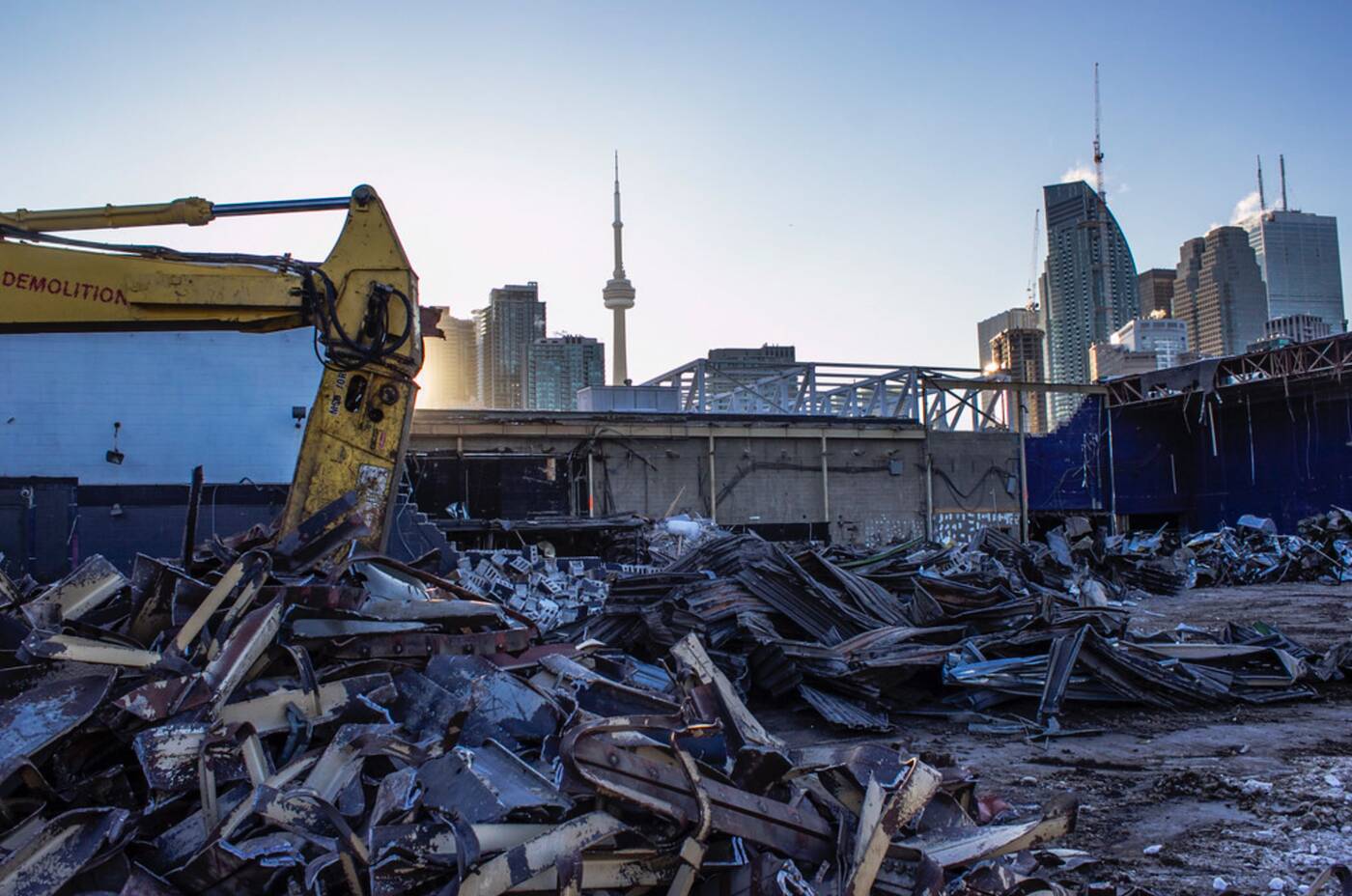 The Guvernment after it was demolished to make way for Daniels Waterfront. Photo by Iwontell.

The site that once was home to the Guvernment is now part of the Daniels Waterfront.