A brand new concert booking duo made up of Toronto music industry buffs from Weird Canada and Silent Shout launches in Toronto this weekend. Jesse Locke (Weird Canada editor) and Tom Avis (Silent Shout) recognize the power in collaboration, and have teamed up to bridge the gap between their two eclectic musical worlds with concert promotion company No Visible Means.

Locke and Avis each have individual tastes in music, and tend to bounce back and fourth between the electronic and indie rock spectrums. Yet they agree on bands more often then not, and plan to fuse together complementary show lineups. Aside from the bloggers' harmonious sonic preferences, they also have their own respective fields of industry expertise, contacts, and resources to pool to cover more ground both talent and venue-wise, so they're a good match for each other - and for Toronto. 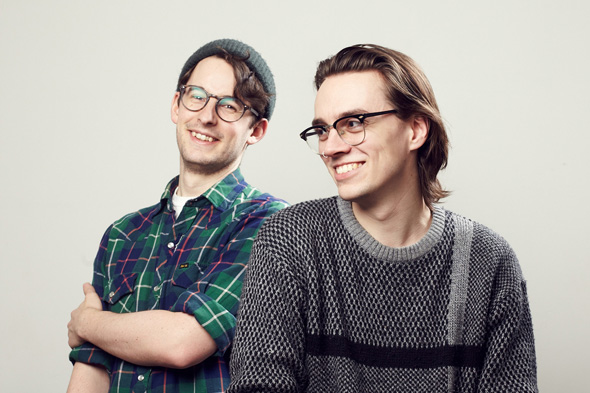 A job in the music industry means a daily flood of emails from bands looking to share music, promote tours, spread the word on new projects, and book live shows. Locke and Avis have struggled to schedule gigs for every band or musician that piques their interest, and there lies the spark that fuelled No Visible Means' creation: a desire to provide a worthy outlet for these acts.

"The motivation for working on No Visible Means was that we were both finding a lot of shows we wanted to put on that didn't necessarily make sense for Weird Canada or Silent Shout," Avis explains. "I think our interest is in working in the space between these two organizations, which already share a lot of common ground. We hope to put together bills that expose people to bands we're excited about that they may not have heard before."

The other key part of their vision is exploring alternative venues. They're committed to NVM being a DIY engagement, and prefer to keep their shows on the eclectic side of things beyond merely the acts they book. By inhabiting some atypical spots they aim to provide both bands and audiences with visually interesting, intimate atmospheres, meaning No Visible Means will join a handful of other promoters in the city who strive to move music out of the predictable clubs and into spaces that are affordable (never more than $10), unique, and accessible for everyone.

In terms of future show venues, the landscape for DIY spaces is constantly shifting, so they plan on playing it by ear, but name Double Double Land, The White House, Izakaya Sushi House, and even outdoor spaces like the dog bowl and the Etobicoke skatepark. While the project doesn't have a website yet, stay tuned to Weird Canada and Silent Shout or follow Locke and Silent Shout on Twitter to hear about future shows.

No Visible Means' first show is Saturday, March 8th at Oz Studios (134 Ossington Ave). The line up features Gay, Bile Sister, who we named a Toronto band to watch for 2014, Montreal's analog-loving radiophonic wizkids Freelove Fenner, and the mind-expanding Man Made Hill. Doors open at 9pm and $5 gets you in the door.

Lead photo of Freelove Fenner at a Weird Canada show by Julie Lavelle. No Visible Means photo by Rico Moran