On Sunday night, there was a decent sized crowd already in attendance when I arrived at 8:30pm. DJ Sosa was spinning some solid hip hop tunes (mostly music from headliner Brother Ali's fellow Rhymesayers artists) in the mid-sized Annex Wreckroom. A few minutes later a sound-check occurred (one of a few throughout the night) and couple-duo group The Reminders took to the stage (another hip hop show starting on time - what is the world coming to?).

The Reminders are a soulful hip hop group consisting of Queens, New York singer/rapper Aja Black and Brussels, Belgium emcee Big Samir, who admitted he was feeling under the weather. They performed some up-beat, back and forth raps and overall positive, uplifting songs, with Aja Black frequently taking the spotlight with her high-pitched, well-tuned vocals. Big Samir displayed dynamic bilingual flows (rapping in both English and French, which the Toronto crowd seemed to love), and the two artists had pretty good chemistry, despite Aja's vocals overpowering Samir's at times.

Most of their songs conveyed empowering messages about love and self-determination, but they weren't afraid to get a bit more rugged early in the set with a song warning about what happens "When the Lights Go Out." They did a short dub to "If I Ruled the World," with Aja Black singing and Big Samir reciting a familiar variation of Nas's verse, creating an intimate, nostalgic vibe with a crowd of over a hundred people. 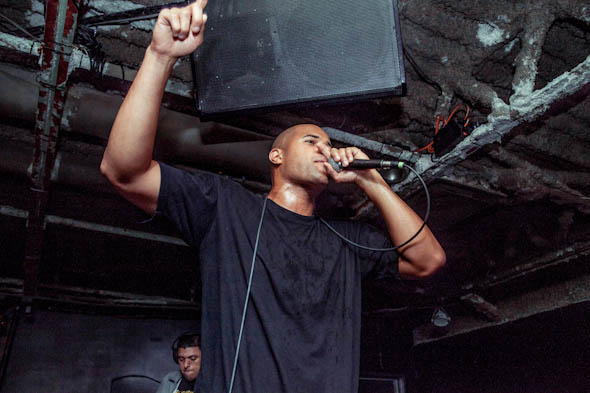 Up next, Stones Throw Records artist Homeboy Sandman hit the stage and in one of his first songs, "The Carpenter," Homeboy Sandman began to rap with a style I've seldom heard before. His rusty, abrasive voice and half tone-deaf intonations took a bit of getting used to, and although he was screaming into the microphone half the time, he didn't project his voice very well.

He did, however, display amazing breath control--or perhaps abnormally large lung capacity--with his rapid fire, off-beat flows. He then said he was going to spit an "Acapulco" (i.e. acapella), in which he did a comical, half-singing rap with varying tempos. Homeboy Sandman got progressively more hyper as he performed his songs, especially after one track in which he emulated some kind of alarm on the chorus screaming "eh eh eh"--the crowd responded positively. 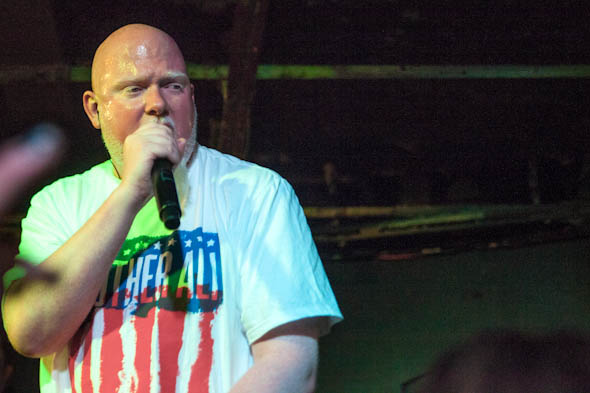 Then, Ali's four-person band began to set up. Consisting of keys, guitar, brass instruments, and drum machine, they played some triumphant instrumental entrance-music before Brother Ali appeared. The crowd now numbered in the hundreds and they squeezed towards the stage in anticipation as he began to rap "Stop the Press," a powerful song off his new album, Mourning in America and Dreaming in Color, recalling the ups and downs of his life and career. 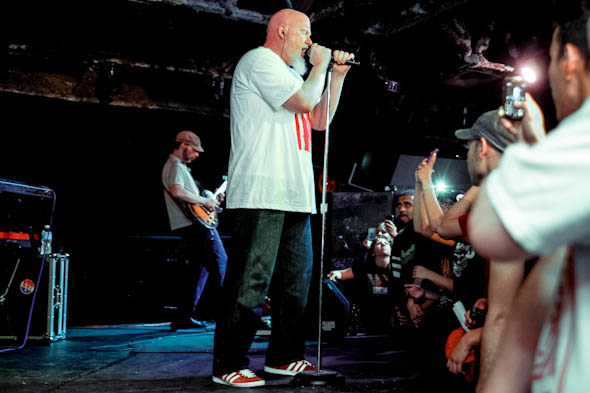 It was refreshing to me that Brother Ali's vocals were highly audible and mixed well in the venue, which is often a major problem with live band accompaniment at hip hop shows. Throughout the night, Ali demonstrated his party-rocking emceeing abilities, interspersed with thought-provoking, heart-felt songs. He got everyone's hands in the air before performing "Only Life I Know" and "Work Everyday," two songs about the futility of trying to "make it" in a capitalist system where the odds are against you. 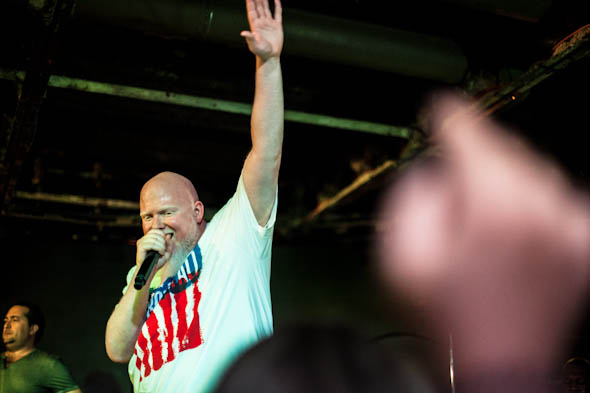 Brother Ali and his band kept the set variable and entertaining, with a jacking-for-beats segment in which he spit some verses over live versions of Mobb Deep's "Keep it Thorough" and Dr. Dre's "Still D.R.E." He prefaced his next song, the highly politicized and hyper-critical-of-America "Uncle Sam Goddamn," saying "I got in a lot of trouble for this song, so I hope you enjoy it," to which the crowd responded enthusiastically.

Ali then took an interlude and began drumming on an electronic drum-kit, accompanied by trumpet and saxophone solos, before breaking into his new album's title track, "Mourning in America," in which his sax-man busted out a flute and began playing it. Ali then took the time to speak directly to the audience, saying that optimism was a "luxury of rich people" and that his music was rather about hope, which is about acknowledging suffering while also believing in the ability to improve situations. "On my previous albums, I was inviting humanity to unite," said Ali, "but now I'm done inviting - I'm demanding it."

Brother Ali gave a courageous performance, tearing up and needing to take time turned away from the crowd to regain his composure on one particularly personal song about his son. He explained that he often relives the joys and pains of experiences every time he performs his songs, only adding to the credibility of the honesty that permeates his songwriting. He went on to perform some of his well-known singles, including "Self Taught" and "Fresh Air," before performing, "Letter to my Countrymen," which he said was a song he'd been "trying to write [his] entire career." For an encore, he invited his "favourite hip hop group" and "favourite independent artist" (The Reminders and Homeboy Sandman) back to the stage to rock the mic one last time for the night.

If you missed Brother Ali's "Mourning in America and Dreaming in Colour" show in Toronto, I urge you to get out to one of the upcoming tour dates and experience it for yourself. It was a powerful evening, and the message and the vibes of that night still resonate with me days later.