Sleek and stylish may not have been the first descriptors that came to mind for those first hearing Forget, the debut album from George Lewis Jr.'s Twin Shadow project. Nevertheless, it's what a few hundred fans got Monday night, as an enthusiastic Lewis and his three-piece backing band played the first of a two-night stand at Lee's, temporarily keeping the impending workweek at bay for the crowd on hand.

Over the course of a 75 minute set spanning most of Forget and the just released follow-up, Confess, Lewis and Co. did a commendable job of justifying the seemingly endless hype surrounding the band.

Kicking things off for the night was L.A.'s Poolside. Comprised on record of singer/bassist Filip Nikolic and multi-instrumentalist Jeff Paradise, Paradise stuck to a keyboard and sampler while a live drummer laid down some bare-bones backbeats and an additional keyboardist (with impeccable afro) added extra grooves. They were confident but unassuming, turning out a short set of their self-described "daytime disco" with limited enthusiasm but impressive musicianship.

They stretched their songs languidly, getting a good portion of the early crowd dancing to hypnotic basslines and Nikolic's hushed vocals. Rarely allowing their songs to reach the catharsis so often employed by the night's headliners, the set was a success despite its relative lack of dynamics. The understated approach is certainly one Nikolic and Paradise can cultivate to their success, though, if a mid-set cover of Neil Young's "Harvest Moon" is any indication. Deftly transforming the lovelorn acoustic ballad into dancefloor-ready pseudo-R'n'B is no easy feat without a requisite amount of cringes, but Poolside did just that. They just recently released their debut LP, Pacific Standard Time, just a few weeks ago, and I'd wager they're worth keeping an eye on. 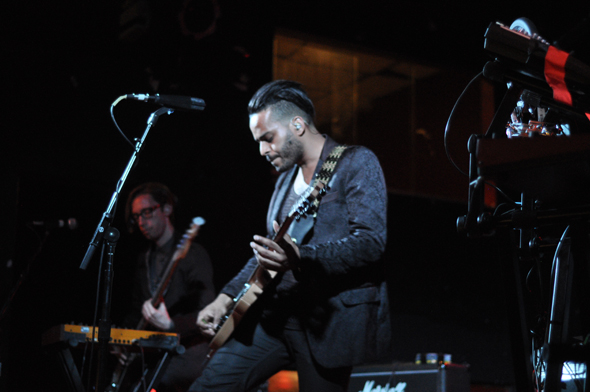 Forget echoed the very best of '80s new wave, filtered through a homespun bedroom pop approach in musicianship. Anthemic choruses nearly broke through on could-be hits, barely hidden underneath a healthy smattering of reverbed drums, airy synths, and Lewis' smooth, dynamic croon. It plays like a dance-rock hybrid reluctant to dance, but the band's live configuration is anything but sedate.

As soon as he hits the stage, Lewis downplays the glum melancholy that often comes across in his lyrics in favour of animated, glam-tinged guitar heroics - more Marc Bolan than Morrissey. A bright yellow strobe was positioned dramatically beneath the frontman, putting him into the spotlight and casting a mean shadow during buildups and searing solos.

While the majority of the show's energy was powered by Lewis' affability and enthusiasm, his backing band was integral to effectively translating his songs live. The sound was filled out by Lewis' sometimes studio collaborator Wynne Bennett, who, surrounded by a rig of synths and a laptop, kept the chilly textures of older tunes such as "Castles in the Snow" intact. In tandem with a touring rhythm section that infused new tracks with the necessary drive to match their slick studio counterparts, the band were impressively proficient. Lewis has said that much of the new album was inspired by his love for motorcycles and a Dylan-esque near fatal crash he experienced a couple years ago, and this high-octane energy shone through in the extra muscle the band gave to tracks old and new. 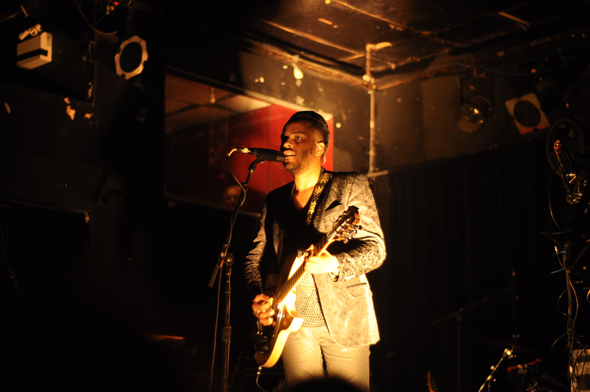 That said, and despite the popularity the band is currently enjoying with Confess, it was the reworked songs from Forget that got the biggest accolades of the night. Following a solid solo opening song, his bandmates joined him to launch right into "Five Seconds," the propulsive first single from the new album. For a moment, the reverb on the guitar and drums looked to overpower Lewis' clean vocal delivery, and the mix was muddy as a result. It didn't take very long to resolve the issues, though, and by the third song, "Tyrant Destroyed," the sound was balanced, successfully making Lewis' early songs arena-sized without sacrificing any of their subtle charm or sonic nuance.

Lewis' romanticizing of the classic, larger than life rock star of yore is obvious in the aesthetics of Twin Shadow. Motorcycles and ever-changing hairdos populate his tour iconography (this was the "Ton Up" tour; last year's stop at the Mod Club was part of the "Clean Cuts" leg), and so far, he's two for two on being the focal point of his album covers. Monday saw him take this a step further to humorous ends, with a life-sized cardboard cutout of himself positioned at the merch table. While it's true that such an approach could easily give ammo to naysayers claiming style over substance, it's obvious that Lewis knows his way around a melody.

Much of his work resonates without being overwrought, almost effortlessly getting lodged in your head. However, being able to layer your songs with studio flair is one thing; bringing them to a live setting is another entirely, and Lewis and his band do not disappoint.