Digitalism spreads the love at the Mod Club

Digitalism's one and a half hour set at the Mod Club this Tuesday succinctly demonstrated why a band with a static — and some might argue, dated — sound continue to garner new fans as they play around the globe. Their enthusiasm and evident fondness for their own music was translated on stage as a manic display of bouncing, hopping and grinning, while they amped it "up to 11" and performed songs from their latest album "I love you dude."

Openers Data Romance (depicted below), a Vancouver-based duo, played a gripping set that started the night off on the right foot. Flirting with a combination of dark electro beats and ghostly vocals, singer Amy Kirkpatrick and instrumentalist Ajay Bhattacharyya threatened to steal the show before it even began. 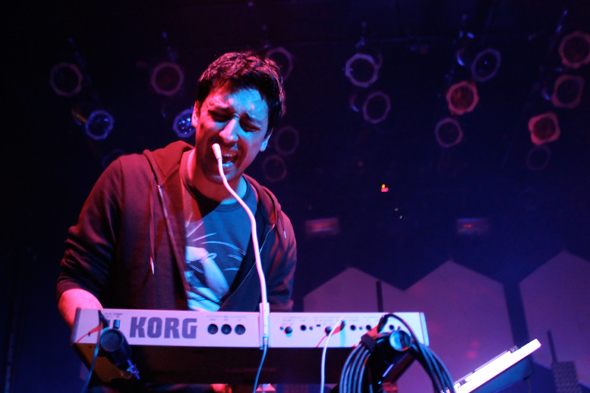 The audience, largely staring unblinking save for the occasional "we love you!" yelp, appeared mesmerized by Kirkpatrick's wafting croons against the backdrop of Bhattacharyya's delicately droning slow jams. Unfortunately, their laptop crapped out just as they were getting into full swing. Perhaps for Digitalism's sake, it was for the best.

The German duo Jens "Jence" Moelle, Ismail "Isi" Tufekci and their tour drummer began their set with a 10 minute glitchy jam. The intro established the tone for a night of Euro-club vibes, complete with distorted filters and arpeggiated bridges. With heads lowered, bobbing in time with that characteristic bounce, they turned knobs and beat their pads in a throbbing, bass heavy monsoon.

As I mentally attempted to transport myself to a Berlin club at 4 a.m., high on ecstasy, as I'm sure this concert would be best enjoyed, the boys segued into their Julian Casablancas featured "Forrest Gump," marking the first of many contrasts between their hooky, vocal-heavy tracks and more obscure electronic instrumentals. Both the former and the latter were played in equal measure, resulting in a pronounced distinction that almost felt like two different bands switching off. 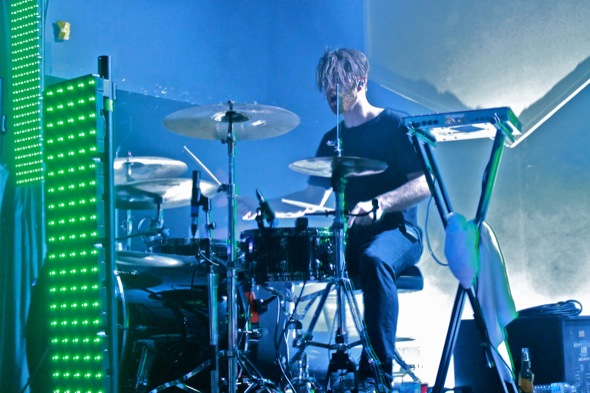 Throughout the evening, the Jence-fronted vocal tracks stood out as the crowd favorites, proving that everyone loves a charismatic front man. Tunes like the extended and chopped "Two Hearts," "Circles," and "Pogo" had the first five rows thrashing about, greedily feeding off the impressive amounts of energy emitted by the singer. The emoting melodies of instrumental "Blitz," however, might have had sweat-slinging hipsters dancing the hardest of any track played that night. As an aside, I found it particularly amusing during "Blitz" when all three guys crouched down for the bridge, then popped up in unison like jack-in-the-boxes when the bass came back in. Oh, Europeans.

Perhaps the most unexpected and pleasing aspect of Digitalism's concert however, was the way it crescendoed as the night went on. What started off as an inverted display of head bobbing opened up into anthemic chants, soul claps, and a genuine exchange of gratitude between band and crowd. We were thrilled to be a part of their energy and they couldn't have been happier to give it to us.

While Digitalism's musical stylings are nothing new — influences like LCD Soundsystem, Daft Punk and The Prodigy shone through loud and clear — their friendly attitude and notable stage presence made watching them a treat. Digitalism didn't have a Berlin club oozing with drugs at 4 a.m. to perform to; instead they had the Mod Club at 10 p.m. on a Tuesday, but they made the best of it, and the crowd loved them for it.