On a rainy Tuesday afternoon, strangers gather at No One Writes To The Colonel to sing Squeeze's "Tempted." They look over their sheet music, split into high, middle and low key registers and sing their hearts out, turning the forgotten 80s song into a robust execution of love. They are Choir! Choir! Choir! and they have strength in numbers. Last week, 110 people came to choir practice for the chance to take on Fleetwood Mac's "Dreams."

The choir has only been operational since February 2nd and was founded by Nobu Adilman, a radio and television personality for CBC, and Daveed Goldman, the owner of Annex brunch joint Aunties & Uncles. Adilman proudly calls them a "no commitment choir." For the price of five bucks, anyone can join for the week's practice. (The fee covers the cost of the sheet music, the practice venue, and keeps the group afloat.) So far the choir has practiced close to 50 songs across all genres, including covers of Elliot Smith's "Battle Of Big Nothing," Slade's "Cum On Feel The Noize," and a glorious take on Loverboy's "Working For The Weekend."

After their cover of "Run To You" was recorded for the CBC's "Cover Me" competition, Bryan Adams sent them a complimentary tweet calling them "brilliant." Their cover of Sloan's "Everything You've Done Wrong" even wormed its way into a documentary on the band's 20th anniversary. 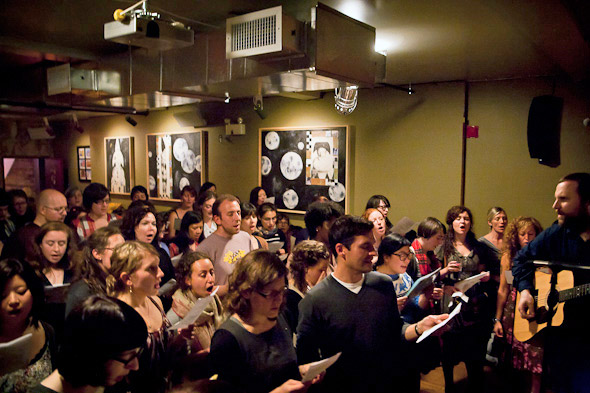 Neither of Choir! Choir! Choir!'s co-founders anticipated that 110 people would show up in the middle of the week just for the chance to sing. Says Adilman, "I've never been in a choir before. I've always sang, but I didn't realize that people were looking for something like this where they could go out and not necessarily get shitfaced."

Adds Goldman, "Once you start singing something and you start getting into it, you're like, 'Well I don't really need to drink.' You can, but you're already letting it all out, so it's not like you're standing in a bar wondering if you should talk to someone. You're engaged." 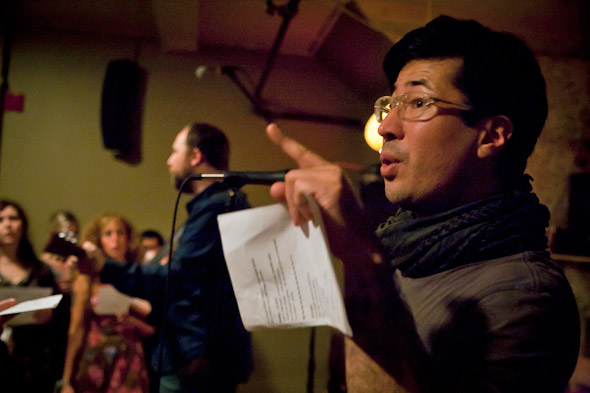 The project was inspired by an impromptu 13-person choir Adilman coordinated as a surprise birthday present for a friend last October. It was such a smashing success that as soon he posted the idea of starting an official choir on Facebook, over 200 people immediately joined the group. (Today the group has over 900 members.) On their first practice they tackled a cover of The Beatles' "Nowhere Man."

"Right away we had people asking if we could do it the next day," says Adilman. "And we were like, 'We'll do it the next month,' and they were like, "Can we just come back tomorrow and do it?' So we did it the next week and it's just been snowballing ever since." 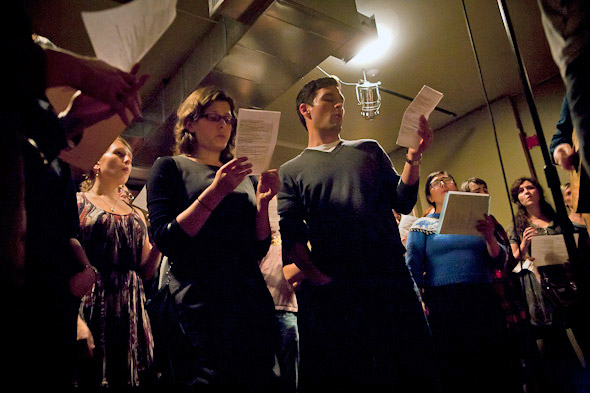 It's one thing to perfect your cover of "Go Your Own Way" in private, but a large function of being in a choir means singing in public. Choir! Choir! Choir! are constantly booking gigs where the 50-something mass turns into a jubilant group of rock stars. Their upcoming events include a film premiere at the Reel Asian Film Festival and secret flash mob, but the possibilities are endless.

Though Choir! Choir! Choir! are getting better all the time, Adilman and Goldman have hopes for the future. Adilman wants to eventually tackle The Beach Boys' "Forever," with complicated three-part harmonies. And Goldman dreams of a 50-person choir backing him up at dance party Loving In The Name Of complete with a full brass band. 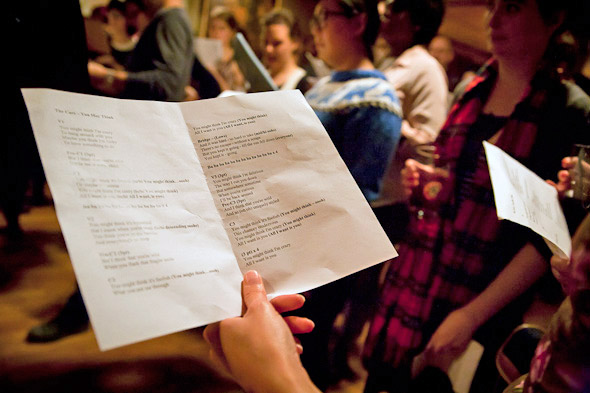 Choir! Choir! Choir! already have a 50-song repertoire in their back pocket. They have the manpower and they have solidified a reputation as the best damn no-commitment choir in the city. The only problem is their image.

"We haven't delved deep into the fashion and choreography," admits Adilman. "But it's hard to do that in a small space with 110 people. Also some people are like, 'What the fuck? I'm not here for that. I just want to sing!'"

Regardless, Choir! Choir! Choir! seems like a powerful place to belong. In an article for The Toronto Standard, choir member Christina Palassio writes, "Choir! may be dangerously addictive, but I can't see myself ever suffering from a Choir! hangover. These days, I think about what songs we should sing at choir more than I think about, well, anything else."