Amberhaze is a solo project by Giuliano Gulotti. He released his first full-length album Then we saw the stars again last November on a Singapore independent label and the album is being reissued on his Bandcamp page.

In the depths of winter, I happened upon Amberhazes' new Raleigh EP, sent to my mailbox by the kind Giuliano himself. When I told him how much I loved the EP, he sent me a copy of Then we saw the stars again, a texturally-rich instrumental album. I thought to myself that music like this doesn't come around too often, so I didn't want to pass up on the chance to interview Giuliano.

Your album title Then we saw the stars again alludes to the journey in Dante's Divine Comedy. What has the journey of creating this musical diary taught you?

The title came almost naturally for a few reasons: I had to undergo spinal surgery during the song-writing stage, and I started recording literally as I was recovering and lying down on my bed. A laptop really helps for that, so I laid some beats down and started sequencing the songs in the album. My grandmother passed away at around the same period, and that must have influenced some of the darker tracks in the album. But at the same time, other songs focus on happier things, and I thought the image of Dante emerging from Hell and looking up at the stars at the end of Inferno made sense.

Also, I still consider myself Italian, even though I only lived there until I was 4. And Dante's Divine Comedy remains one of the most beautiful and relevant volumes of Italian literature to this day.

I listen to electronic and instrumental bands like mĂşm and M83 when I want to read or get inspirations for writing, which may be why your music feels familiar to me. Do you ever worry that people might not "get" your music? Like, am I missing the point of your music in any way? Do you imagine an ideal listener for your work?

When I started my Amberhaze project I made a few changes to the kind of music I was recording before, which was more song-based and pop-oriented. Maybe if I had been a better vocalist things would be different now, but I realized I felt more comfortable making instrumental music. There are some drawbacks to this, and to a certain extent it doesn't have the same instant appeal as a more traditional indie band, but I didn't let that influence the way I was going to record. It might be harder to get exposure at first, but I've found that instrumental music fans (be it post-rock or the more experimental fringes) are very supportive and curious. So rather than focusing on a wider audience not always 'getting it' and worrying about that, I'd rather focus on the listeners I can share a connection with. I wouldn't want to have an ideal listener. Instead, I'd like everyone to experience the music the way they want to: instrumental music can be more open to interpretation sometimes.

From a very young age, one of your aspirations was to become a (music) conductor. How did your family react to this dream? How did music fit into your childhood?

There was music in my house for as long as I can remember. I grew up listening to a lot of Classical and took piano lessons, but when I realized I wasn't ever going to get a decent recital level, I got more into pop and guitar-oriented music. I think my grandfather was my biggest influence, and he single-handedly funded my teenage endeavours. He got me my first Stratocaster and synthesizer. Plus, he was a little deaf, so he definitely was the best audience any 15-year old could ever have! 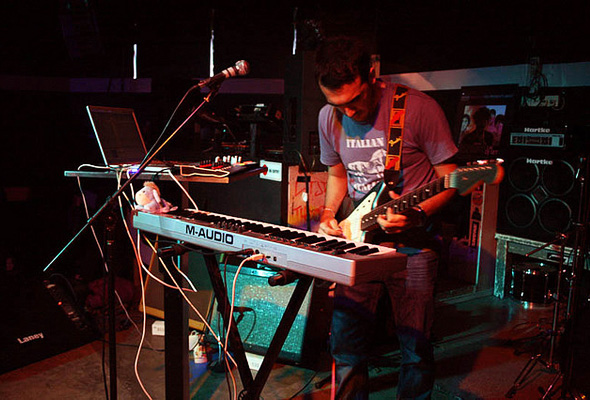 Landscapes play an important role in your musical creation. How is the imagery in Then we saw the stars again different from your new Raleigh EP? Is Raleigh solely about your experiences in Toronto, or is it sort of a hybrid with Singapore?

Actually, for an album that was recorded on the equator, Then we saw the stars again doesn't really sound tropical or particularly sunny! Singapore is extremely dense, and most of the people live in high rise buildings, which probably gave the album its more electronic and post-rock textures. Raleigh, on the other hand, owes a lot to Toronto, down to its title. A friend gave me his old bike, and that pretty much shaped my experience here so far: a new city where I can just reinvent myself. I know some friends here find it hard to believe, especially with all the debate in recent months, but this is such a great city for cyclists, believe me! Singapore is way more dangerous and I basically stopped using a bike for 7 years.

Each song in the record is very much inspired by what I've experienced ever since I relocated here last September. And the pictures that illustrate the tracks form a sort of audio/photo diary I suppose.

"1994" from Then we saw the stars stands out for me and is my favourite song in the collection. What's the significance of that year?

Thanks! I read a lot about teenage depression and unease these days, but if I think back on my teenage years, I remember a lot of good times mostly. And 1994 was a definite highlight: the last year of high school before exams, getting high at parties and spending an inordinate amount of time geeking out about indie bands on MTV (back when they actually showed awesome music videos and not the sad stuff they have now). Maybe our friends were real before we all got into Facebook, and we actually did things with them? It's not like we ever got anything done on the Internet back then anyway, so things seemed less virtual...

And then, there was that girl in class, and we all had a crush on her, in true high school fashion. This song is about her and all the girls who were 'out of our league'. 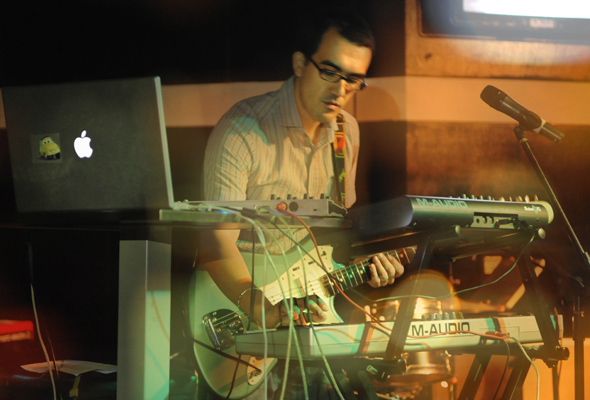 "The C.P.R." is a heavy-sounding, epic song. It's a song about the railroad tracks and the trains you see outside your window. Is there a literal angle to the song - as in resuscitation? How has your life been revived since returning to Toronto?

I actually hadn't thought about this interpretation. But now that I think about it, it works in a way. Life here is very different: I have chosen to work part-time to try and make more music, and that also gives me more time to spend with my kids. No one really cares about your lifestyle in Toronto, which is great. In Singapore there is an understanding that music is meant to be only a pastime, and once you are an 'adult' you should be responsible and only provide for your family. I mean, music is not paying the rent at the moment, and as it is the case for a lot of musicians, I still rely on another day job. But people take it seriously here. We make music for an audience, and even if we are not all 'professionals' we don't just treat it as a hobby either, right?

Although it's a short track, "The C.P.R. (Beyond Christie)" is such a cool song. It reminds me of sitting down at Christie Pits and then suddenly feeling a vibration on the ground as the trains pass underground. What's beyond Christie?

I feel this vibration every night! My home studio faces the railway, and even though I have to work around the C.P.R'S schedule, these trains never fail to amaze me. A few months ago blogTO posted a series of photographs taken on and around the railway, which I thought was really inspiring. So, 'Beyond Christie' is quite literal: where does the train go after it passes by our house? How long is this line? It really seems to go on forever, which is something that was alien to me until I came here.

Some artists are inspired when things are missing in their lives, yet here you are content and making beautiful music. What inspires you?

I react very strongly to pictures and moving images, and certain filmmakers are clear reference points for me: Terrence Malick, Michael Mann, Christopher Nolan, but also more intimate European directors. Sound patterns are also very interesting to me: how tones and harmonics overlap from my surroundings, the particular pitch of the subway against the chatter of the commuters, for example.

I'm also very lucky to have two beautiful sons and a very stable family life. I think I did things in reverse: Amberhaze only started after my second kid was born, and even though it means that I wouldn't commit to long periods of touring, the thought of coming home to the person you love, and to children who are completely devoid of cynicism and bitterness is priceless. It keeps you grounded and balanced, which is great when you go through the usual bouts of self-doubt and questioning. I can't ever imagine not making music, but these 3 precious people remind me that there is more to life than this.

Your kids drew the cover art for the beautiful track "Igloos and Forts", which is based on a special memory you have with your father. How do you share what you love with your children?

I've been showing my 5 year-old some of the movies I grew up with in the 80s, and it was great to see he was enjoying them the exact same way I did when I was his age. I mean, the live-action family-oriented movies these days are not as fun or ingenious as that golden 'Ghostbusters/Gremlins/Back to the Future' period, except maybe for "Where the Wild Things Are". This track is very simple and straightforward compared to other parts of the record. I think that's how I remember my childhood, and if I can make sure that my kids will see theirs this way too, I'd be happy with that.

You can purchase Then we saw the stars again and download his recent Raleigh EP for free on his Bandcamp page.

Also, check out The Neighbourhood Mixtape: Wasted Hours to listen to his epic "1994" and download "The C.P.R." below.