Accompanied by John Medeski, Billy Martin and Chris Wood, a trio of keyboards, drums and bass, Scofield captivates the capacity crowd for almost two hours with avant-garde improvisations that incorporate heavy doses of funk and blues with a modicum of bebop thrown in for good measure.

Free jazz at Nathan Phillips Square! Those too late or too poor for a $35 ticket into the Toronto Star Stage tent happily sit on the steps of The Peace Garden in front of city hall, easily within earshot of the show. While they may be a bit removed from the action on stage, those in the cheap seats enjoy the fresh air as the evening finally cools off.

Waiting for the concert to begin, I chat up three enthusiastic, young men. Sagie Henig (left) and Josh Braman travelled all the way from Cleveland, Ohio to attend the Toronto Jazz Festival with their friend Eshin Jolly from Rochester, New York. They're cheering from the front row as John Scofield hits the stage. 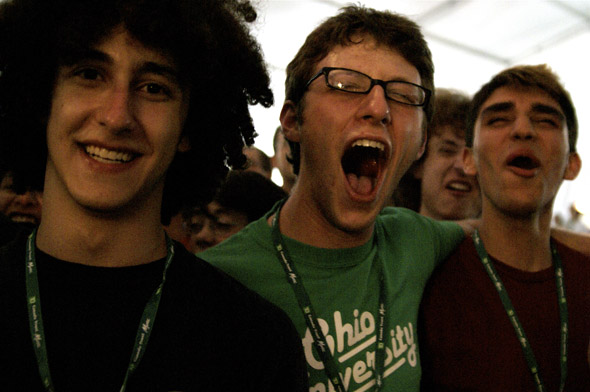 After the show I run into the three out-of-towners again and they're beaming. They just got a hold of the set list from the stage. It lists a mere eight tunes: Hanuman, Water, Tequila, Tubes, Cachasa, Deadzy/What Now, Julia and Miles.

"Water was my favourite from tonight," says Henig. "It's one of my favourite songs, but it's just sick when played live."

If you want to enjoy some great live music, check out some of the other offerings at the Toronto Jazz Festival until July 1. Tonight at 8pm you can catch the Roy Hargrove Quintet at Nathan Phillips Square. Get there early and you may even snag a free seat outside the tent.

Mini slideshow to follow, with more photos from the show (Flash required):