DJ Champion and his G Strings

Ry C here. I, unlike Kevin, have a little something called stamina. I'm also a vampire, but that's neither here nor there. Either way, I caught Champion's set which Kevin missed because he was all sleepy and the like. Wuss.

So yeah, Champion and the G-Strings capsized the fucking Boat. 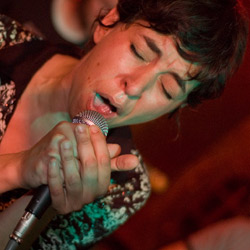 --
I saw these guys play the Phoenix not too long ago, and even on the big stage they managed to fill it up pretty tight.

The Boat's stage, in comparison, is about the size of my thumb. And I happened to notice that every member of the band, aside from tubular lead singer Betty Bonifassi, was wearing the exact same clothes as their show at the Phoenix. Someone get these guys a few loonies and quarters for the laundromat.

But dammit, gnarly clothes or not, these guys and gals set fire to The Boat. 45 minutes never went by so fast. Everyone was crammed in together, and they still went as nuts as they would if they had a U2 sized arena to jam on. They played a different set than at The Phoenix; hearing Betty sing "Die in Peace", whatever language it's in, was something very frackin' special. Also, if anyone there knows what tune they jammed to when they closed the set, let me know in the comments; did they say they were playing some Sabbath? Wasn't any that I'd ever heard before... 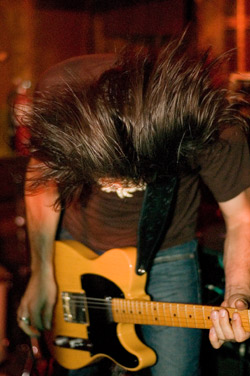 I've run into a few people now who have yet to see DJ Champion live. That number had best dwindle to zero people by the time he rolls into town again. DJ Champion and the G Strings come highly recommended as one of the most awesome gigs to ever stand on a stage. Twice now.

If you weren't at The Boat between 1 am - 2 am on Friday morning then you might as well have been watching reruns of Alf for all that mattered. I ended up heading to the poorly kept secret of a The Vandelles show at Silver Dollar afterwards, and what a freakin' let down that was; HEY SILVER DOLLAR SOUND GUY, the speakers don't need be turned all the way to eleven when there's only 3 feet between the stage and the bar. The Vandelles also needed some wake up pills, as that bassist, cute as she was, looked more bored than Oscar Wilde at the Playboy Mansion.

If you wanna see pics of Champion and Abdominal's sets, as well as some Grand Theft Bus and The Vandelles, hit up this Flickr set, courtesy of yours truly. If you'll excuse me, I'm running 3 hours of sleep, over the past 60 some odd hours; take that Beth!