A Toronto map for filmmakers and movie lovers

This map Toronto for visiting filmmakers and movie lovers by local super 8 filmmaker John Porter has been around for quite some time - according to Porter's Facebook, he's been "updating and photocopying this map for 14 years," a.k.a. the entire millennium - but now you don't have to approach him for a Xerox to find out where visiting artists should be hanging out in TO (though you still should - he's super nice).

Porter's 2014 version of the quirky Visiting Filmmakers' Map, now online with an accompanying Directory, is similar to sketchy, individualized maps I've drawn of the city myself over the years for artists and bands highlighting must-hit spots (The Skyline, Trinity's dog bowl, under-picked Goodwills - yeah, be my friend) but is much more thorough: Porter knows his stuff. While the map will tend to keep tourists away from east end jewels like Leslieville, The Beaches, Little India, and most of the Danforth, (plus Scarborough, Etobicoke, North York, etc) everyone has to start somewhere, right?

Essentials like thrift spots, "trendy strips," "Beer" and "Liquor TO" are paired with art supply stores and film hotspots like LIFT, TIFF, Film Buff, and the Metro (RIP). If all this stuff seems way obvious, imagine making a cold call to Toronto and trying to decipher a Google map unaided. 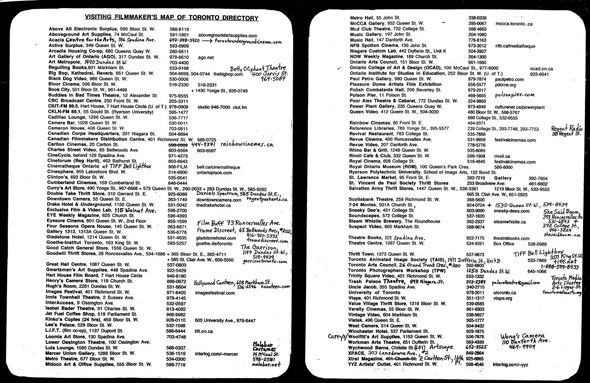 Get the hi-res versions here:

Porter encourages you to "add your own places, copy and colour for friends" - what would you add?