Toronto Arts & Fashion week sets itself apart with the extravagance and unabated display of creativity and artistic expression from the artists and designers that show each year. Last week, these five designers stood out for their truly imaginative collections that, though inspiring, may not necessarily be made for the streets. 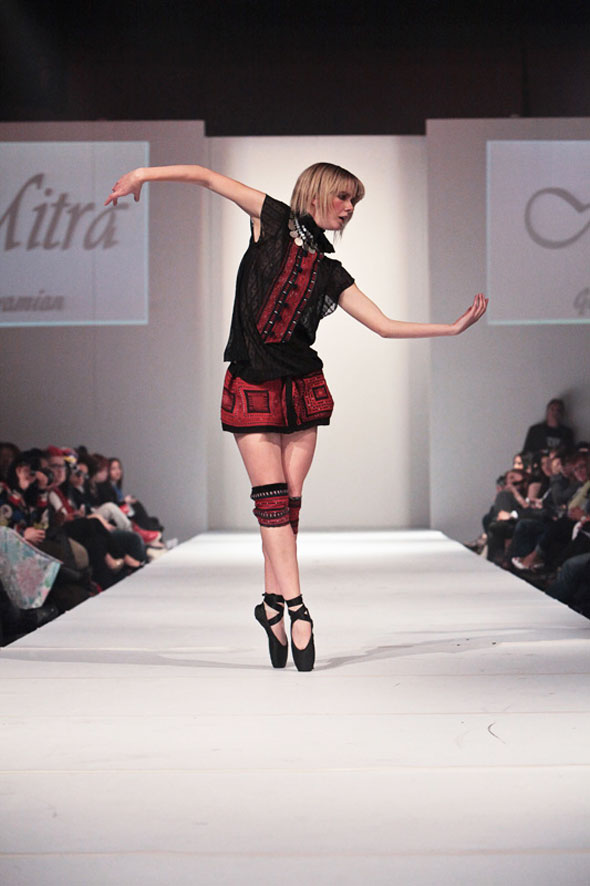 A flamenco-inspired ballet number stormed down the runway at Tuesday's Mitra show. Inspired by the tribe-like Ghashghaei who travel between mountainous regions in the summer and sandy desserts in winter, the collection featured intricately detailed textiles, loose knits, geometric patchwork and poufy skirts in vibrant hues of Kelly green, rust and turquoise. The drama of the presentation perfectly complemented the complexity of the collection. 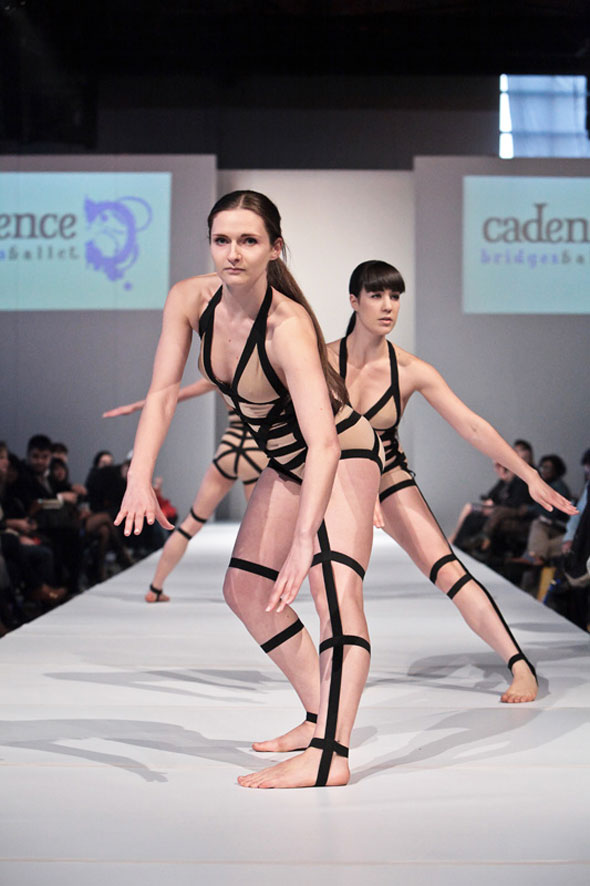 Though not technically a runway show, the performance by II I-Cadence Bridges Ballet on Wednesday featured fascinating performance leotards that wrapped long strips of black elastic around each dancer's body creating an almost geometrical rendering of their torso, legs and arms. As they worked through their modern dance routine, each movement was magnified by the illusion of structure. 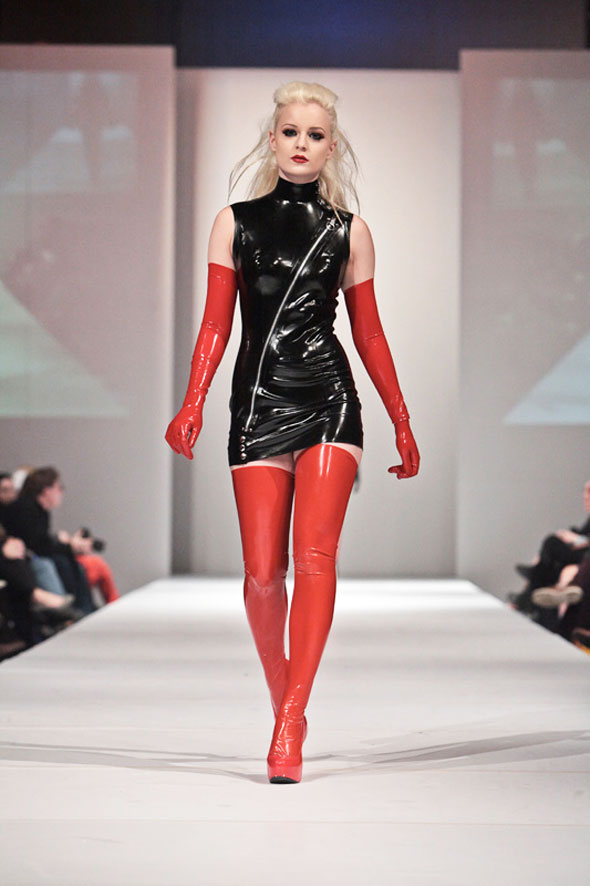 Rubber was made wearable (albeit not breathable) on Thursday with House of Etiquette's presentation of "desire transformed." Impressively cut bustiers, corsets, body suits, mini dresses, pencil skirts and jackets were given lady-like touches with peplum and a hard, sexy edge with zippers, garters and transparent rubber. Sea foam green, hot cherry red, and shiny black kept things sleek and sexy. 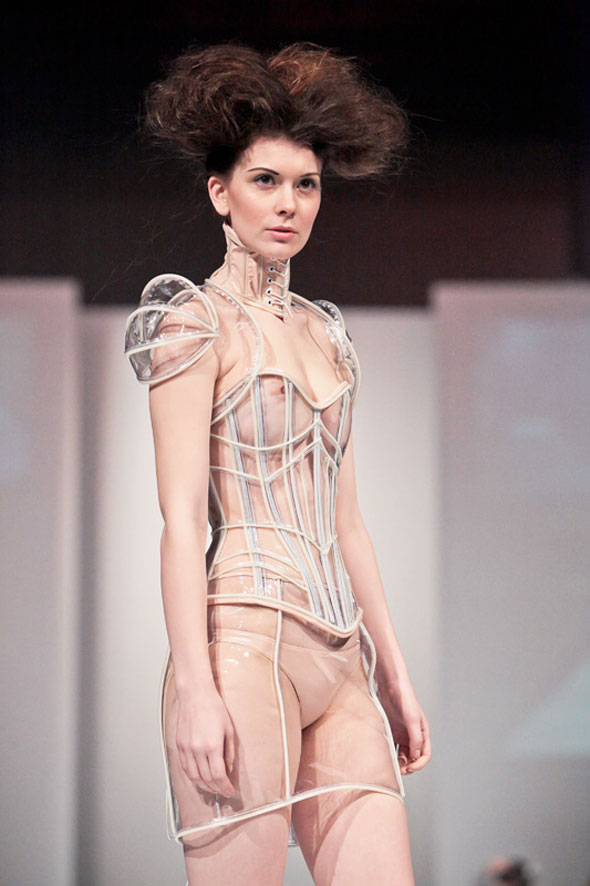 PVC is nothing new to [FAT] but the tightly cinched corsets from Artifice Clothing's collection on Friday took things to another level. Feminine pastels, ruffled sleeves, piqued shoulders, midriff-baring cutouts, hip pleats, peplum jackets and lace overlay rendered this fetish collection classy and elegant. Showing off the exceptional piping details on the garments, the studio lights were replaced by black lights allowing the structure of each garment to glow. 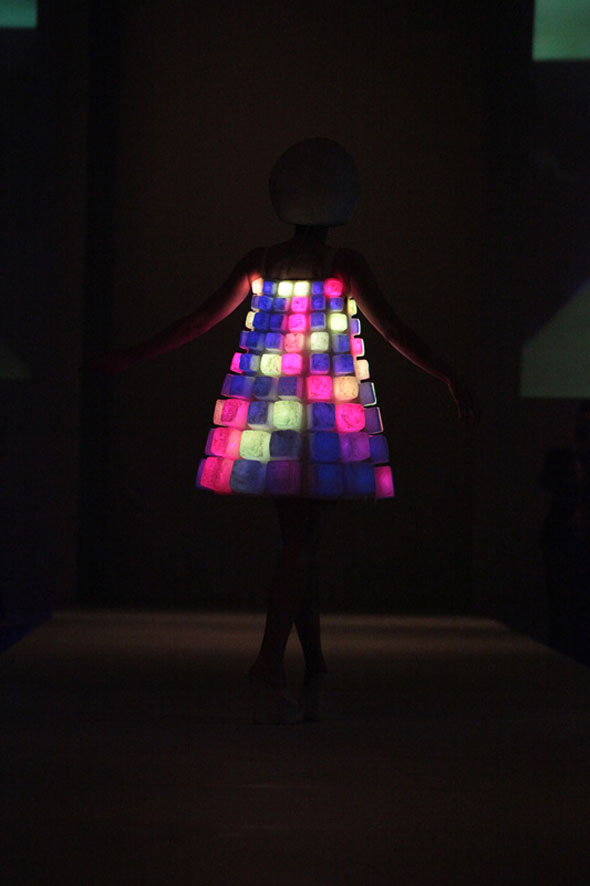 Lokum cubes resembling Turkish delight covered dresses and lit up to the sound of disco, video games and Egyptian pop music from the '90s. The idea behind the piece was to express movement and fluency between fashion, art, music and dance (but for the most part it was a quirky display of Light Bright-inspired clothing).