These days, workout clothes constitute as regular clothes: leggings have replaced slacks, hoodies are the new cardigans—and what is a button up? It's muscle tees only, dude.

If gym clothes are your daily attire of choice,  you won't exactly be welcomed with open arms at Louix Louis, but there are plenty of restaurants that don't mind. Best part: they're close to some of the most popular gyms in the city, and offer some good post-exercise meals (if you even worked out, that is).

Here are some restaurants in Toronto where you can eat in your gym clothes.

This healthy Financial District restaurant does without the snarky servers with a quick and convenient cafeteria-style set up. Sashay up to the counter in your sweats for a protein-packed Moroccan chicken stew. Find it right next to a GoodLife on Yonge.

This one's a no-brainer since it's located directly inside Bolo, the cardio and boxing gym in the Entertainment District. You can grab one of their super healthy smoothies to go, or post up with a healthy meal—or a glass of prosecco, up to you.

Either location of this clean eats chain is a natural pit-stop for any spandex-clad customer. King West diners can head over directly after at class Barre3 or Old School Muay Thai. Those in Corktown can indulge in a power bowl after a sweat sesh at Lift Crossfit.

It's one of the most popular restaurants in the Fashion District, and for good reason: have you tried their quinoa onion rings? You'll order them because quinoa is high in protein, and of course, you'll need it after your daily workout at SPINCO. 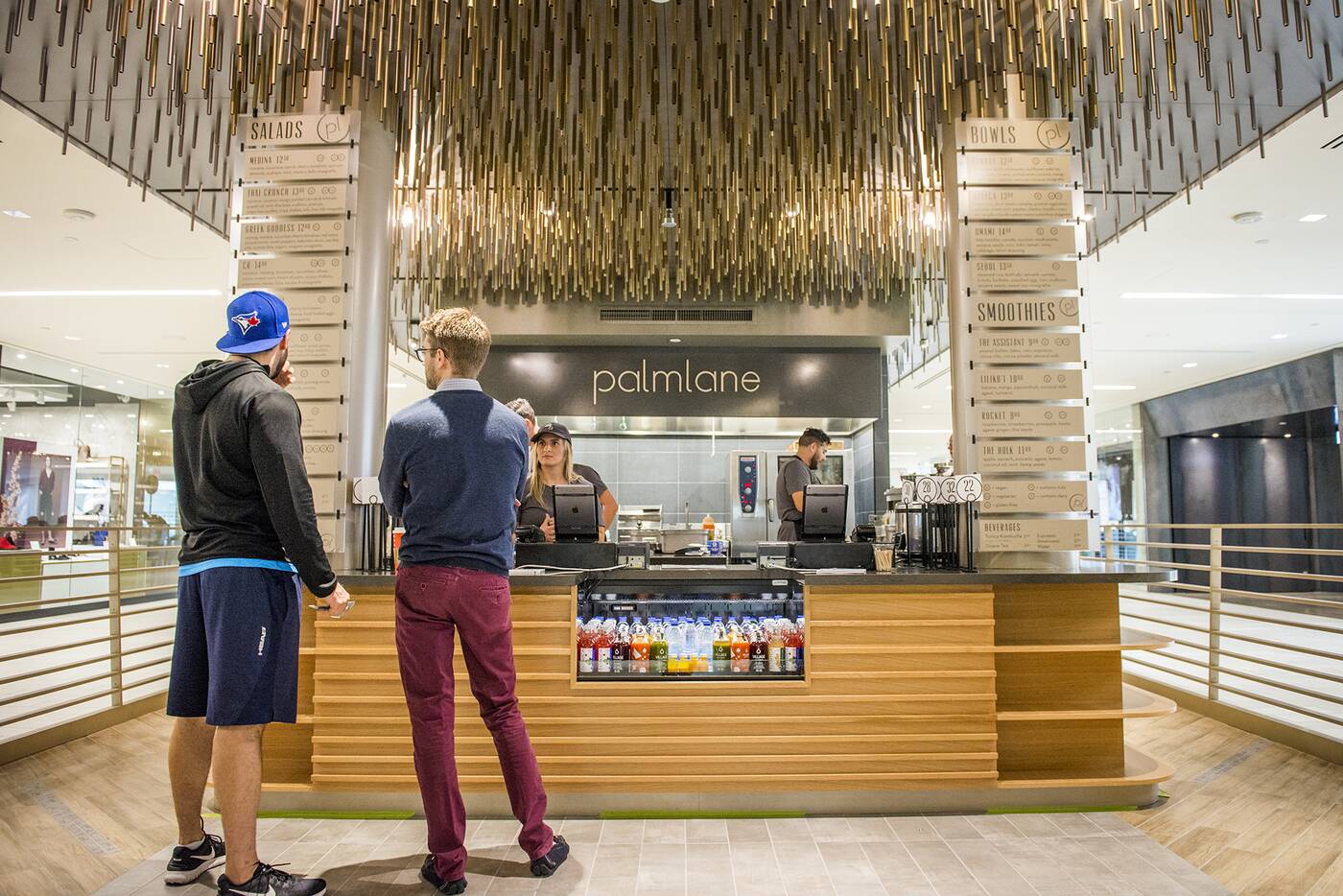 Palm Lane's menu is ideal for a meal post-work out at Equinox. Photo by Hector Vasquez.

There's a strong chance the servers at this Liberty Village restaurant will be decked out in some kind of sports jersey, in honour of the Toronto team du jour, so you'll barely stick out in the Sport Check Raptors hoodie you wear to bench press in.

Italian restaurants tend to lean more toward dress shirts-and-shoes affairs, but not so with this modern King West spot. Hop over from Studio KO in your best sweats and dig into some pomodoro-doused meatballs.

This quaint Little India cafe is the kind of place people gravitate to for sustenance in the midst of running errands, getting a workout in at GoodLife up the street, and picking up the kids. Save the nearby curry options for dinner and opt for a healthy sandwich instead.

It's chic, but this shakshouka spot on University definitely isn't snooty. Despite the restaurant being so pretty, you'll totally be able to pass with a hoodie after your spin class at Cardio Go. Just because you're still sweaty, doesn't mean you don't deserve a schnitzel.

Healthy juices, tahini bowls, gluten-free salads: they're all assembled with the active body in mind at this salad lover's paradise. Considering it's in Yorkville, you'd be surprised how many tights-wearing customers come through, probably from nearby Equinox.

Geary Ave. doesn't have too many dining options, so those that are there probably aren't too picky about what you're wearing. After a heavy lifting at Carpio Strength, an order of homemade truffle hummus and falafel probably looks pretty damn good. 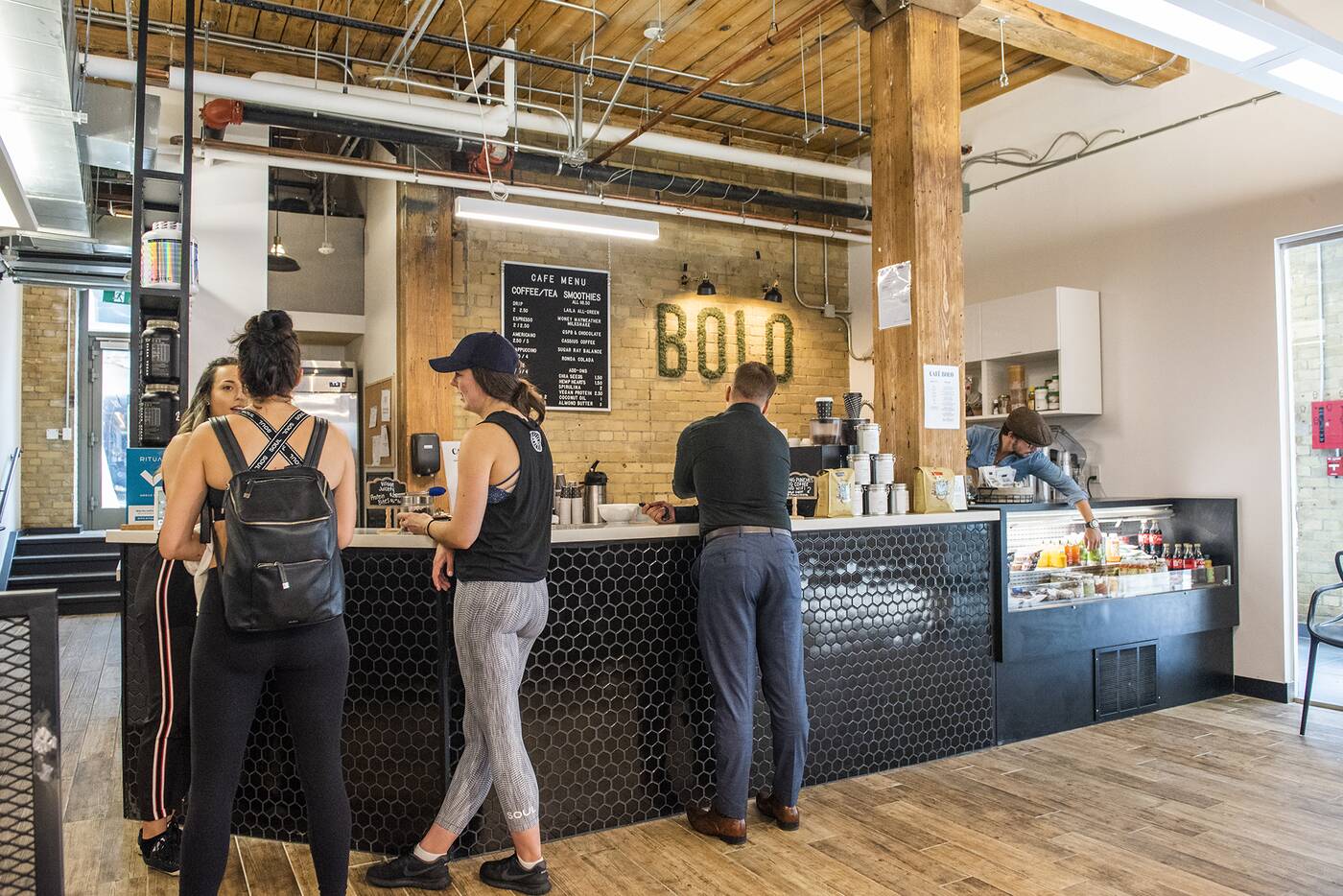 Boxing gym Bolo has its own cafe inside. Photo by Hector Vasquez.

So many options, so little time; you'll probably get a workout just running around between stalls figuring out what to eat. While the Urban Herbivore is definitely the healthiest choice, your workout at the Miles Nadal JCC might be deserving of a less healthy reward (a.k.a. PG Clucks).

Bring the whole squad to this bustling pizza hub on Adelaide West, where gym bros sit side-by-side with suits to indulge in personal-sized pies.

Quintessential campus Thai is the M.O. of this classic upper-level restaurant across from Ryerson. Students coming from exercising at the RAC or MAC love this spot—it's filling and cheap—but let's be real, university kids wear sweatpants even when they're not working out.

Maybe you're hopping over from the GoodLife in the Yonge Eglinton Centre, or maybe cozy life is the only way: the best way to celebrate whatever you're doing is stuffing yourself with multiple tacos.

Homey delicious food is always best enjoyed in home clothes, which makes a jaunt to this Little Italy dumpling house a natural fit. Classes at the nearby YMCA West End might be high-energy, but personally, nothing gets me more excited than wontons.