The top 35 late night eats in Toronto by neighbourhood

Late night eats in Toronto are almost as plentiful and diverse as our daytime dining scene. Burgers, burritos, dim sum and jerk chicken are just some of what you'll find at these after hours haunts.

Here are my picks for the top late night eats in Toronto by neighbourhood.

When it comes to late night eats, Bang Bang Burrito checks off all the boxes. It's greasy, cheap and the portions are massive. From poutine burritos to sweet churros, this spot does it all.

Fresh Montreal-style bagels and sandwiches are on offer at any hour of the day from 24-hour spot The Bagel House.

Vit Beo serves Vietnamese snacks such as congee, pho and banh xeo alongside craft beer until 3 a.m. on Friday and Saturday.

Tempura salt cod, eggplant kangpungi and pork belly steak ssam are just some of the tasty dishes you can eat at Seoul Shakers. Their kitchen is open until 2 a.m. Monday to Saturday.

Commisso Bros. has a well-stocked Italian hot table that serves up veal sandwiches and cannoli 24/7. 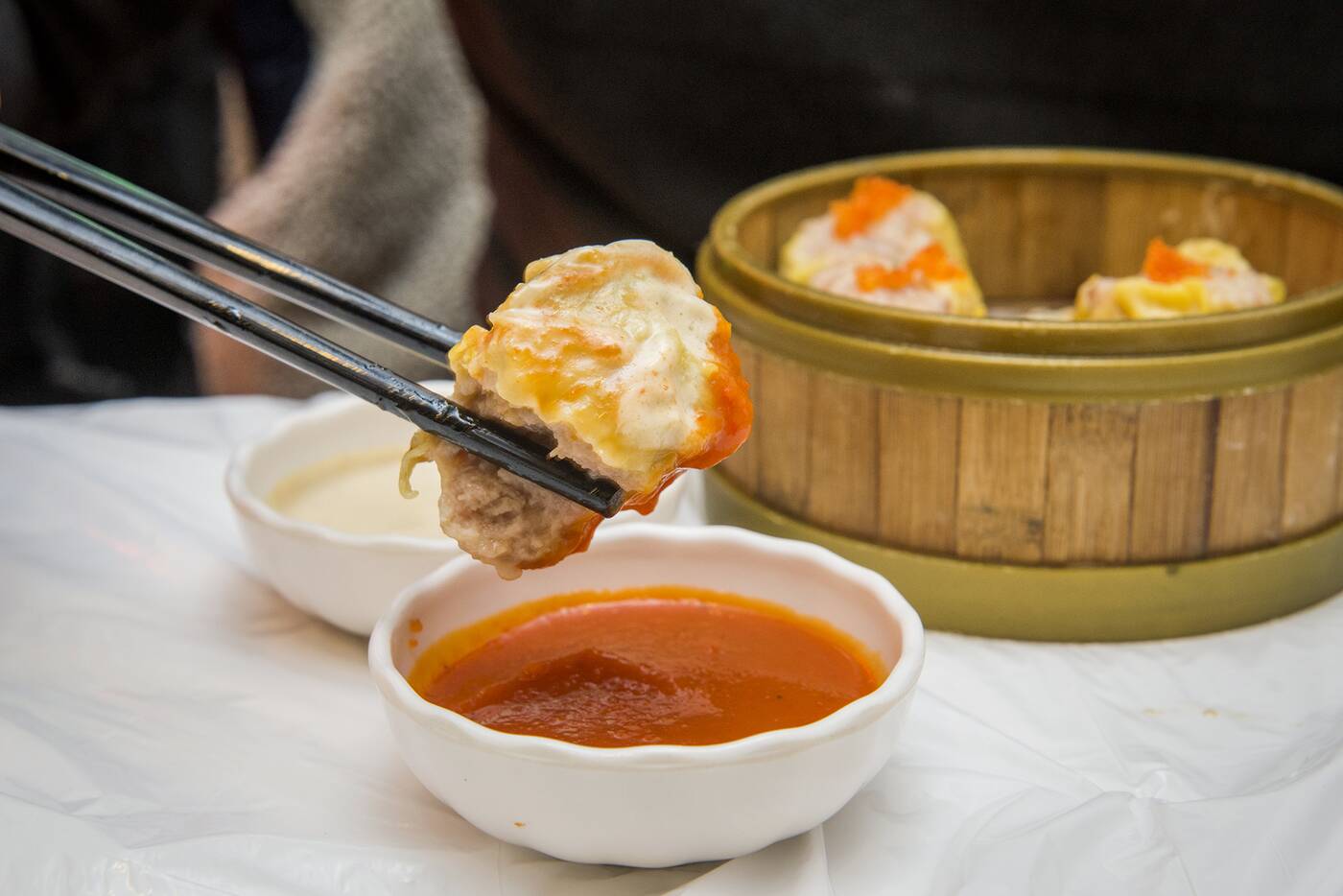 If you're craving dim sum well into the night, a visit to Rol San will hit the spot. Photo by Hector Vasquez.

There are plenty of late night options in Chinatown, but Rol San has always been my go-to, and I'm not alone. Find tables packed in the wee hours of the morning.

Adam's Shawarma in The Village is the go-to spot to fill up on pita wraps after the bars let out.

Roywoods is walking distance from Toronto's Entertainment District and is open well into the night to satisfy all your post-bar needs. Jerk chicken sandwiches and plates are offered until 4 a.m. on Friday and Saturdays.

One of Toronto's best souvlaki and gyro purveyors Alexandros Take-Out serves up their no frills Greek food until 5 a.m. on weekends and 4 a.m. on weeknights. 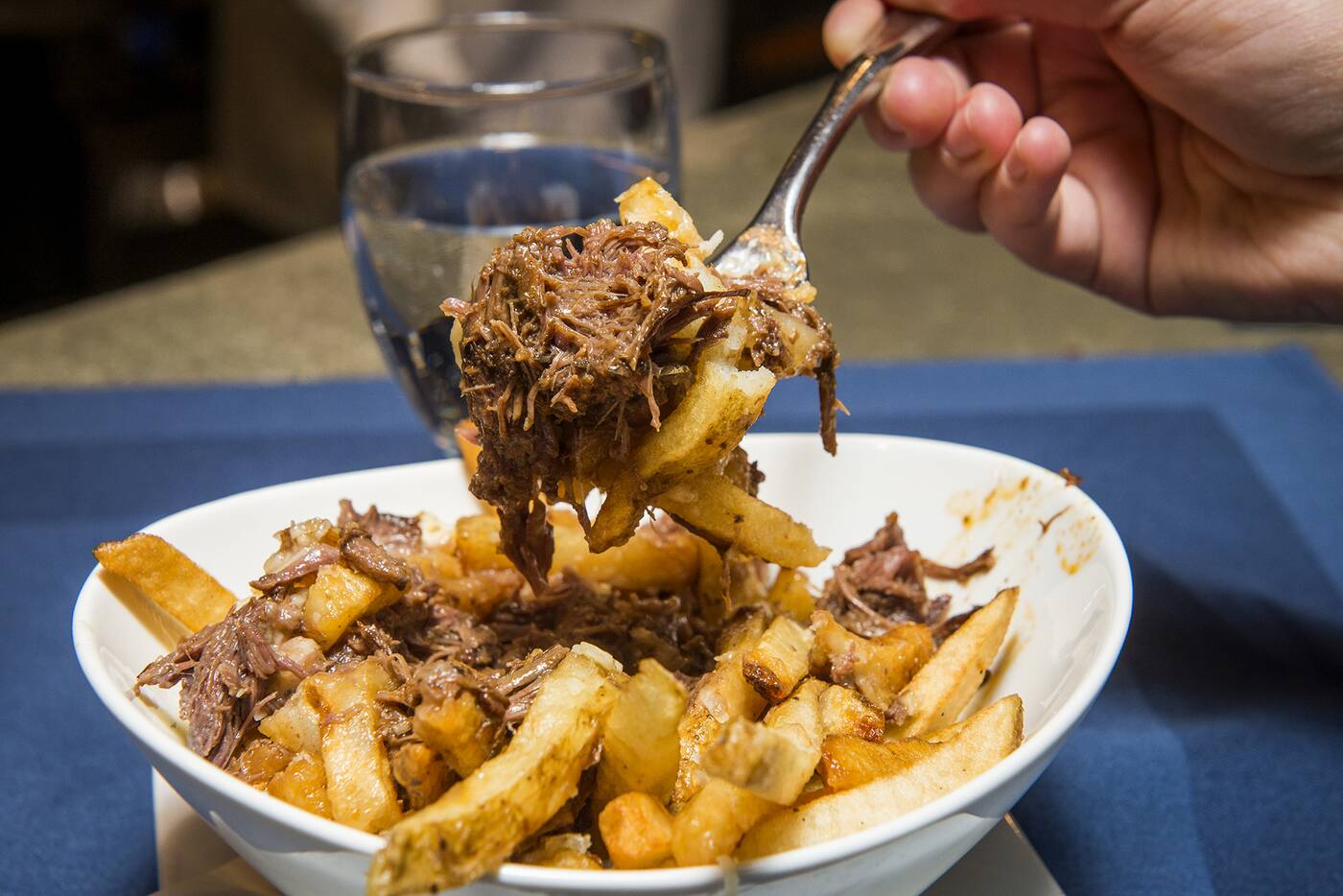 Beerbistro is taking classic poutine to the next level with the addition of beef cheek. Photo by Hector Vasquez.

The popular nightlife area is ground zero for late night eats with a number of joints all jostling for your business. My favourite in this 'hood has to be old reliable Lakeview Restaurant.

Illstyl3 Sammies serves sandwiches like po' boys, cheese steaks, and hoagies across from the Scotiabank Cinema well into the wee hours of the night.

Apache Burgers is one of the most iconic burger joints in Toronto, renowned over the years as a source for cheap, fast foods served well into the night.

If you find yourself hankering for late night poutine, look no further. Beerbistro is serving it late and topping it with gouda and beef cheek.

Pizza Gigi is home to some of Toronto's best late night pizza and a favourite among UofT students. 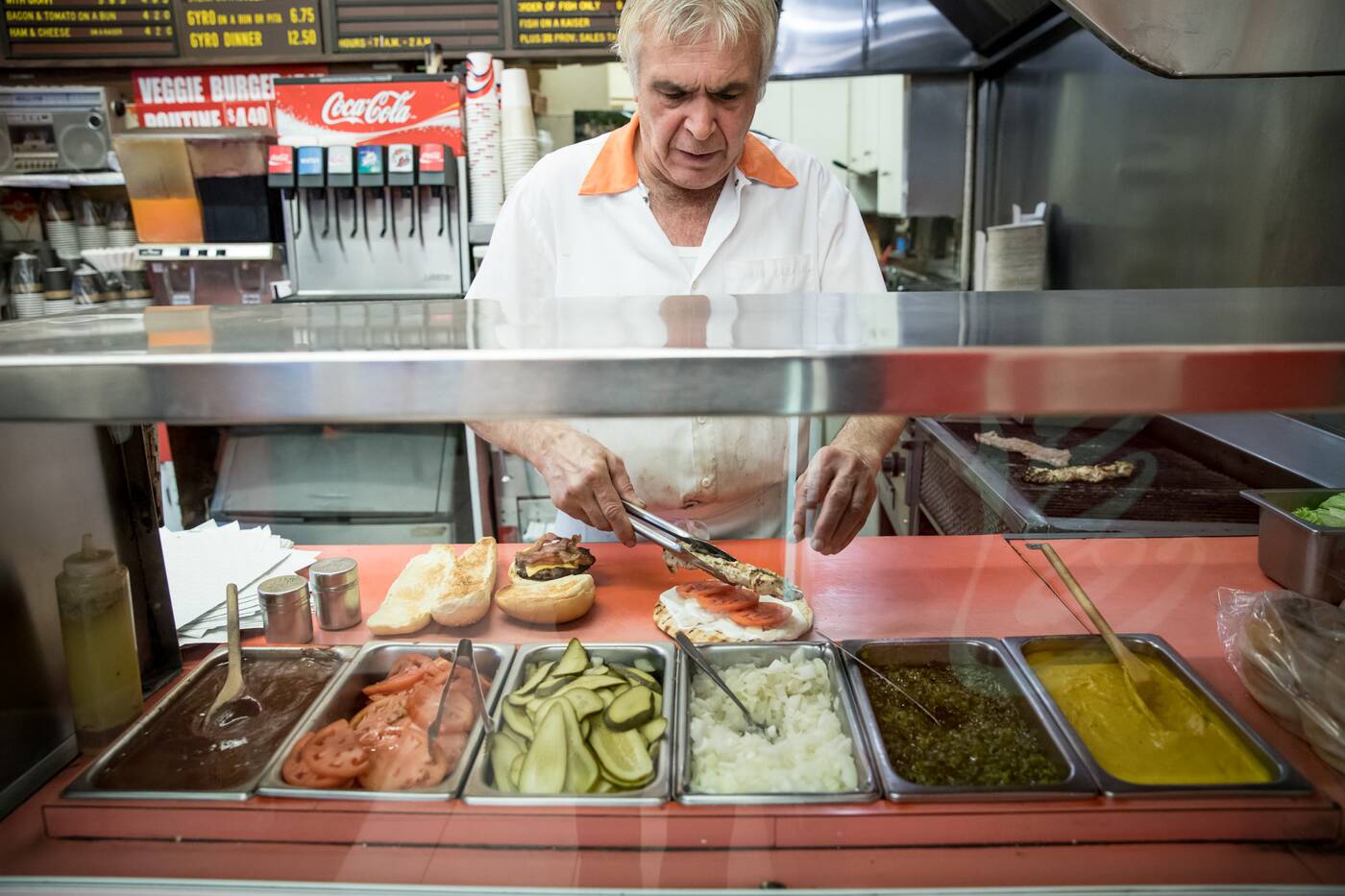 It doesn't get much more old school than Jumbo Burgers. Photo by Jesse Milns.

Open until 2 a.m. Monday to Saturday, Jumbo Burgers is a retro fast food joint where burgers, souvlaki dinners and fish and chips are all on the menu.

The Thompson Diner is open for business until 4 a.m. serving an elevated diner menu of all-day breakfast, burgers and hearty comfort foods.

The 24-hour The Owl on Bloor is a popular place for spicy rice cakes and pork bone soup, no matter what time of day.

By day, Leslieville Pumps makes not-so-traditional Southern BBQ sandwiches and poutine, but at night it offers up Sri Lankan curry, which seems to be popular at 3 a.m.

Sneaky Dee's is famous for their nachos, which always make for a reliable and sharable snack after a few drinks. 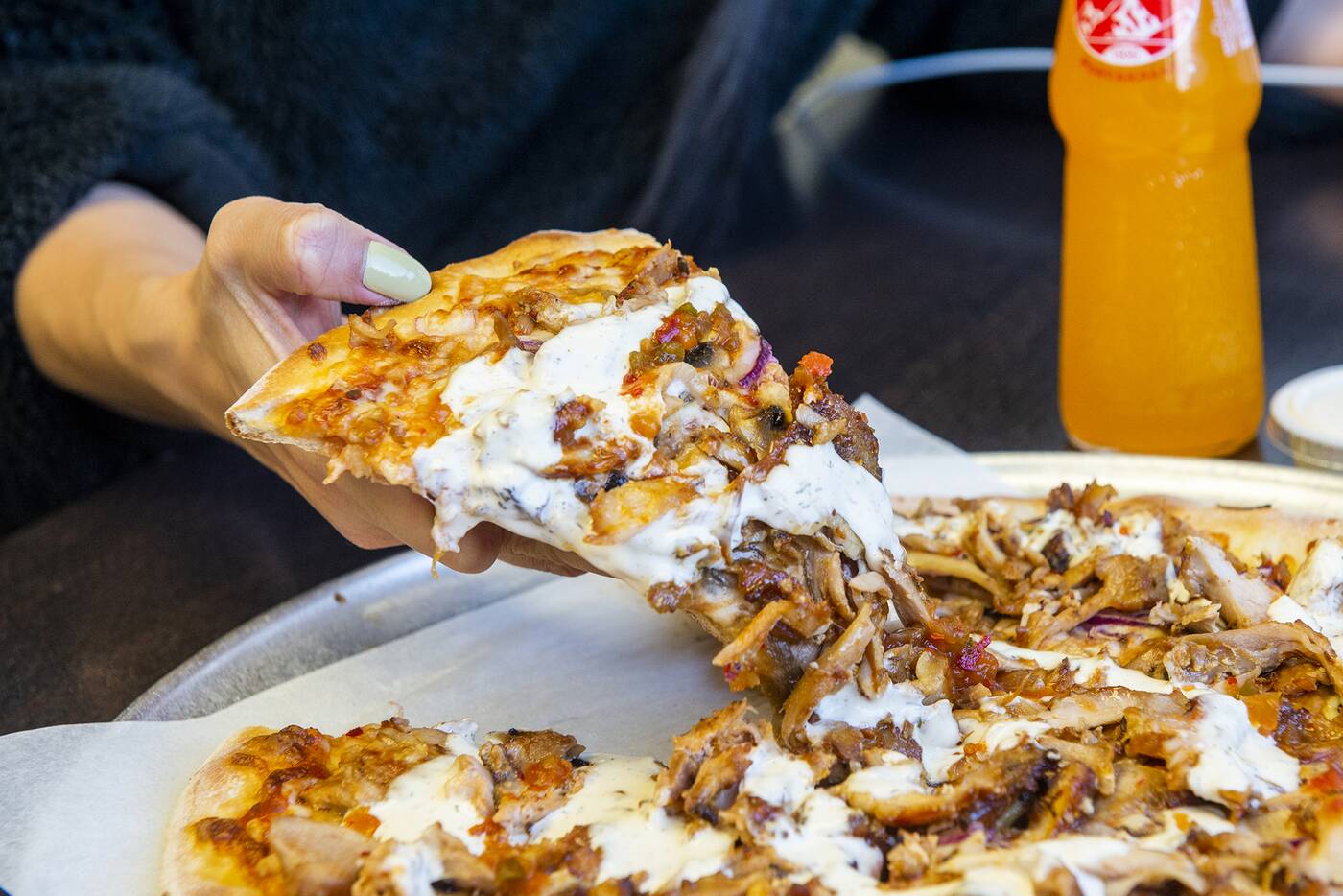 Satisfy cravings for shawarma and pizza all at once at Chito's Pizza. Photo by Hector Vasquez.

Late night eats don't get much better than shawarma pizza. Chito's Pizza is serving it until 2 a.m. on weekends.

Open until last call every day of the week except Sunday, Oddseoul by brother duo Leeto and Leemo Han serves up Korean snacks with a North American twist.

Across the street from Pape Station, Souv Like wins over late night diners with souvlaki dinners and gyros until 4 a.m. on weekends and 1 a.m. the rest of the week.

Amico's Pizza is a staple in the neighbourhood for pastas, pizza, and other Italian dishes served late into the night, as well as just grabbing a drink at the bar.

Located near Queen and Bathurst, Pat's Homestyle is your source for tasty jerk chicken after a wild night out. 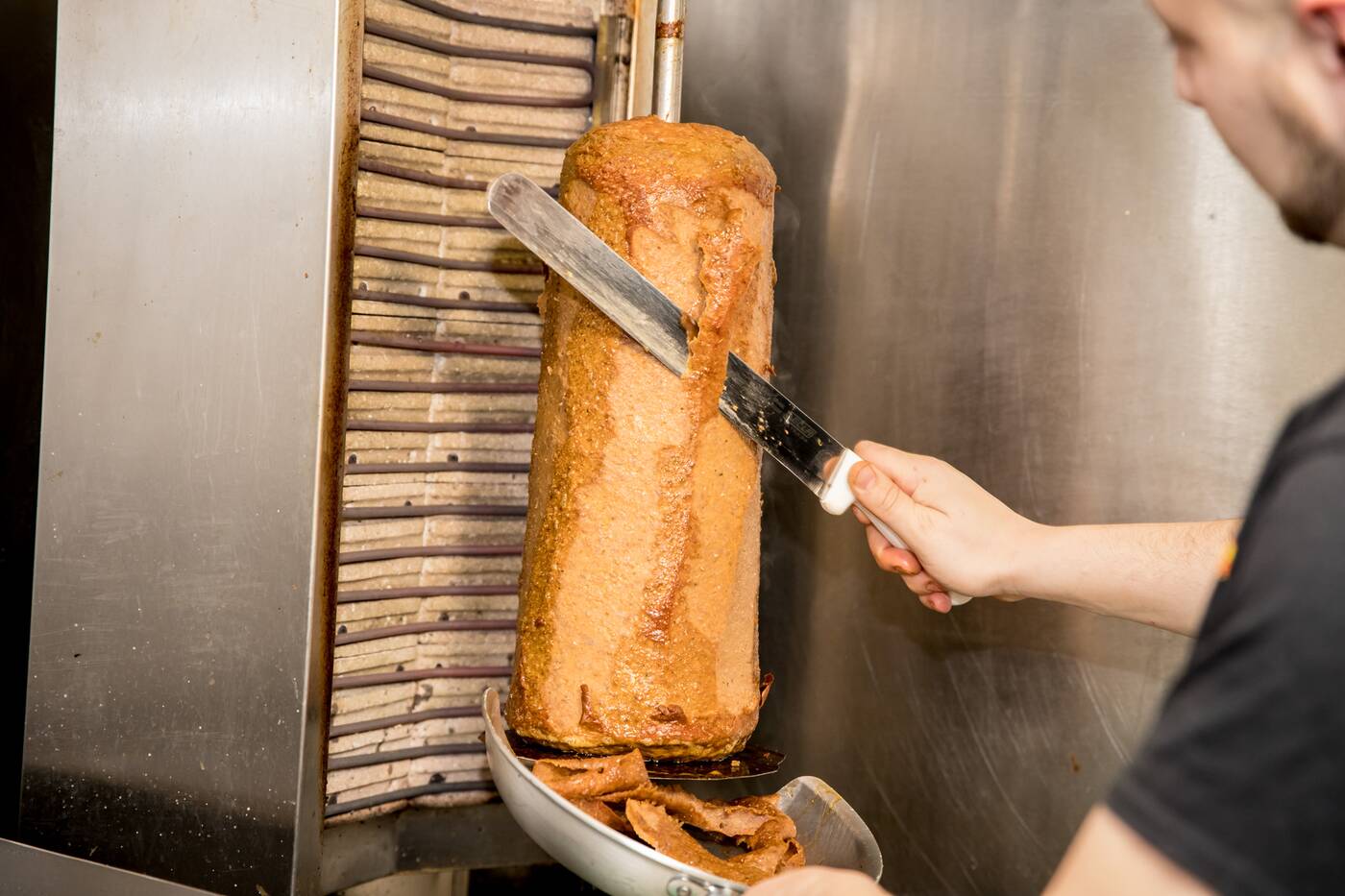 It's all about the donair at Jessy's Pizza. Photo by Jesse Milns.

Small Nova-Scotia-based pizza chain Jessy's Pizza is one of the only places to eat donair pizza and egg rolls in Toronto. They're also open on weekend until 2 a.m.

Perfect Chinese Restaurant is a 24-hour source for dim sum that's still popular after all these years.

Find Jerk chicken dinners and roti at Albert's Real Jamaican until 2:30 a.m. on Fridays and Saturdays.

Open until 3:30 a.m on weekends, Poutini's House of Poutine caters to a drunken clientele with a menu of fries, cheese curds and gravy.

7 West is open around the clock for breakfast, pita pizzas, sandwiches, pasta and slices of cake. 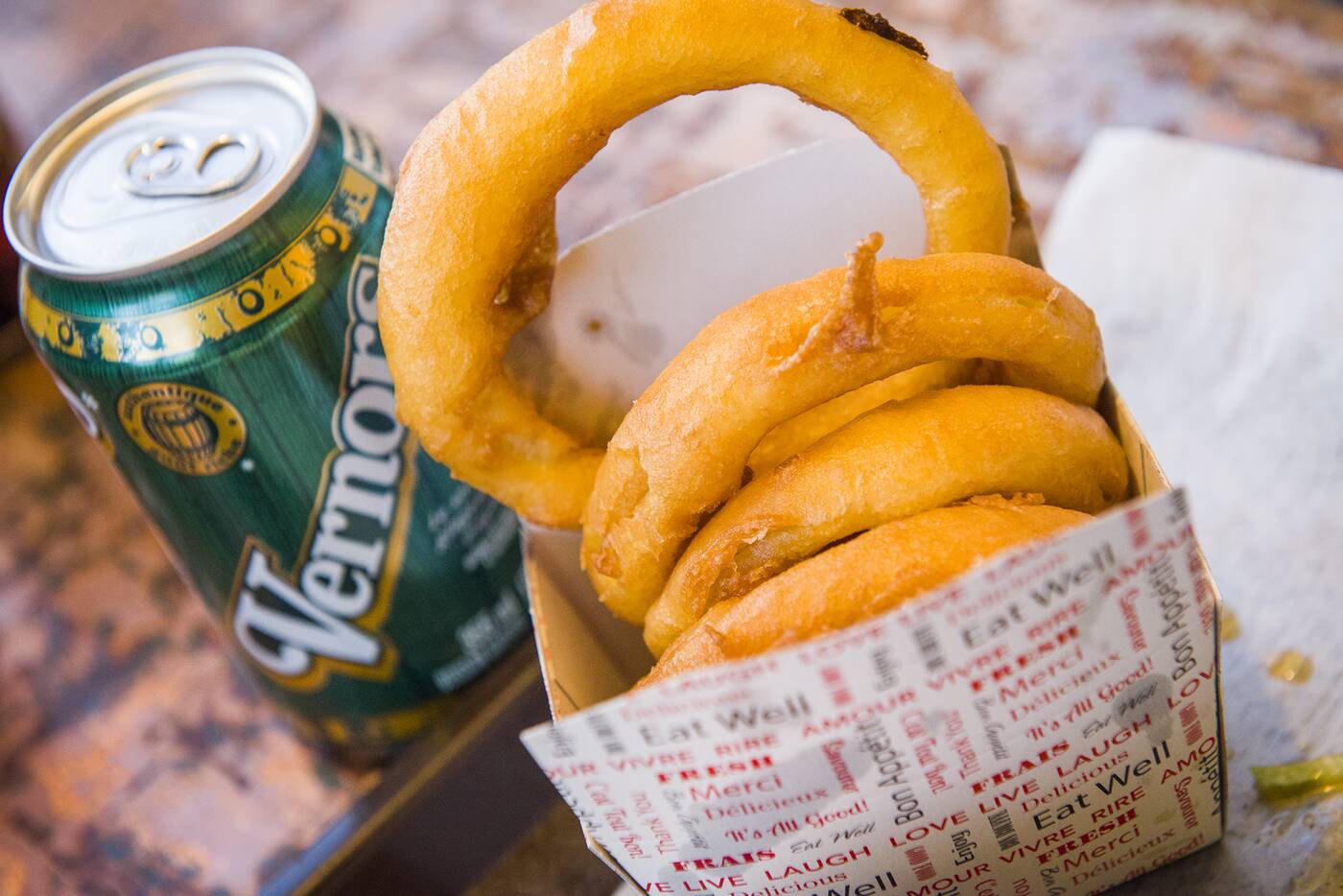 Burger Shack is home to some of best onion rings in Toronto. Photo by Hector Vasquez.

When hunger strikes in the middle of the night—or after the bar—Fran's is always ready to serve. They're open 24 hours, after all.

Burger Shack has been serving late-night old school burgers since the 80s. Don't skimp on the onion rings, either.

Belly Buster's turkey bacon sub really shines after last call and a few too many drinks. It's open until 2:30 am or later, Monday through Saturday.

Hemingway's keep their kitchen open until 2 a.m. every night of the week. Get selections off their late night menu like burgers, pizza and nachos.