Leslieville Pumps is the poutine-slinging BBQ spot and general store named after the 24/7 gas station it once operated.

They’re no longer selling gas — the Flom brothers have left the service gas lines behind and moved three doors down — but the name and spirit of the Pumps remain the same. 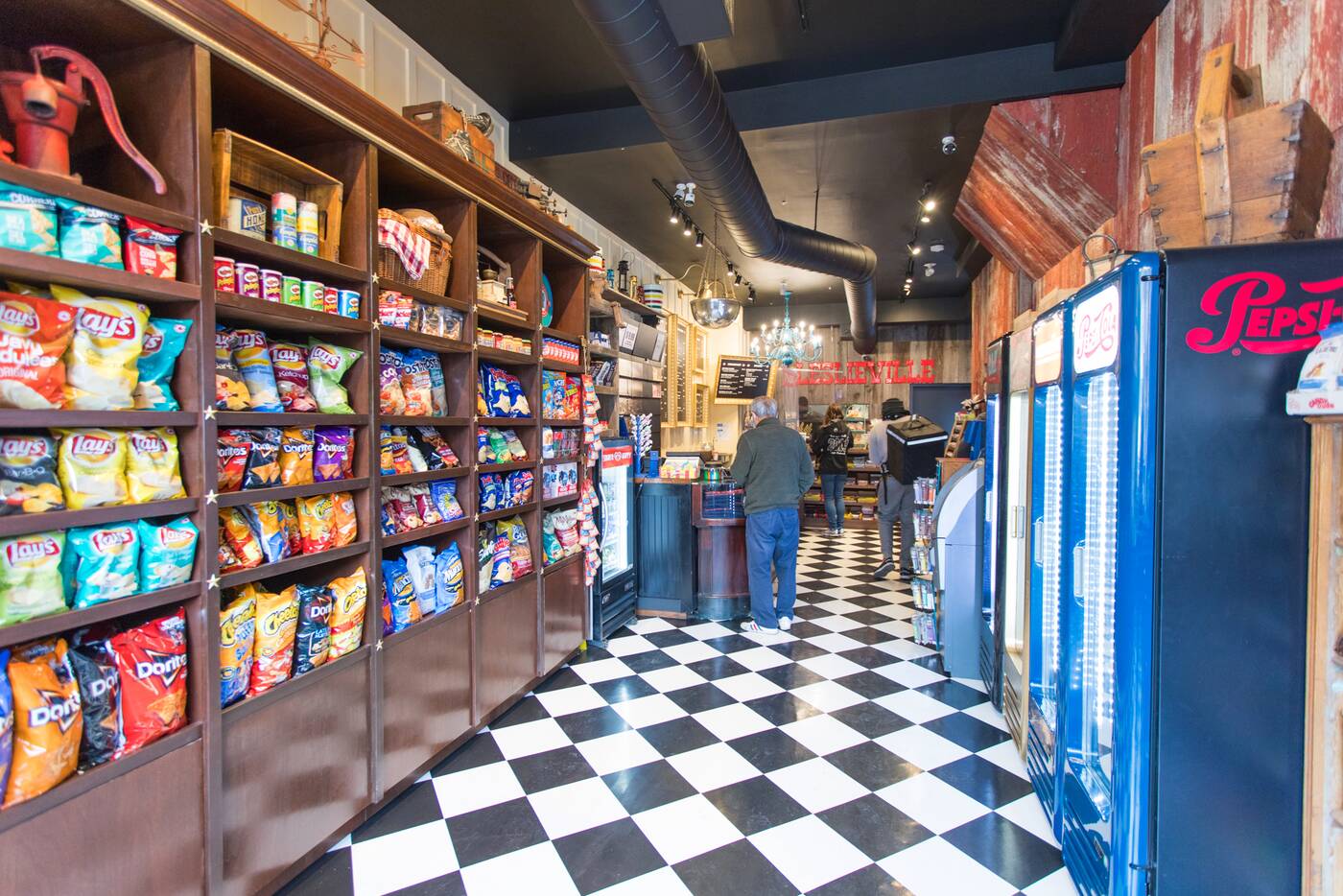 It’s been nearly a decade since Greg and Judson Flom since took over an old Country Style on Queen Street East, simultaneously inheriting the 53-year-old gas station attached to it.

With a 10-year lease almost up, the brothers said they wanted to simplify. In other words, it was time to ditch the pumps. 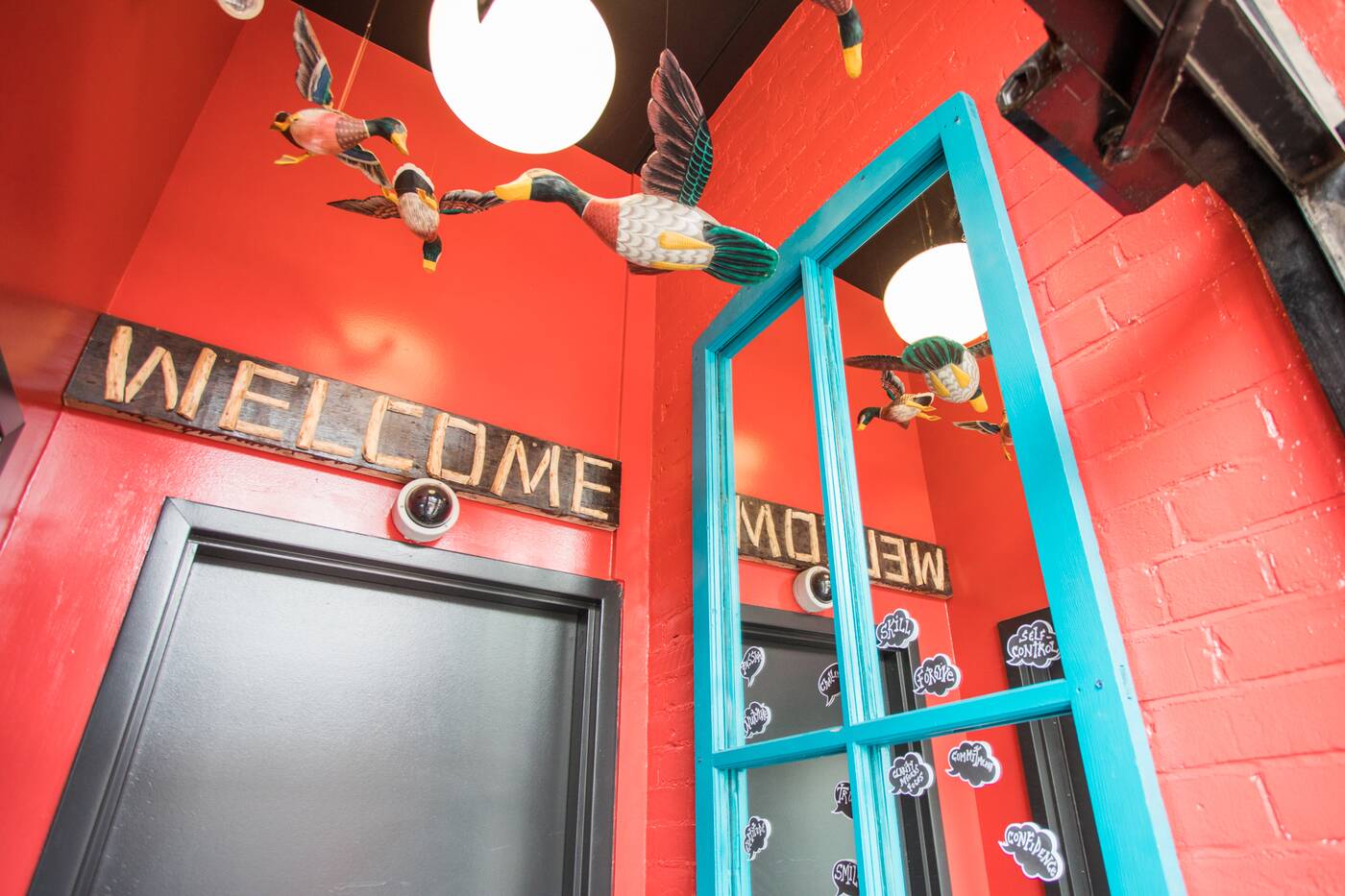 It still carries that same rustic cottage country vibes and truck stop-inspired goods, but slightly more retro thanks to the checkered floors.

The brothers grew up going to their cottage in Kawartha Lakes, and the wooden ducks suspended from the ceiling say it all. 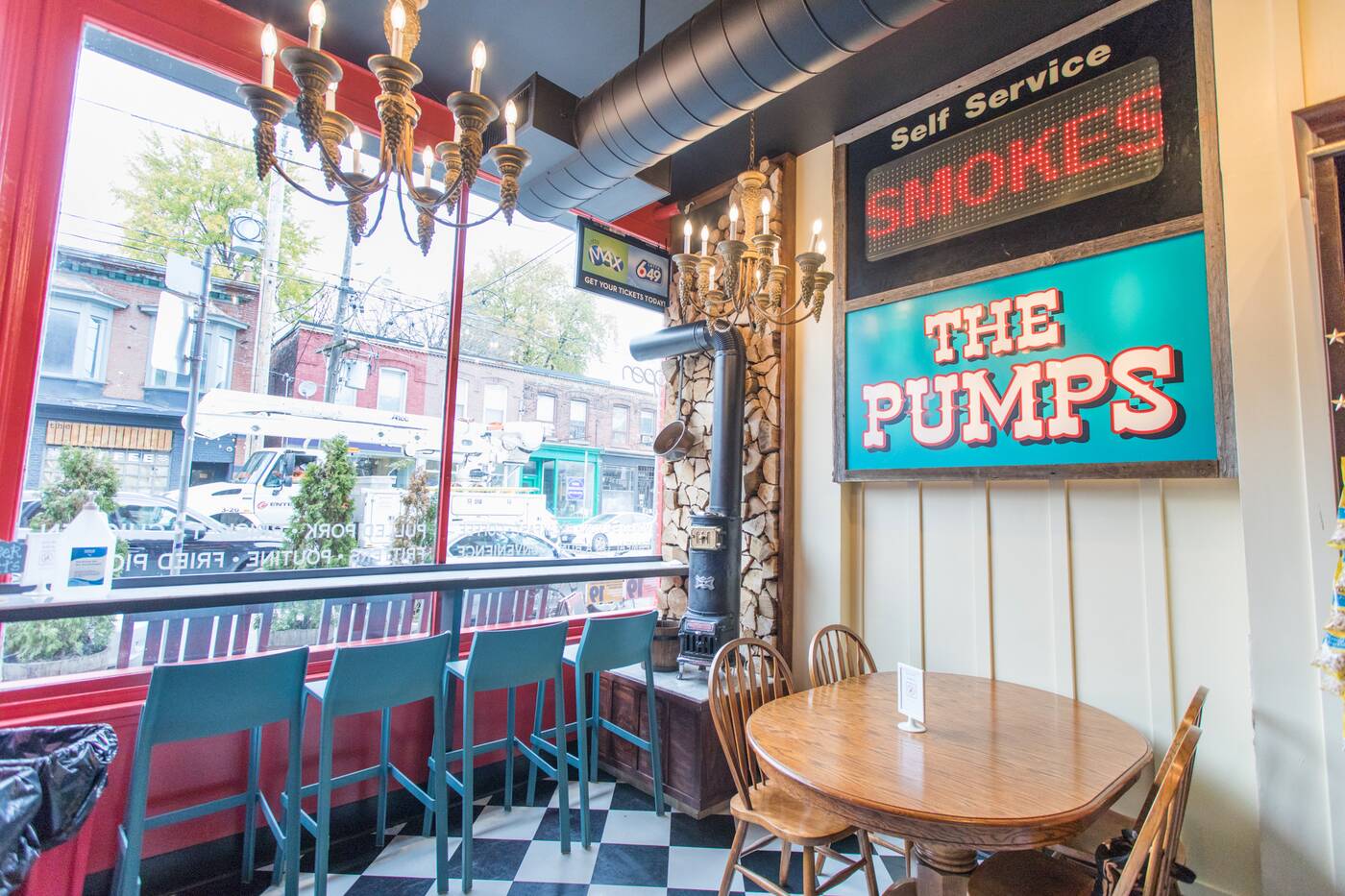 There are some nice details here, like a salvaged display counter from manufacturer Kent McClain Limited, which used to sit on Carlaw Avenue, or 110-year-old reclaimed wood from Strathroy lining the walls.

The old gas station sign sits on the wall, but now displays menu items instead of fuel prices. 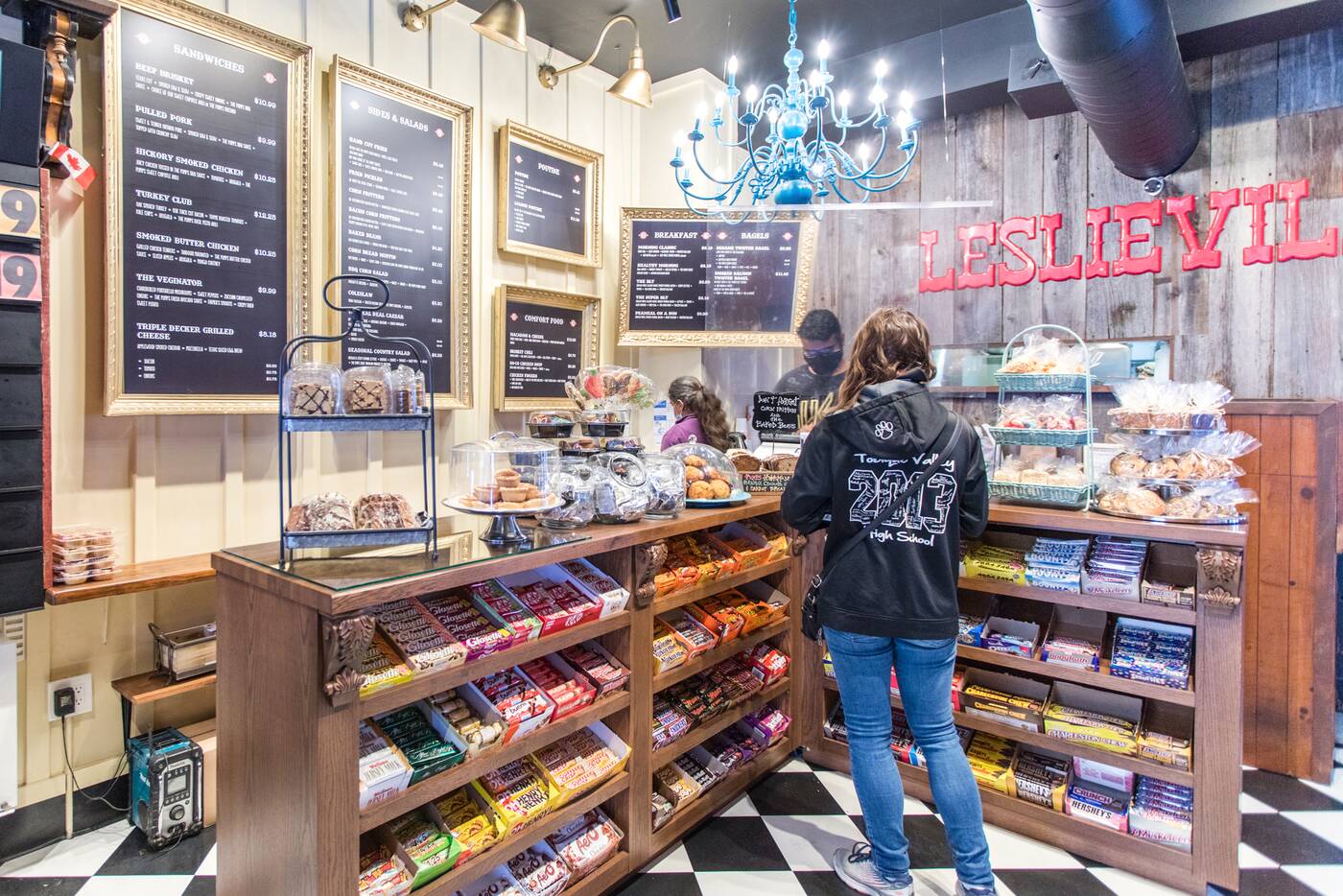 There’s an equal number of people stopping in to buy Lotto Max tickets or snacks as there are for the Pumps’ main menu. 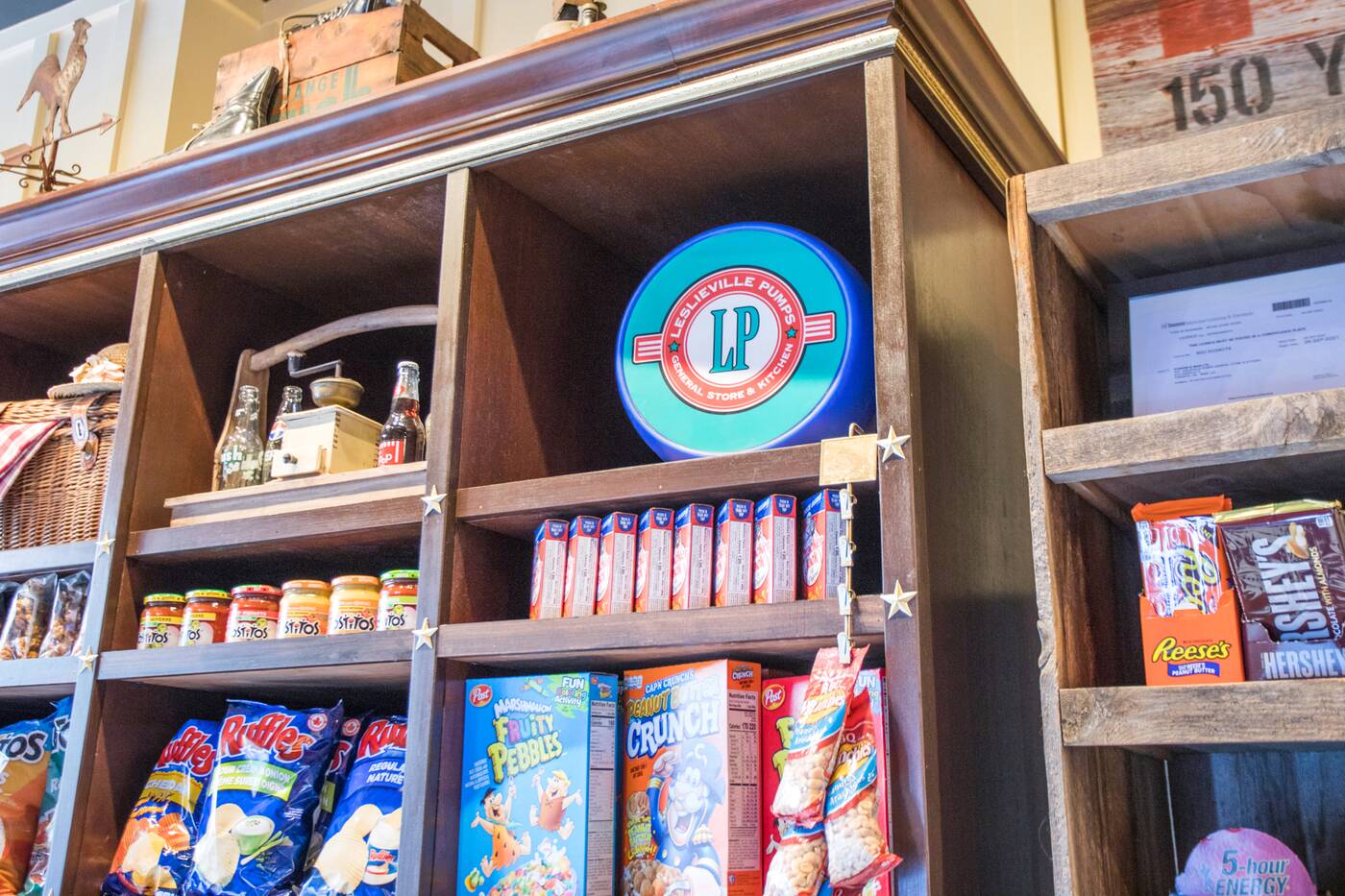 The walls are covered in chips and candy. Fridges are stocked up with your essential sodas plus nostalgically niche drinks like Shirley Temples and Tahitian Treat Fruit Punch. 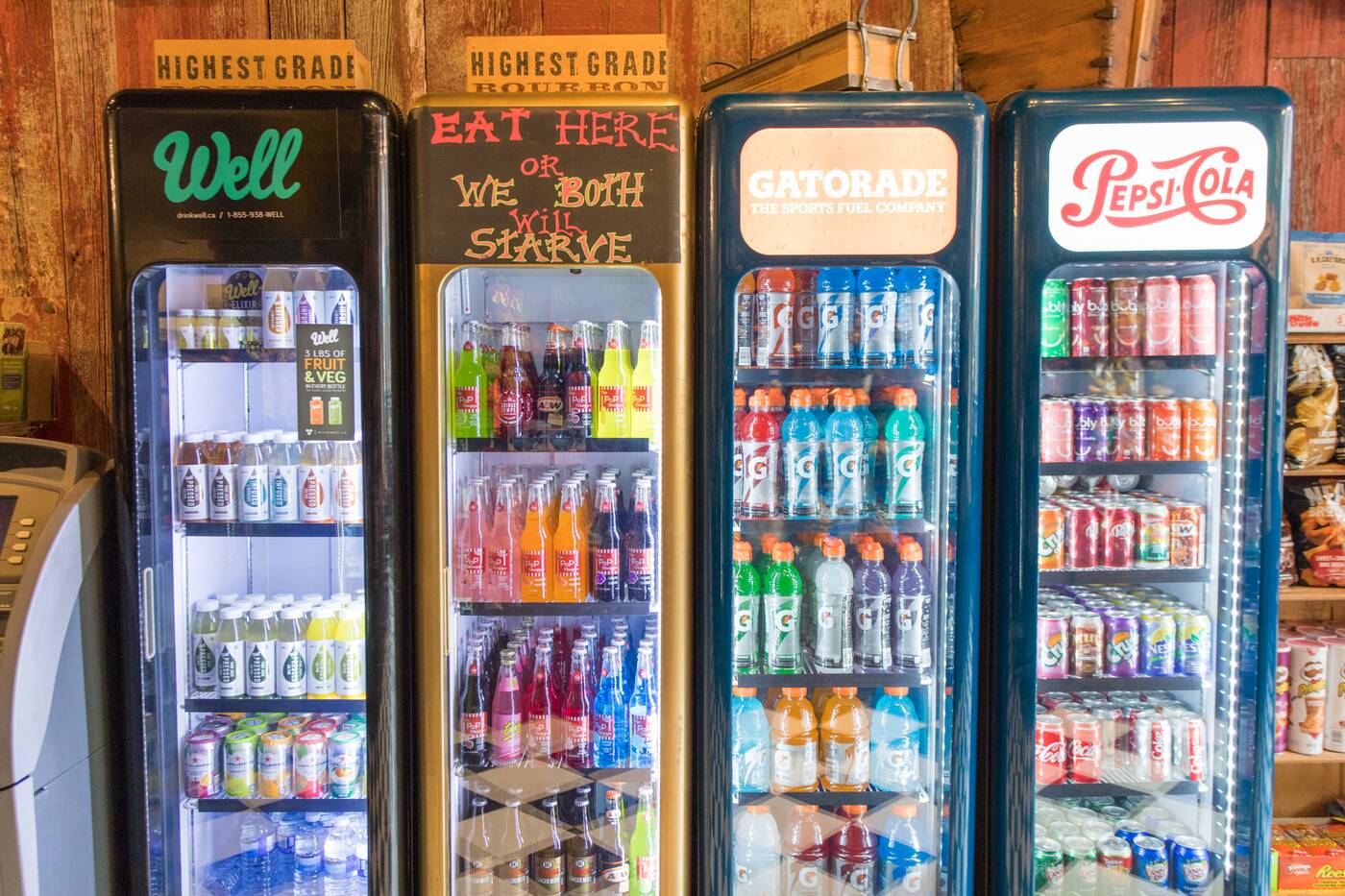 It feels very much like a regular 24-hour convenience store, except for the tantalizing aroma of slow-smoked meat wafting from the kitchen.

Jud, who’s past cooking experience includes Pusateri’s and O&B, says that they smoke about 150 to 200 pounds of meat nightly. 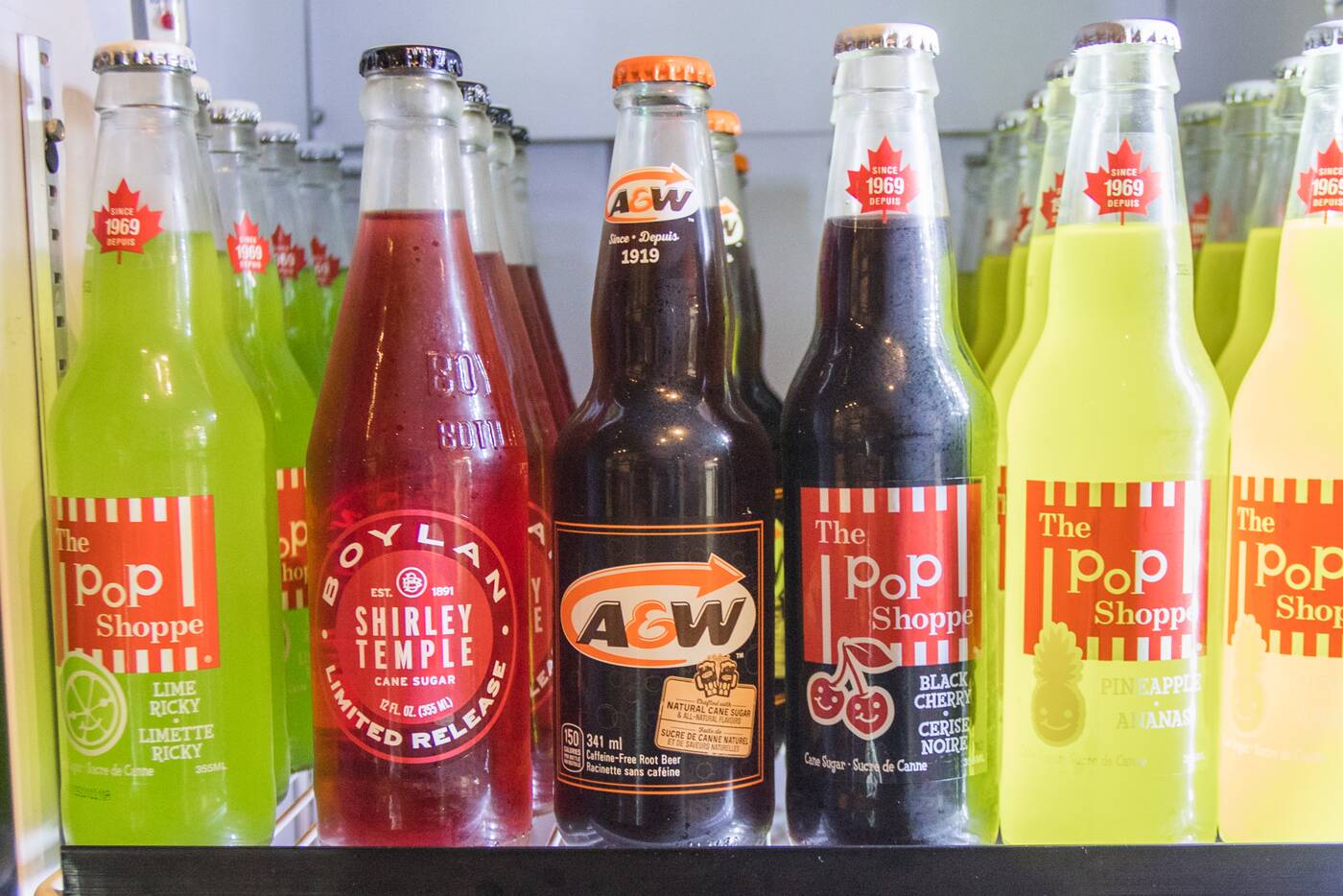 While there’s been a few additions to the menu, like a new maple syrup-basted peameal sandwich that’s sure to catch the attention of bacon fans, the menu and all its favourites remain largely the same. 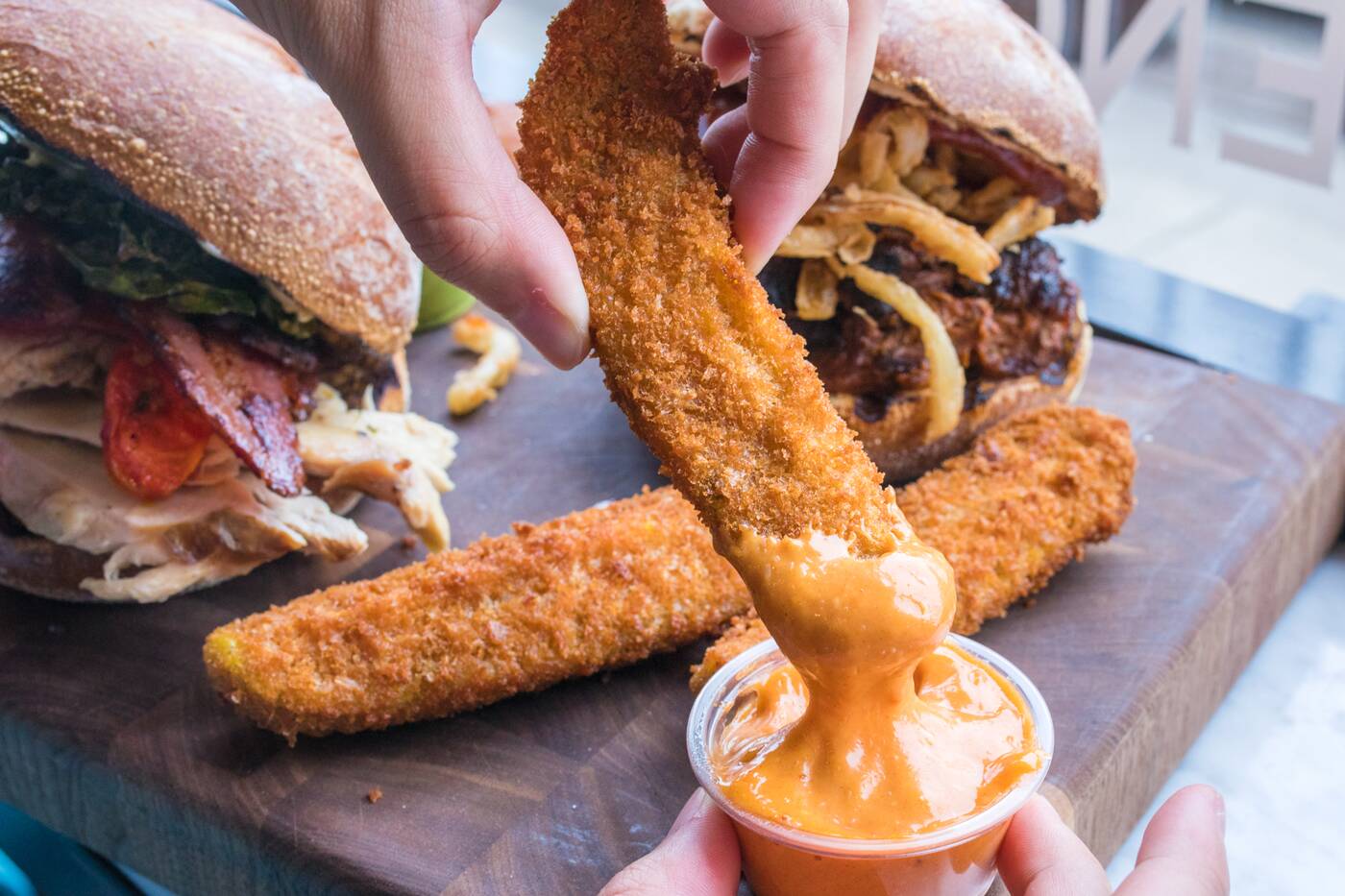 No visit to the Pumps is complete with an order of fried pickles.

Battered in a thin layer of panko, an order of four pieces ($5.49) comes with a sweet chipotle aioli. It’s crispy, juicy, and very popular craving amongst pregnant women, I’m told. 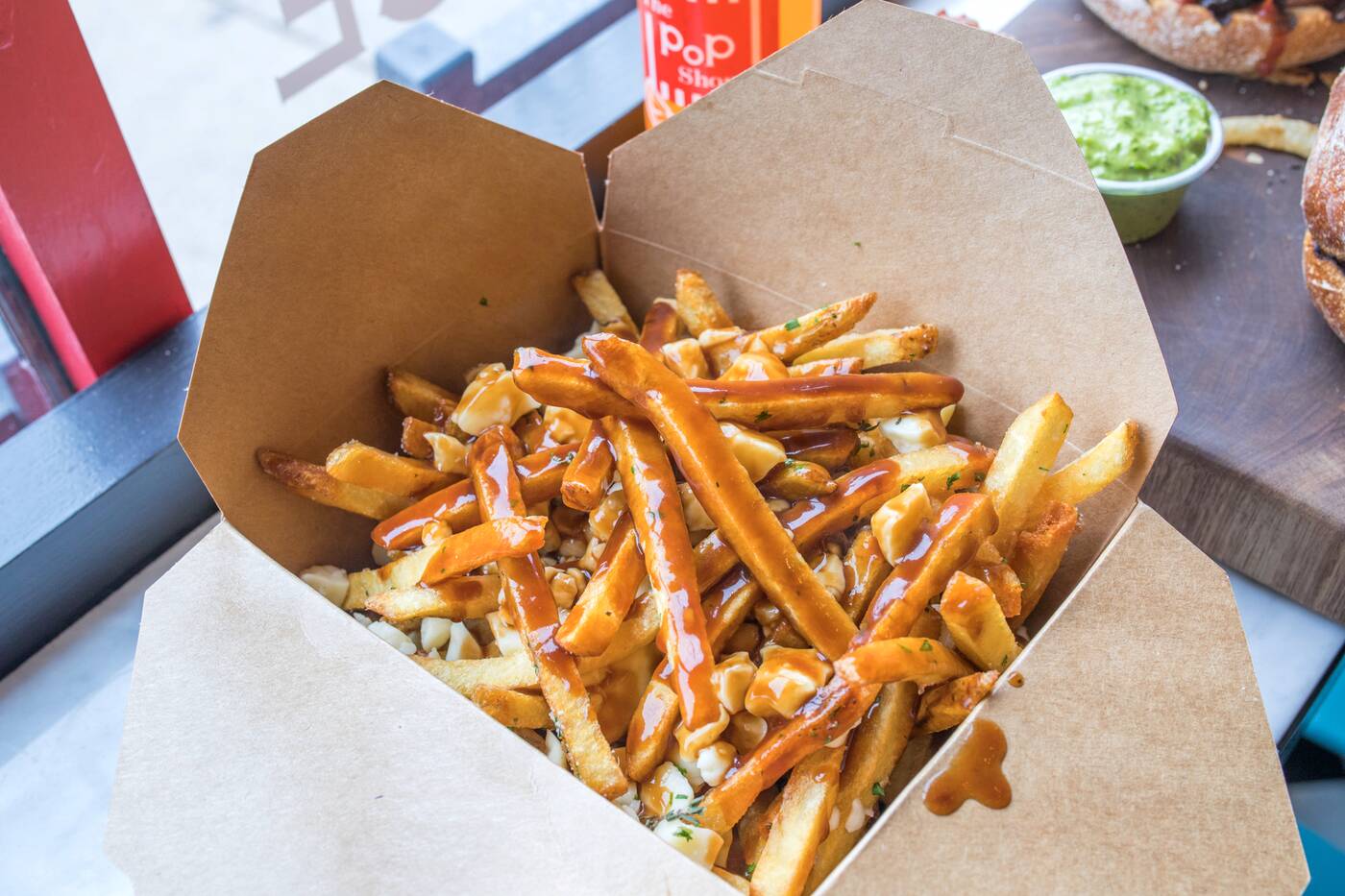 Poutine is another claim to fame. Super crispy fries are covered in a dark gravy using jus from the smoker, thickened, and atop Ontario cheese curds. It’s $6.41 for a classic, or $11.99 with your choice of meat like pulled pork, beef brisket or baked beans. 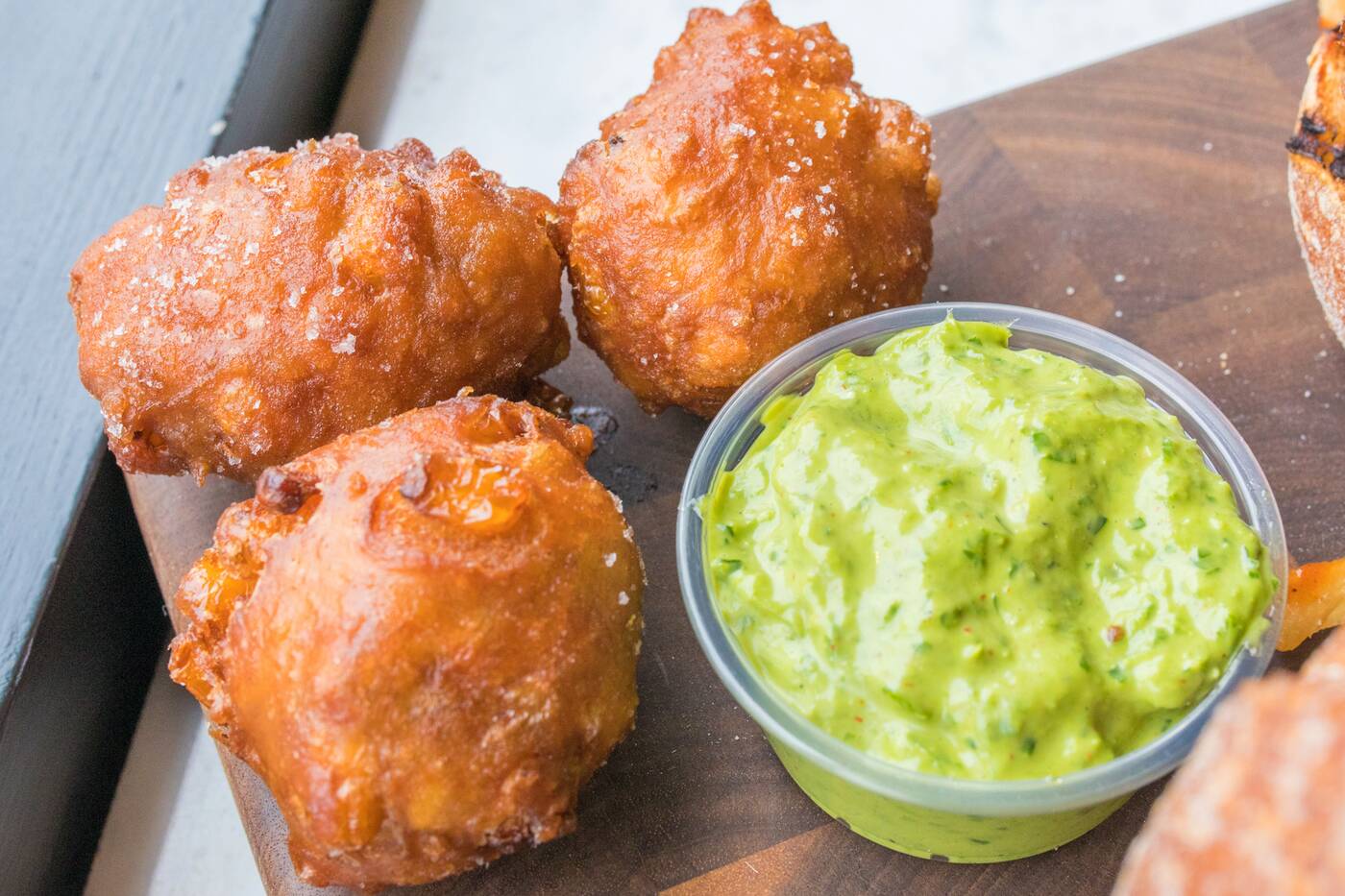 I could eat the bacon corn fritters forever. Playing on southern hush puppies, plus the apple fritters that Jud’s grandma made, an order of five is $6.

The flavour only gets better with a super herby, garlicky take on Creole sauce, minus the tomato. 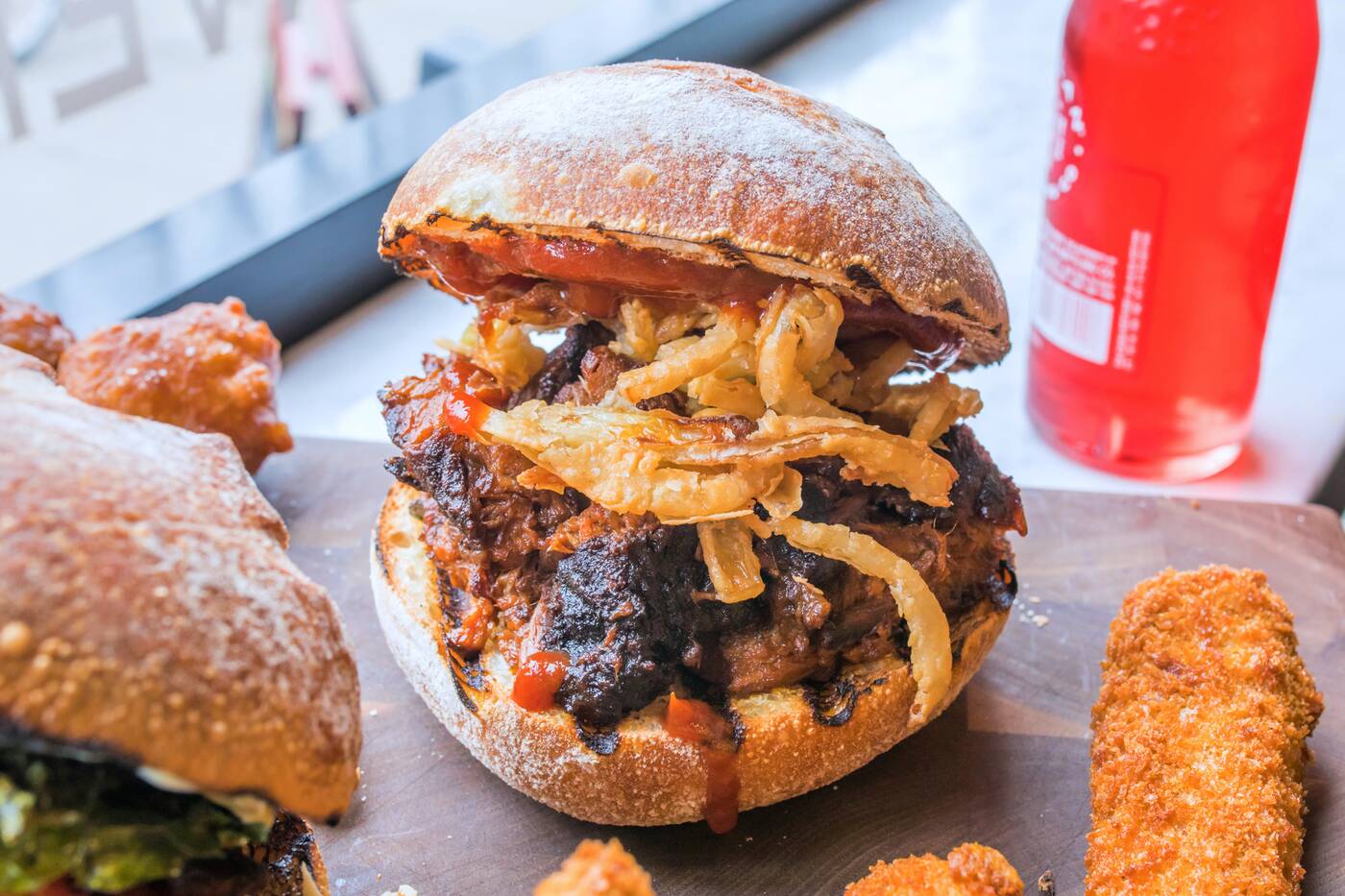 A slow-cooked beef brisket sandwich ($10.99) is a good showcase of the BBQ here. The meat comes on custom baguette-like buns from Ace Bakery, with crispy onions and a homemade BBQ sauce with a secret ingredient: whiskey. 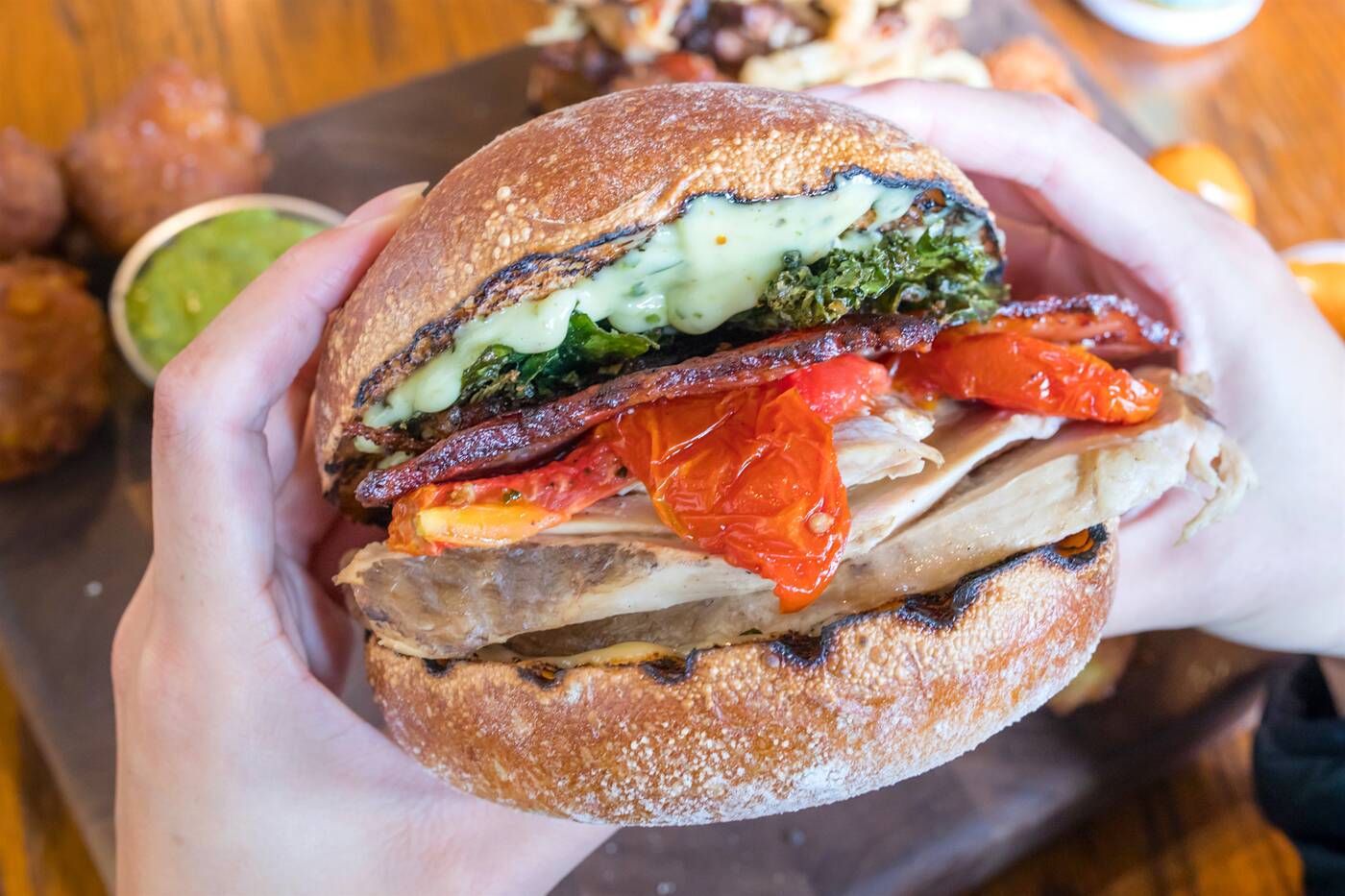 A single-decker turkey club sandwich ($12.25) has pesto aioli, thyme-roasted tomatoes, and kale chips. The bacon slices inside are cured for 28 days in-house before being smoked and sliced. 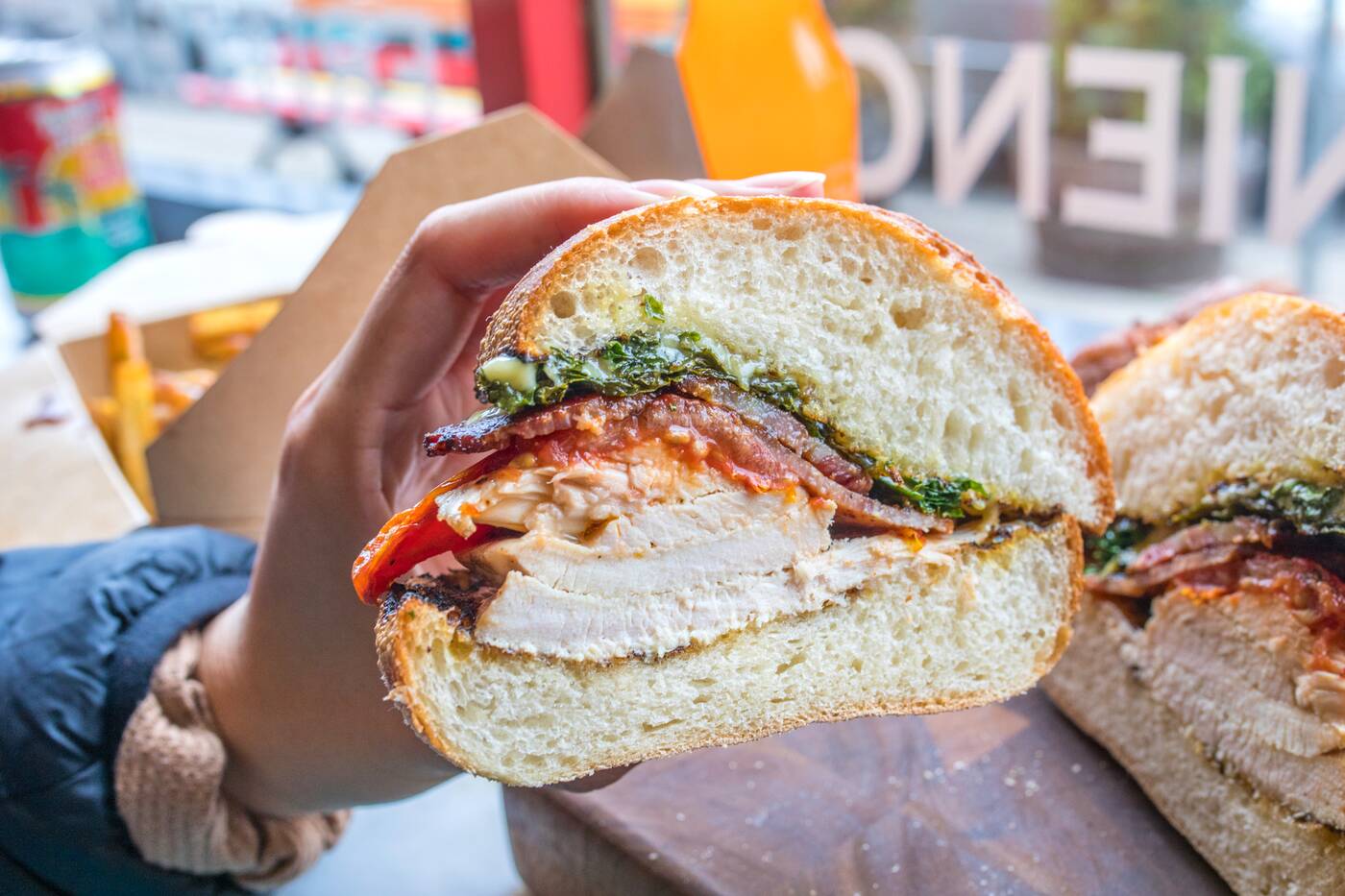 The turkey breast is smoked for four to six hours with a mix of cherry and hickory wood for a sandwich with big flavour.

Beyond prices being reasonable, The Leslieville Pumps really feels like a one-stop shop. You might come for a bag of chips and a lottery ticket but accidentally leave with an order fries and a burger loaded with slow-smoked brisket. 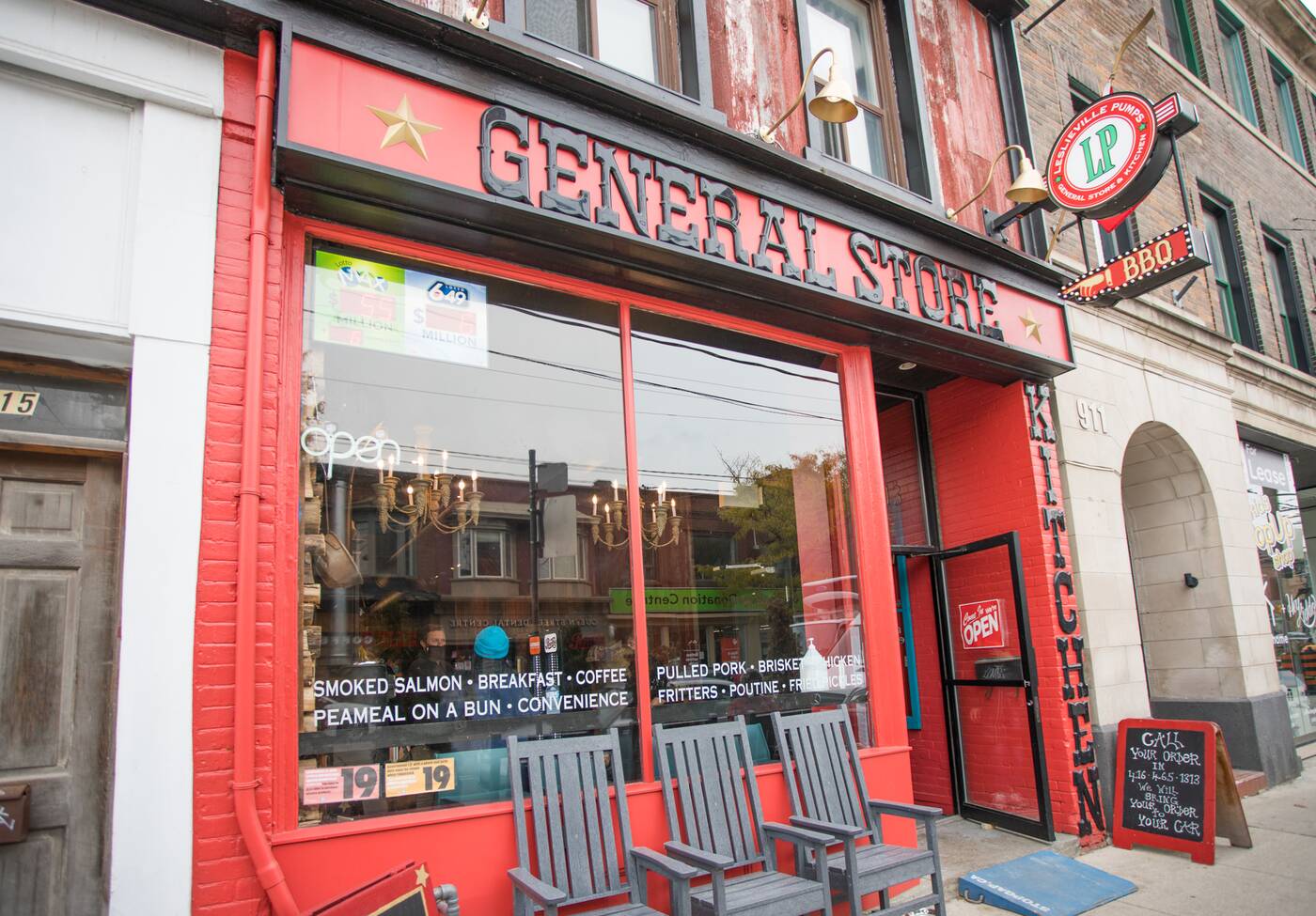