Ah, Toronto: completely unaffordable to live in, on the verge of a massive housing bubble and struggling to recover from some of the world's longest pandemic lockdowns — but, we still have much to celebrate.t

Yes, we may be the largest city in a nation that has become one of the most miserable over the course of the pandemic, but we have also recently been named one of the smartest hubs in the world.

True, our real estate market may be absolute nonsensical madness, but we are also one of the safest and most tranquil metropolises to live in with some of the best sports fans on the globe, to boot.

And now, we have yet another honour to add to the list: Bloomberg Businessweek has named Toronto the top business city on the planet for working women.

A new analysis by the media brand examined the quality of life for career women in carefully selected hubs of commerce worldwide, examining factors like overall safety, mobility, equality, wealth and earning potential and maternity supports.

Publicly available data and the firsthand experiences of hundreds of women working in each city were used to create the international ranking, in which Toronto came out on top, beating out renowned locales like Sydney, Singapore, Paris and London. 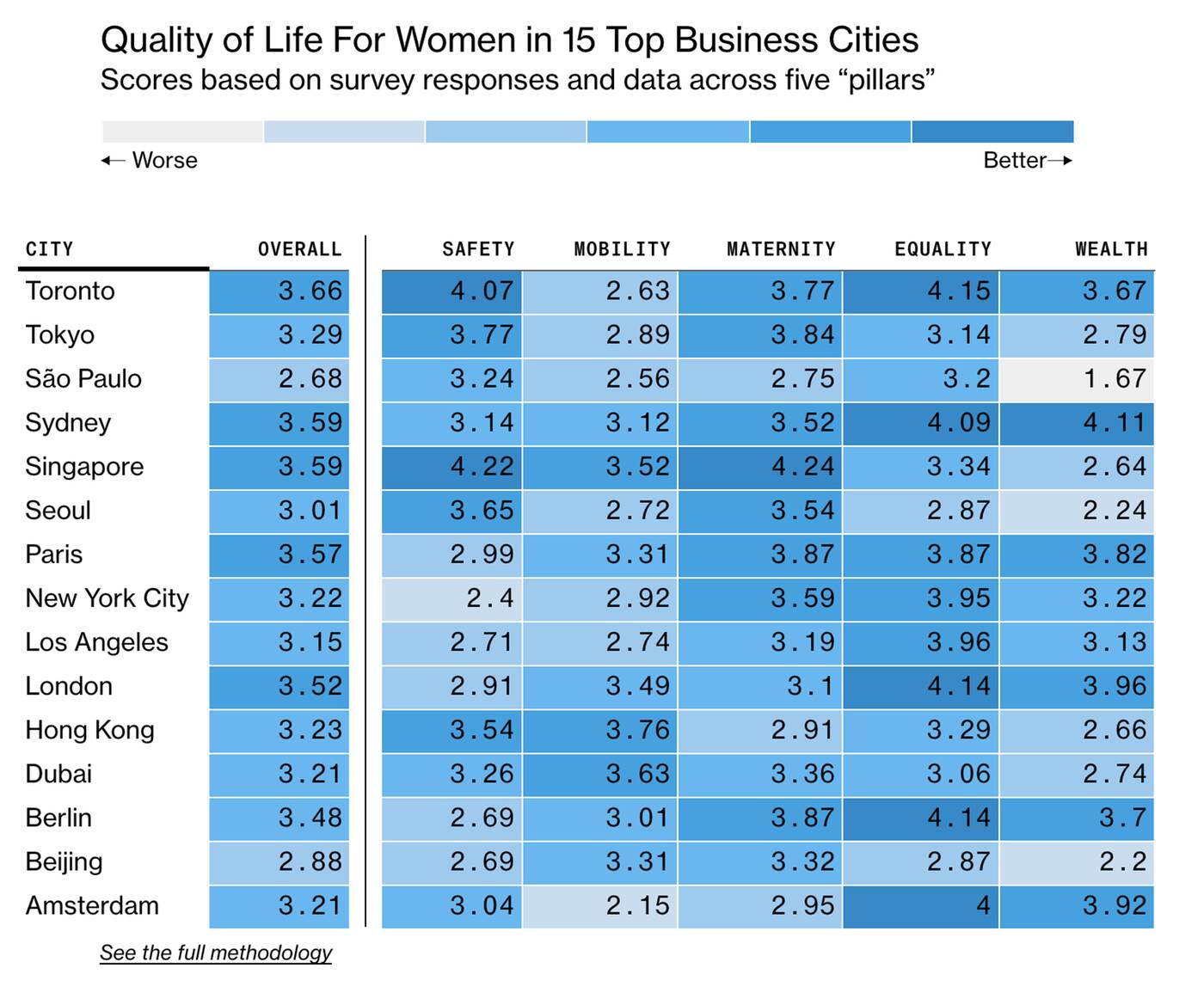 Toronto was ranked number one out of 15 business cities for quality of life fo women, performing best for overall safety, perceived equality and maternity provisions. Chart from Bloomberg Businessweek.

Though the 6ix was recognized for its general safety, equality in the workplace, maternity provisions and wealth, it only achieved a score of 3.66 out of a possible 5, showing, as the headline of the study indicates, that the world's top cities still have a lot of work to do when it comes to keeping women safe and combating both overt and quietly ingrained sexism.

One source, the president and chief executive officer of Women in Capital Markets, told Bloomberg that women in T.O. are still "underrepresented, outranked and usually out-earned, and face an array of structural barriers in the workplace," though she lauded the city for its diversity and dynamism.

The ranking also found Toronto to be falling short in the mobility department, which the outlet attributed to "traffic problems and an aging subway network."

And women in the city are still feeling a severe lack of gender parity, with one third of those surveyed either disagreeing or strongly disagreeing with the idea that they are treated the same as their male counterparts both on the job and in daily life. 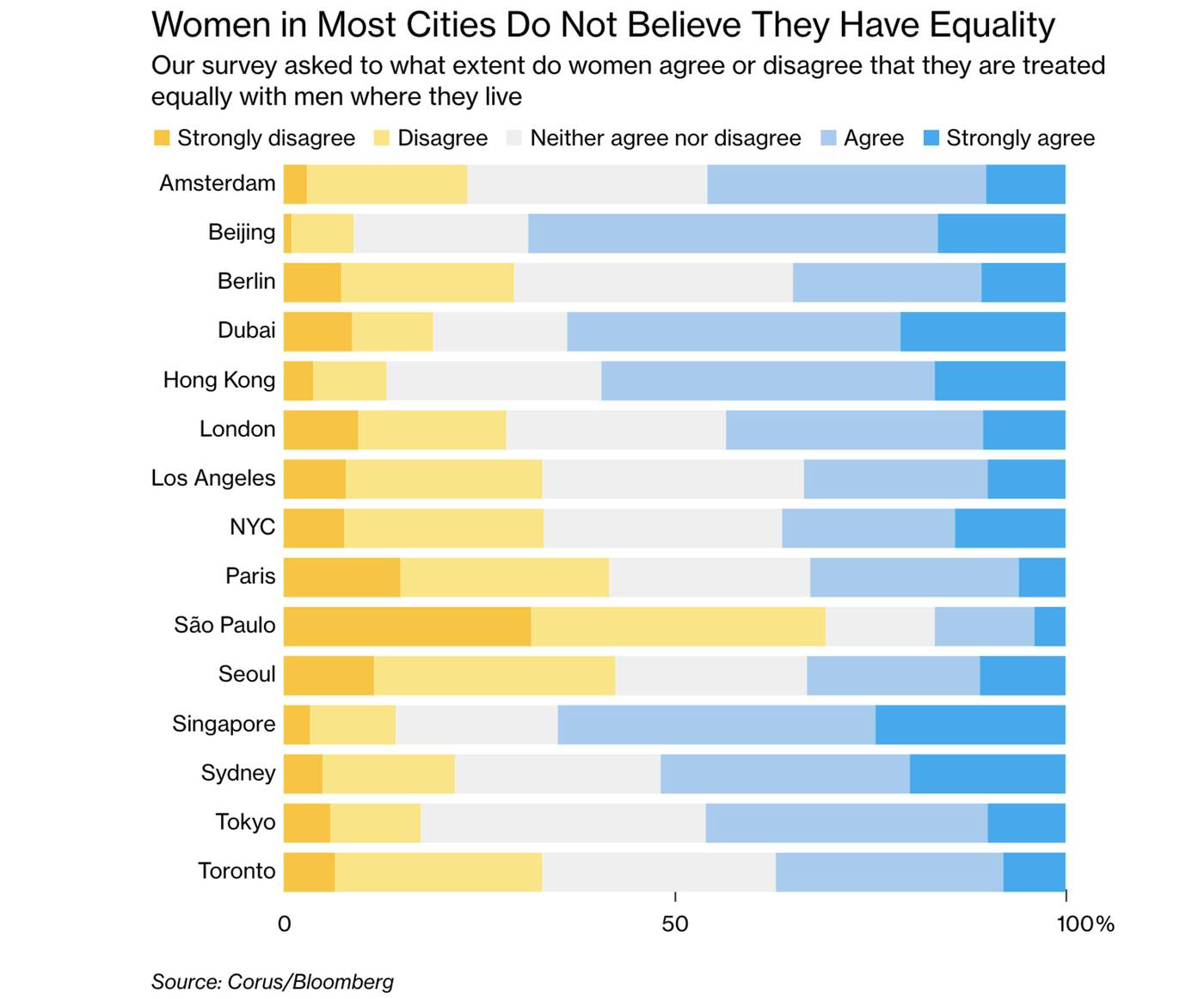 Many women in Toronto — and in all cities surveyed — do not feel that they are treated equally with men where they live. Chart from Bloomberg Businessweek.

A total of 34 per cent of Toronto businesswomen surveyed also say that they experience sexual harassment at least once or twice per month, some of them every single day.

Unfortunately, these numbers were similarly high in both areas of the survey for most cities.

Though Toronto came out on top of other key metropolises in this ranking, Bloomberg reiterates that there is still a lot of work to do when it comes to women's rights both in and out of the workplace, suggesting that the findings were pretty disappointing and that all cities are tragically failing women in countless ways.

"For the millions of working women in the world’s leading cities for doing business, daily life is often shaped by what they cannot do and how they’re excluded," the report reads.

"The performance from best to worst reveals that structural and social gender inequalities remain rife everywhere."