Given that Canada is a consistently well-ranked developed G7 country with some of the best cities in the world, you'd think that our residents would be pretty happy, all things considered.

Unfortunately, while COVID-19 and its consequences have taken a toll on both physical and mental health globally, the latter effects have hit Canadians quite hard, making the country one of the worst places in the world in which to endure the health crisis.

A new "misery index" measuring how countries have handled the pandemic — and how populations have responded — has actually placed Canada quite far below countries such as New Zealand and the U.S., which we're used to comparing to or surpassing in other areas.

(And yes, in this case, ranking further down the list is a bad thing, despite the name).

Canada was ranked 11 out of 15 countries assessed, "indicating a relatively poor performance in terms of reducing the misery of the pandemic," the new study from the MacDonald-Laurier Institute reads. "Relative to its peers, Canada gets a 'C' in terms of its overall performance." 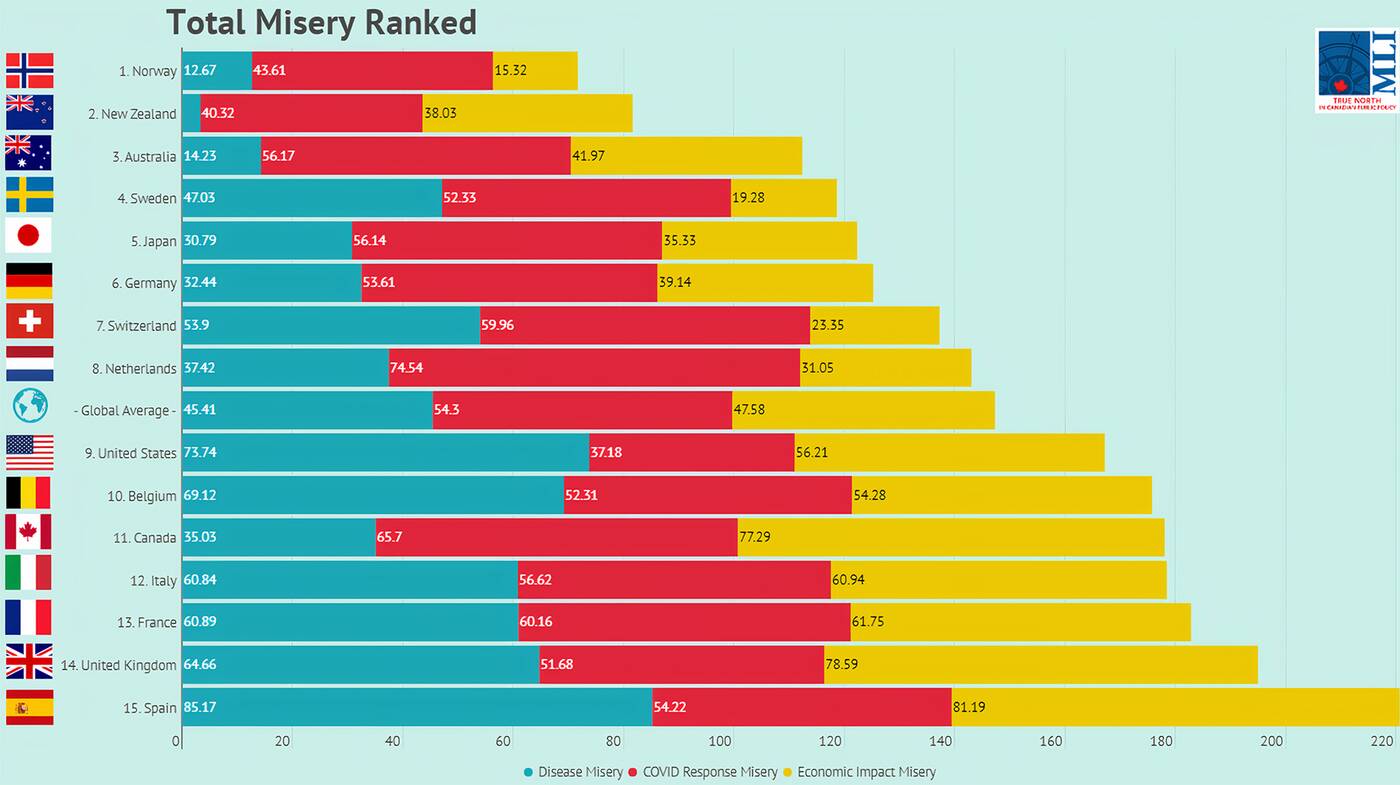 How Canada compared to other developed countries as far as misery caused by different aspects of the health crisis. Chart from the MacDonald Laurier Institute's COVID Misery Index.

It scored things like number of COVID cases, deaths, hospitalizations and ICU admissions per million residents in respective countries, also examining things like testing and vaccination rates, stringency of lockdown measures, unemployement rates and changes in GDP and public borrowing. 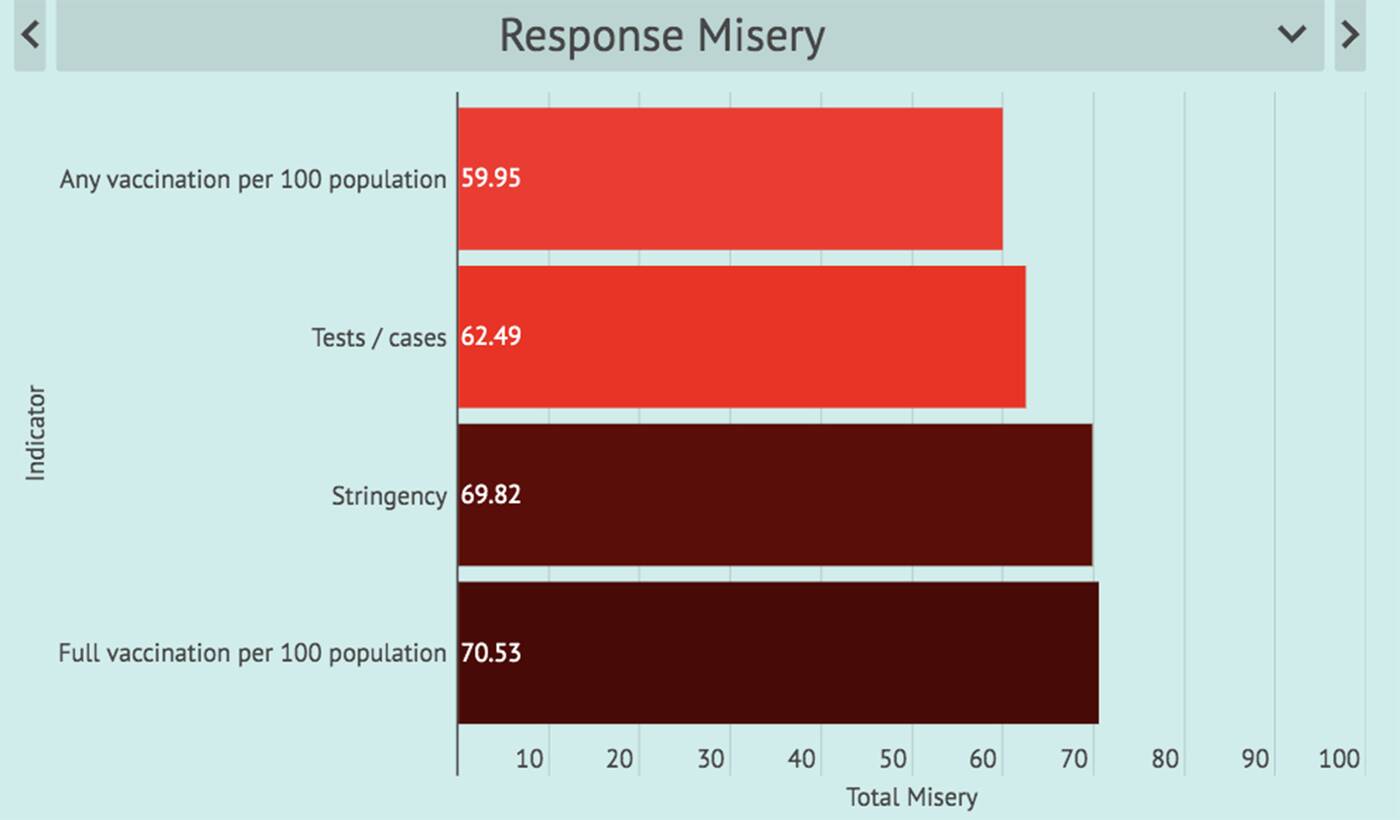 How miserable Canadians were based on different factors of our government's response to the virus. Chart from the MacDonald Laurier Institute's COVID Misery Index.

We thankfully evened things out when it came to our disease stats, coming in at 6 out of 15 or a 'B' grade for disease misery (again, a smaller number or higher on the list is better than a larger number or further down the list).

The report notes that our vaccine rollout has been nothing short of an absolute embarassment, saying that "while testing was relatively successful, Canada lags significantly on vaccinations. Furthermore, while Canada's lockdowns worked, they were among the most stringent and thus misery-inducing."

It adds that as for the economy "our recovery has been much slower than most and unemployment outcomes are extremely poor," in part thanks to lengthy and prohibitive lockdowns that have kept many out of work and eroded mental health. 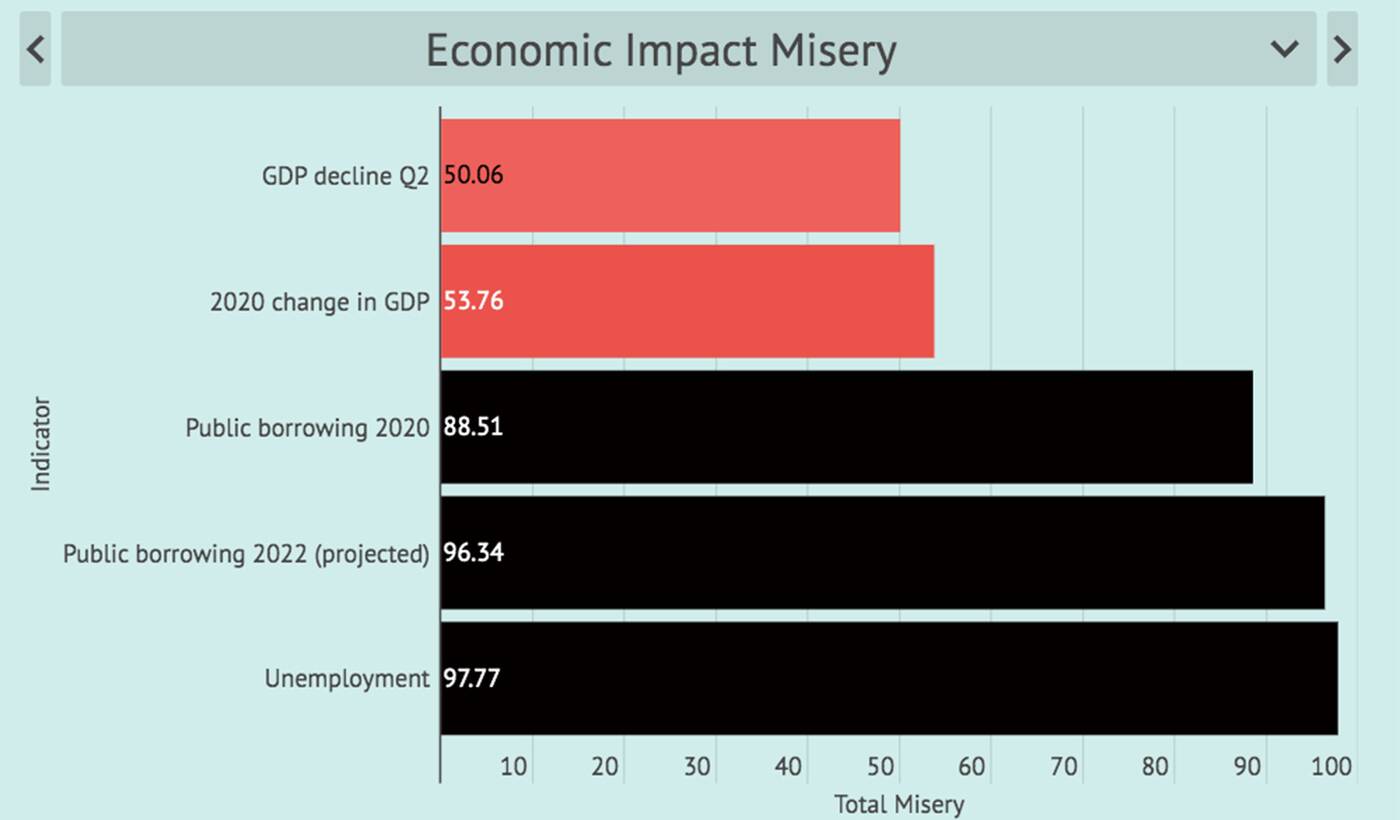 How miserable Canadians were based on different aspects of the economic impacts of the virus and our government's response to it. Chart from the MacDonald Laurier Institute's COVID Misery Index.

With parts of the country still extremely locked down as far as the rest of the world is concerned after so many weeks, it is undoubtable that existing through the last year in Canada has been pretty damn depressing — though we should be thankful when looking only at actual COVID stats to see that we've done pretty alright.