St. Augustine's Seminary has been a hidden school for priests in Toronto for over 100 years

St. Augustine's Seminary has stood tall in Toronto, surrounded by acres and acres of land for over a century.

Not only has this seminary been the training ground for generations of Toronto priests, its building and property have played a significant role in the city's history. 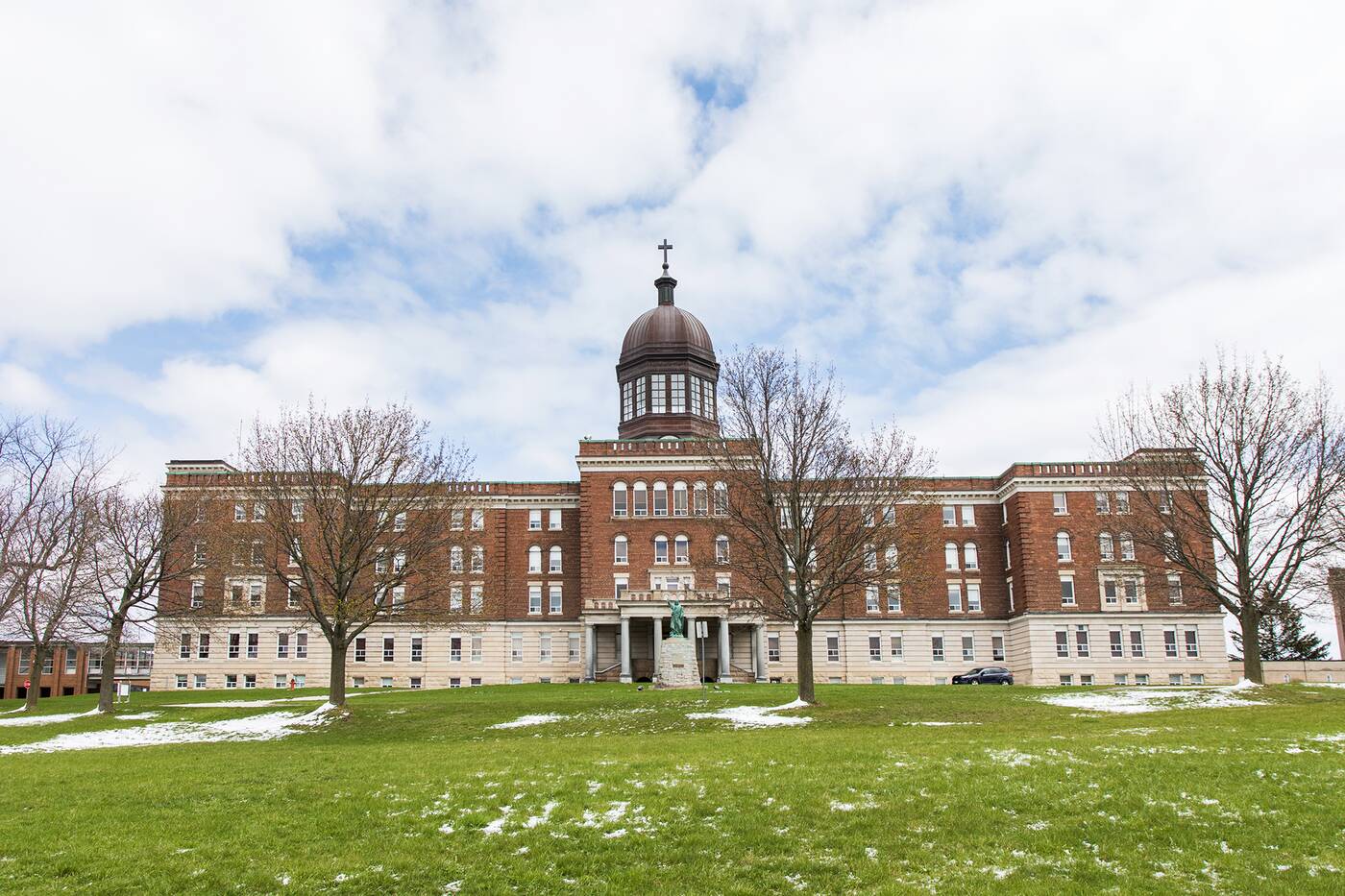 St. Augustine's Seminary is located on Kingston Road in Scarborough.

At the beginning of the 20th century, there was no seminary for training Catholic priests in English-speaking Canada. 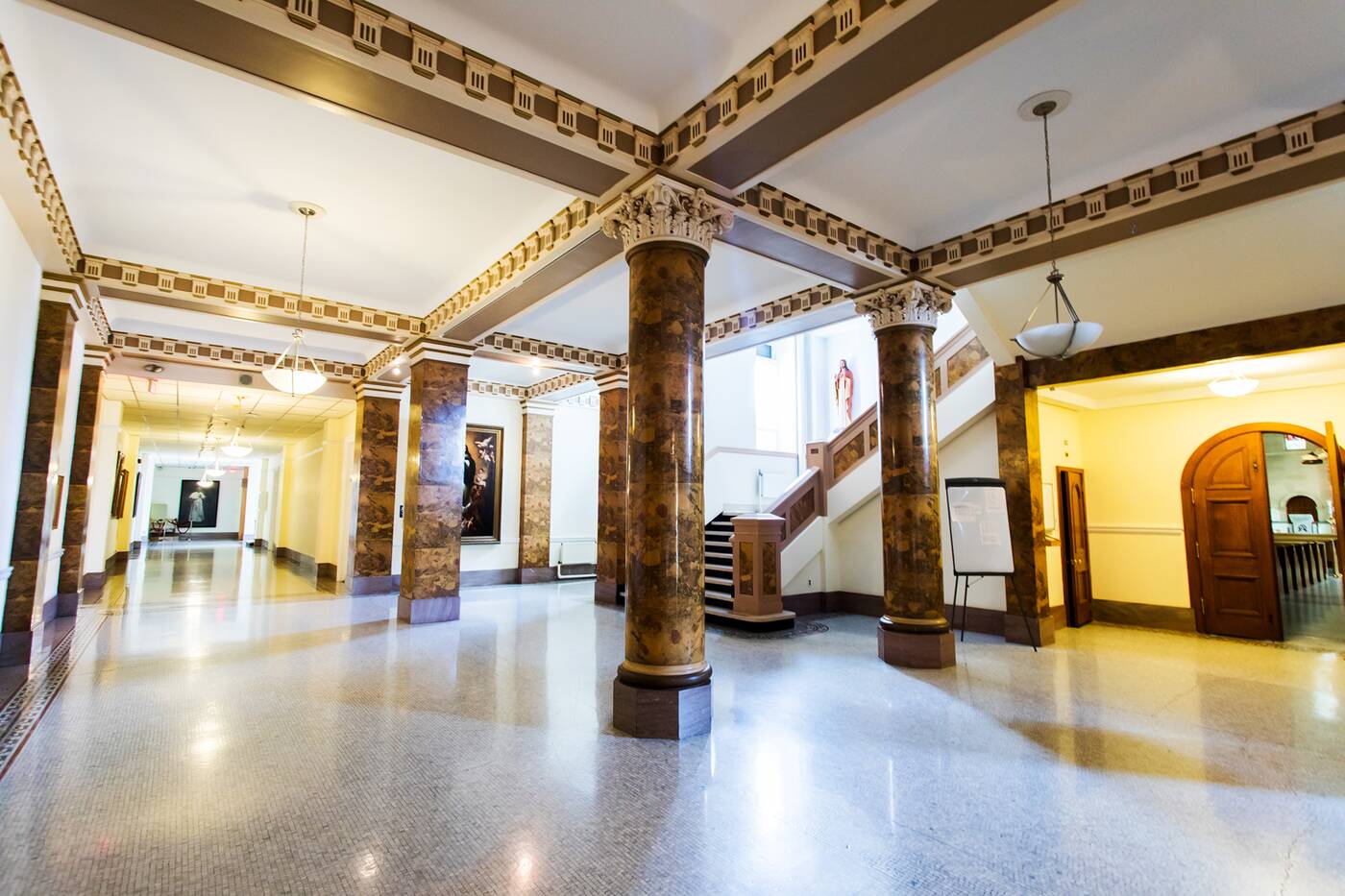 The inside of the seminary is lined with columns.

"They weren't successful for a whole bunch of reasons, mostly to do with finances and the reality of a province that wasn't really ready for such a big institution in that way."

According to his book, the success of St. Augustine's was down to the Archbishop of Toronto at the time, Fergus Patrick McEvay, and a man named Eugene O'Keefe. 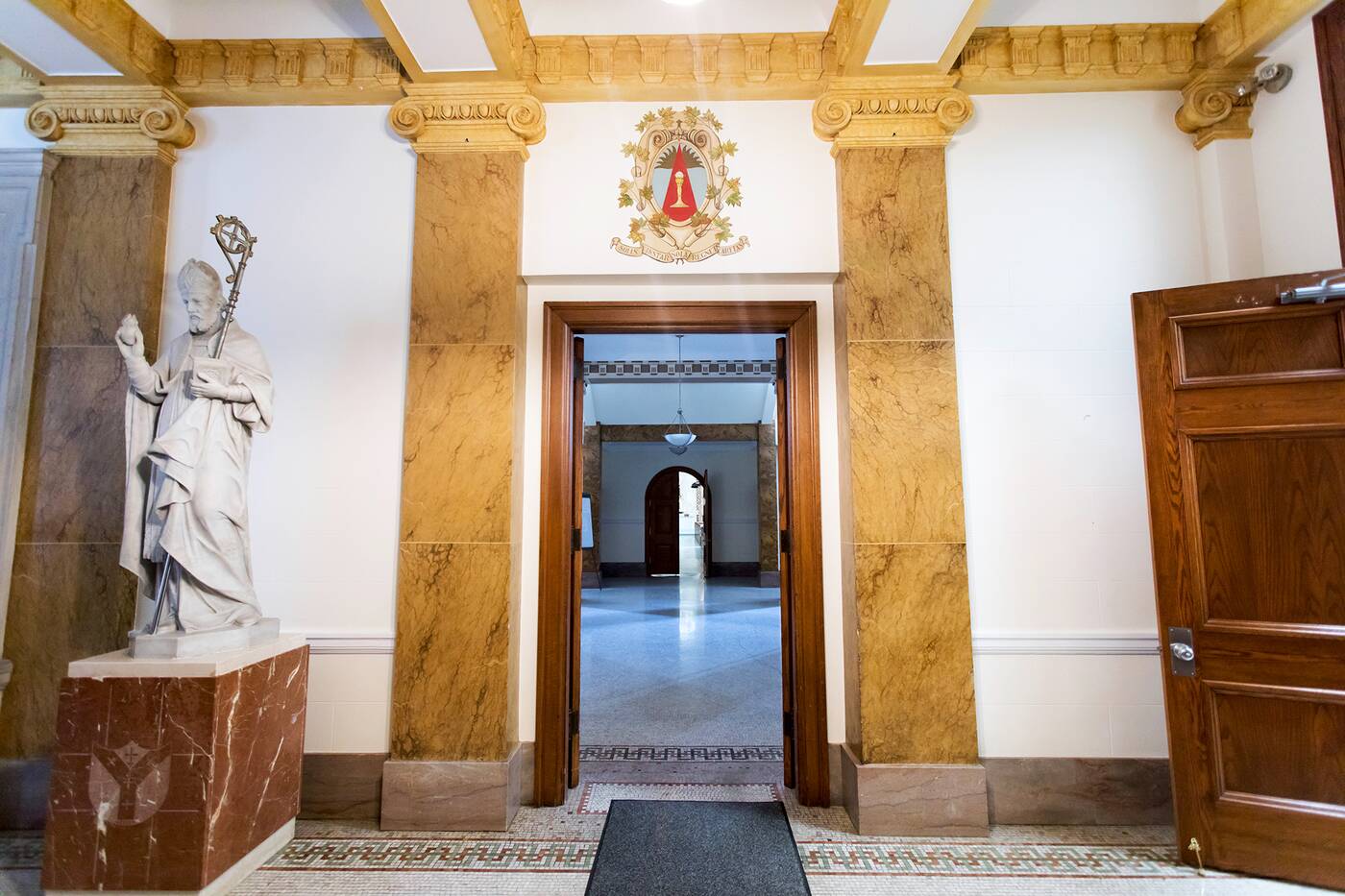 St. Augustine's was built with function in mind.

While the archbishop saw a need for this type of institution in Toronto, he did not have the funds to build one, which is where O'Keefe came in.

He was the founder of the O'Keefe brewery, one of the country's most successful beer-makers, which he had started at the corner of Victoria and Gould streets. His son died prematurely in 1911, which ended his desire to continue building the company. He sold it (in part to Henry Pellatt, who built Casa Loma), and got serious about philanthropy. 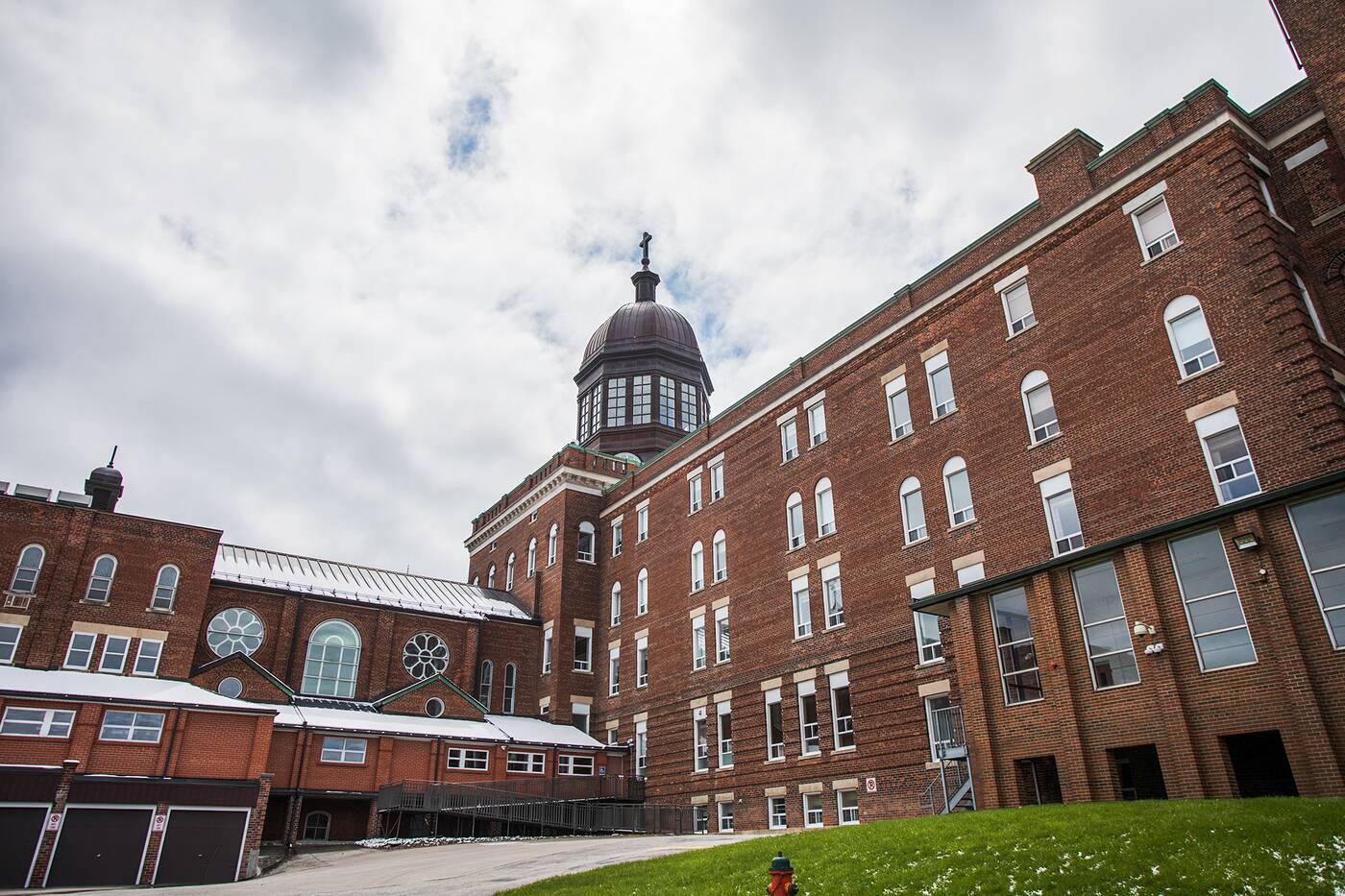 A huge copper dome stands on top of the building.

After speaking with the archbishop he decided to donate $400,000 dollars – the equivalent of about $9 million today – which was enough money to start building the seminary.

"So in some ways, the seminary is actually based on the success of a Catholic brewer. It was kind of built on beer to some degree," said Hogan. 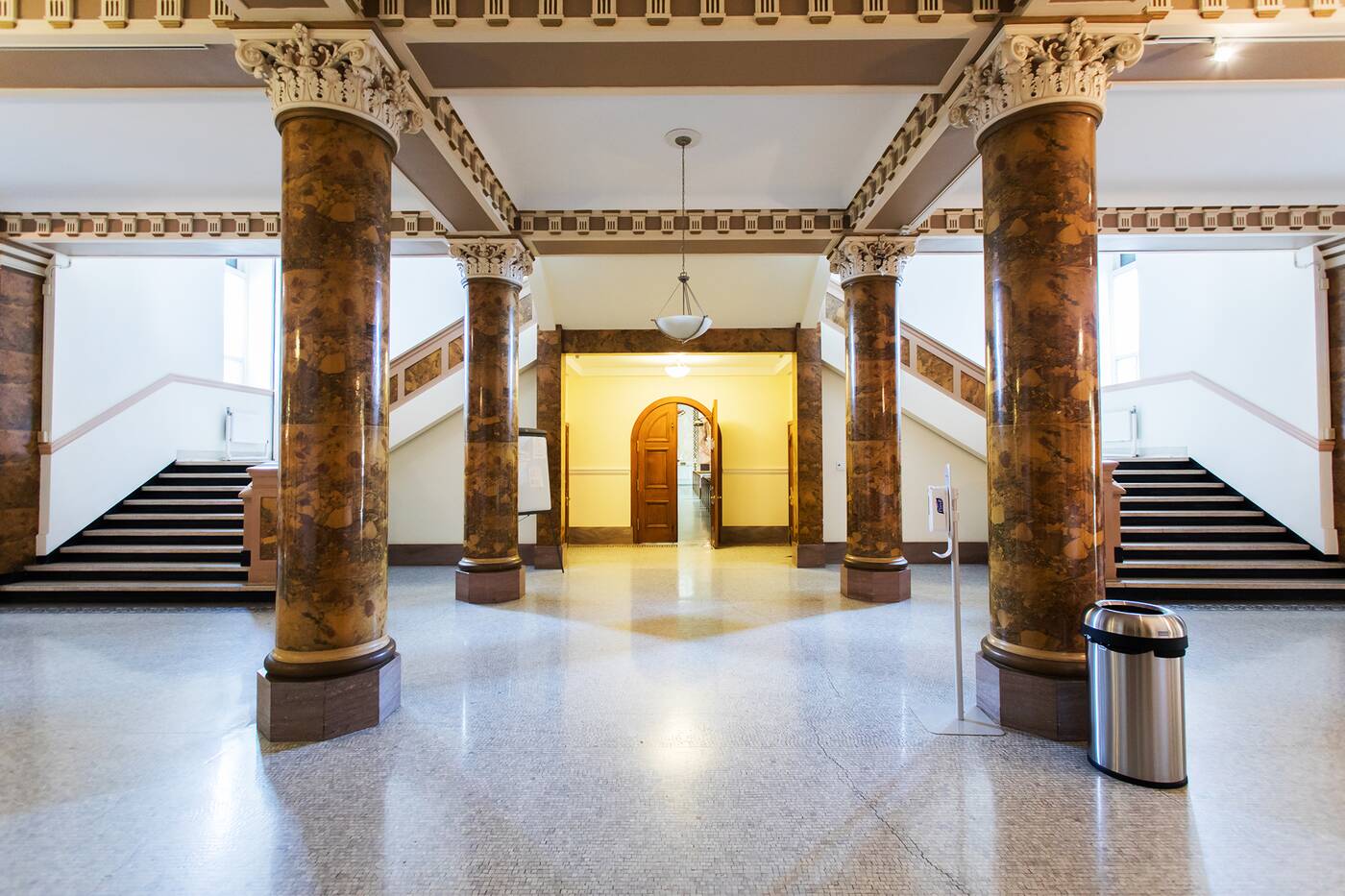 Staircases lead up to the upper levels where seminarians reside.

Completed in 1913, the seminary was one of the first reinforced concrete buildings in Toronto. It was designed by famous architect A.W. Holmes in a Beaux-Arts style.

He also designed Holy Name Parish on the Danforth at Gough, among many others.

One of the most notable parts of the seminary is its huge copper dome. But the inside is no less impressive. 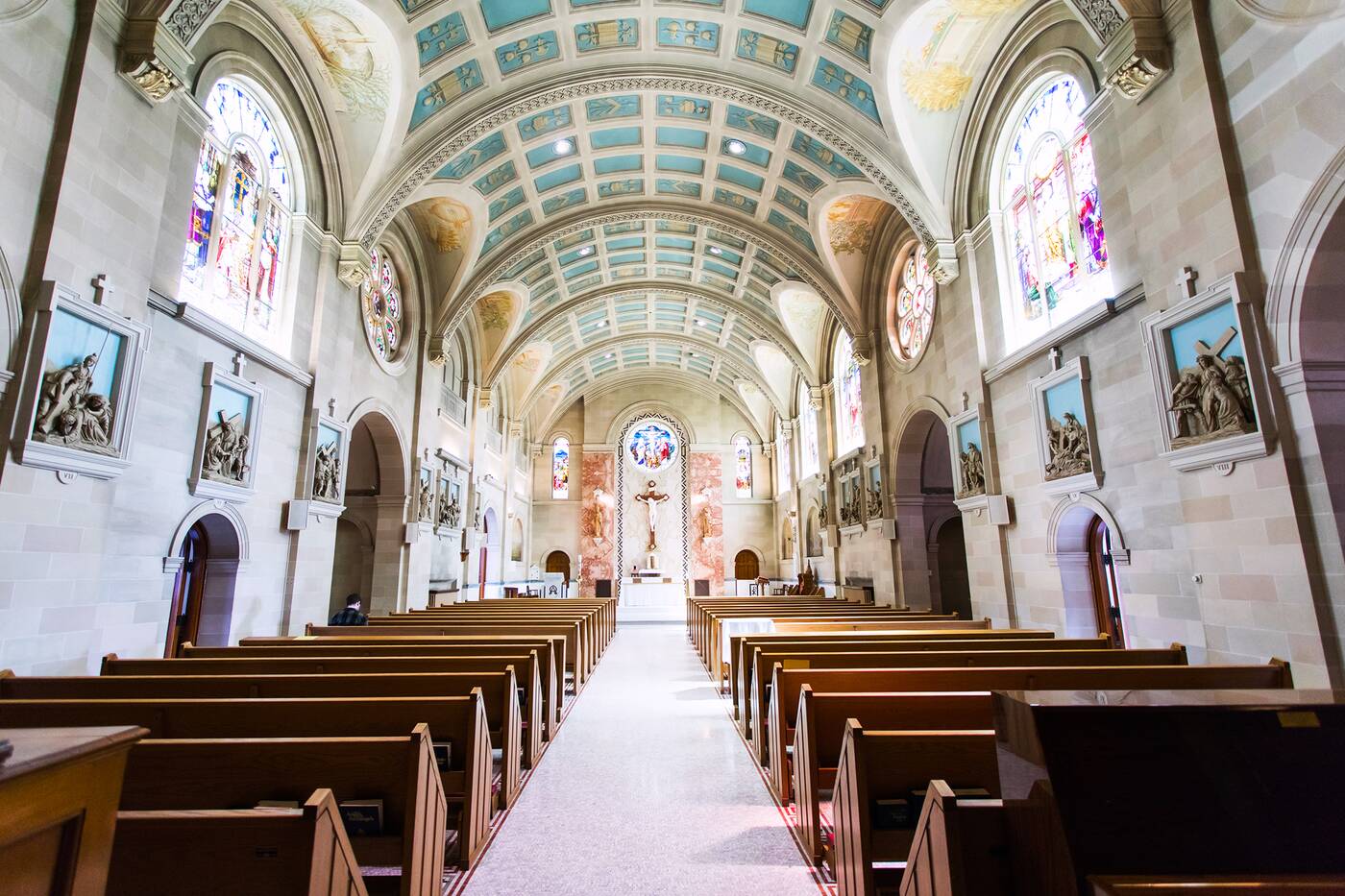 St. Augustine's chapel is in the centre of the building.

There's a spacious foyer and huge main hallway lined with columns that are meant to make an impression on you.

"St. Augustine’s seminary is this large building, and in the very centre is the chapel. It makes sense because the liturgical life of worship, of prayer, of the celebration of mass, is so central to everything that happens here," Hogan says. 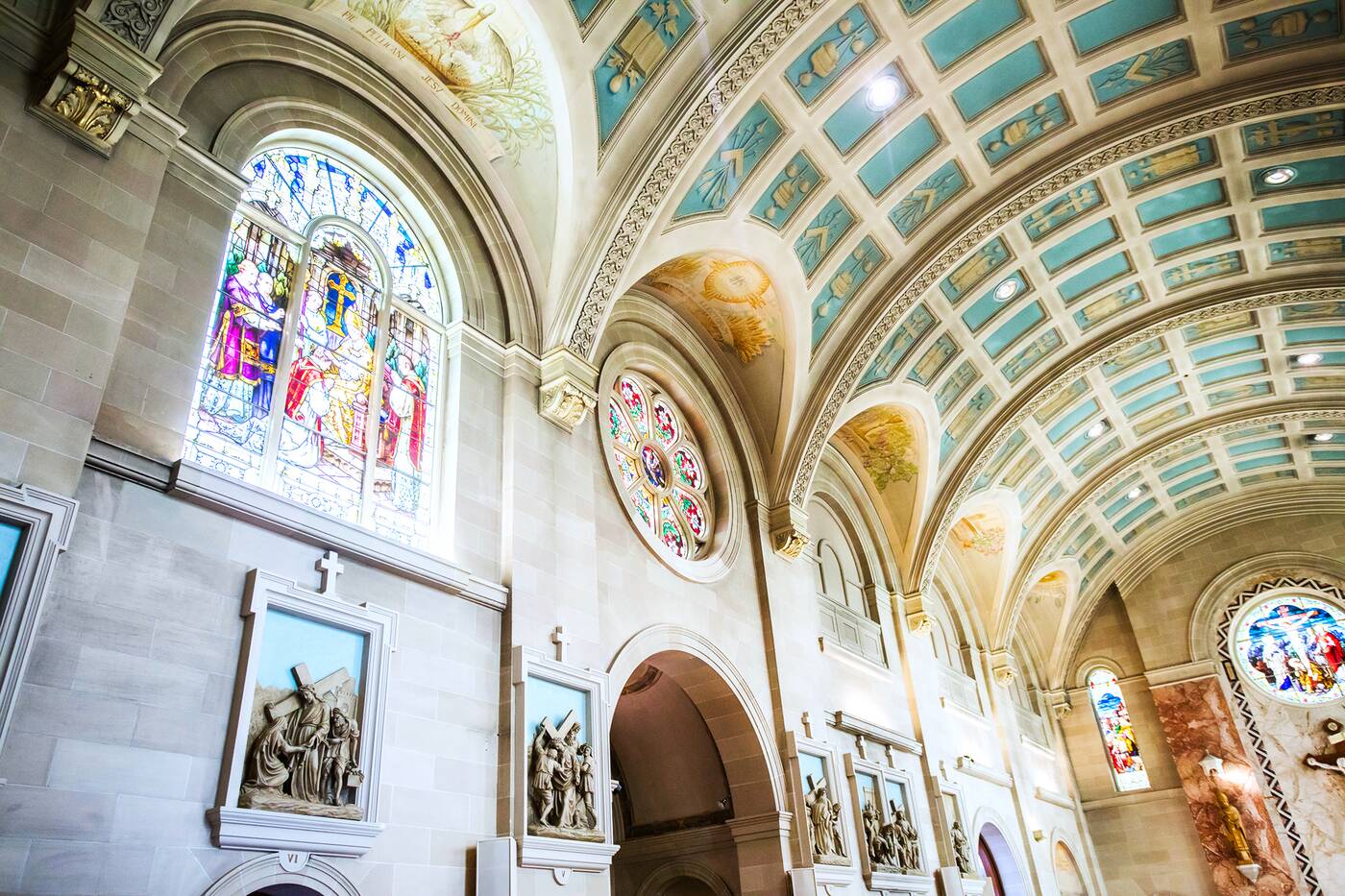 The chapel is known as the focal point of the seminary and serves as a gathering place for prayer and celebrations.

When visiting, it's hard not to notice just how big the seminary is compared to other developments surrounding it, and this isn't a coincidence.

According to Hogan's book, the seminary was built at a time when that area was completely empty.

It was self-sustaining for years, because the lot of land they were on was used for farming and had access to Lake Ontario's fresh water. 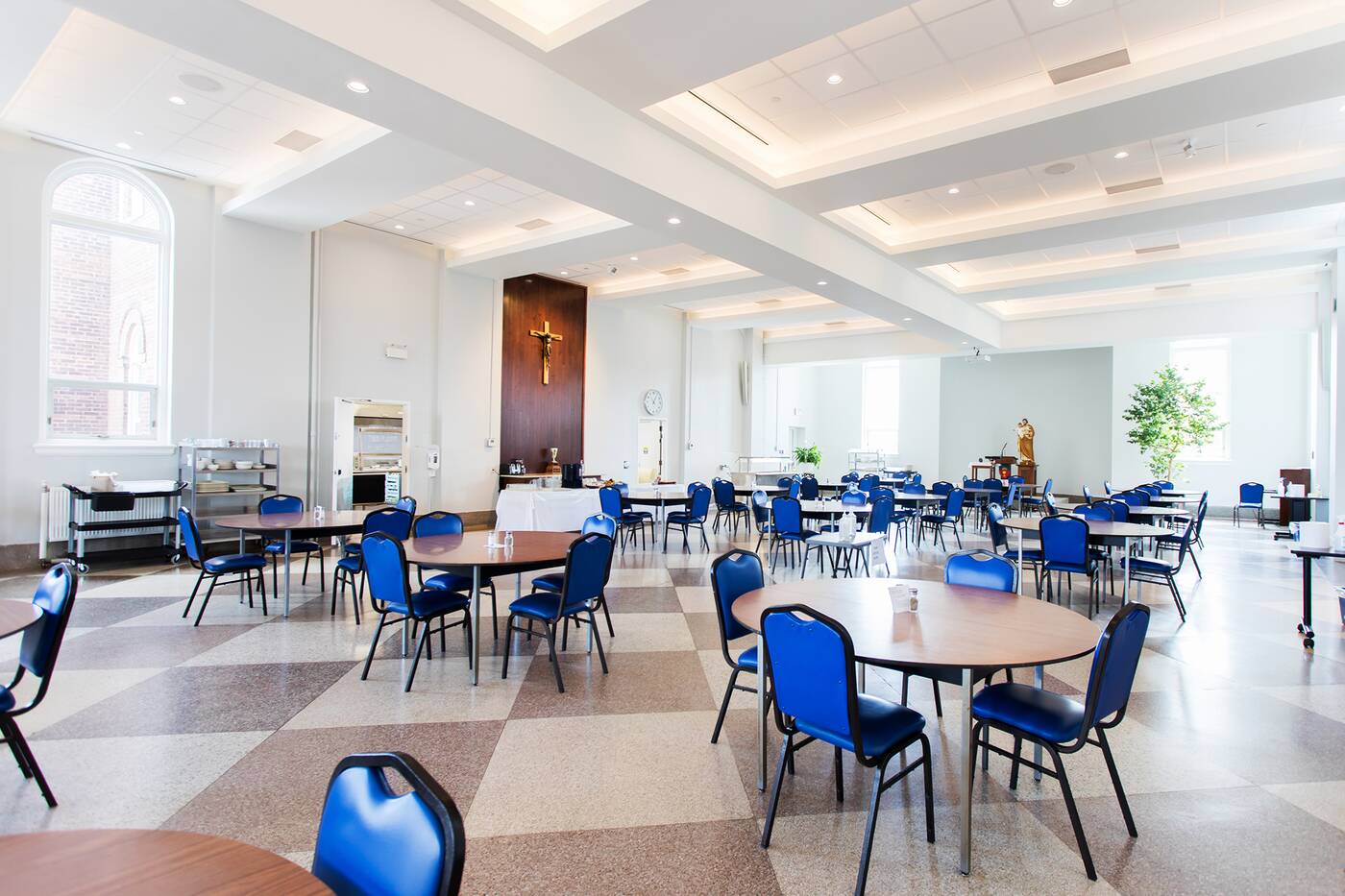 The cafeteria is bright and airy.

"There was no municipal water coming out there because it was so far from the city," explained Hogan."It was also a fully functional and operating farm with fields, orchards and livestock."

While the seminary no longer farms chickens and pigs, they have been able to keep quite a bit of land.

"The property is pretty big, which makes it even more impressive, especially in a city where everything's getting congested. It's so nice to see a big building that can still inspire you by not being surrounded by so many buildings," said Hogan. 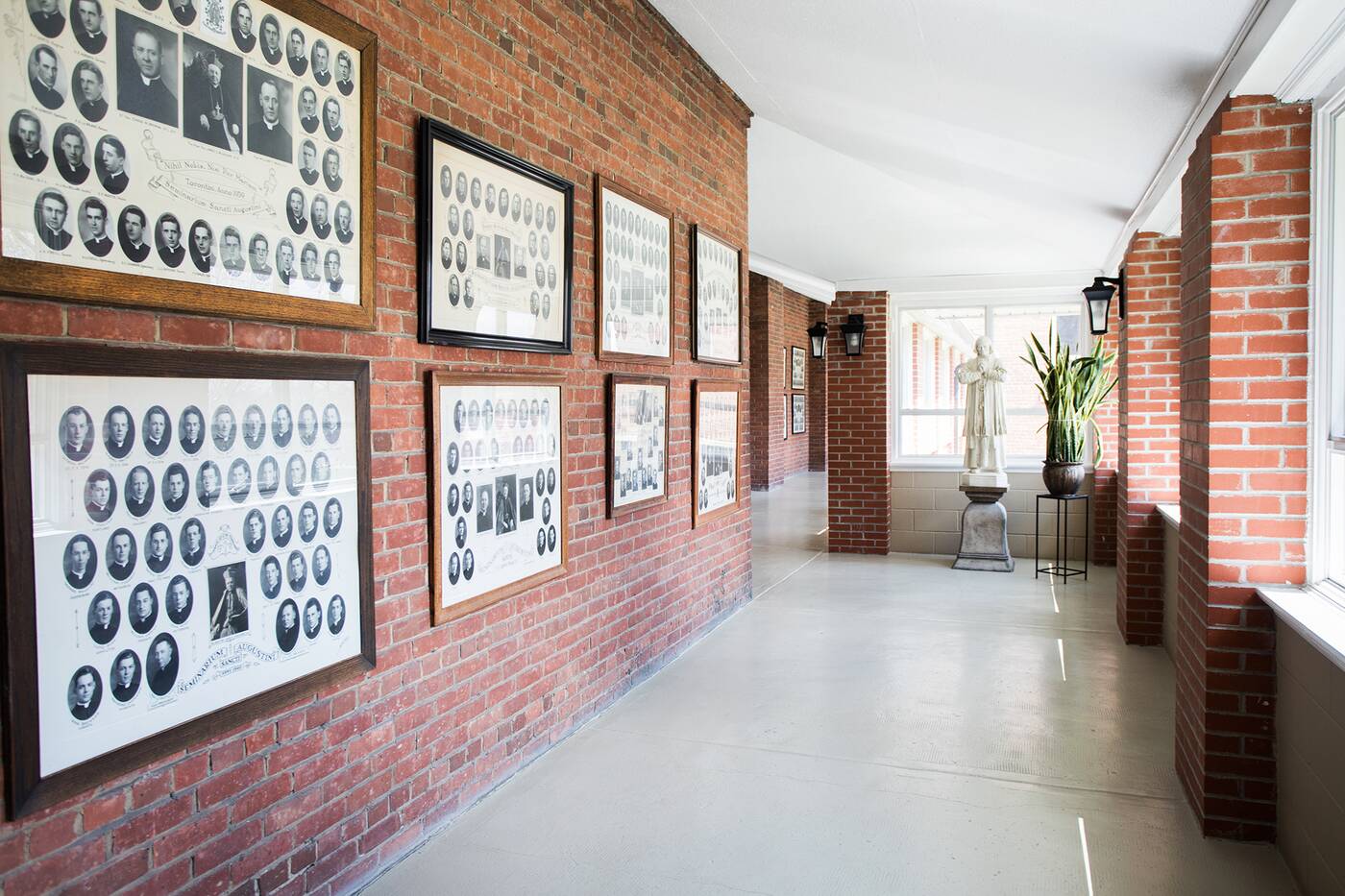 A wall lined with photos of graduating classes.

Of course, the building serves more of a function than just looking impressive. The upper floors are used as residences for the seminarians who attend classes at the Toronto School of Theology, which is associated with the University of Toronto. 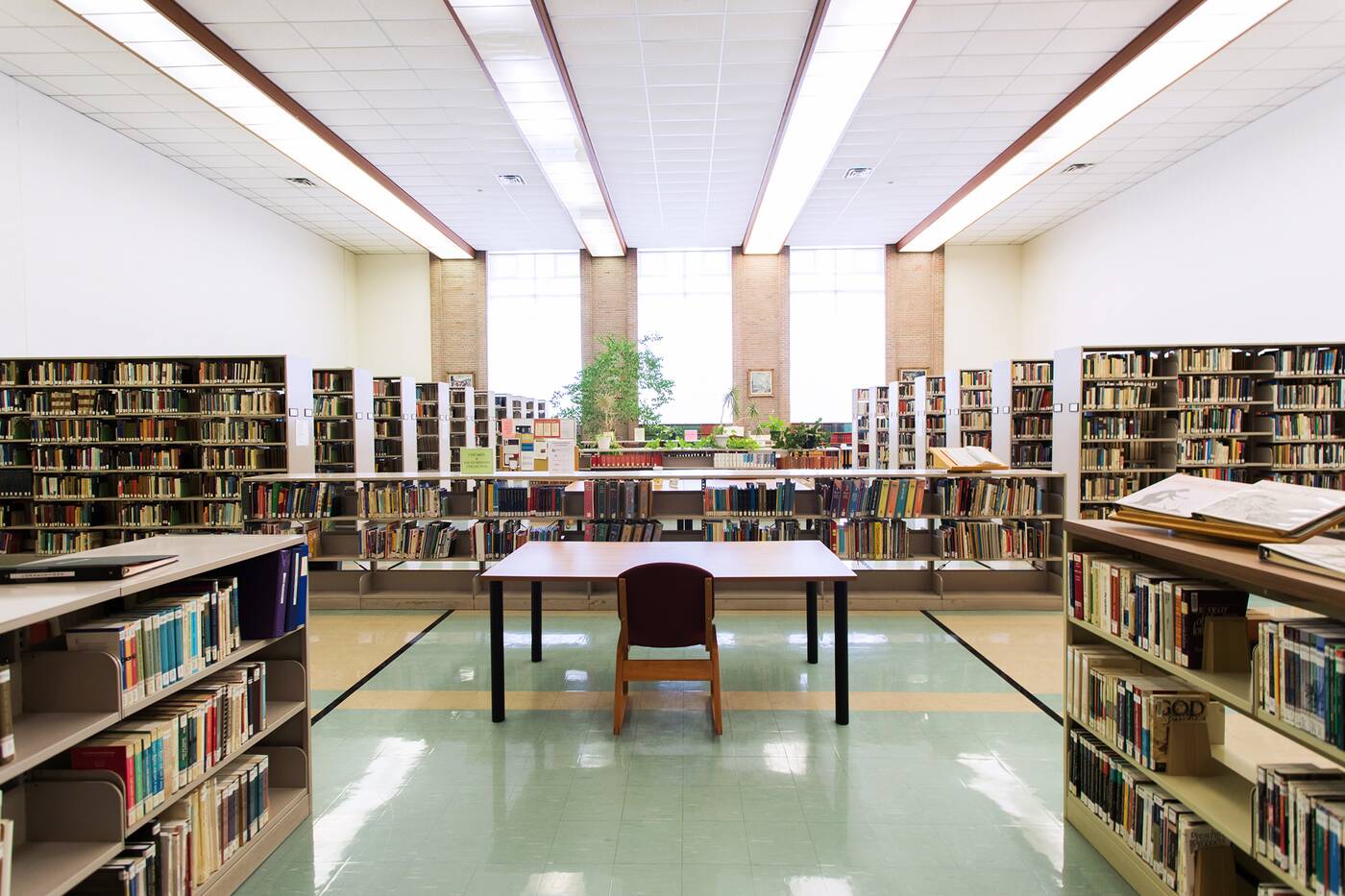 The seminary's library is stocked with a variety of books.

"They go downtown to study for the most part and then this is their residence, their place of prayer, their place of community. The whole place is really designed for them," said Hogan.

Inside the building, you can find a library and cafeteria, as well as entertainment and sports facilities. Normally the students would have access to everything, but with the COVID-19 pandemic, activities are limited.

The seminarians are still allowed to live there but have to follow all guidelines and restrictions, including practicing social distancing at all times. 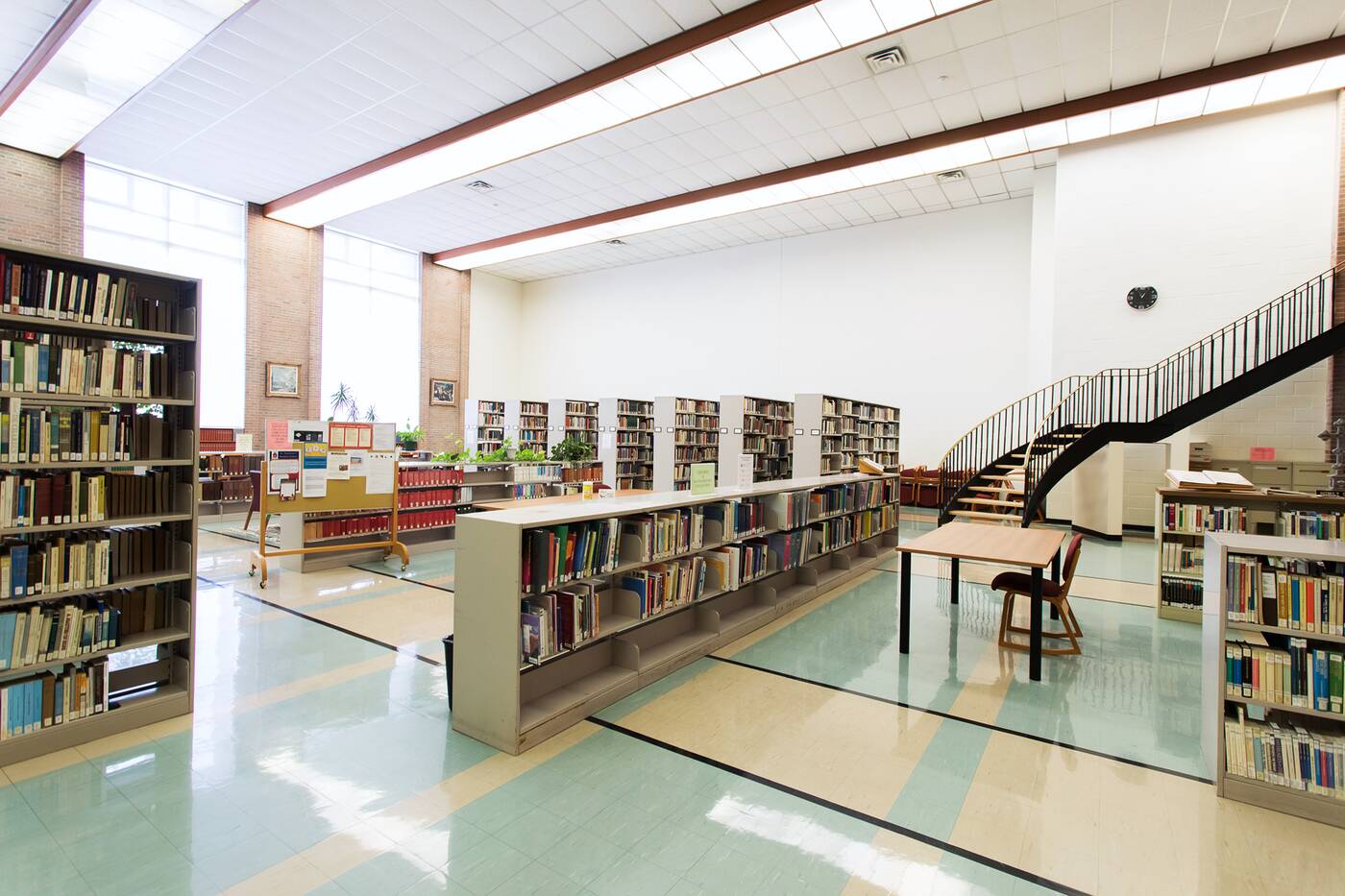 The seminary's library features curved staircases that lead up to the building's second floor.

"I think that that the seminarians realize that everybody is making sacrifices right now and it's part of what you have to do at the moment to protect other people."

While some of the seminary's teaching techniques have been passed down for decades, they are also adapting to modern times. Hogan said that by using Zoom seminarians are able to communicate with each other and attend virtual classes. 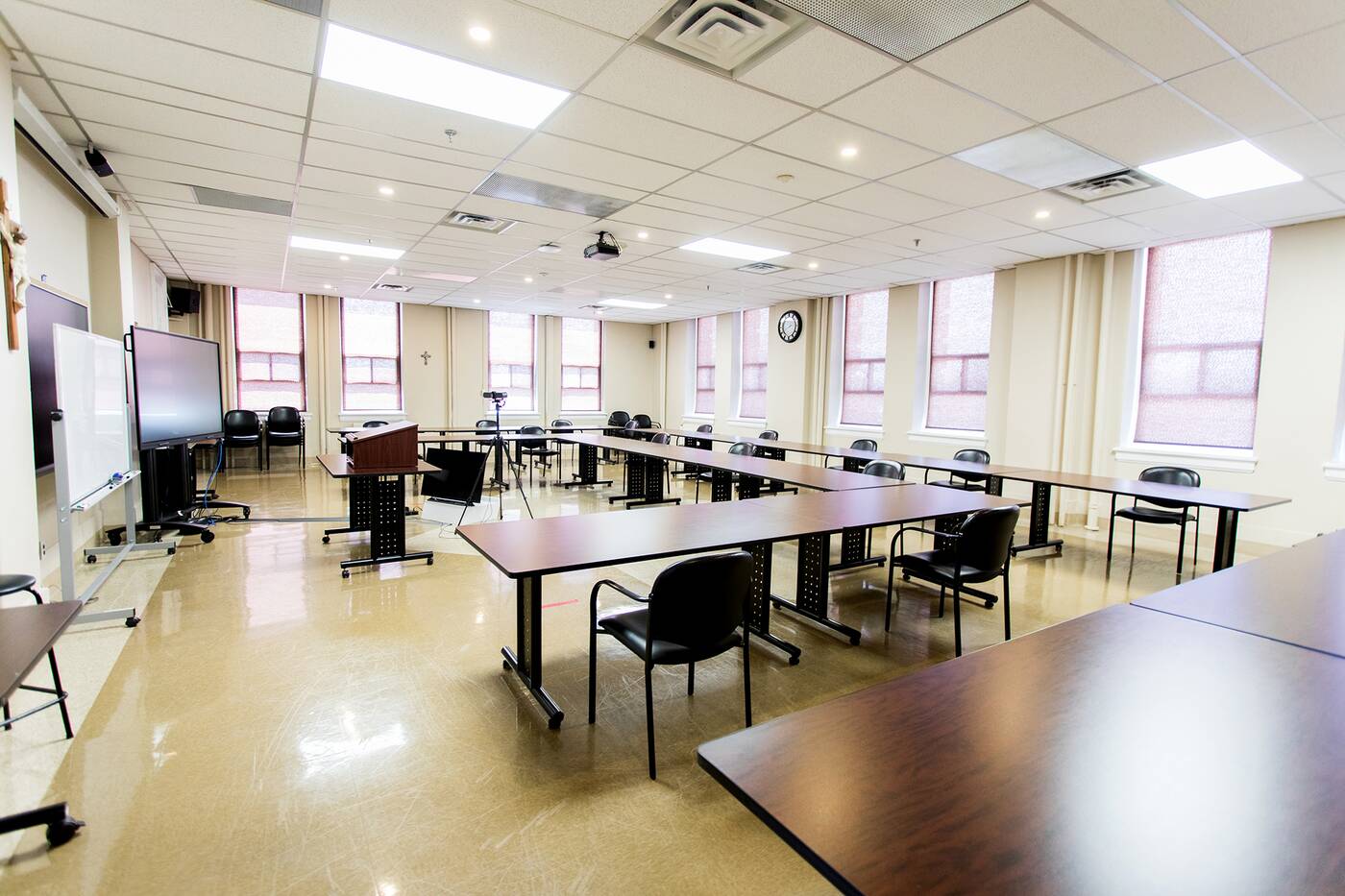 The classrooms are pretty classroomy.

He explained that financially, the seminary is in a very good position.

"Lots of Catholics in the Archdiocese of Toronto believe in the mission of the seminary and want to have good and holy priests. So they're willing to assist with subsidizing this through their contributions to our Catholic charity called ShareLife." 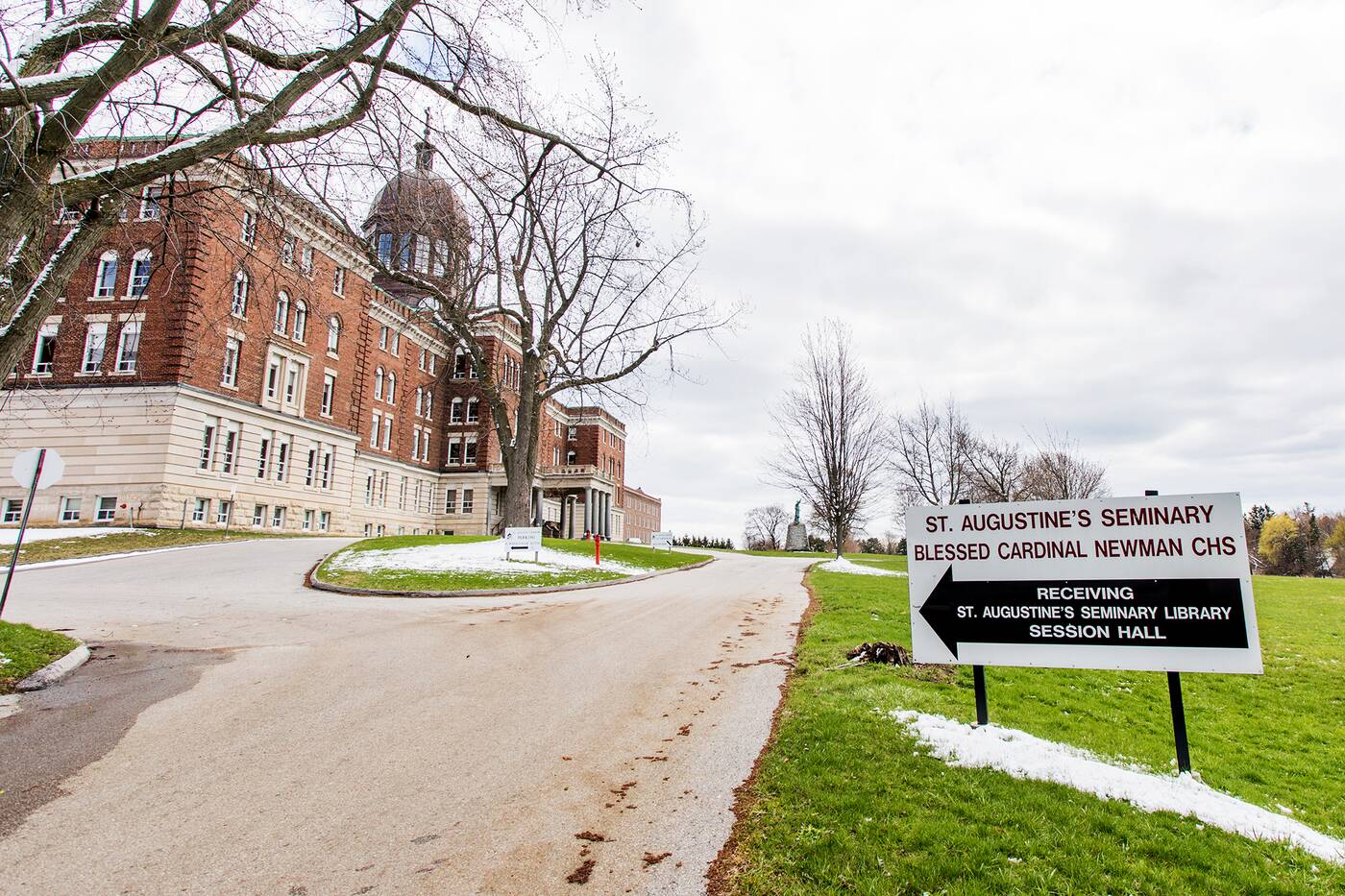 The entrance to St. Augustine's Seminary.

Through these donations, the seminary is able to stay alive and provide all of the resources needed for the seminarians to become priests.

"The future is pretty bright I think," Hogan says. "I would say, God willing, we will be here in another 100 years still helping to train priests for the future of the Archdiocese of Canada."