Toronto woman's nose bitten off during vicious fight with boyfriend

What started out as a fun New Year's Eve at a downtown Toronto nightclub turned into a waking nightmare for one young woman who says her now-ex boyfriend bit off her nose during a violent dispute.

Allyson Danylko, 24, says she was ringing in the New Year at EFS near King and Bathurst with her boyfriend when he started acting "weird" and "jealous."

The couple is said to have argued all night, eventually driving to an Oakville townhouse where Danylko says she was assaulted by 30-year-old Nick Grewal.

"Chunk of my nose gone, pretty f*cking sick, love my life," she said from a hospital bed in an Instagram Story posted January 1.

Crying, Danylko peeled back the bandage covering her face to reveal that a large part of her nose was indeed missing.

The young woman has been speaking on Instagram at length about what happened to her in the days since, posting dozens of videos showing her injured face in a Stories gallery labelled with the broken heart emoji.

"I got into an argument with my boyfriend, yesterday after we left the club, you know for New Year's," said Danylko in one of the first Instagram Stories posts from her bed. "He proceeded to attack me and... he bit off my nose."

Danylko went on to explain that she'd need a skin and cartilage graft, as police had been unable to locate her missing body part.

"The piece of nose that was bitten off by him, couldn't be found... even after they brought the canine unit into his house," said a weeping Danylko in a Stories post on January 1.

"So he either chewed it up and ate it or he flushed it down the toilet."

Halton Regional Police confirmed that they were called to Grewal's home early on January 1, and that a woman's nose had been bitten off.

Grewal has been charged with aggravated assault, forcible confinement and failure to comply with probation. He will appear in court on January 28.

The bio for a private Instagram profile that Danylko linked to when tagging her ex boyfriend reads "2 sides 2 every... [broken heart emoji]."

A YouTube account linked to on that profile containing several original rap songs is now flooded with comments decrying the artist behind it as "trash," "evil" and "sick."

"This song sucks and your other music does to, and so do you for biting off that girls nose," reads one comment on the account's most-recent upload.

"Yeah eating that girl's nose was abnormal behaviour," reads one on a song entitled "Abnormal Behaviour." 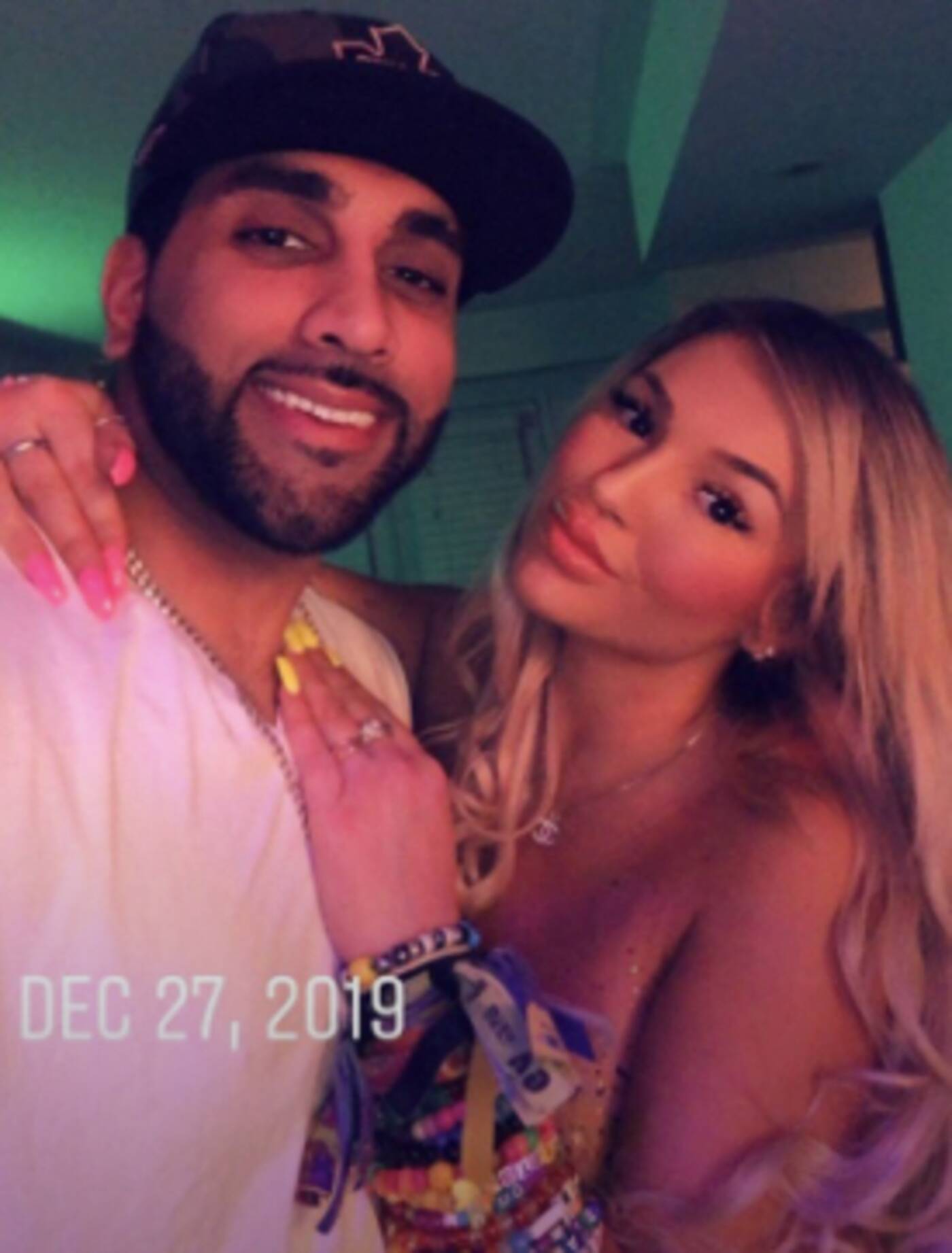 This photo, posted to Danylko's Instagram Stories, shows the Toronto woman and her alleged attacker a few days before her nose was bitten off. Image via Allyson Danylko.

Danylko told her Instagram followers in an update that "Nick was arrested immediately after the incident," and also revealed that this wasn't the first time he is alleged to have assaulted her.

The young woman says she got a restraining order against Grewal after he attacked her in August, but that she later started dating him again.

"I want my story to help others know of this this domestic abuse situation," she wrote in an Instagram post on January 3. "Never ever EVER do I want another to go through the excruciating pain, the trauma of blood pouring into your clothes as it was a piece of facial tissue that had been chewed off as I was."

"I was beyond in shock and horrific realization when I saw my image in a mirror 2 hours after the incident I couldn’t believe it to be true..." she continued.

"But this is my life now I have a hole missing off my nose. I have a bandage that must always have to be covering the wound to prevent infection. I will have a skin graft from a piece taken off my ear that they use as they couldn’t use the flesh that was ripped off of my nose on account he either swallowed it or flushed it in the toilet."

Reconstructive surgery for the young woman's nose is scheduled for March, when her wound is expected to have healed completely.

Stephanie Danylko, Allyson's mother, has organized a GoFundMe campaign to help cover expenses while her daughter is off work.

"Allyson was brutally assaulted on January 1st, 2020. Her attacker bit off her nose to the bone, causing substantial physical damage as well as mental and emotional trauma," reads the fundraising page.

"Because of her lengthy recovery process, (her surgery is scheduled in March), she is not able to work at her very public job, as her face would need to be covered for obvious reasons," Stephanie wrote of Allyson, who is listed as an actor and extra on several local talent websites.

"Allyson does not have any benefits or insurance to cover her time off work so we are asking for funds so that she may be able to pay for essentials like rent, bills and food. She will be able to return to work in May."

Danylko says that, while she is traumatized, she is optimistic about her future and grateful for the public support she has recieved.

"I am a survivor and I cannot be broken," she said in one of her most-recent Instagram Stories threads. "It's not the end of the world. The only thing that matters is that I'm alive and that I did escape... I escaped and I got help."

"Justice will be served," she said of her now-ex boyfriend. "Until trial, all we can do is spread awareness towards domestic abuse."

"Just know you are not alone and I am here and we will get through this and be stronger than ever," said Danylko, addressing other women who may be dealing with abusive partners.

"Thank you for all of the support... God's watching over me. This will work out."