The essential guide to plane spotting in Toronto

Plane spotting is probably one of the geekier ways to spend an afternoon in Toronto, but you might be surprised at just how exhilarating the exercise is until you've tried it. The experience of a 50+ ton aircraft passing right over head is a feast for both your eyes and ears. 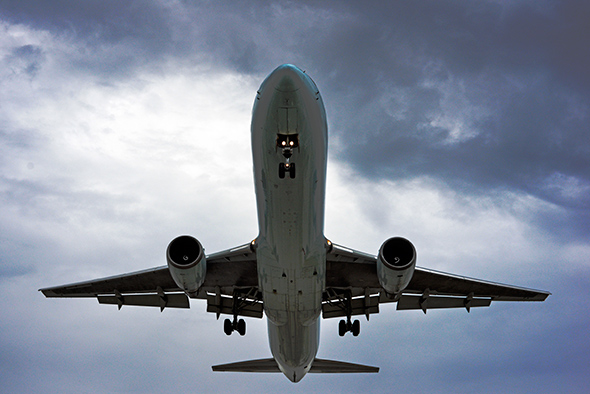 It's also a remarkably easy adventure to plan that requires very little expertise. I've been intrigued with the idea of plane spotting for quite some time, but only recently made a few trips up to Pearson to take in the spectacle first hand. There's something both comforting and terrifying about witnessing the careful choreography of these hulking specimens of modern technology. 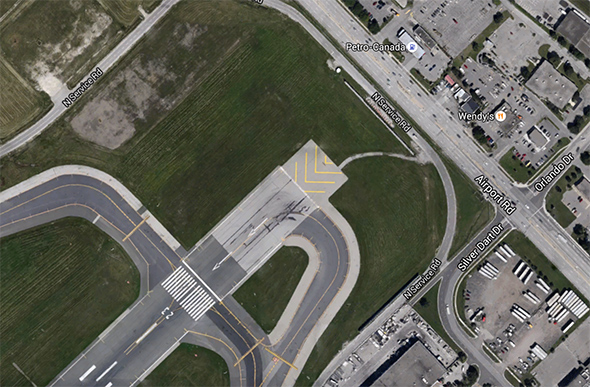 The first thing you need to know to plan a plane spotting trip is the best viewing areas. There are a few to choose from, but one is by far the best so long as the wind is cooperating when you pay your visit. Immediately to the northeast of Runway 23, you'll find a Petro Canada Station and a Wendy's. There's ample parking around here, so leaving your car for a while is safe. 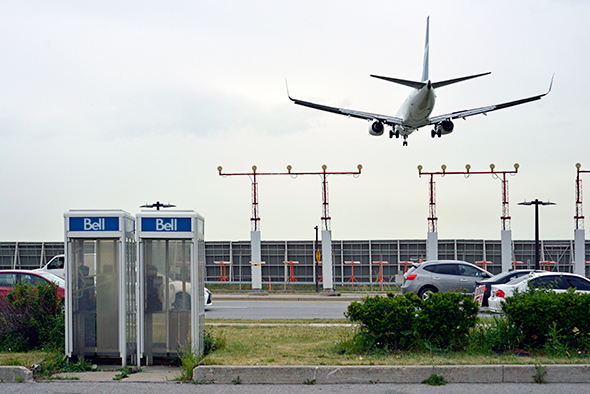 Look for the ILS equipment that's nestled between the two businesses (it's a bit closer to the gas station), which will tell you exactly where the line of the runway is. This is the longest runway at Pearson, and the spot where you're most likely to see the biggest planes land. It's also the closest you can safely get to the beginning of a runway, so the visual impact is most stunning from this vantage point. 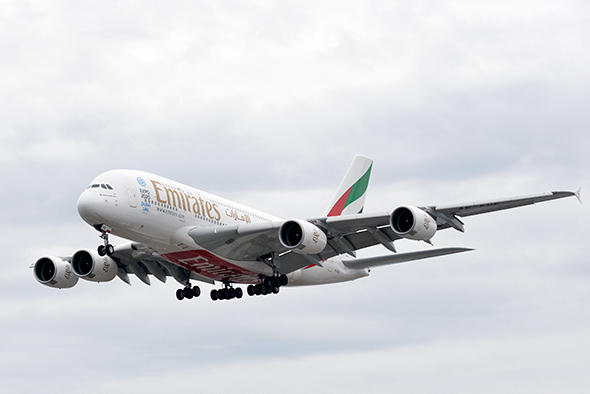 On the last trip I made to the aiport, I headed to the foot of Runway 23 in wait of the Emirates Airbus A380, the largest passenger plane in the world. Thanks to a helpful tip from one of our Instagram followers, I knew that the Dubai to Toronto flight typically arrives around 3:30 p.m. on Wednesdays, so I arrived about 30 minutes early to get prepared. 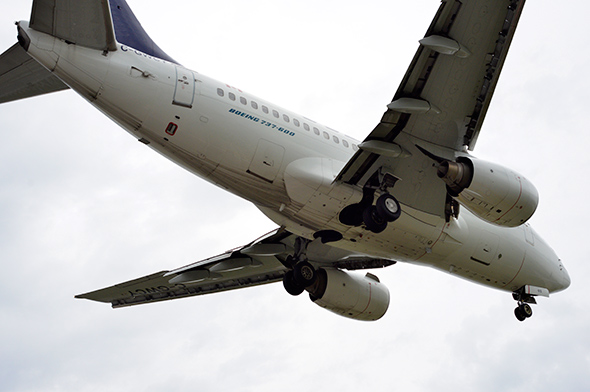 After surveying the activity on the runway, however, it quickly became apparent that air traffic controllers had made the decision to land planes on the other side of the runway for the time being. This is a common decision made based on a number of factors, the most obvious of which is the direction of the wind. 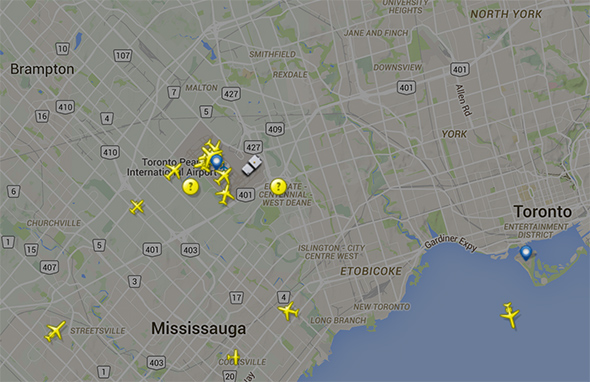 Had I checked Flightradar24 on the way to airport I would have realized this earlier, but now I was in a rush to circle the airport to get to the other side, which is designated Runway 05. Unfortunately, the viewpoint from Dixie Rd. isn't as dramatic as it is from Airport Rd., but I was just happy that I made it around in time. Always check the live tracker to determine what direction the traffic is coming from. 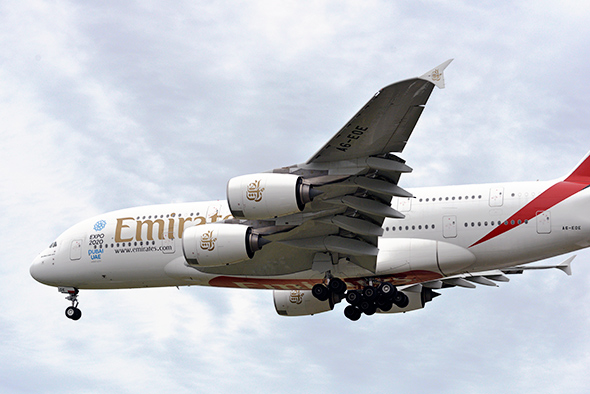 The massive Airbus arrived about three minutes after I parked on Director Gate and scrambled to get into position. There were a handful of other plane spotters set up here, some of whom had brought portable chairs with them to take in the day's theatrics. Using a telephoto lens, I tracked the huge plane as it approached. 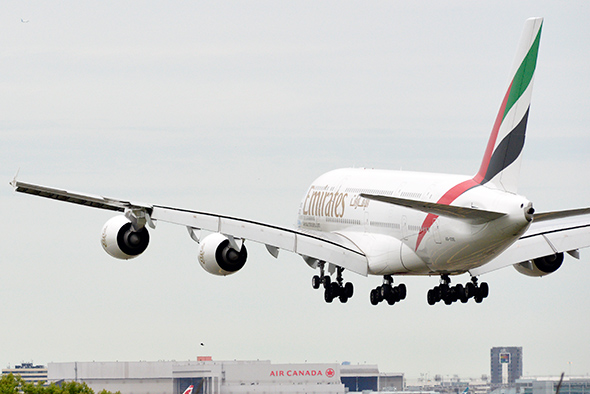 It's difficult to explain just how monstrous the A380 is as it roars over head. For a few seconds it's spellbinding, and then the noise level drops and you watch the giant object softly touch the runway as smoke erupts from its wheels making contact with the tarmac. It doesn't quite happen in the blink of an eye, but the speed of it all gets you wanting more. 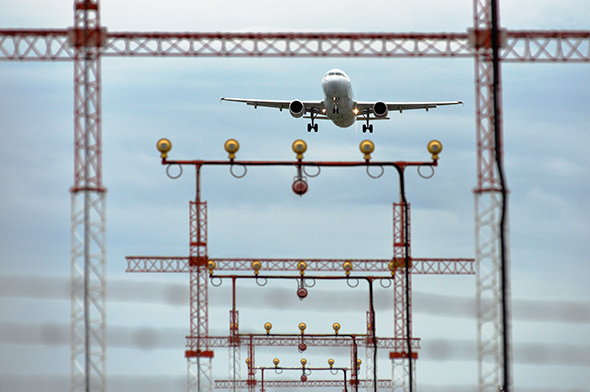 I stayed on Dixie Rd. and watched another 10 or 12 planes land before making the obligatory stop at Zet's to fuel up for another round of plane spotting. Curving around Convair Dr., I encountered other plane spotters taking in the action on runways 06 L/R. This is a trickier spot to stop, as there's no parking and airport security often asks people to leave. 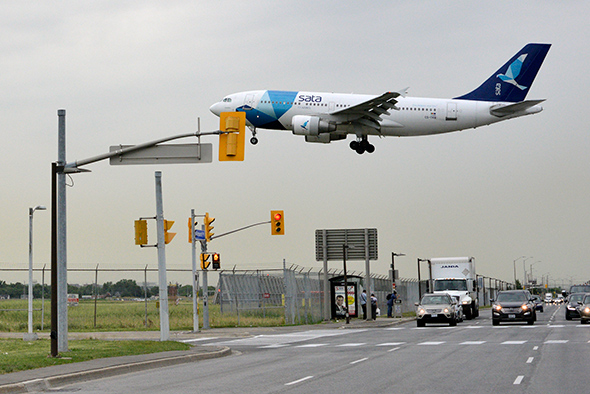 By the time I finished eating, the planes were landing on Runway 23 again. It's amazing to watch them queue up three at a time way in the distance and wait for them to come screaming across a traffic-clogged Airport Rd. at rush hour.

You can also watch planes land from the parking lot at Hooters on Carlingview, which gives a view of activity on Runway 24R, but for my money the best perch is at the foot of 23. The perspective here provides a better sense of just how gigantic and fast these planes are moving. Transport trucks are temporarily dwarfed as the heaviest planes descend. 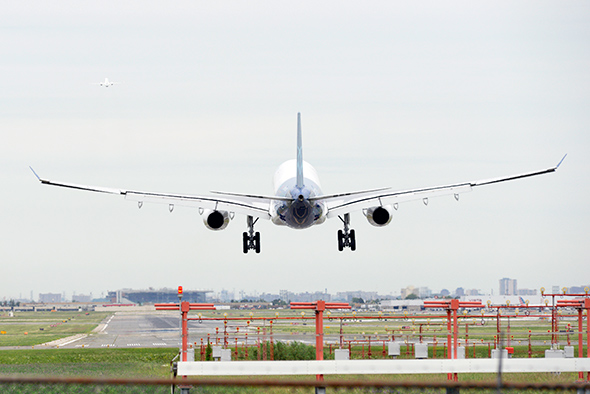 Plane spotting isn't the type of thing that most of us would want to do on a regular basis, but if you're already headed to the airport, it's worth a detour to check out the action, even if you don't get to witness the most massive jets take-off and land.

Somehow you feel like you're in on a secret when you smile as the first one passes overhead.