The better way thinks it's found a better design for its maps and signs. After several months of work, the TTC is unveiling a set of new design standards for subway and surface transit stops later today in an attempt to bring "simplicity and clarity" where there was once clutter and confusion.

The "New Wayfinding Standards" document also - tantalizingly - shows what the subway map will look like with the addition of the Eglinton-Scarborough Crosstown, the Spadina line extension, Sheppard LRT, and Finch West LRT. 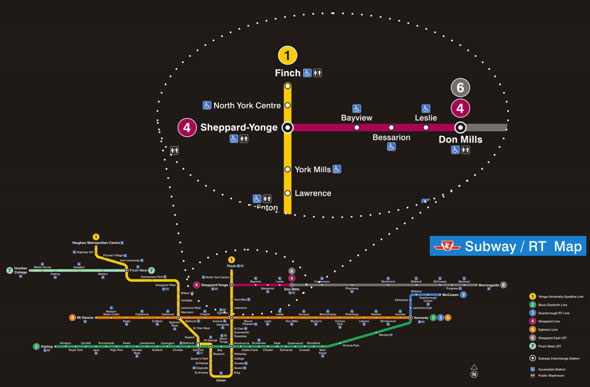 In the presentation, the TTC offers two alternatives for the system map: one based on colour and the other with lines that vary in thickness to represent more frequent service. Both dispense with unnecessary geographic features like side roads and smooth out the bus routes for easier reading.

The classic TTC font, most famously used to render subway station names in tile, could be set for a comeback too. TTC staff recommend using the font on the system map, at station entrances, fare booths, and track level signage. 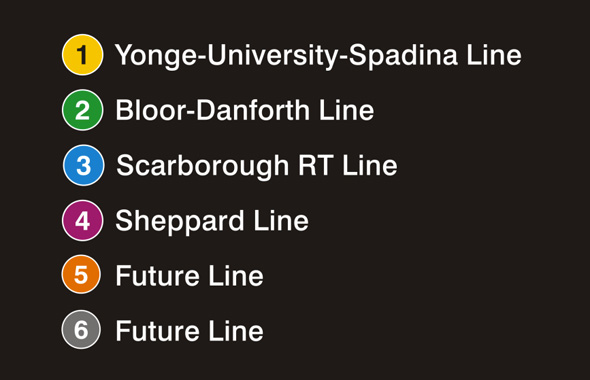 The overhaul continues the theme established by the release of new subway symbols. If approved by the board, the TTC plans to drop the long-standing names of its underground lines and adopt a system of numbers instead. The Yonge-University-Spadina line would become line "1," Bloor-Danforth "2," Scarborough RT "3," and Sheppard "4." New lines, like the Eglinton-Scarborough Crosstown, would be given numbers as they are completed.

In future, when the Scarborough RT becomes an extension of the Bloor-Danforth subway (insert the appropriate caveats here,) route 3 could be shifted to the Downtown Relief Line, or whatever it's being called today, hopefully depoliticizing the name a little. 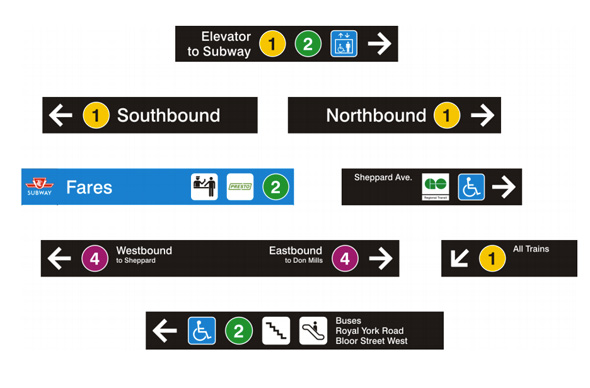 The TTC provided a hint at the new look back in February when it unveiled a trial new look for bus stop poles on the 94 Wellesley route. The trial shelter map followed the classic wiring diagram look from the London Underground. 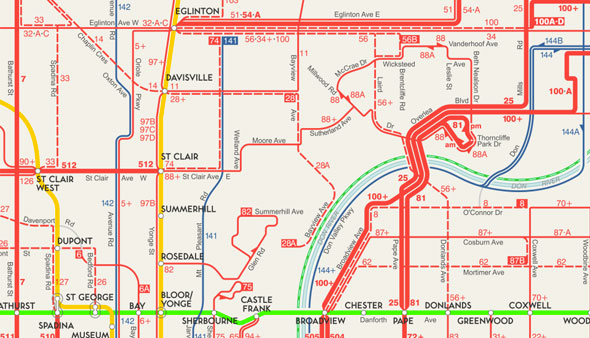 Riders reported a positive reaction, the TTC says, but the some of the elements were "not universally appropriate." 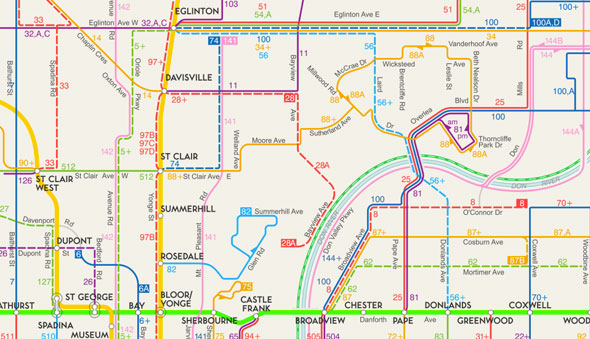 The signage and wayfinding document, prepared in-house, was one of the promises outlined in the TTC customer charter, unveiled by CEO Andy Byford in February. The "simple, non-fussy approach" strips away much of the clutter and mismatched design standards for a "clean and direct" approach.

Bloor-Yonge and St. George will be the first stations to take advantage of the visual tweaks in the new year. In the meantime, the TTC is stressing that the changes do have a purpose beyond making Toronto's public transit more visually appealing. The presentation calls it a "return to roots."

TTC head of customer service Chris Upfold said the money for the Bloor-Yonge and St. George makeovers will come out of the existing advertising budget. The cost of installing the signs and maps throughout the system isn't yet known, he said.

Do you like the direction the TTC is taking with its new signage? Do numbers work better than names? Will this be a step forward? 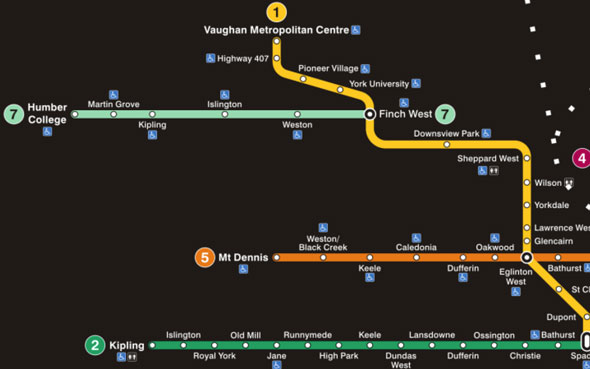 Close-up of the new LRT lines on the subway map. 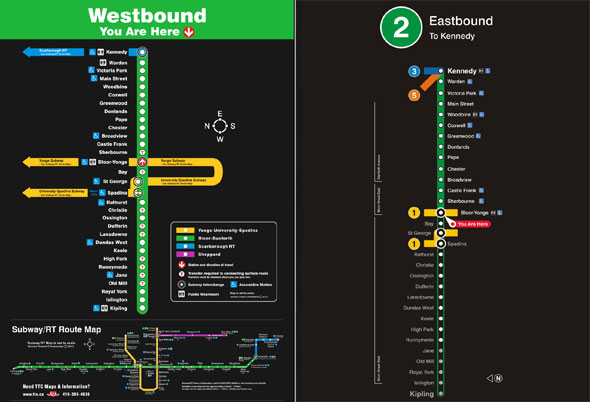 A comparison of the current and proposed
platform route map. 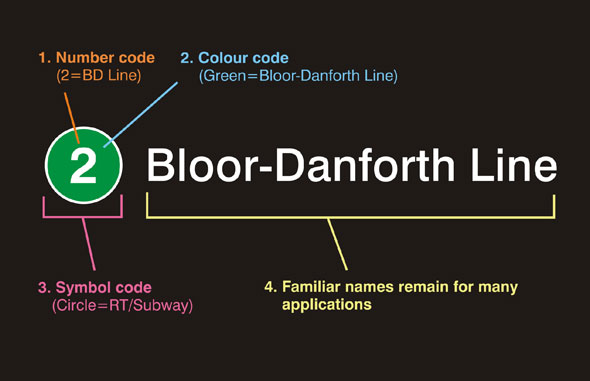 Breakdown of how the new route numbers will be used with the existing subway names. 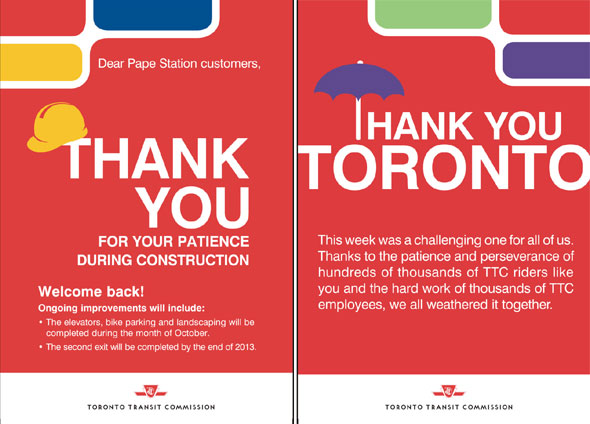 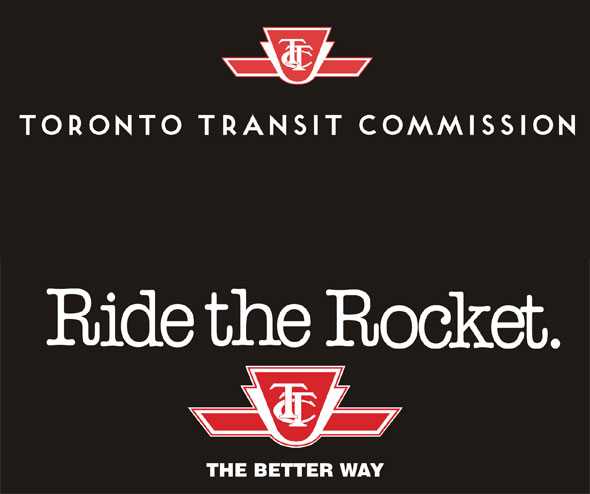 New logo with classic font minus the "Ride the Rocket" and "Better Way" slogans. 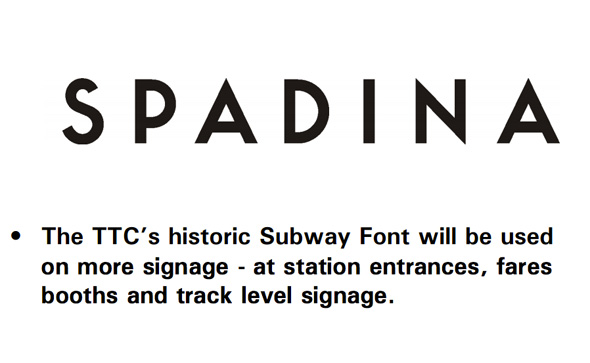