The top 21 exhibits to see at Nuit Blanche Toronto 2019

Nuit Blanche 2019 in Toronto is about to transform the city once again into an all-night arts extravaganza. The concept of change and cycles will play a big part in this year’s theme, Continuum.

Last year’s Nuit Blanche might have been one of the best so far. It marked the festival’s first foray into Scarborough with subway station installations, massive projections onto the Scarborough Civic Centre, and one of the best turnouts in the event’s history.

#Toronto stayed up all night for this year's Nuit Blanche #nbTO18 pic.twitter.com/OWYJKfh7J6

It might be hard to beat, but there’s still plenty of exciting stuff expected from Continuum. Expect lots of glowing orbs scattered around the city, plus it’s Danforth East’s time to shine: for the first time ever, the stretch between Greenwood and Coxwell stations will become an official Nuit neighbourhood.

If you’re planning on staying out late into the night on October 5, make sure to dress for some nippy weather. It's expected to drop to a crisp low of 11 C overnight—typical weather for a Nuit Blanche weekend.

Here are my picks for must-see exhibits to check out at Nuit Blanche 2019 in Toronto.

Toronto's art space beneath The Gardiner will be wrapped in vast amounts of neon yellow hazard tape, transforming The Bentway into a fluttering display that visitors can stand inside.

Life of the Earth

Director X returns with a sequel to his acclaimed installation Death of the Sun, which mesmerized visitors at Nathan Phillips Square in 2016, with this multimedia installation at the Ontario Science Centre.

Get lost in the MaRS atrium with an immersive exhibit from Fezz Stenton and Daniel Lanois, where nature meets the urban landscape with huge inflatable sculptures, projection mapping, and a massive glowing orb. 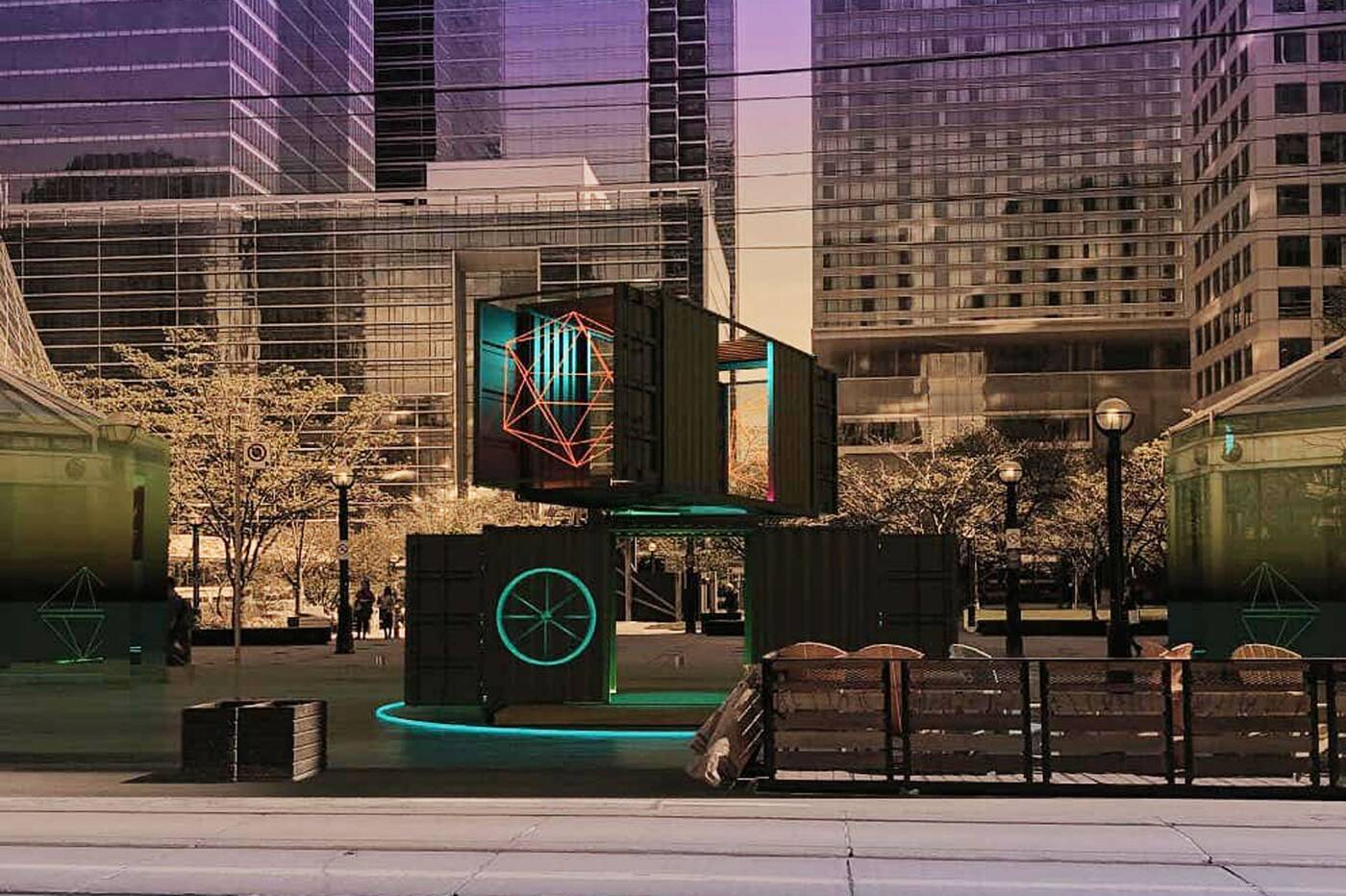 A foggy river made up of blue light will take over Christie Pits to pay homage to the Garrison Creek, which runs beneath the park, plus all the other unknown artifacts buried beneath the city.

Everyone Wants a Free Baby

Studio F Minus (the same people behind the St. Clair glitter tunnel) brings an hilarious exhibit to the Fort York park, where a cannon shoots out a parachuting “baby” out into the crowd every 20 minutes, Oprah-style.

The intersection of Sterling Road and Perth Avenue will be wrapped in 75 metres of handmade rope, made from donated textiles from local residents.

Zodiac and natal chart lovers should head to David Pecaut Square to visit this pair of shipping containers-turned-cosmological wonders from Javid Jah that explores celestial bodies and sacred geometry.

Anatomy of an Abattoir

This installation transforms an abandoned slaughter house on Tecumseth Street into a ghostly exhibit of debris and old equipment, with pieces coated in latex rubber and placed around the courtyard.

Stand in awe under this illuminated sphere suspended under the Gardiner Expressway. This installation from Nathan Whitford can be found at Dan Leckie Way and Housey St. 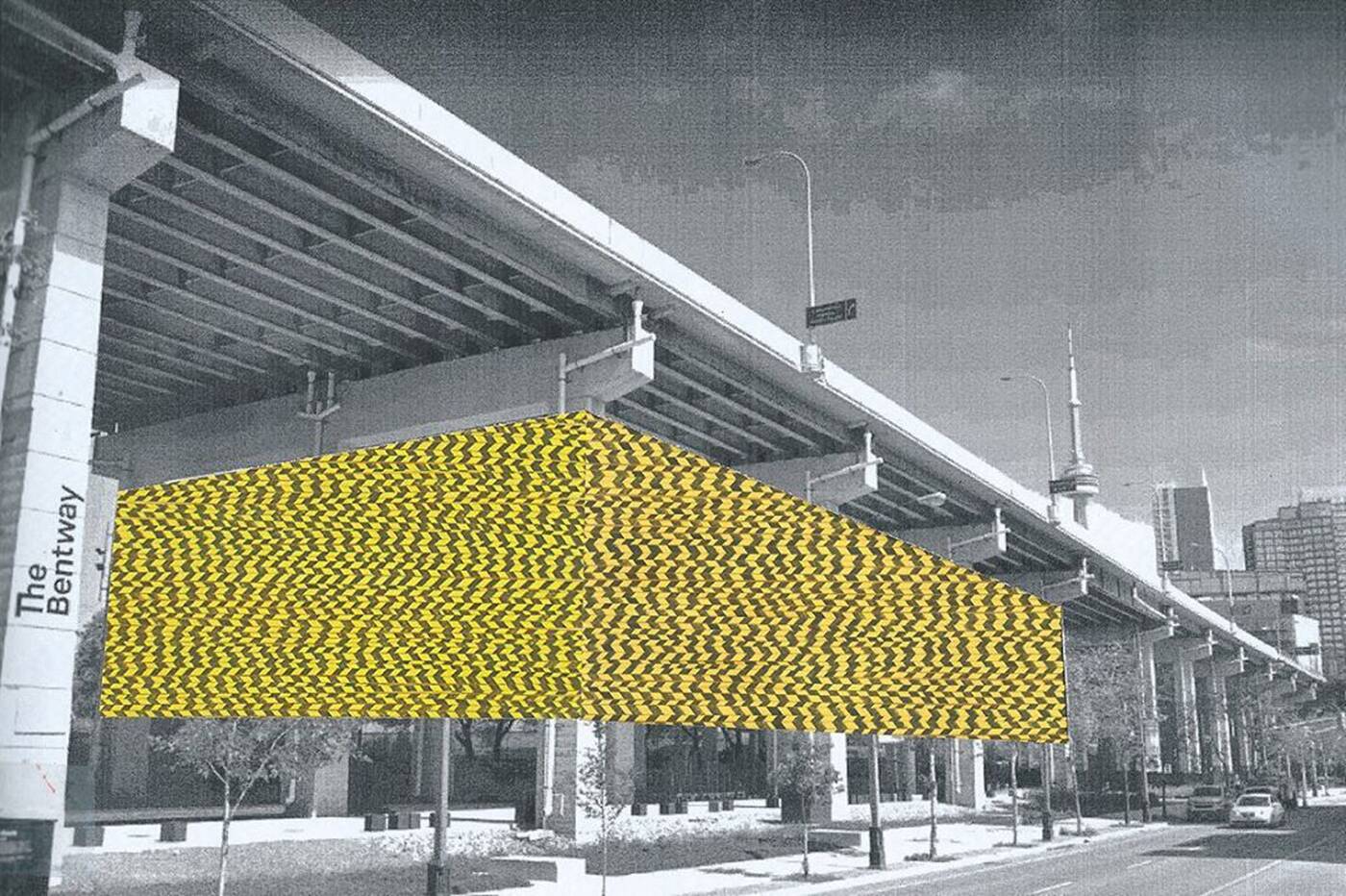 Hazard tape will surround The Bentway for Hoarding. Photo via Art Spin Toronto.

Where Are We Now?

Alexis Eke brings her immediately recognizable portraits of Black women to the Scarborough Town Centre with this large display of art.

Zen out beside a 30-foot moon orb by American artist Daniel Arsham at Nathan Phillips Square. Inspired by a Japanese garden, there’ll be Zen-style raking of the pink sand taking place all night, accompanied by an original soundscape by Toronto crooner Charlotte Day Wilson.

Peace to the Past, Reach for the Future

In celebration of The Raptors 25th anniversary, sculptor Esmaa Mahamoud and artistic director Bryan Espiritu of the Legend’s League pay homage to our Championship winning team, mental health, and concepts of Black masculinity with an 18-foot sculpture by Old City Hall.

As always, the Eaton Centre Bridge will light up all night. This year's will be a depiction of the Northern Lights from Anishnaabe artist Bekah Brown, with ceremonial jingle dances performed at sunset and sunrise to honour missing and murdered Indigenous women.

Hanging bells set the backdrop for this continuously-shifting exhibit, which will include performances centred around beauty, rituals, and community. String fresh jasmine garlands together and watch the scene unfold on the lower level of Scarborough Town Centre. 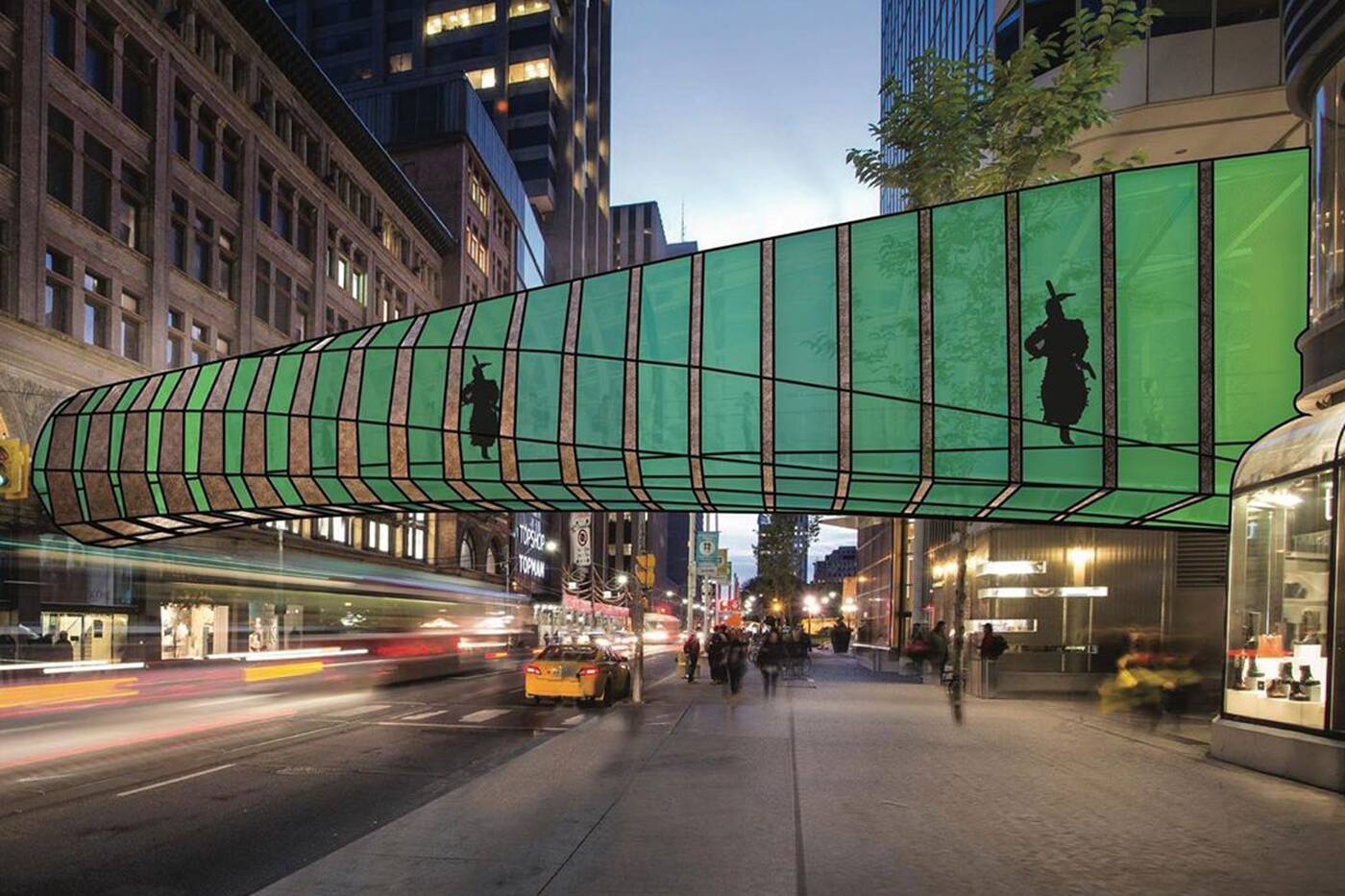 Chasing Red honours missing and murdered Indigenous women with lights and performances at sunset and sunrise on the Eaton Centre Bridge. Photo via Bekah Brown.

A 25-foot-tall glacier by Ghost Atelier will sit at Yonge-Dundas Square all night long to remind visitors about the diminishing ice caps and the future of mankind.

Step into this human-sized kaleidoscope from Alejandro Figueroa, which explores ideas of identity and validation in the social media age. This exhibit at Drake One Fifty will, unsurprisingly, make a great addition to your Instagram feed.

Follow this instructional video on an immersive dance floor at the Bata Shoe Museum basement, dedicated to “first-time dancers, awkward dancer, and non-dancers.”

A collaborative outdoor mural-making exhibit hits the library at Scarborough Civic Centre with a slowly-rotating cylindrical canvas that allows visitors to paint over each other’s work in a cycle of creation and destruction.

Eulogy for the Coffin Factory

Twenty-four different coffins will line the south side of Niagara Street by Tecumseth Street in honour of the historic Coffin Factory, which is slated to become a pair of new condos. The caskets have been designed by artists who have been evicted from the building.

Nuit Blanche is a huge photo opp, so why not tag your photos on Instagram for a chance to win prizes? The contest starts when Nuit Blanche does at 7:00 p.m. on Saturday October 5 and the deadline to submit is the end of day October 6.

We'll then narrow the entries to ten finalists and put the winners to a vote from October 7 to October 13 after which the winners will be announced.