Another year of all-night arts revelry has come and gone, and those of us who got some sleep can now reflect on the installations at this weekend's Nuit Blanche.

This edition of the arts fest might have been the best one to date, for the sole reason that Nuit Blanche expanded to Scarborough for the first time ever in 13 years, and with some of the most engaging installations of the entire event to boot.

#Toronto stayed up all night for this year's Nuit Blanche #nbTO18 pic.twitter.com/OWYJKfh7J6 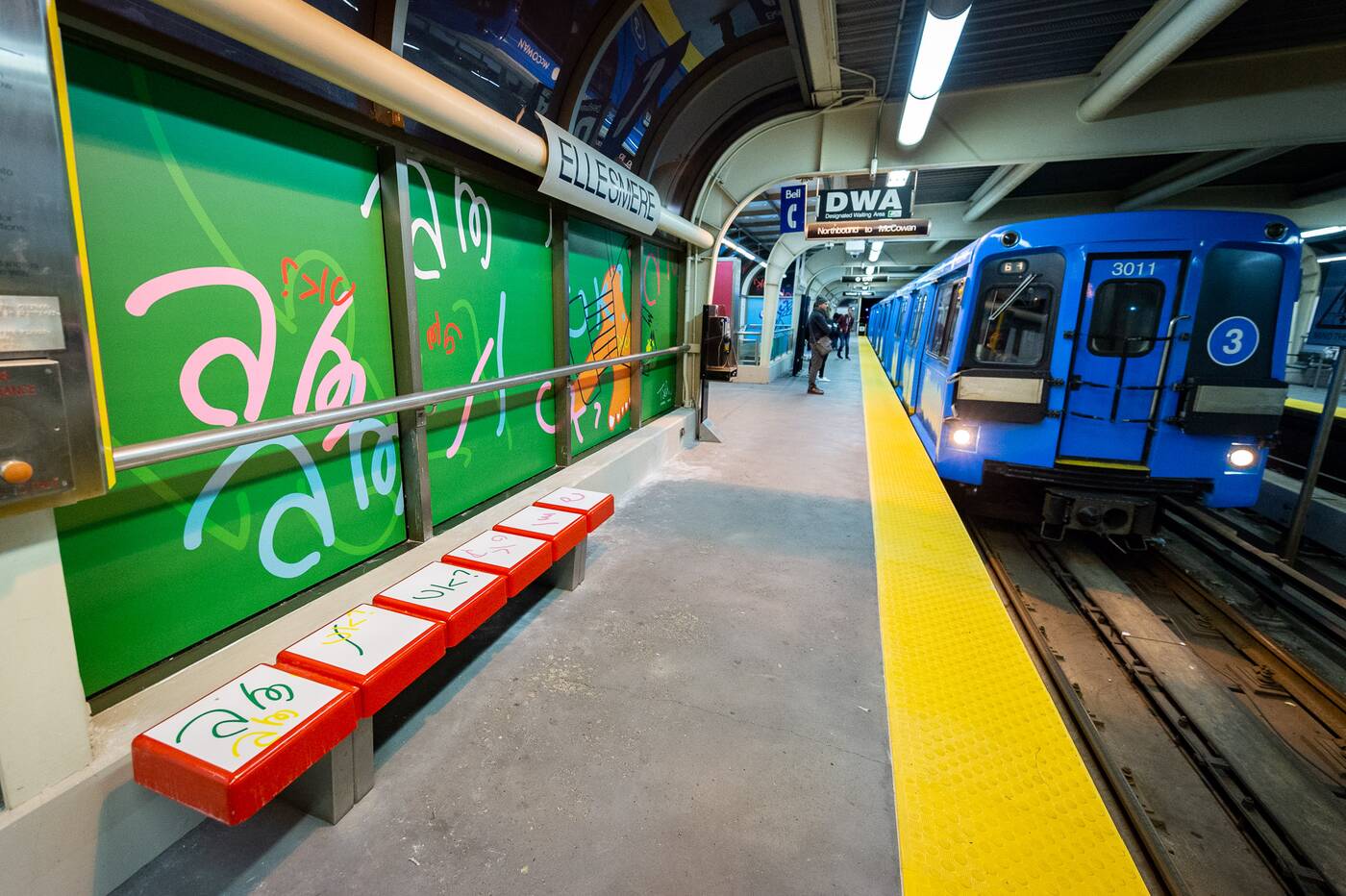 Turnout was in the thousands, in part due to free subway entrance at the subway stops along the Scarborough RT—which all (except McCowan) featured art from artists like Javid Jah and Shalak Attack. 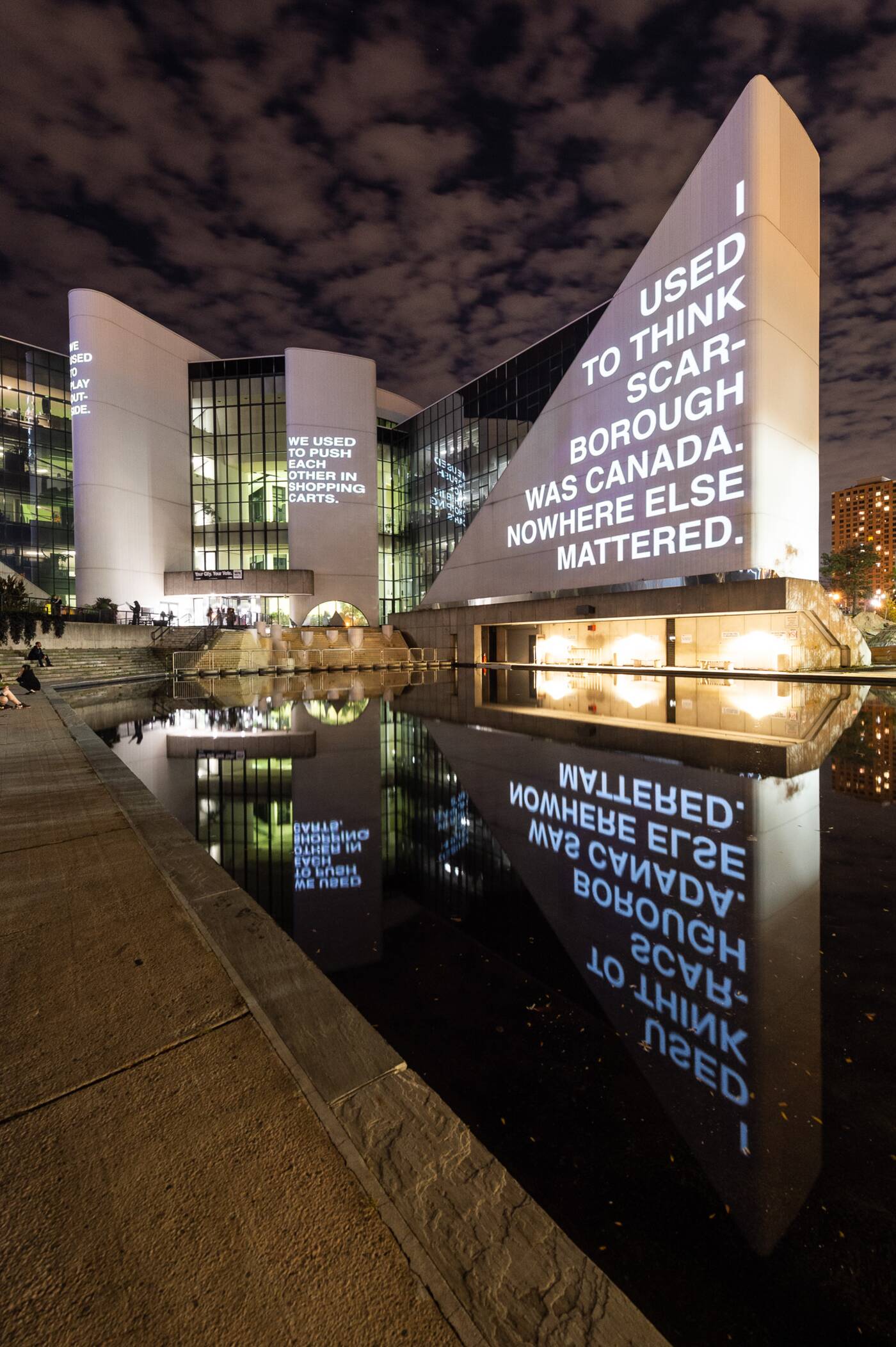 Everything I Wanted To Tell You at the Scarborough Civic Centre. Photo by Matt Forysthe.

Hiba Abdallah's installation "Everything I Wanted To Tell You" projected 250 excerpts of personal stories from Scarborough residents onto the almost 30-metre walls of the Scarborough Civic Centre. 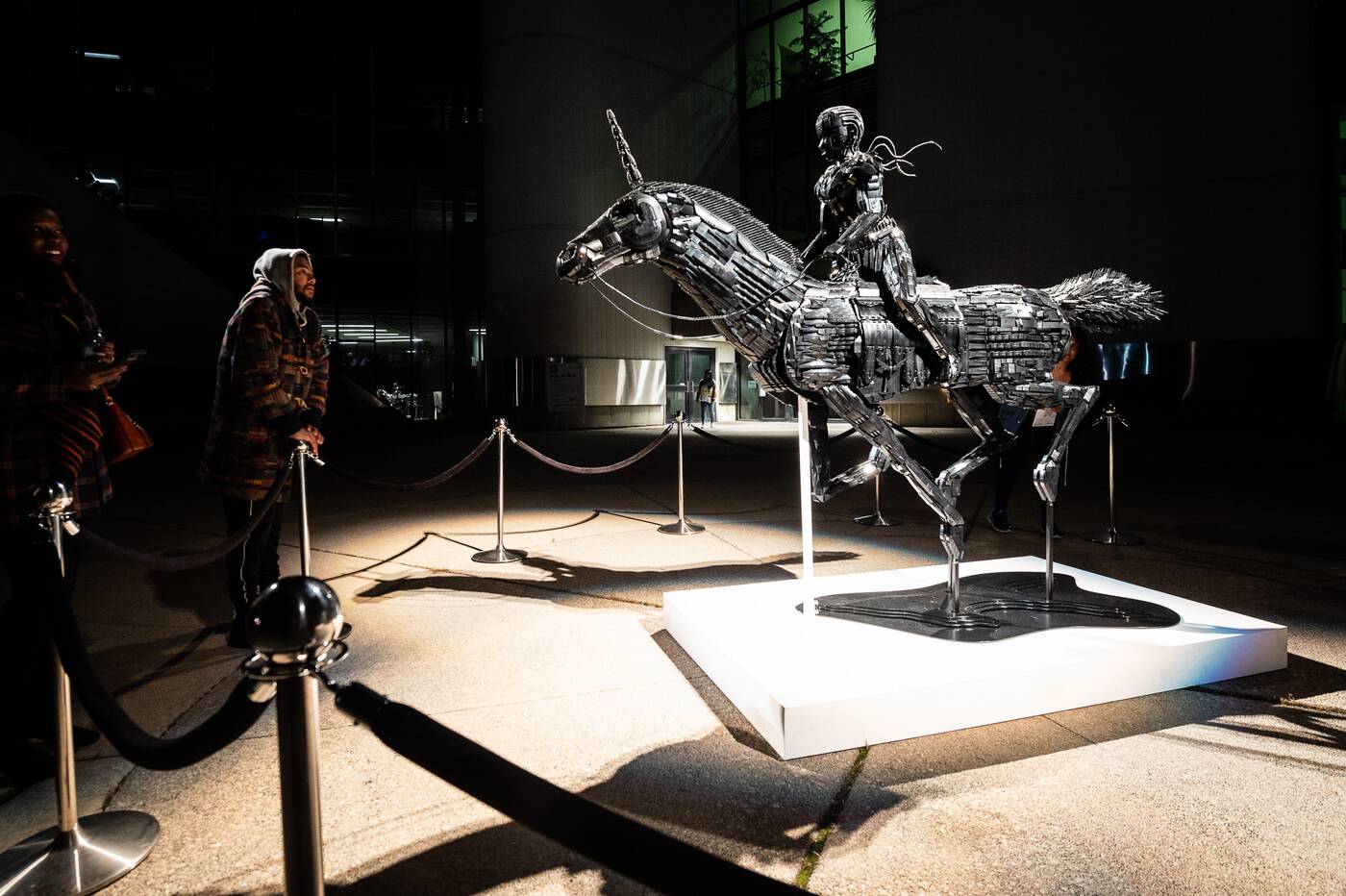 Cavalier Noir, made in collaboration with Toronto artists Ekow Nimako and Director X of music video fame from 80,000 lego pieces, was an homage to black Canadians in the Civic Centre.

this the scene rn for @rise_edt’s nuit blanche instalment. I hope y’all understand the importance of this and I don’t have to explain pic.twitter.com/r6FnzwL13N

At the loading dock of the centre, performances took place all night including poetry and live performances courtesy of RISE Edutainment, while inside, Indigenous drummers and spoken word artists performed for "Filibuster." 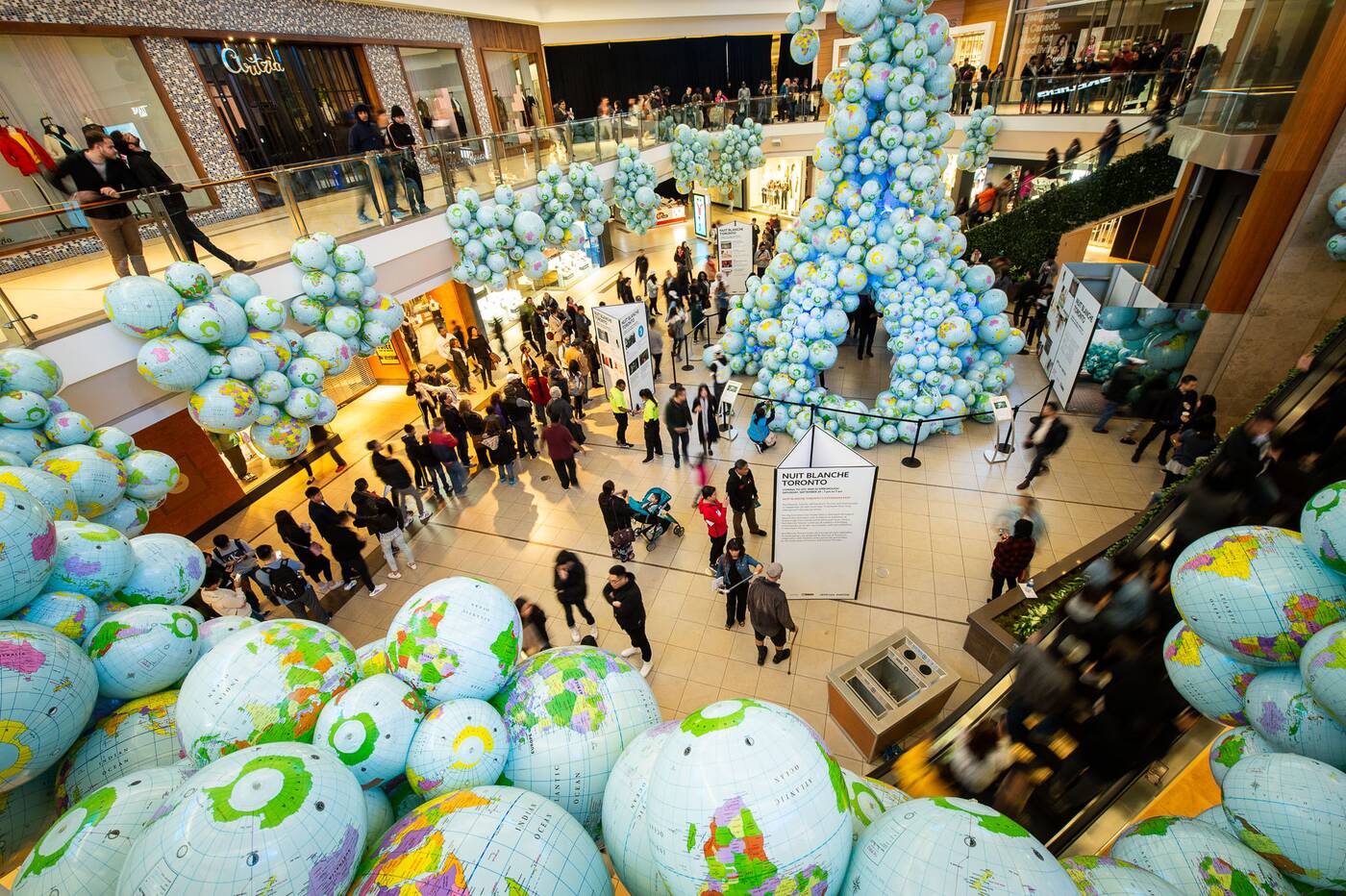 Walk Among Worlds at Nuit Blanche. Photo by Matt Forsythe.

Visitors who hit up Scarborough Town Centre saw the mall transform with "Walk Among Worlds," an installation made of 3,000 globes by Spanish artist Máximo González. 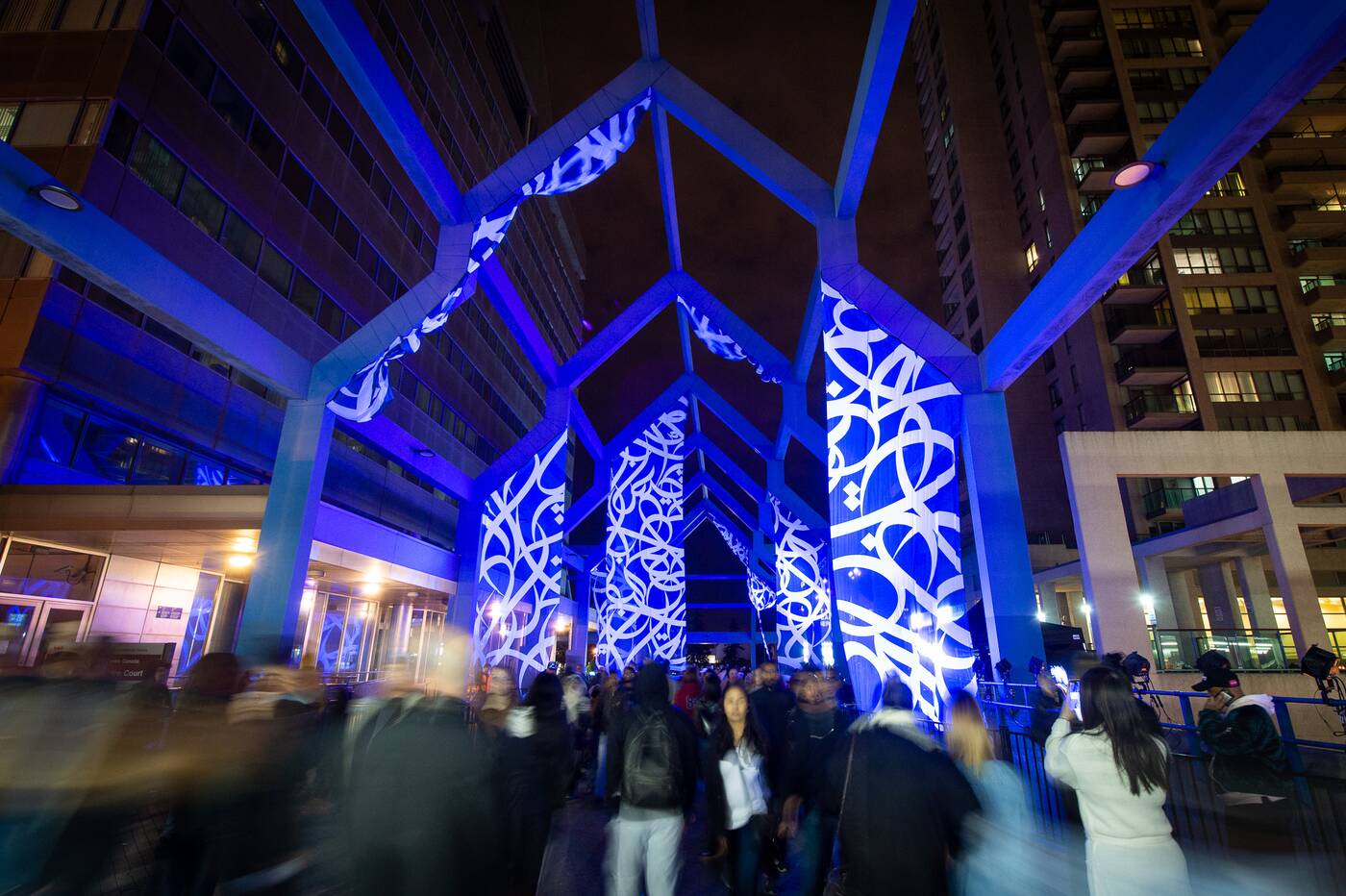 Mirrors of Babel by eL Seed. Photo by Matt Forsythe.

Bridging the Scarborough installations with the downtown core was a multi-part installation by French-Tunisian artist eL Seed, based on an Arabic translation of a two-part poem by Mohawk poet E. Pauline Johnson. 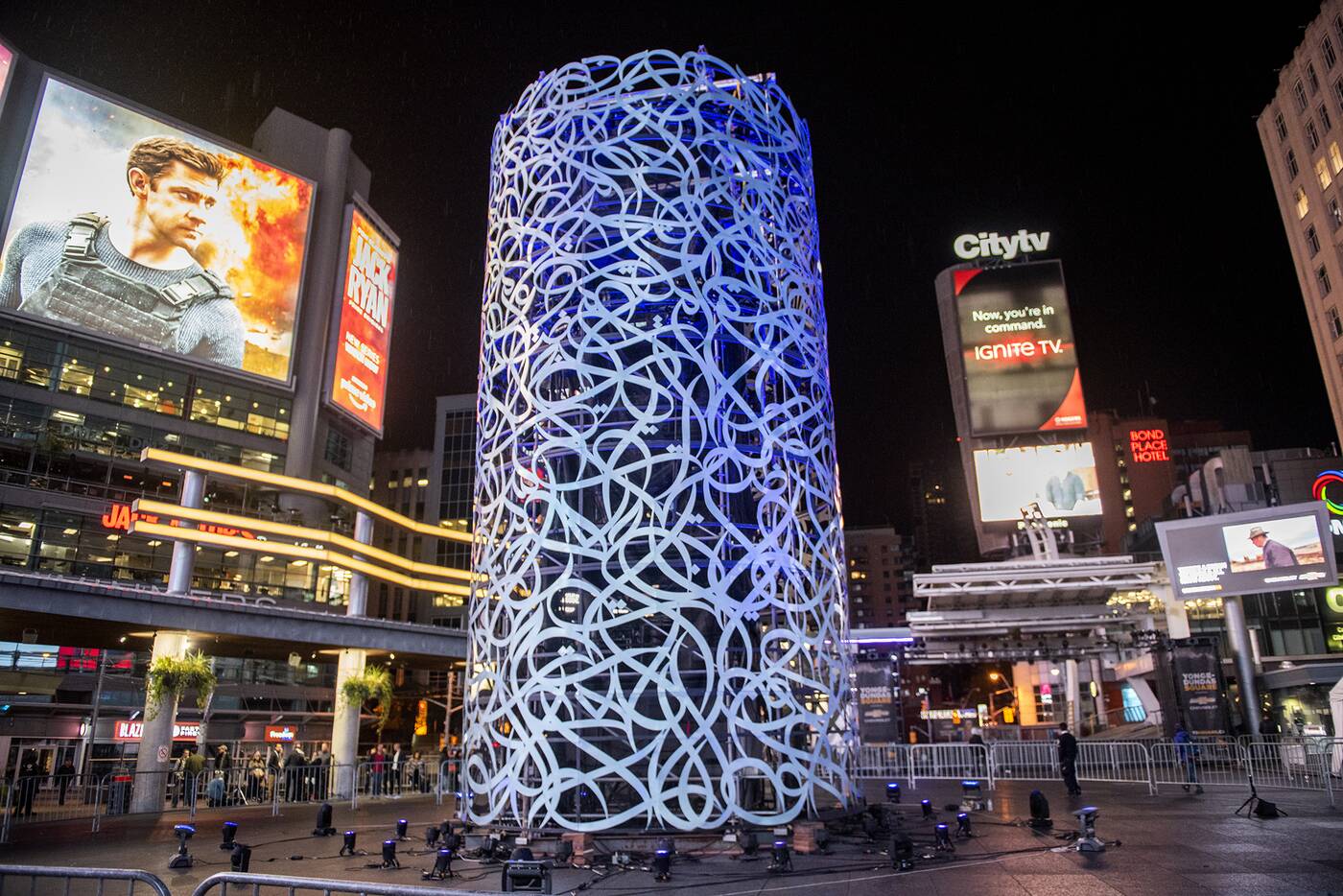 Land To Be by eL Seed. Photo by Hector Vasquez.

The 13-metre-tall tower "Land to Be" at Yonge-Dundas Square corresponded with another structure and subway station art "Mirrors of Babel" by various artists in Scarborough, in reflection of the dialogue between Indigenous people and Canadian immigrants.

This dance performance is on a 1 hour loop all night long inside the Eaton Centre skybridge for Nuit Blanche #nbto #nbto18 #Toronto #27 pic.twitter.com/wRmrEYViQi

Back in the downtown core, there was the usual bustle at main event centres, along with some new activations like Continuum, which utilised the bridge at the Eaton Centre for a light show and live circus performances.

In Nathan Philips Square, Hendrick's Gin brought its epic hot air balloon back for a second year, allowing some lucky guests a ride on the steampunk-themed attraction. 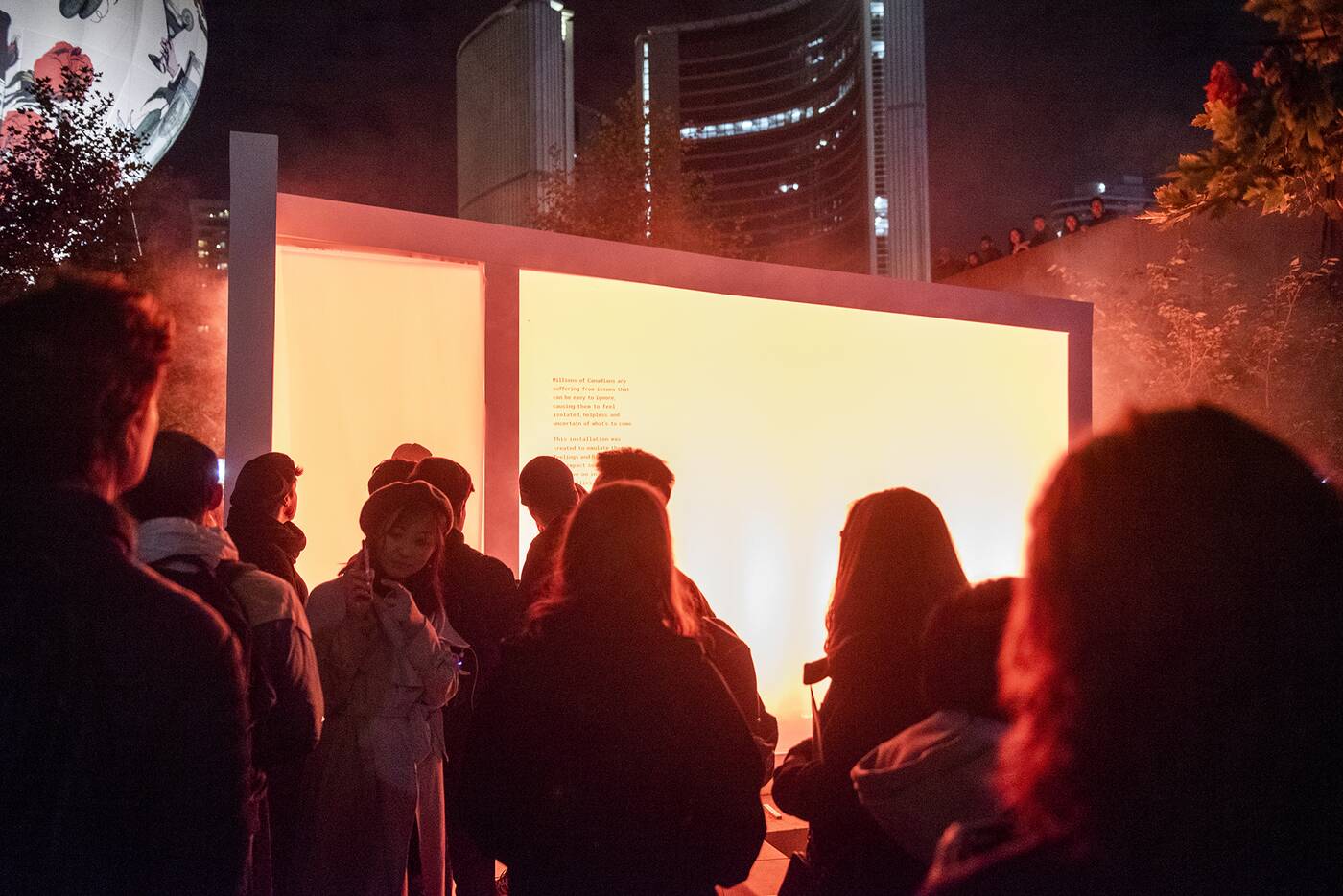 "Unignorable" by United Way drew crowds like moths to flame with its giant orange wall, which was a custom colour developed by the Pantone Color Institute just for the charity. 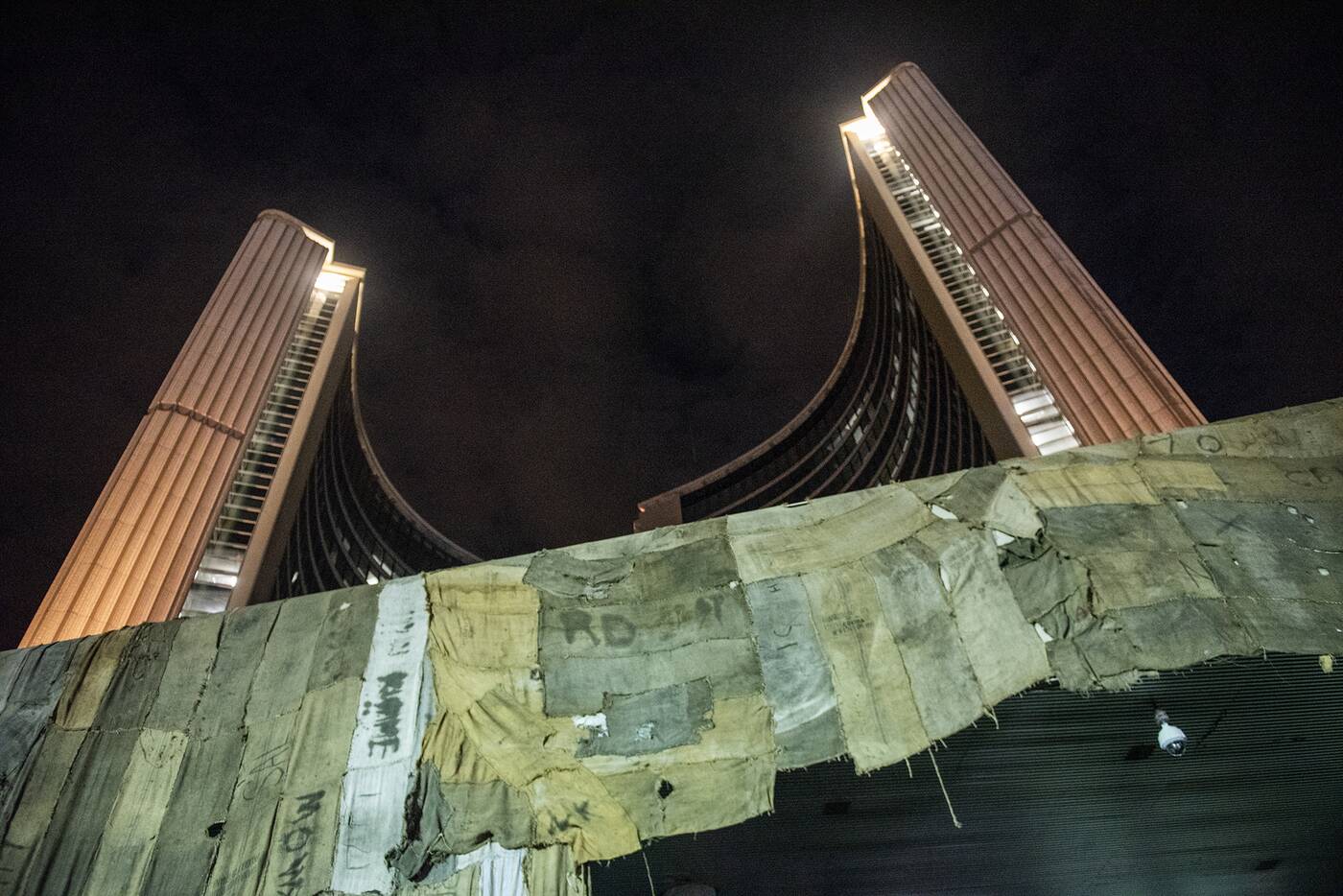 City Hall looked drab with its massive patchwork of jute fabrics, as part of "Radical Histories 2012-2018" by Ibrahim Maham highlighted the economic state of African markets and their relationship with international demand. 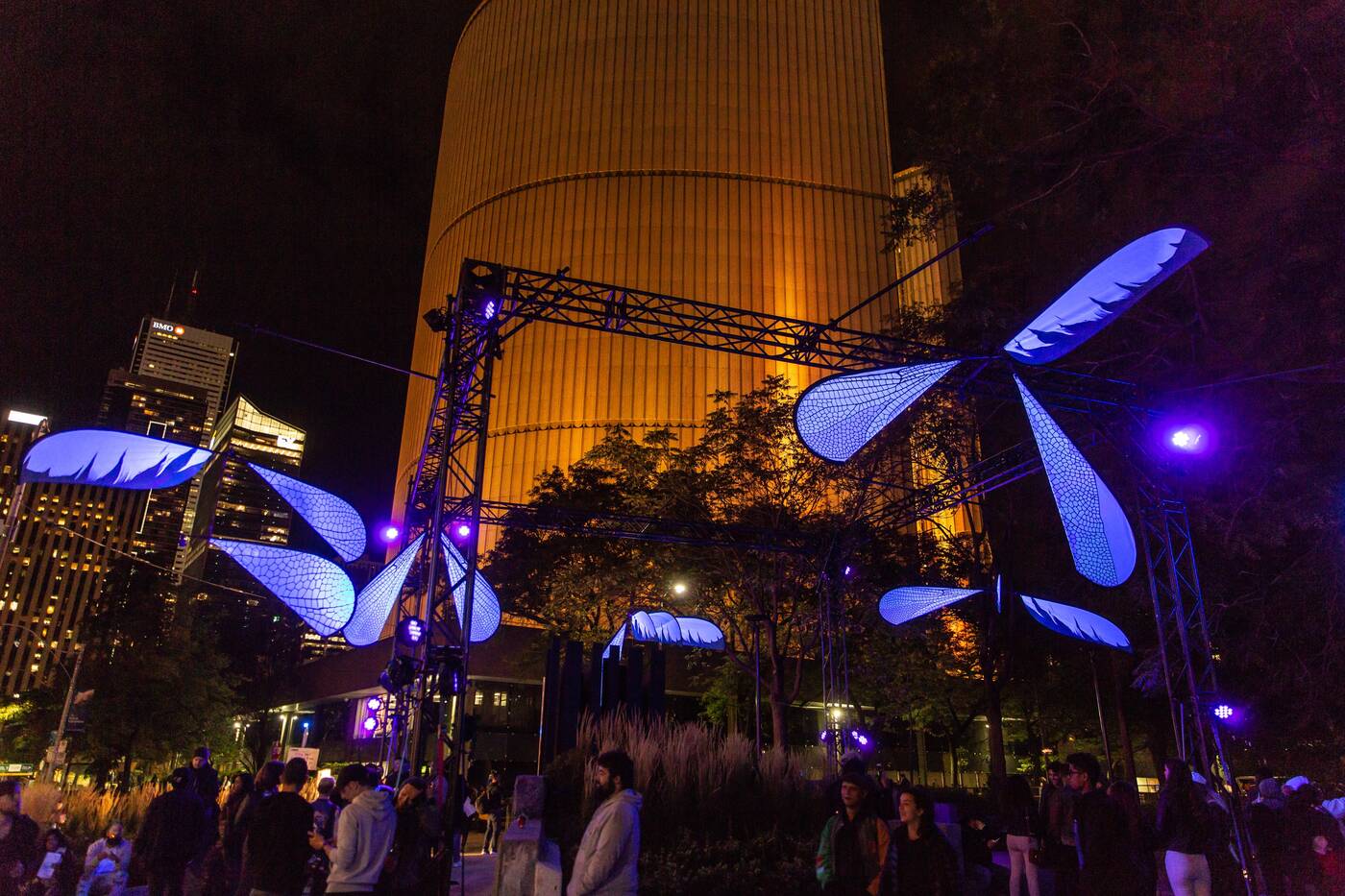 Do Angels Exist lit up the night. Photo by Andrew Williamson.

A dance party has broken out in the middle of Bay St in #Toronto #nbto18 #NuitBlanche 🕺🏻💃🏼 pic.twitter.com/F1rbxwl5lT

The row of cop cars barricading the dance party at Bay and Richmond for Brendan Fernandes' "On Flashing Lights" was an interesting and uneasy tying-in of law enforcement with queer and radicalized communities.

And Black Lives Matter was out showing some love with free hugs at Queen and York. 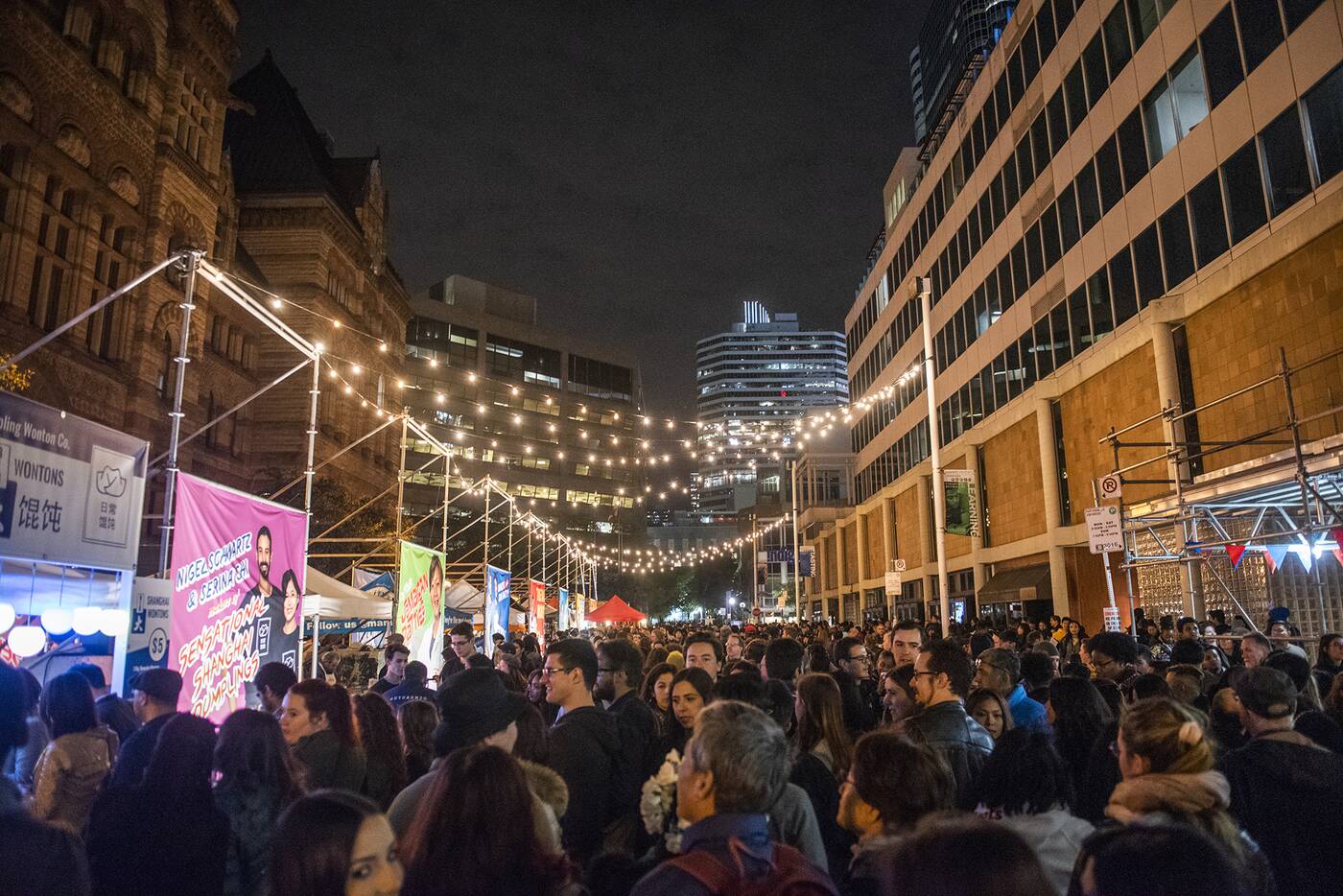 While there were plenty of food trucks and late night eats available, including the fried chicken pop up outside of Henderson Brewing on Sterling Road where the newly opened MOCA also hosted an exhibit, a big highlight was the International Dumpling Festival by Ken Lum.

Lining the street between Eaton Centre and Old City Hall, six vendors doled out their versions of dumplings in celebration of doughy pockets from all around the world, which ranged from Jamaican patties to pierogies.