After years upon years of hearing about how Toronto has grown into a leading tech capital, replete with fancy forthcoming HQs from all of the American biggies and global giants, we finally got to see one of said fancy new offices open its doors. And this joint did not disappoint.

Microsoft Canada unveiled its new headquarters in downtown Toronto on Tuesday, inviting blogTO and other outlets inside for a sneak peek at the kind of office most employees would be thrilled to leave their beds for in the morning.

If the free café with on-site baristas doesn't get you jazzed, the views certainly will — all 270 degrees of them on the 43rd floor of the brand new CIBC SQUARE complex in Toronto's bustling South Core. 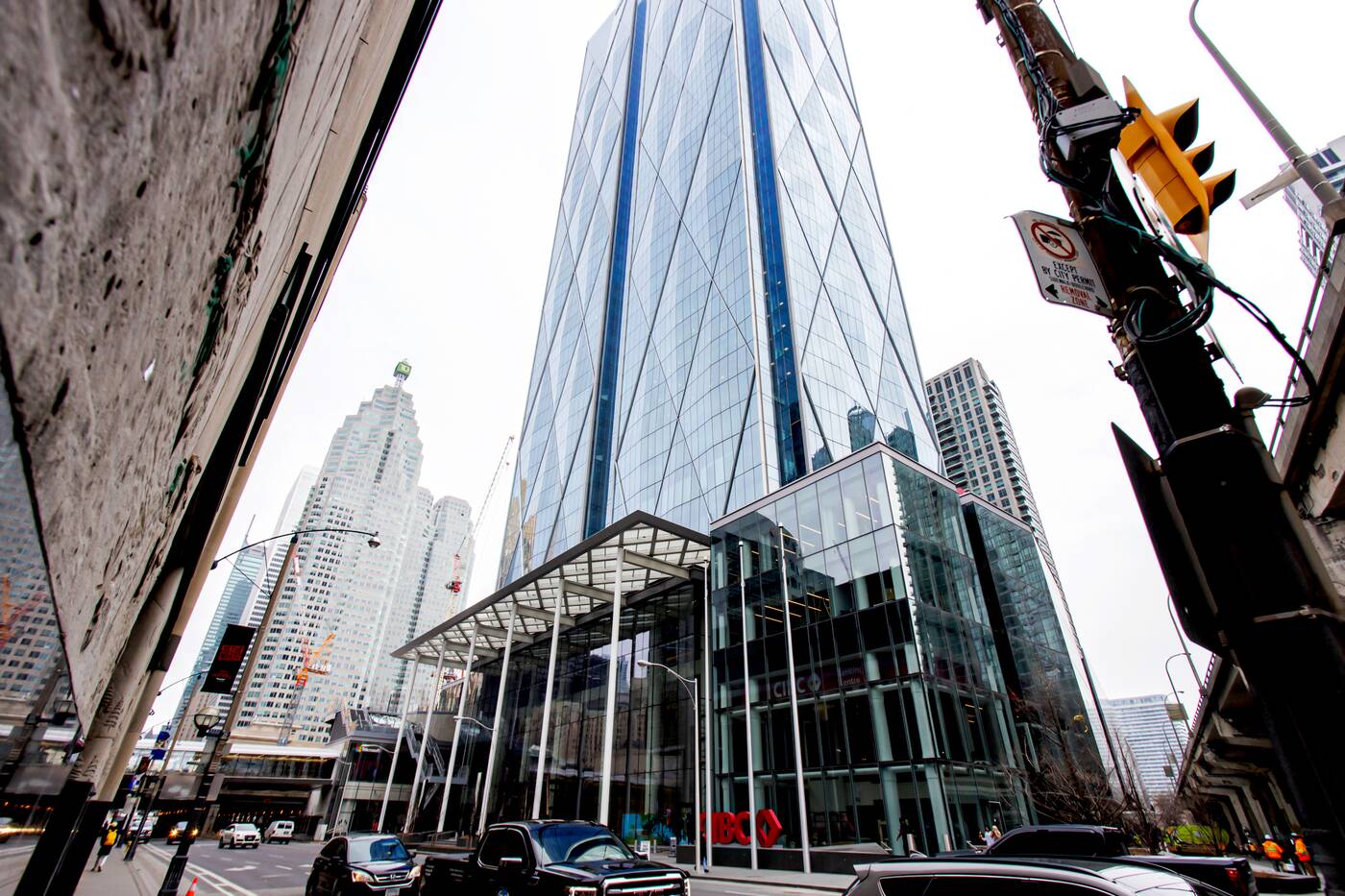 Microsoft first announced that it would be opening a new office inside CIBC Square back in September 2018 — one of the first among many tech juggernauts to announce a major expansion into Toronto over the past four years (or even past four months.)

Initially slated to open in 2020, before the dark times, Microsoft's new office came with the promise of at least 500 new jobs.

That 132,000 square foot state-of-the-art office opened today at 81 Bay Street, not with 500 new employees, but with 2,500 — five times the company's initial estimate of jobs it would create. 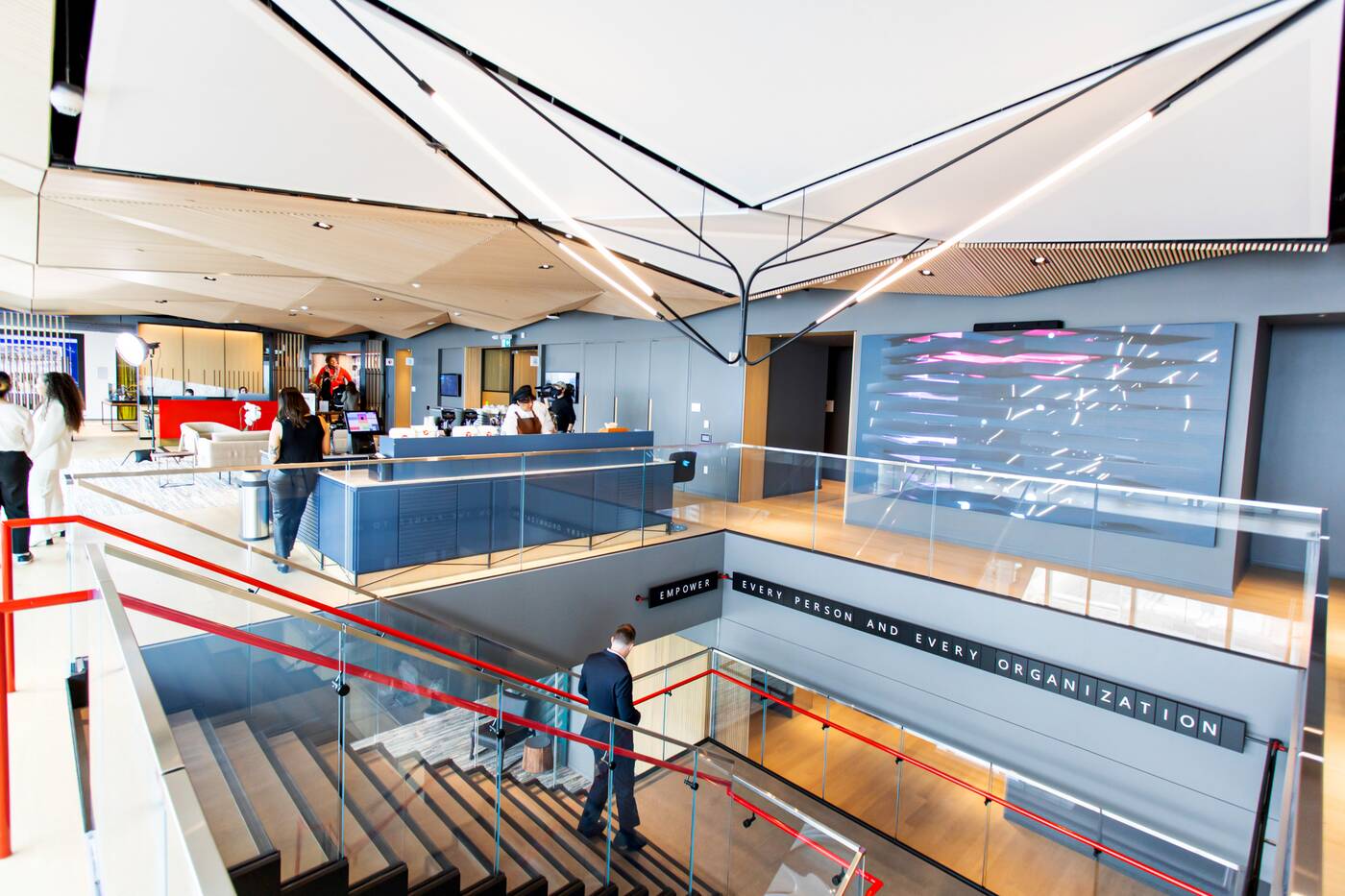 A new Economic Impact Study from Ernst and Young on behalf of Microsoft found that the Seattle-based multinational technology corporation (est. 1975) "accounts for nearly 300,000 Canadian jobs and contributes more than $37 billion to Canada's GDP."

Microsoft has been in Canada since 1985 and employs about 5,000 people across the country. The company donated more than $125 million in cash, software and technology services to non-profits in 2021 alone and is supporting "30 projects that are currently valued at $190 million" through a collaboration with the Digital Technology Supercluster.

You can read more about the money and economic contribution of Microsoft in Canada here. For now, let's look at the rest of this sweet office. 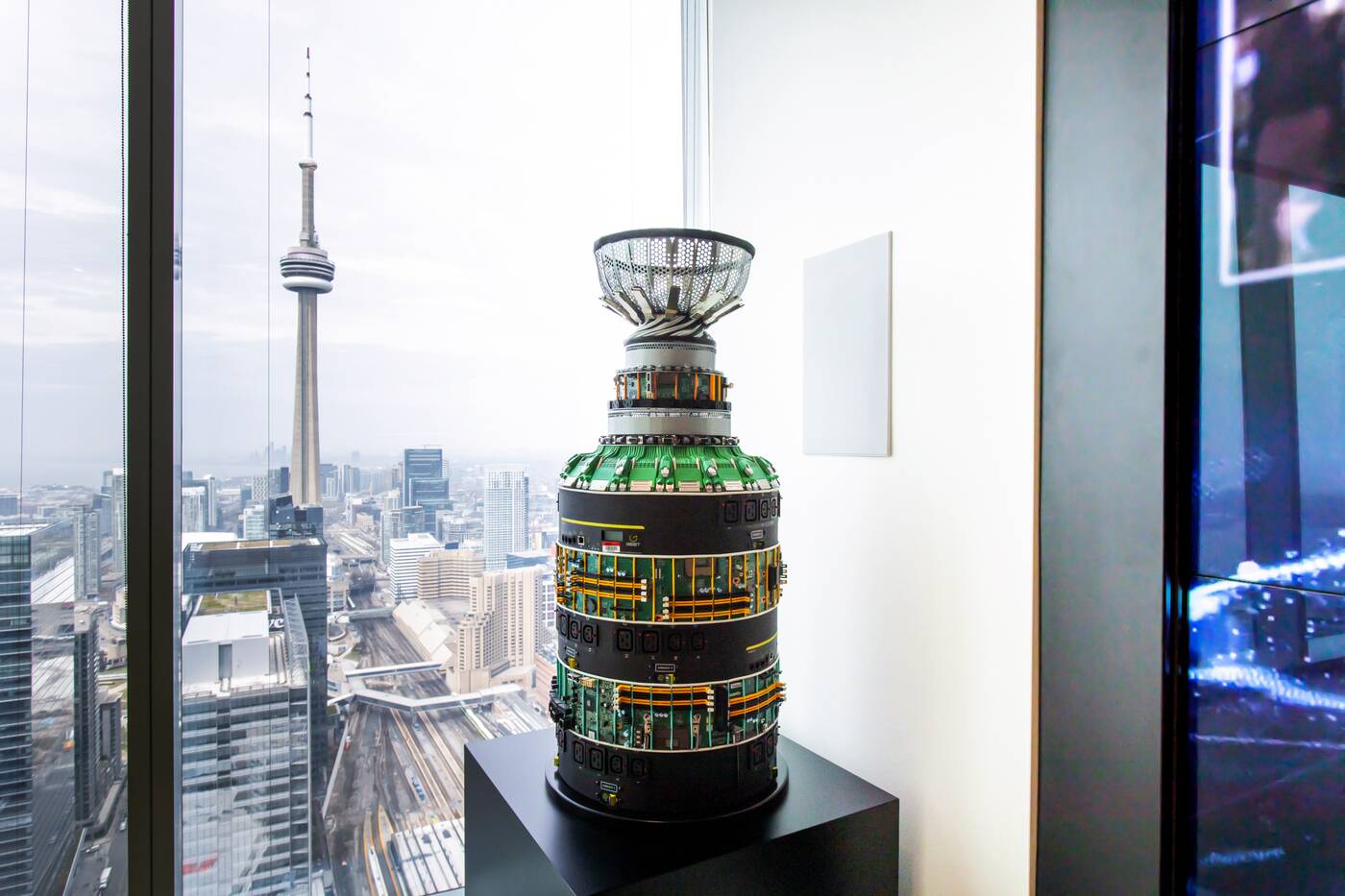 The overarching themes of the space are Canadiana and the outdoors, according to Microsoft senior real estate portfolio manager Peter Bergeron. 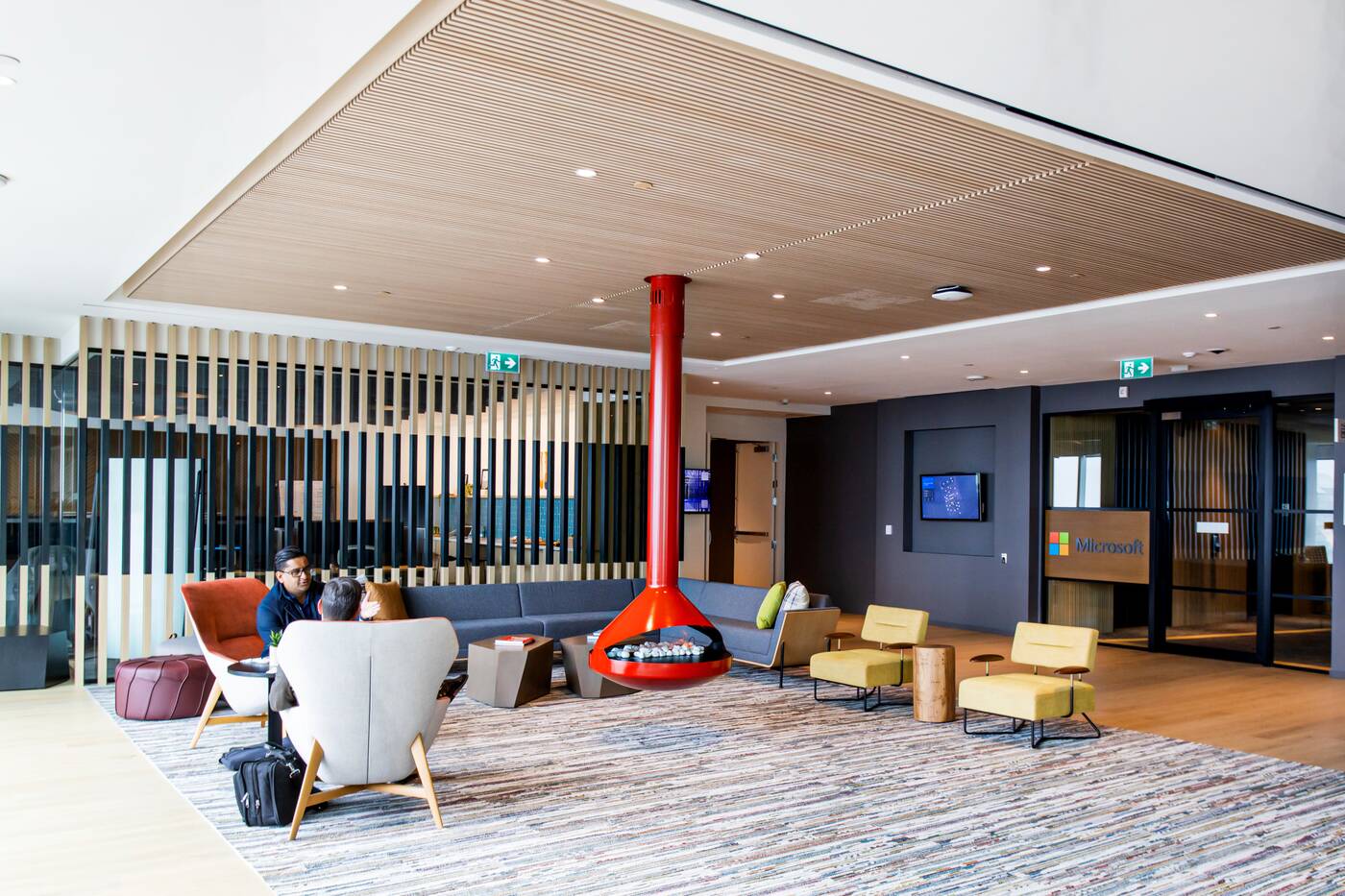 The ceiling above the "cloud bar" — a place where Microsoft workers can go to get fresh espresso-based beverages and the like whenever the want to, for free — was inspired by the Rocky Mountains. 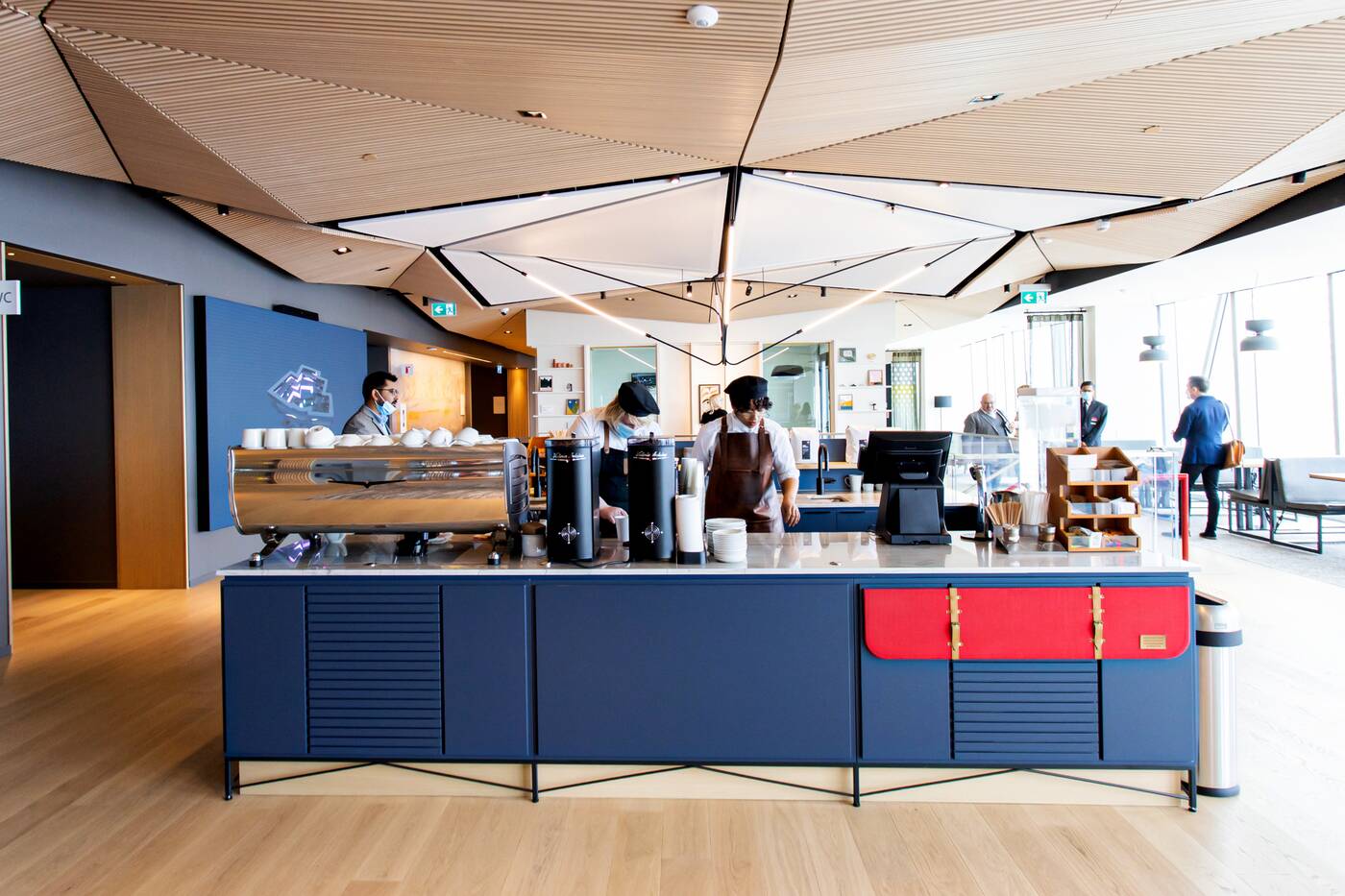 Camping is a definite reference in the design details; there are compass navigation points on the floor and the office's front desk is called "base camp." 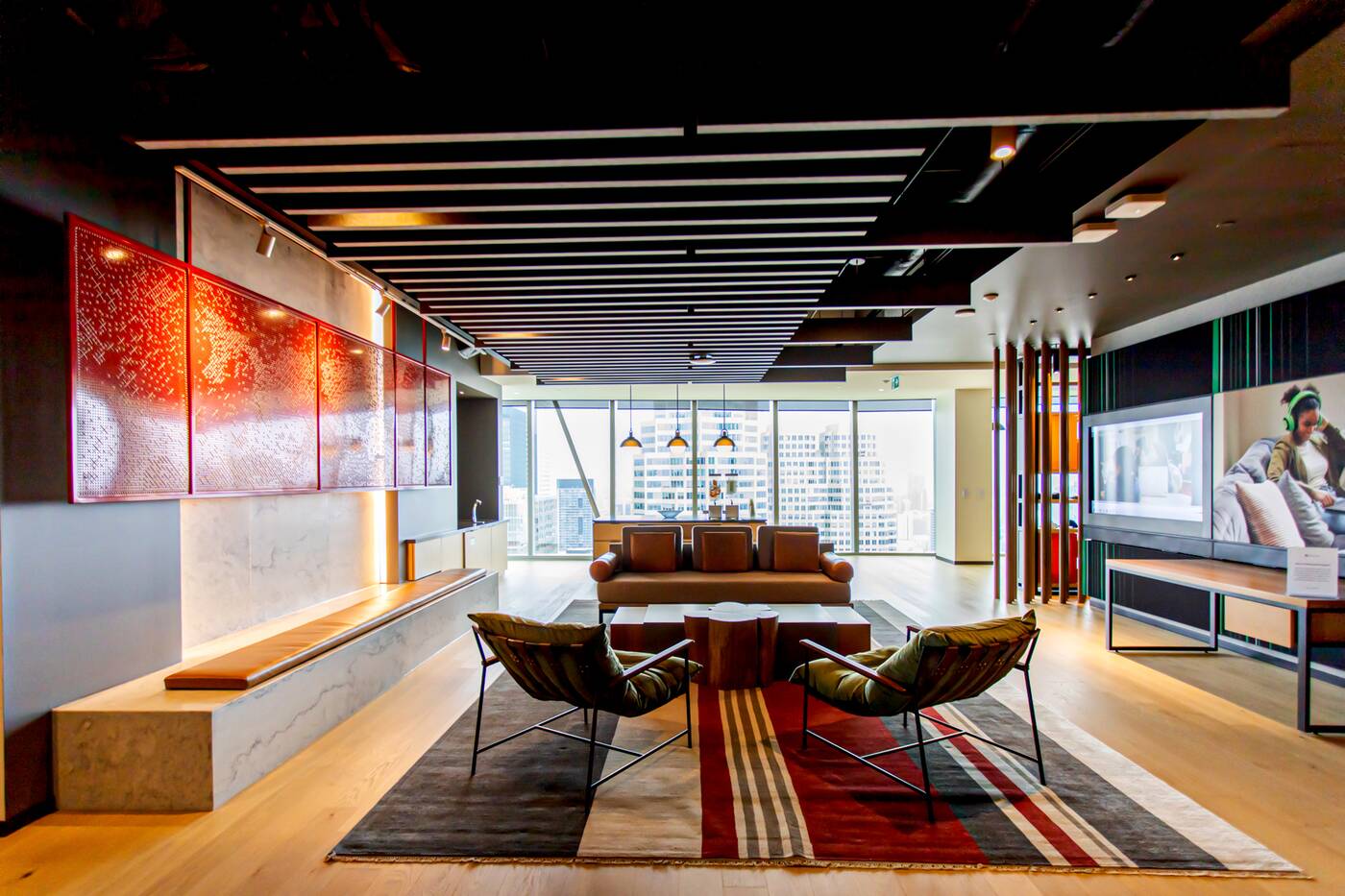 Bergeron says that the office was made with Canadian-sourced materials, including stone, wood, and custom steel and millwork. 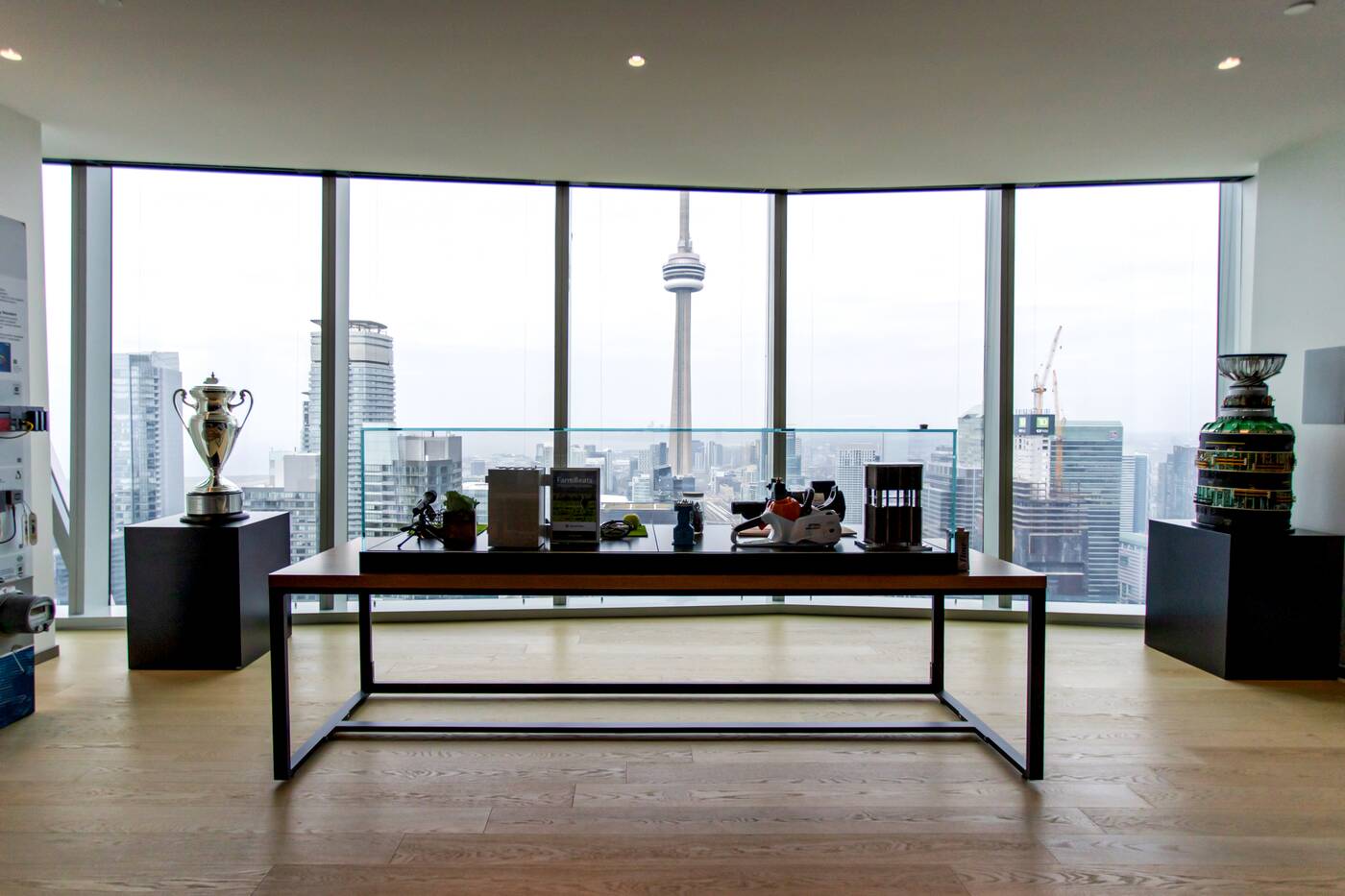 Art can be found throughout the space, 100 per cent of it said to be Canadian. 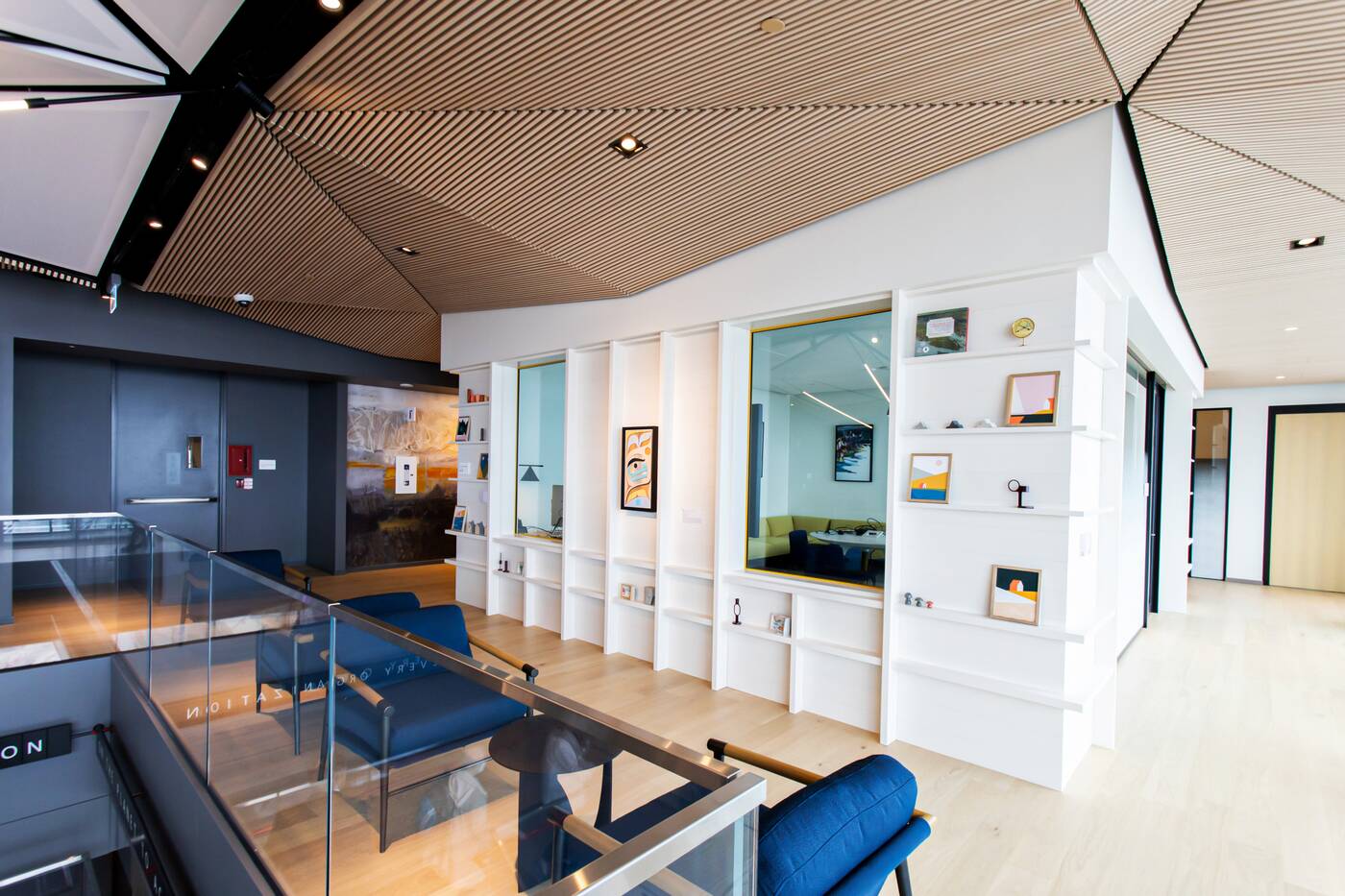 Microsoft commissioned an Indigenous youth artist to create the mural seen in the photo below. It was inspired by an Xbox controller and is one of many pieces of art I stopped to stare at today. 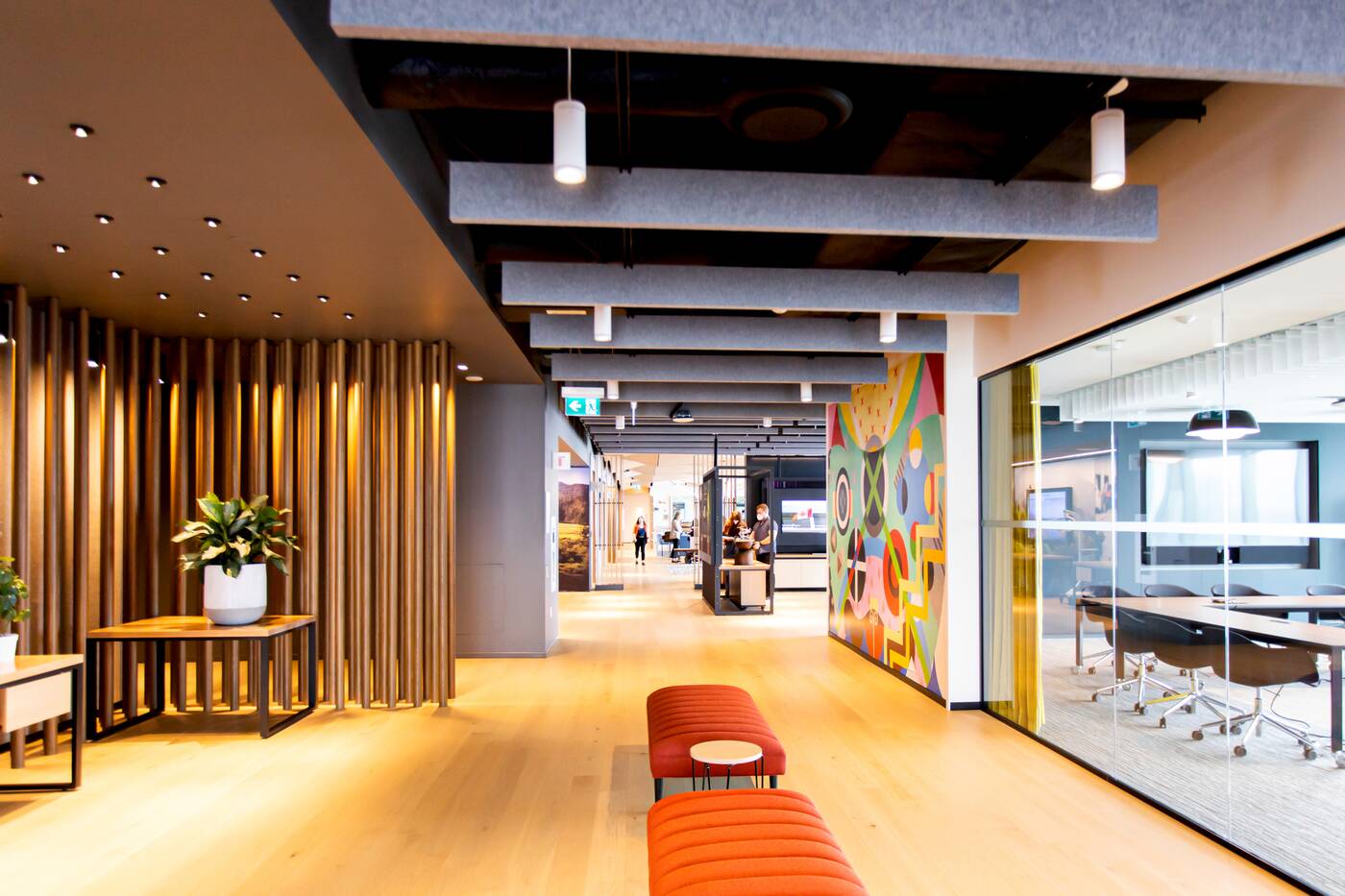 There's a lot of great art at this new HQ. And this view can't be understated. You can look right down over Scotiabank Arena, The Gardiner, Lake Ontario, The Toronto Islands, The L Tower and far off into the distance looking north. 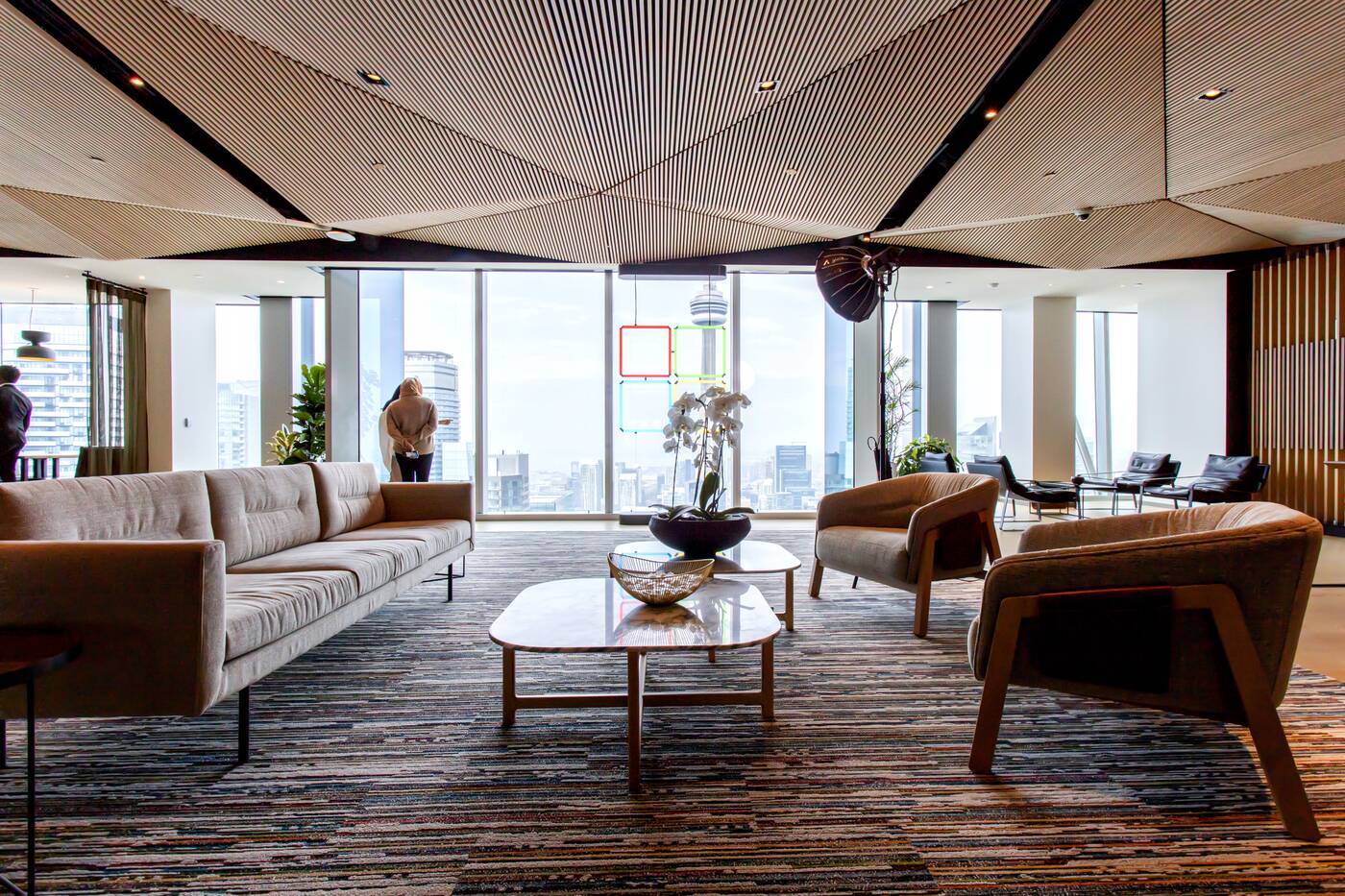 The architects at Toronto's Perkins&Will collaborated with Atlanta's ai3 to bring Microsoft's vision to fruition. 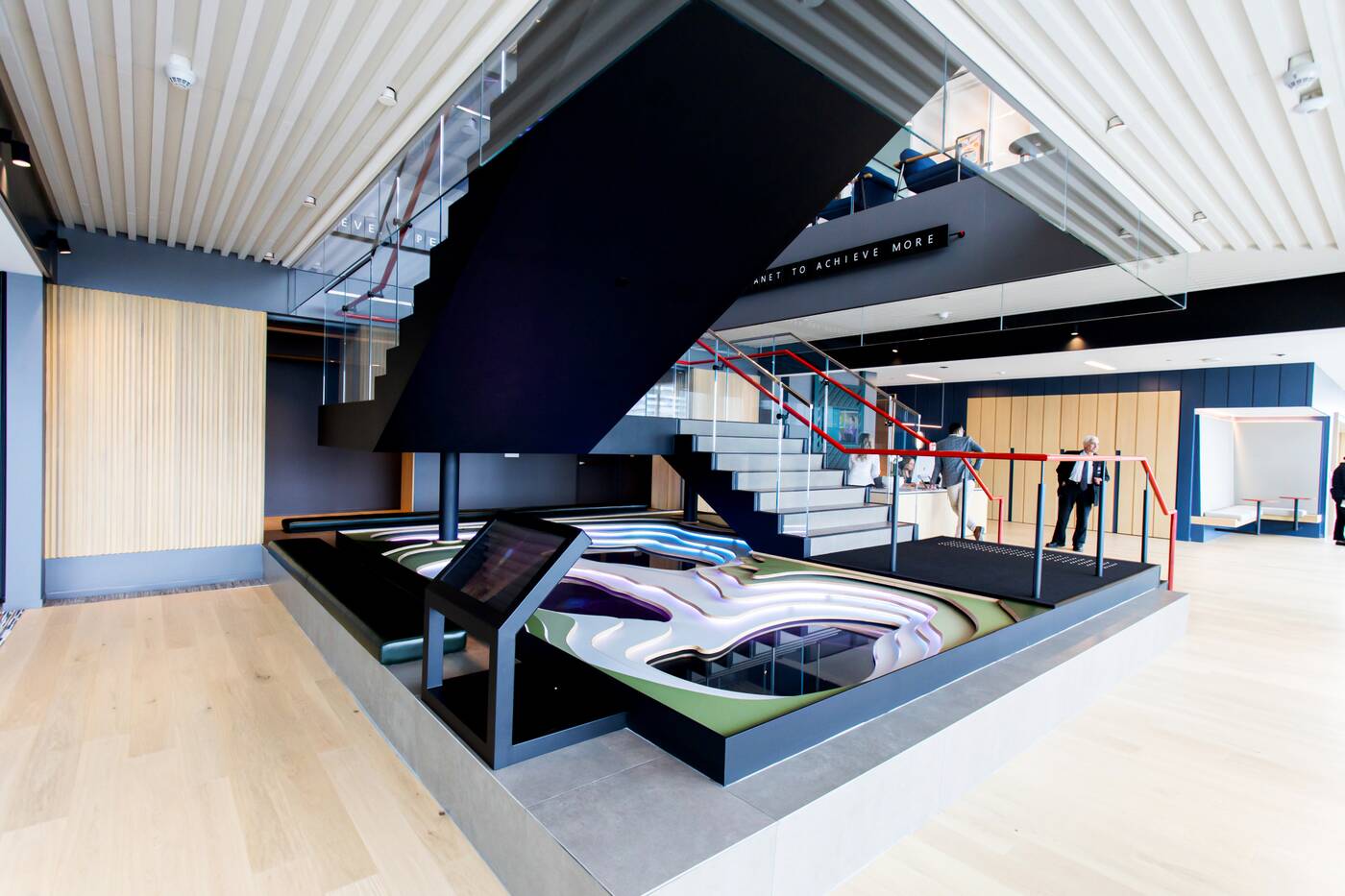 Red paint, maple leaves and boardrooms named after The Great Lakes (Huron, Superior, Erie) are more obvious nods to the "Canada" part of Microsoft Canada, but there's a whole lot of "Microsoft" in the mix as well. 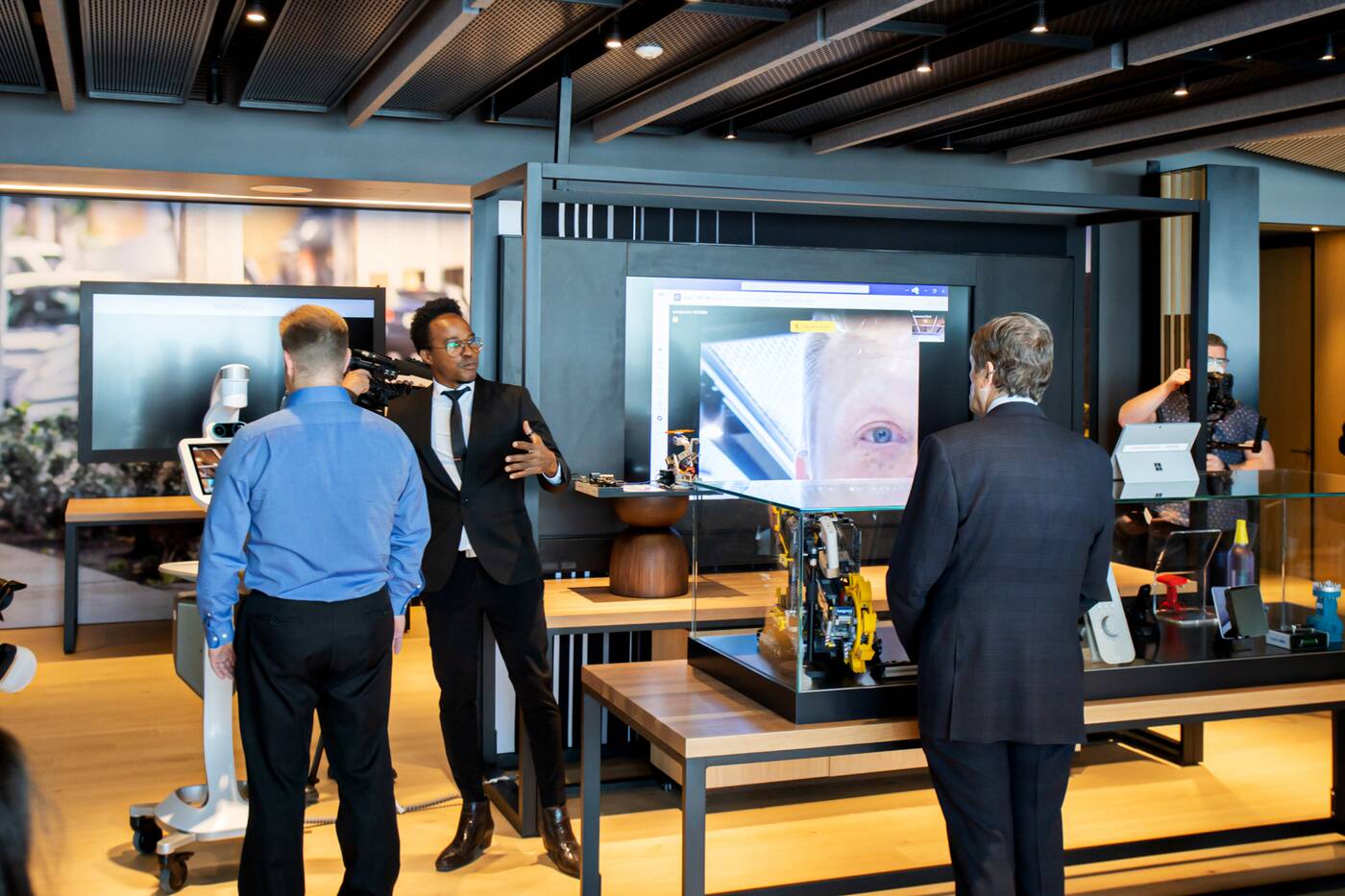 This headquarters was selected, says Microsoft, to host an Envisioning Centre (a prototyping lab where you can see demos of emerging technologies before anyone else) and Microsoft's first-of-its-kind Data Innovation Centre of Excellence (DICE) — a service that provides "cutting edge data, AI and mixed reality technology solutions" to partners. 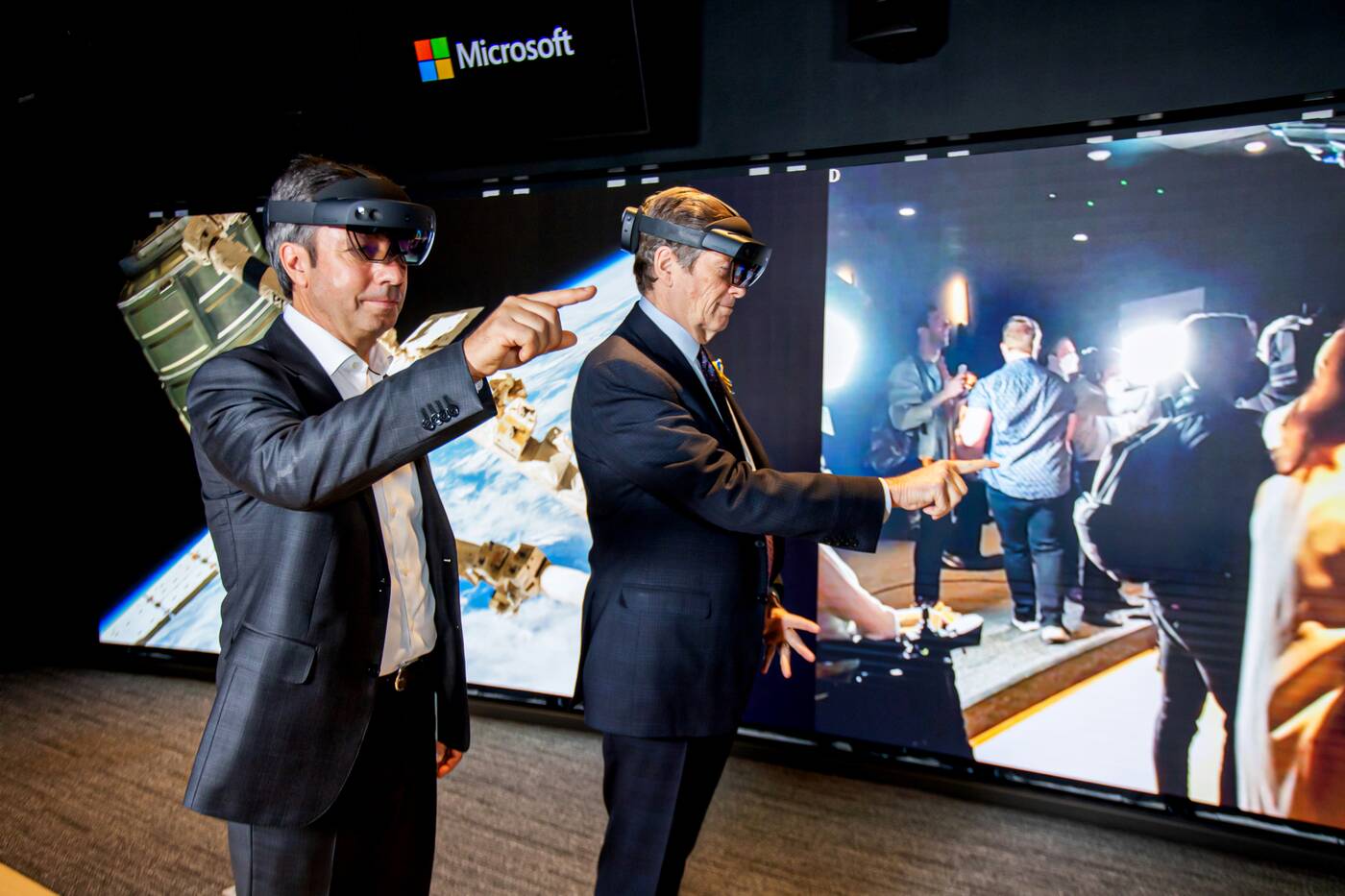 Toronto Mayor John Tory got to experience some of said technologies by donning a HoloLens mixed reality headset and entering the metaverse.

Tory delivered an impassioned speech during the launch event, hyping Toronto's tech sector and the city itself, praising the city's brilliant brainpower.

He hailed the new data innovation Centre at Microsoft as "hugely important to Toronto." 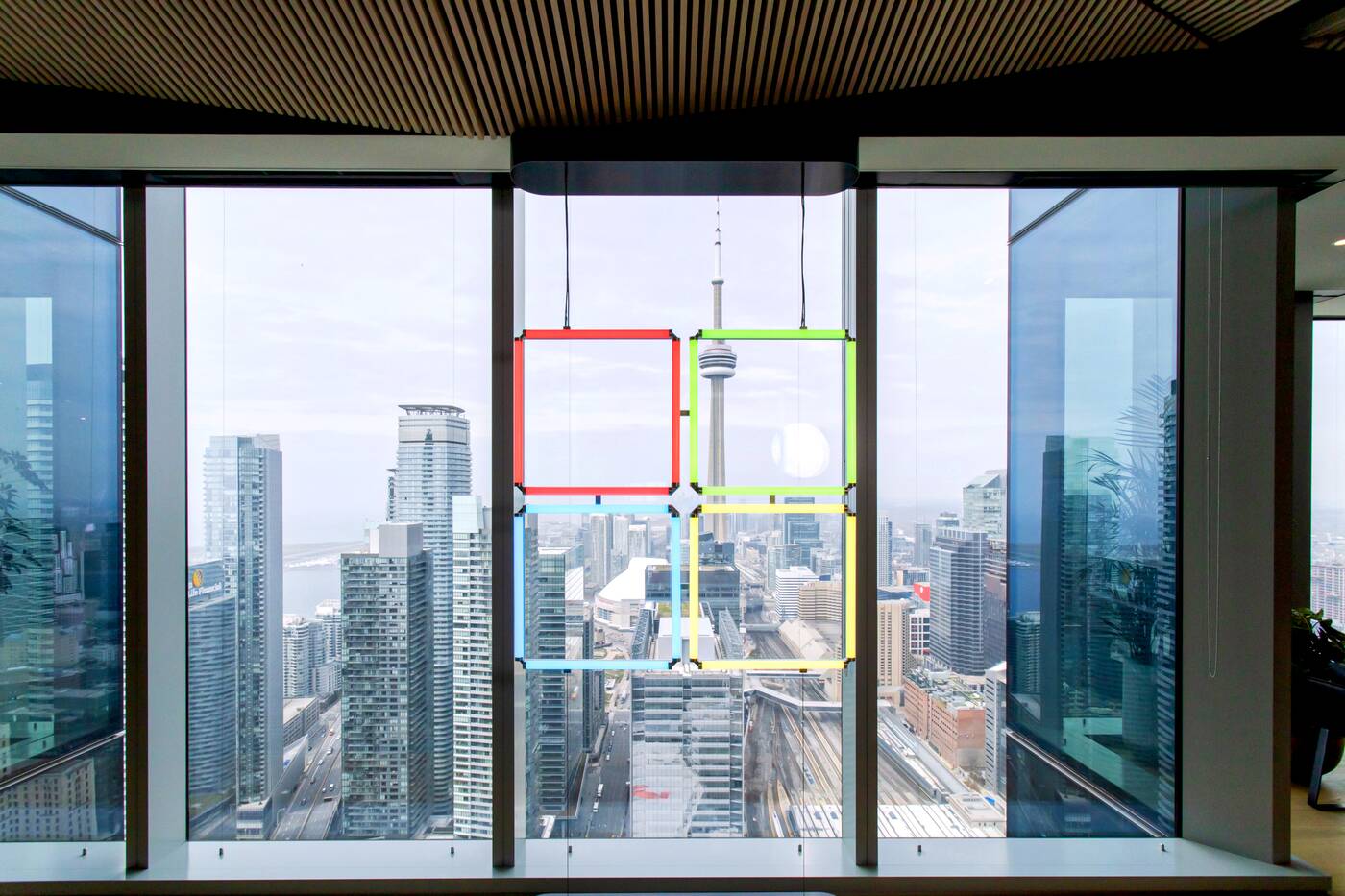 "The official opening of Microsoft's new downtown headquarters is the next milestone in our city's continued growth as one the leading technology hubs in North America," said Tory in a release following today's press conference.

"We're so pleased to see this new Microsoft office opening. It will mean more innovation across Toronto's world-class network of universities, start-ups and incubators — all of which will help us continue our strong economic recovery from the pandemic."