The original Toronto location of Canadian spin studio SPINCO has been evicted by its landlord, three weeks after the provincial government shuttered gyms and implemented additional Stage 2 lockdown restrictions across the city and other COVID-19 hotspots.

The chain made headlines earlier this month after a whopping 72 infections of the communicable disease were linked to an outbreak at its Hamilton outpost — courtesy of a member who is thought to have caught the virus from a bar in Toronto — prompting Premier Doug Ford to review current health and safety measures at such facilities.

Now, members have discovered a notice in the window of the now-closed uptown Toronto SPINCO near Yonge and Eglinton, alleging that the brand has failed to pay rent for quite some time and booting it from the property.

"On numerous occasions over the past several months, we have attempted to make arrangements with you regarding repayment of the substantial rent arrears," the letter, dated Oct. 27, reads.

"Unfortunately, we are no longer able to wait any further for payment and must take steps to generate revenue at this property. Therefore, this note will serve as your official notification that your lease has been terminated."

The correspondence goes on to demand that SPINCO remove all of its equipment from the premises by Nov. 3, or else it will be considered abandoned and appropriately disposed of.

The doors of the gym at 2577 Yonge Street are closed to members, who were not given any warning. 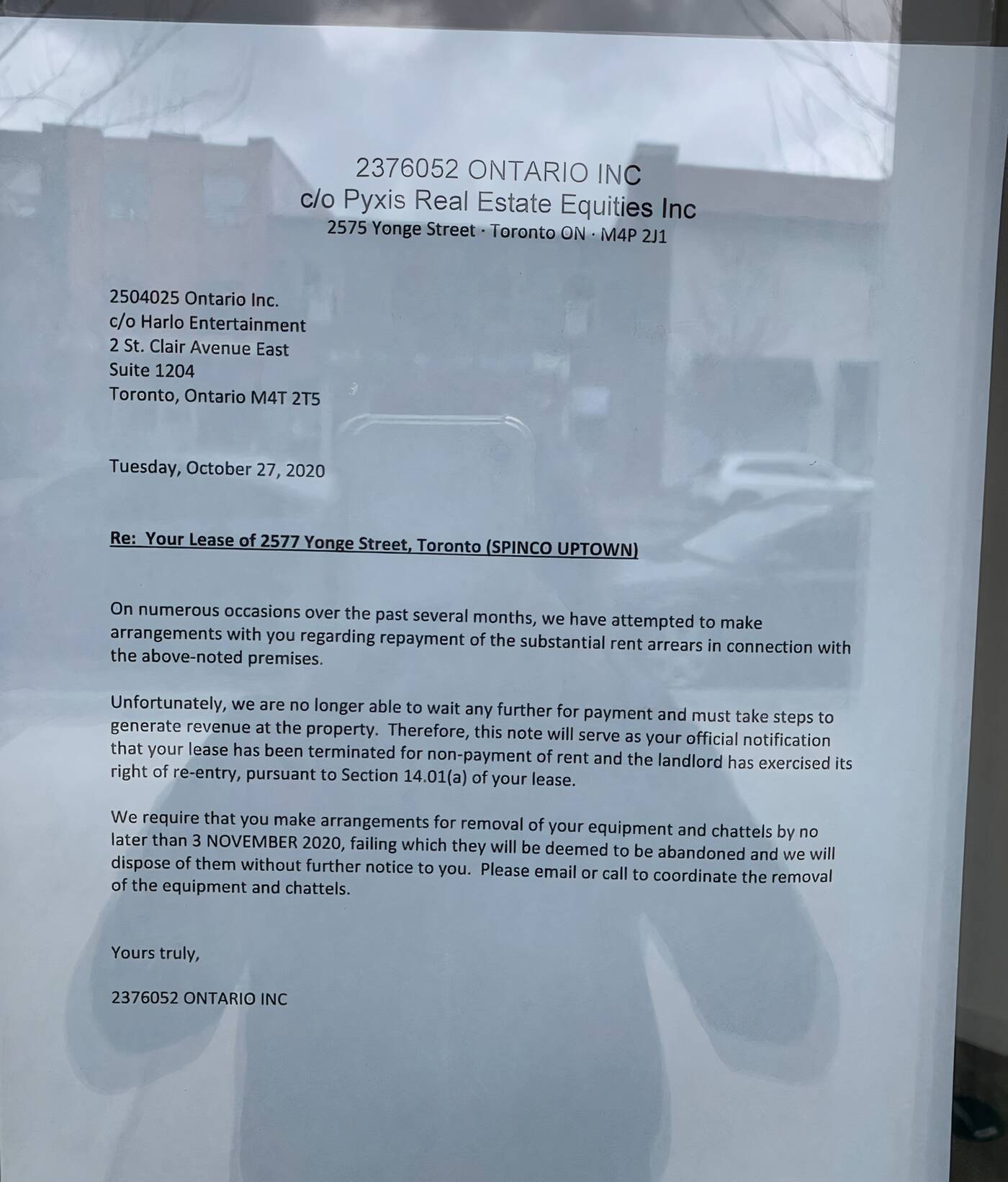 The notice at SPINCO Uptown, submitted to blogTO

SPINCO opened this debut Toronto location back in 2016, later expanding to two more studios: one just slightly south at 1220 Yonge St., and one at 129 Spadina Ave., at Richmond.

Fitness facilities, especially smaller brands, are among the businesses struggling the most this year due to the pandemic, and have begged the government for further assistance and looser rules.

Ford further lowered indoor capacities for fitness classes and gyms in general at the beginning of October before following the advice of Toronto Medical Officer of Health Dr. Eileen de Villa and closed them completely in Toronto, Ottawa, Peel, and then York.

Such facilities will remain closed with a few exceptions until at least Nov. 7, when Ontario's health panel will reassess the province's COVID situation.