Crosley's is open for takeout, patio and indoor dining. Masks are mandatory and hand sanitizer is available at the entrance.

Crosley's first gained a name for itself through pop-up dinner services at Bar Piquette before drawing in epicures to its home on the Ossington strip with an ever-changing menu.

Expect similarly thoughtful meals equally focused on local ingredients here to that of the five-course weekend menu served out of the West Queen West wine bar. 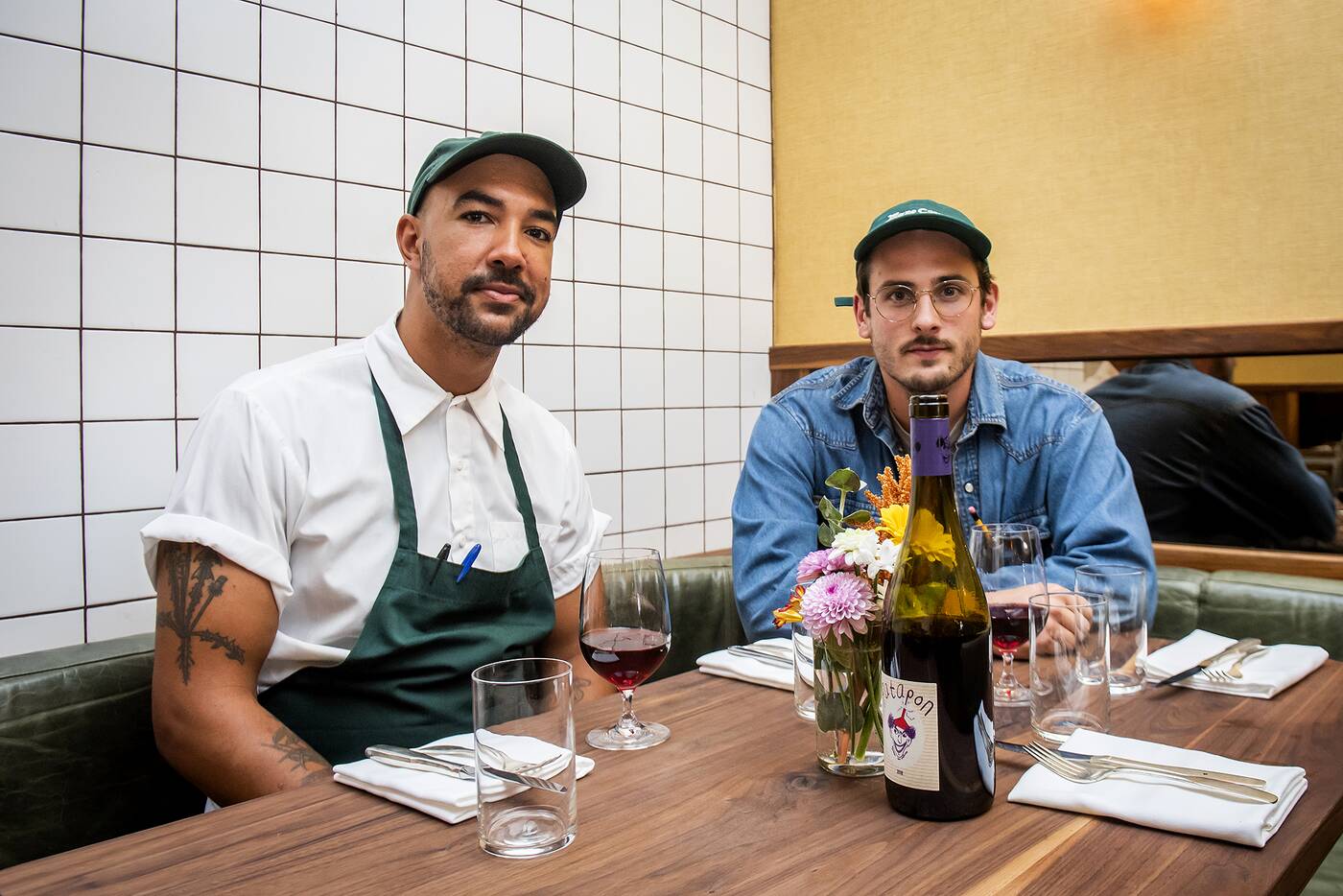 The pioneers of that project and owners, chef Joachim Hayward and sommelier and Solid Olive owner Myles Harrison, met working at the now-closed Brothers where Hayward was head chef.

Hayward started cooking in high school while growing up in Vancouver and honed his craft in Sydney, Bristol and London. Also from B.C., Harrison lived in Montreal for a time before moving to Toronto where he helped to open St. Regis as wine director. 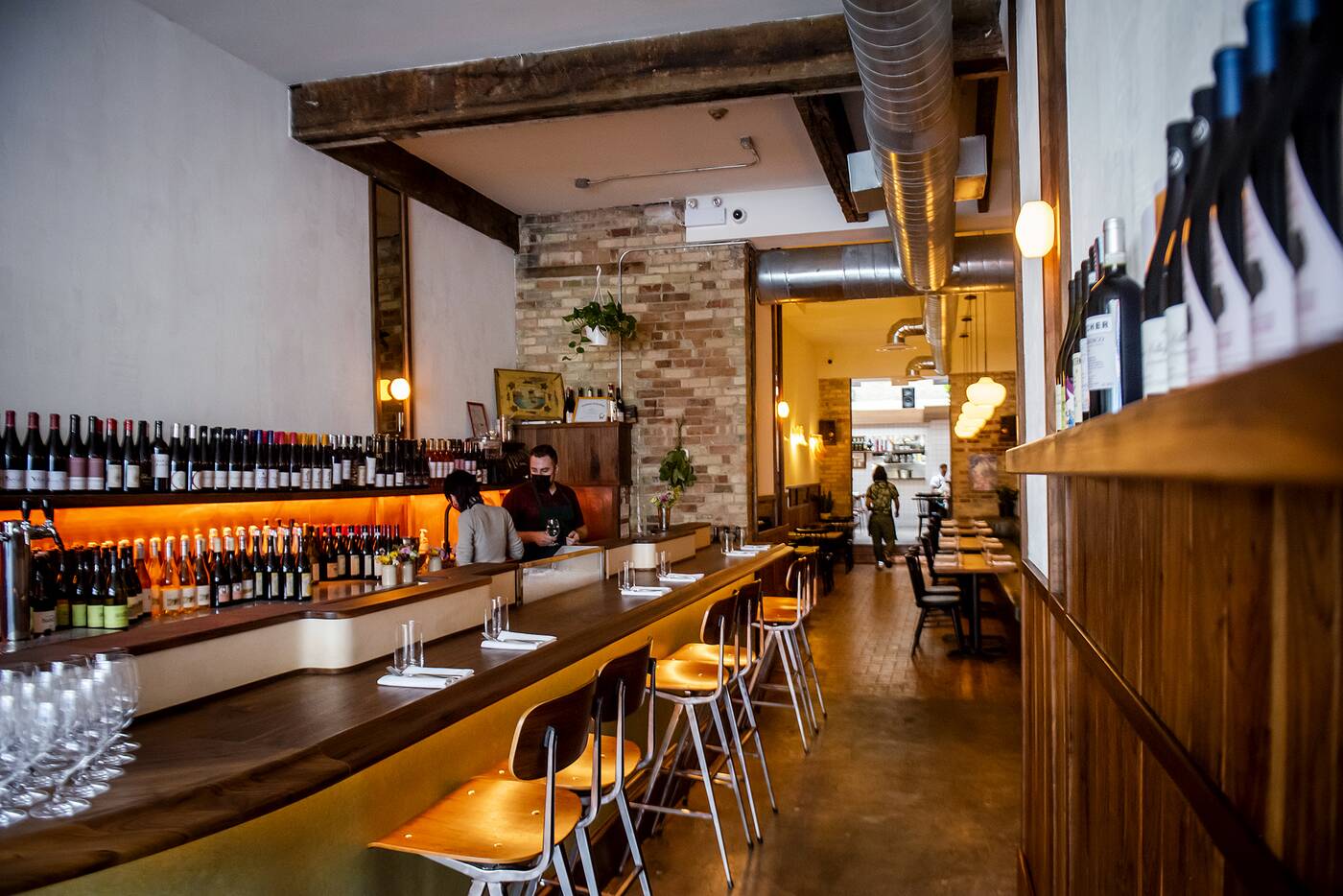 The friends partnered up with Bar Piquette owners J.P. and Laura Adamo to turn this spot that had a good six-year run as a nightclub into a homey food hotspot. 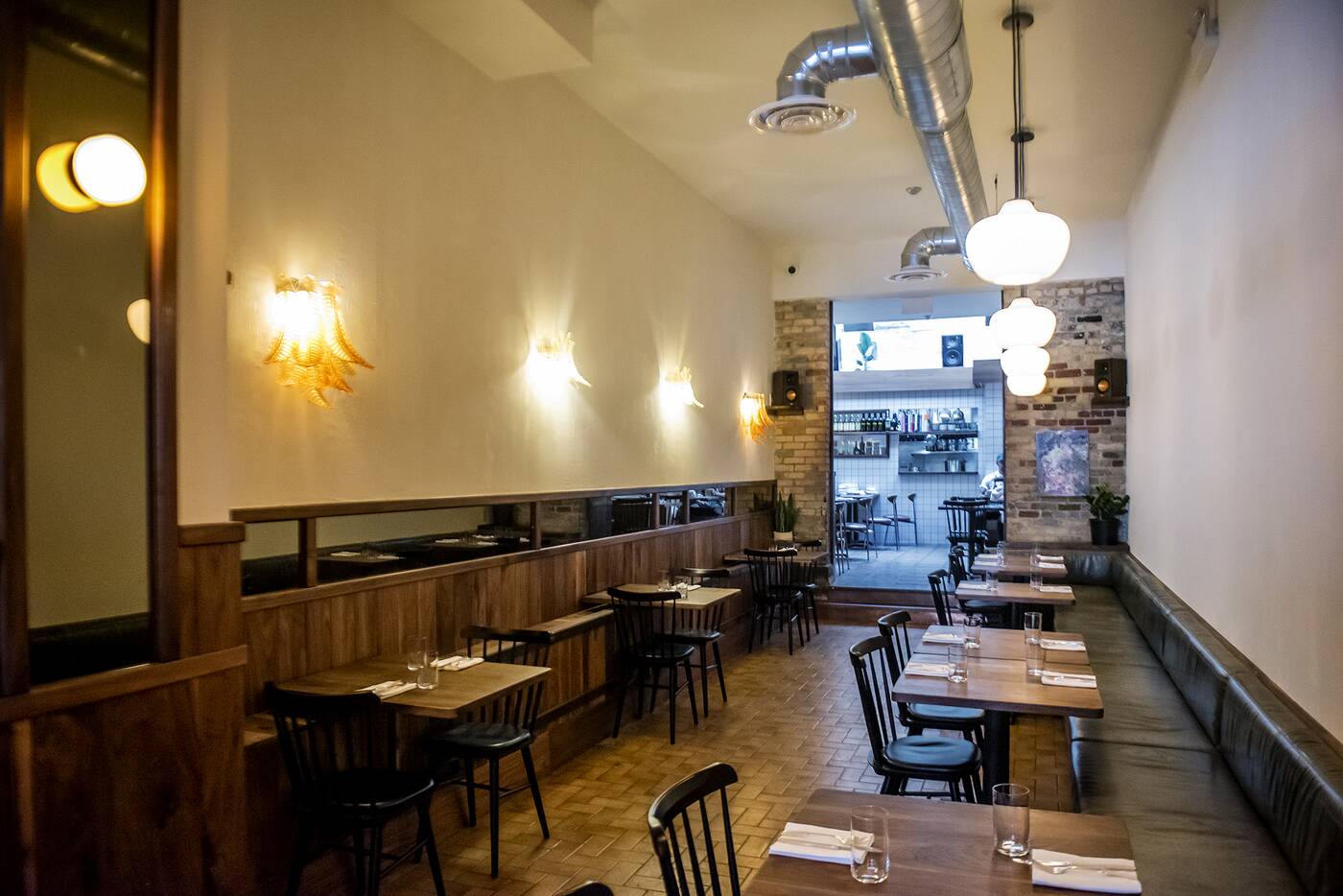 If you didn't know of La Porte, you probably wouldn't guess that the now clean white walls (it took five paint coats to cover the black) and tasteful wooden accents replace a dark dance bar. 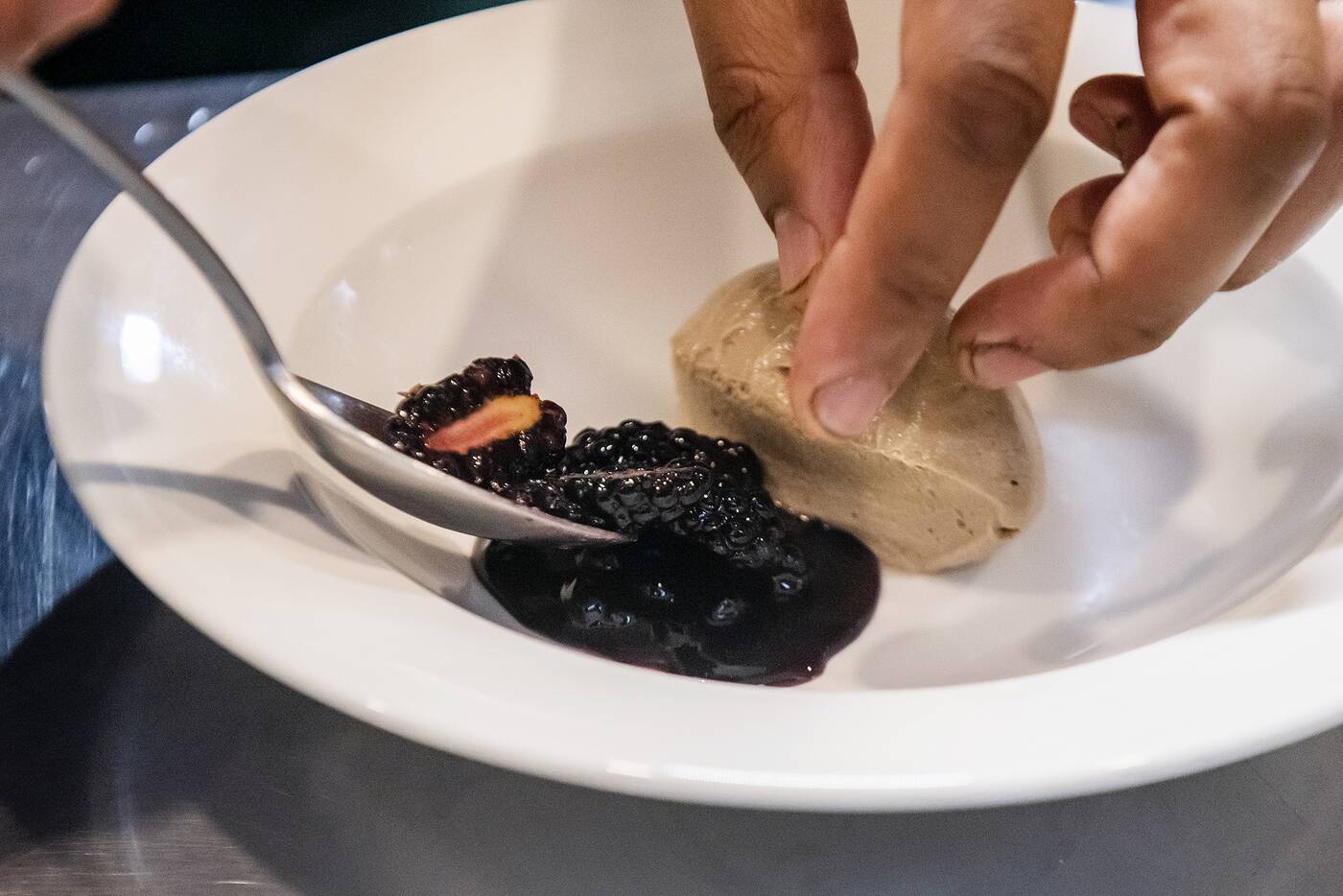 As the menu changes with the seasons, there's no telling what will be available when you go. During our visit, chicken liver and foie gras mousse ($13) is one of the dishes Hayward is whipping up. 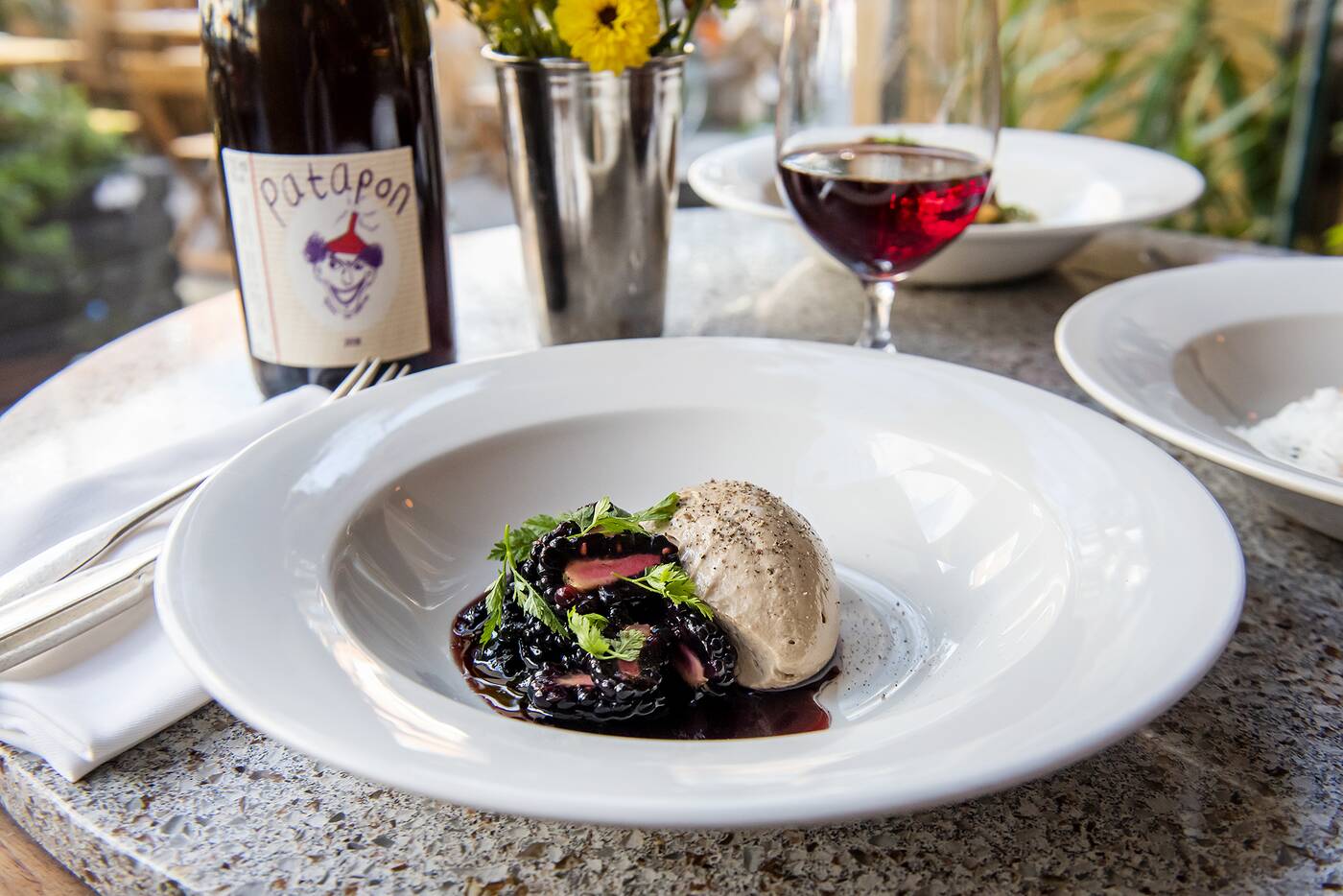 The recipe calls for copious amounts of butter and plenty of Brandy before being infused with foie gras and chicken liver from Pavao. Blackberries in a pool of blueberry mostarda go on the side.

Extremely rich and buttery, it's best to offset the strong flavours with a few slices of Robinson's sourdough. 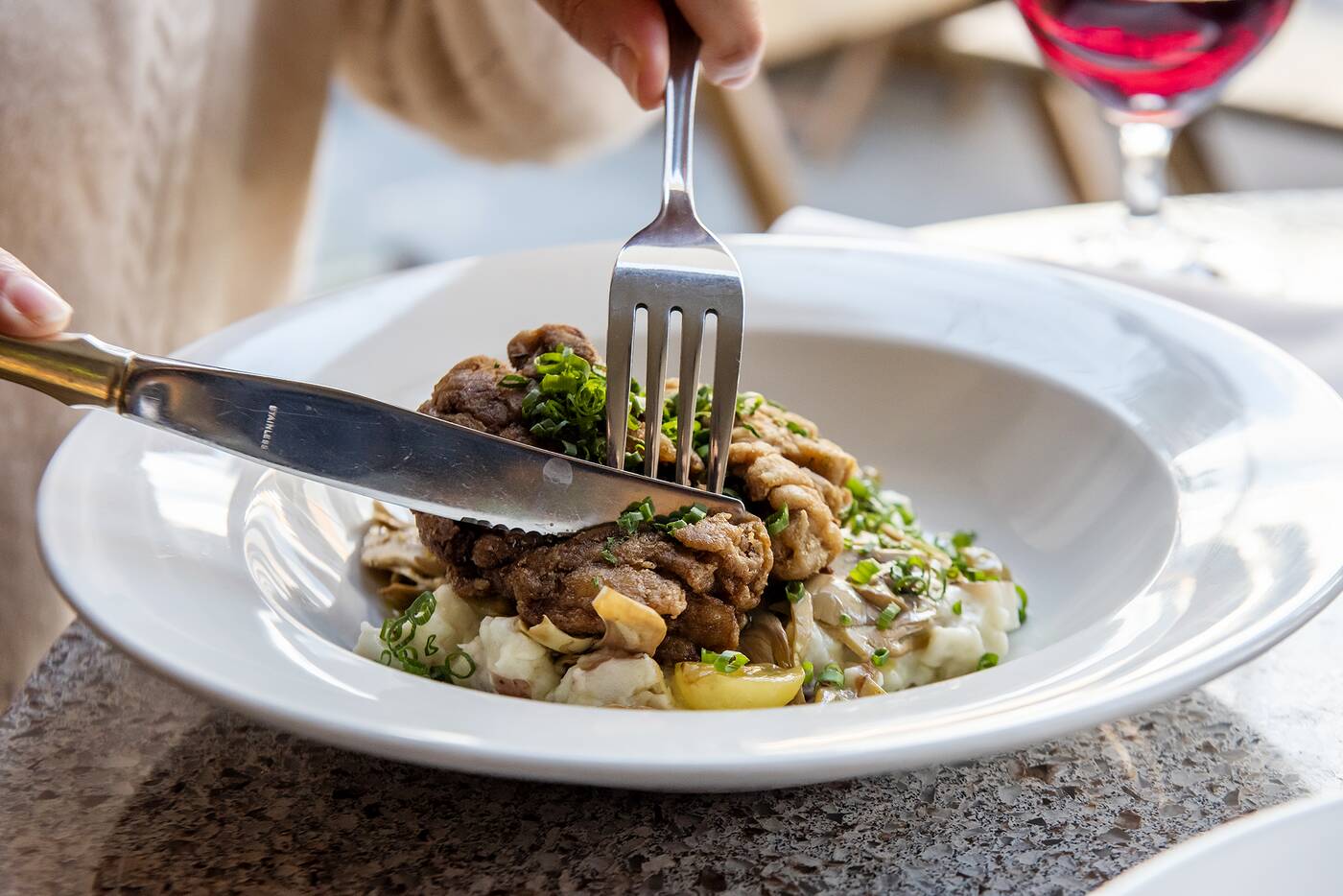 Another is veal sweetbread ($24) from Quebec, which Hayward says is some of the best you'll have in the country.

Imitating a piece of fried chicken in both texture and taste, it sits on top of mashed potatoes, marinated artichokes and Niagara grapes, which are cut with vinegar to balance their sweetness. 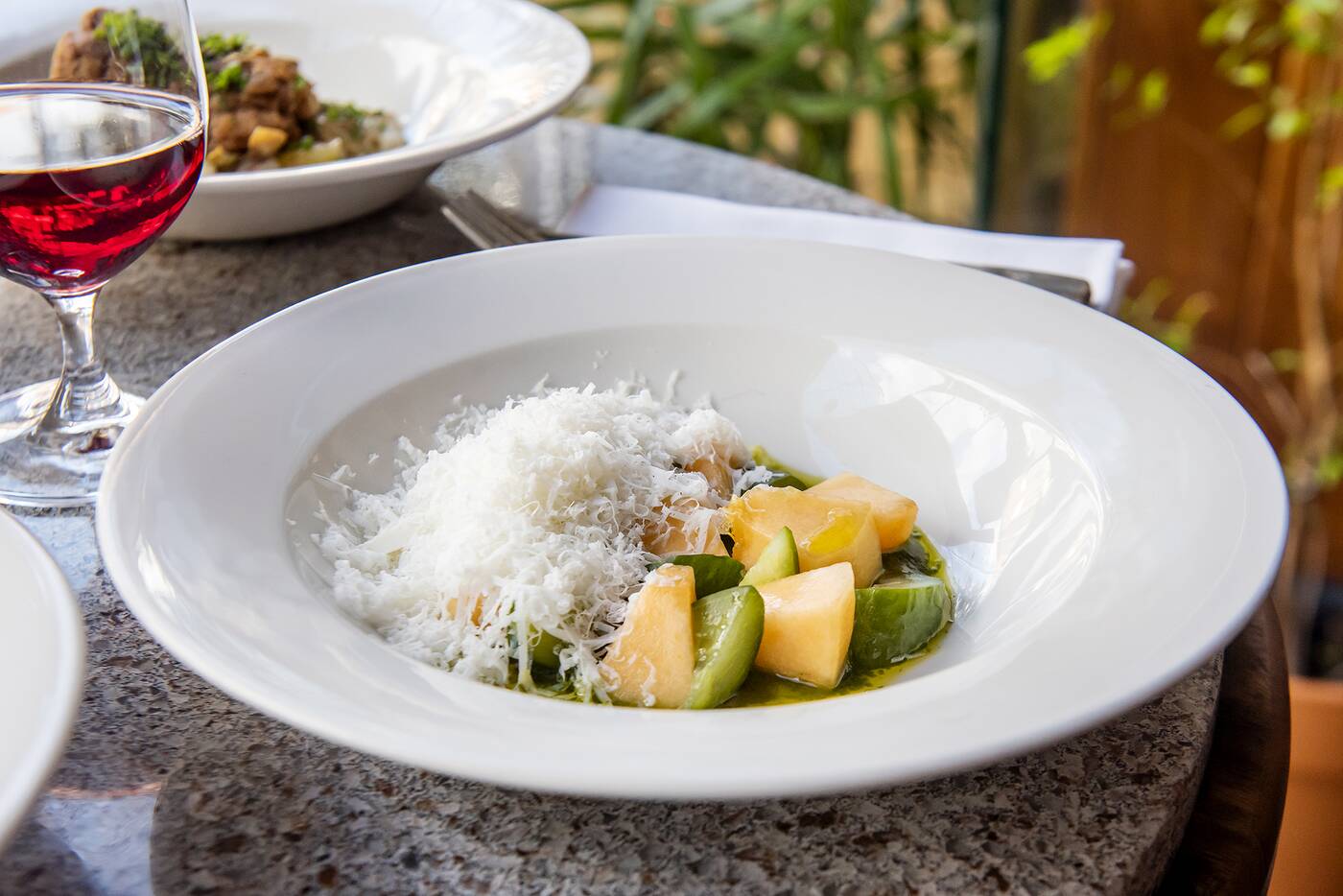 Simplistic in execution and presentation, but not in flavour, is the melon and cucumber with Ricotta Salata (a pressed and salted ricotta cheese from central Italy). The Ontario melon ($16) is interspersed with fresh mint and cucumbers aptly described as boujee pickles, doused in vinegar and salt. 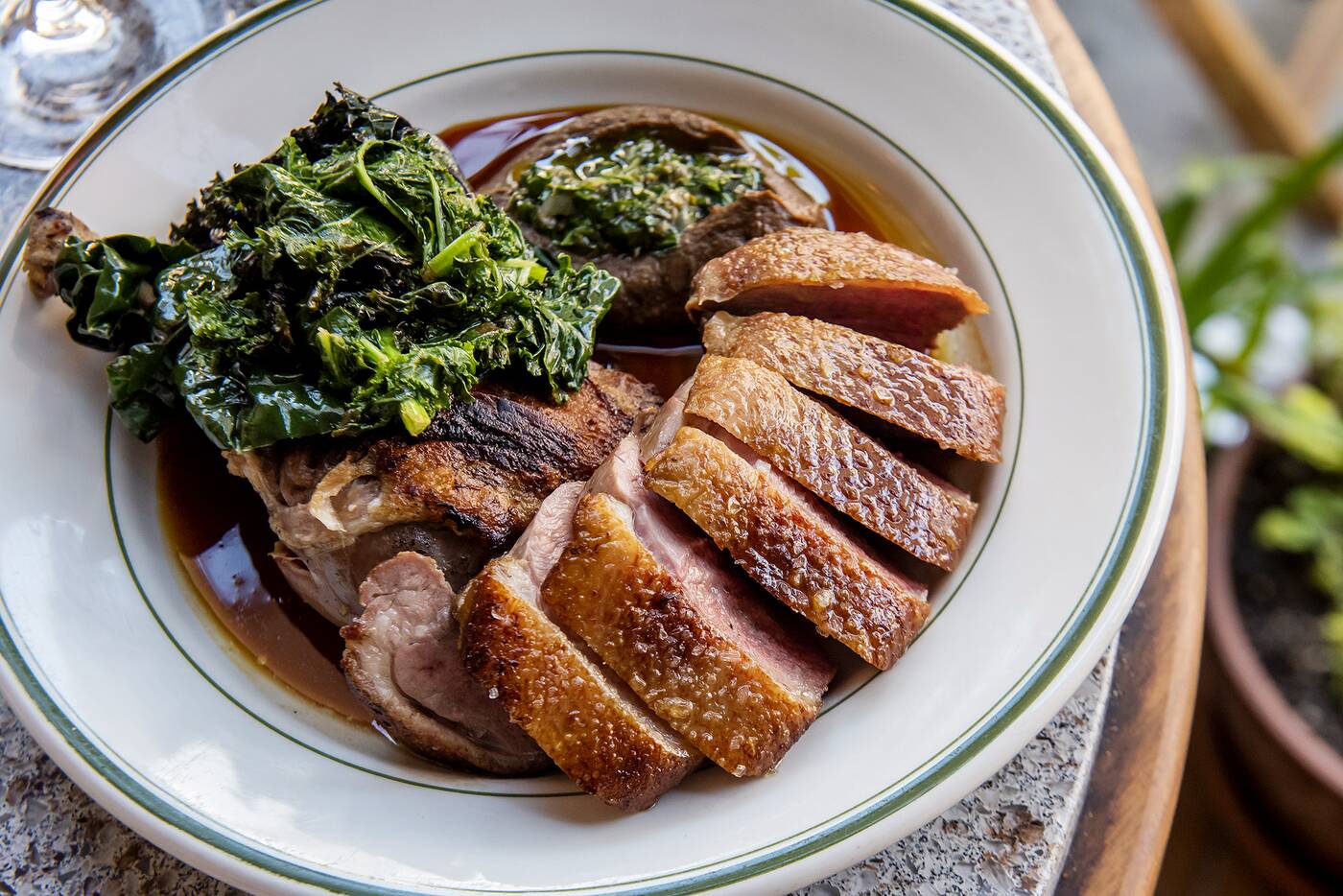 Rounding out the list of food offerings is Ontario duck ($45). The tender pieces of meat are served on a plate with kale and mushroom ketchup. 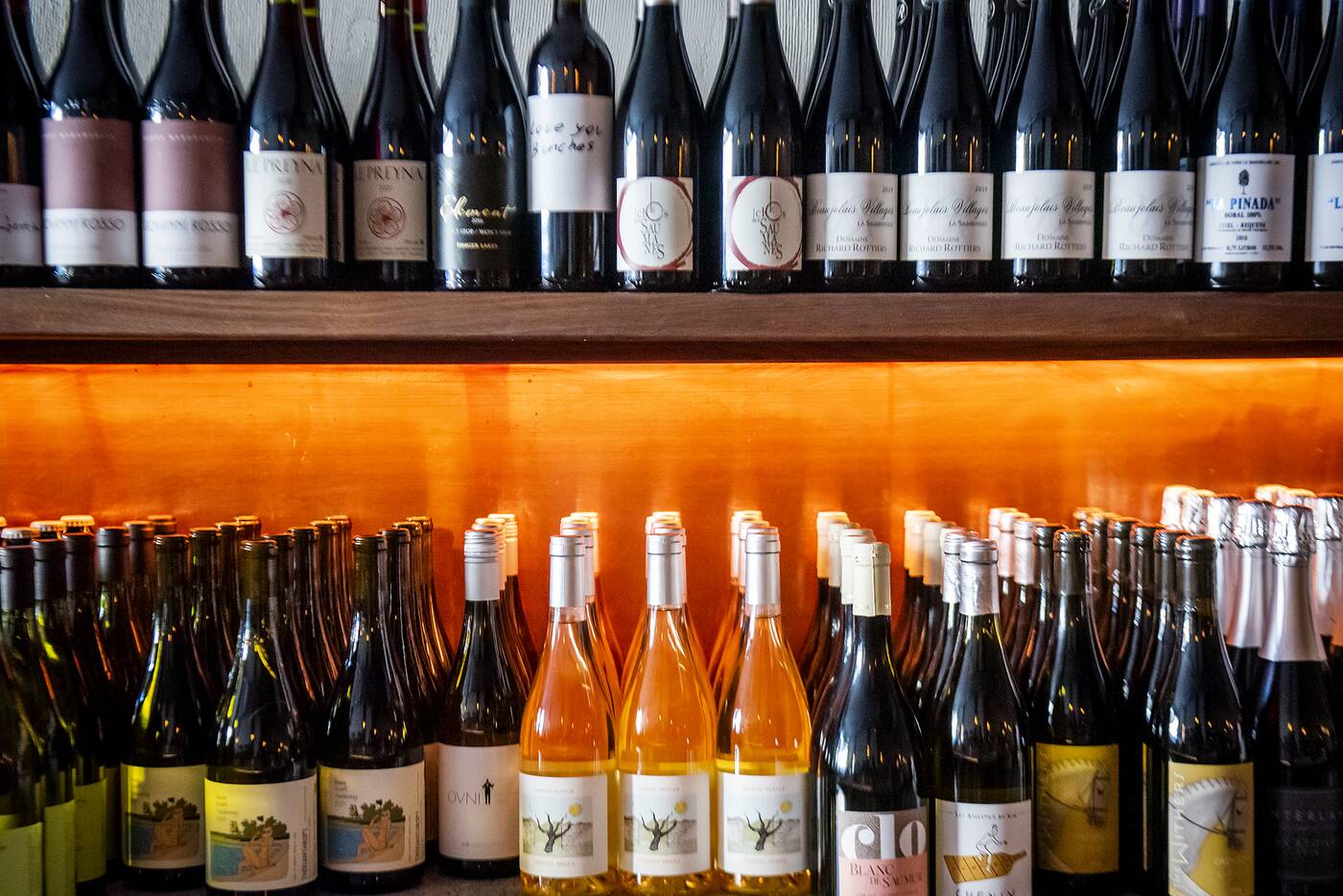 The wine list, there to complement what's on the plate, features reds, whites, sparklings and roses from France, Italy, Spain, Argentina, California, Ontario, and B.C. Harrison is your guy if you have any questions about the wine on offer. 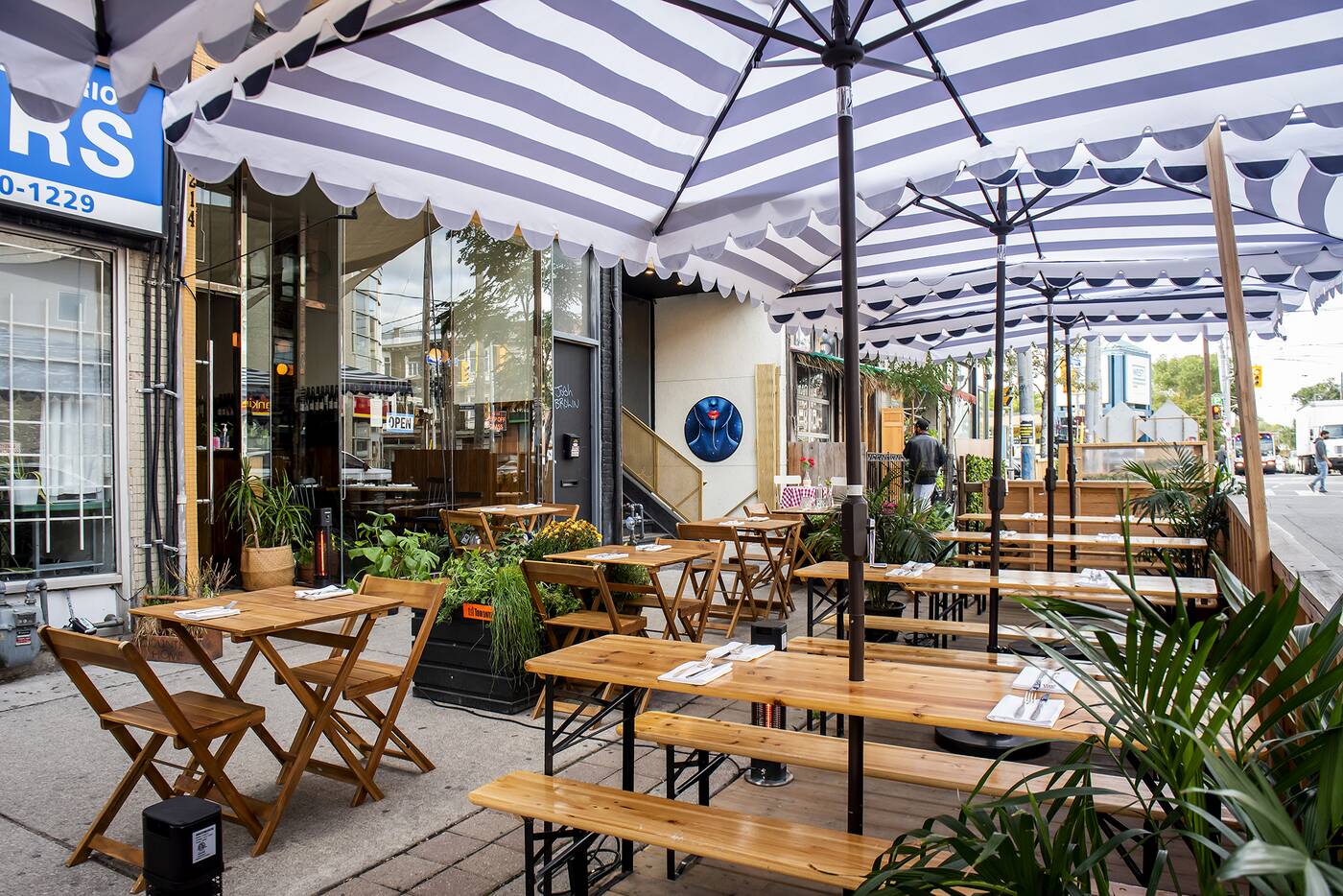 Although most tend to go for the romantic, yet relaxed atmosphere found indoors, the umbrella-covered patio out front provides the perfect spot to take in the buzz of the surrounding neighbourhood. 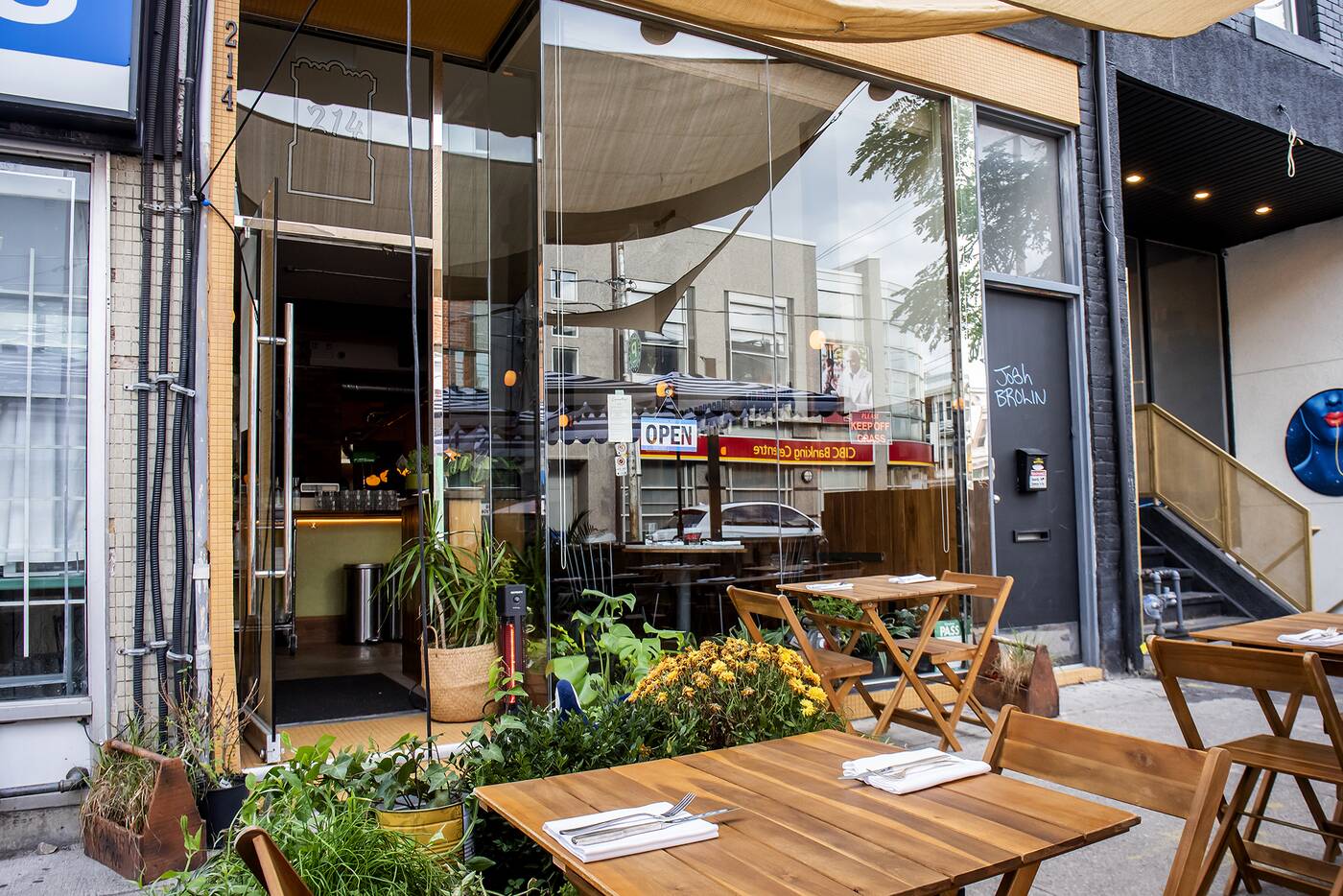