Buying property in Toronto seems a bit to me like playing a slow, measured version of the lottery, but with better odds of success and a far greater barrier to entry.

Scratch tickets may not turn many people into millionaires, but anyone who purchased a home in Canada's biggest city ten years ago could realistically have tacked an extra seven-figure sum onto their net worths since that time.

It's a slow win, but a big win, as a newly-published comparison of real estate figures in Toronto between 2013 and 2023 shows.

South Etobicoke realtor Graham Rowlands of homing.ca released his annual 10-year housing market comparison for 2023 this week, and this time around it's more comprehensive than ever.

"It is that time of the year again, where I look back at how the year end numbers compare to the previous 10 years," wrote Rowlands when sharing not one but eight new graphics analyzing everything from prices in Toronto and the GTA at large to sales figures by property type.

"While the current market is slow, real estate continues to prove to be a great investment long term. This year I really drilled in on sales volume and how we are currently sitting at 10 year or longer lows." 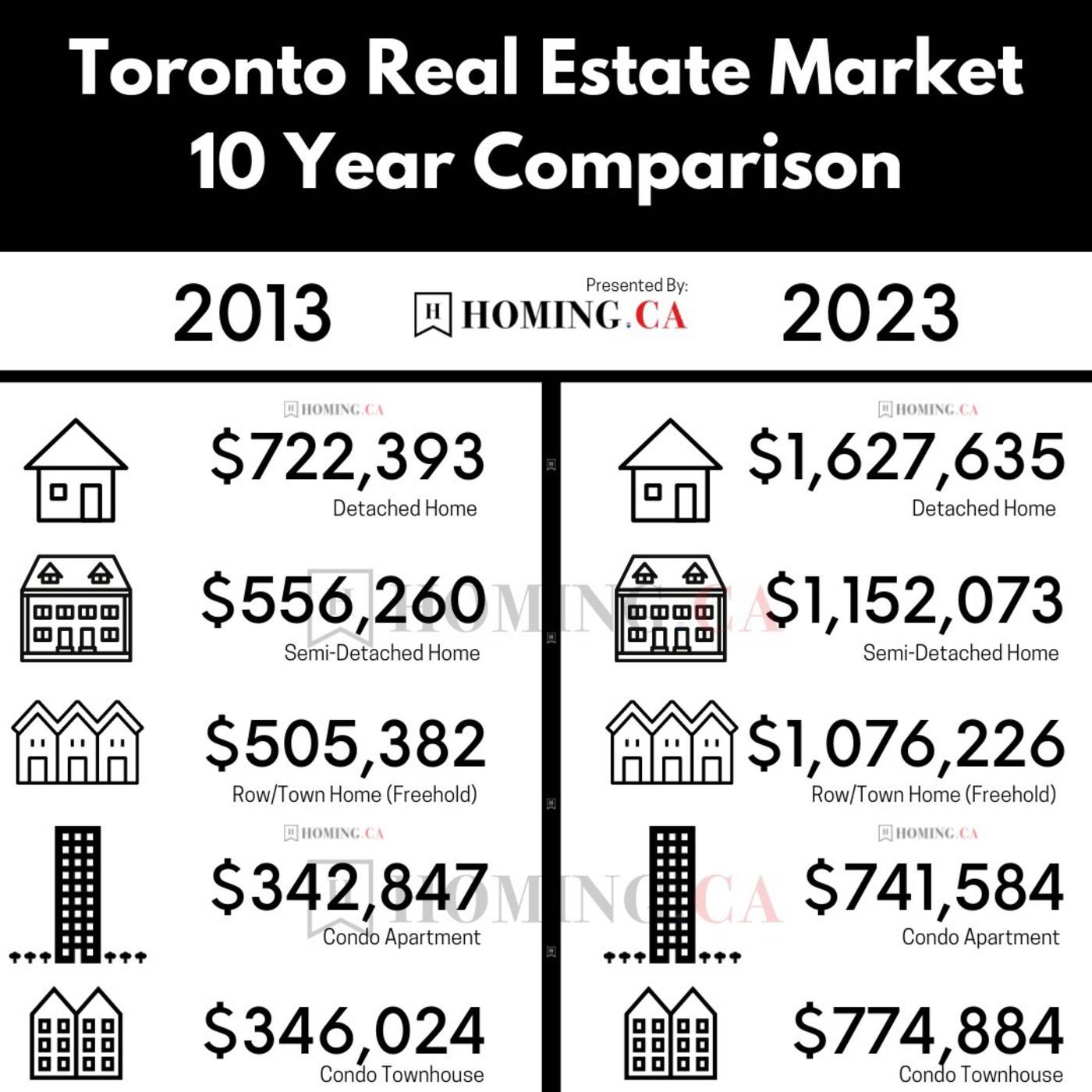 Home prices have increased by far more than average incomes over the past decade in Toronto. Graphic via homing.ca.

The average condo in the 416 is significantly less expensive than a detached home, but people who bought one ten years ago would have more than doubled their money by now, according to the figures shared by Rowlands.

With home sales down 38.2 per cent across the GTA in 2022 (nearly 50 per cent in December alone,) Toronto's real estate market has definitely cooled off since the overheated days of 2021.

According to Rowlands, sales were so soft in 2022 that they broke a 15-year-old record with only 75,140 sales reported through TRREB's MLS System.

"Unfortunately, the furthest I can go back using the TREB data is 1996, and even going back that far there hasn't been a December with fewer [detached] sales," writes the realtor, noting that condos also last experienced this few sales in 2008. 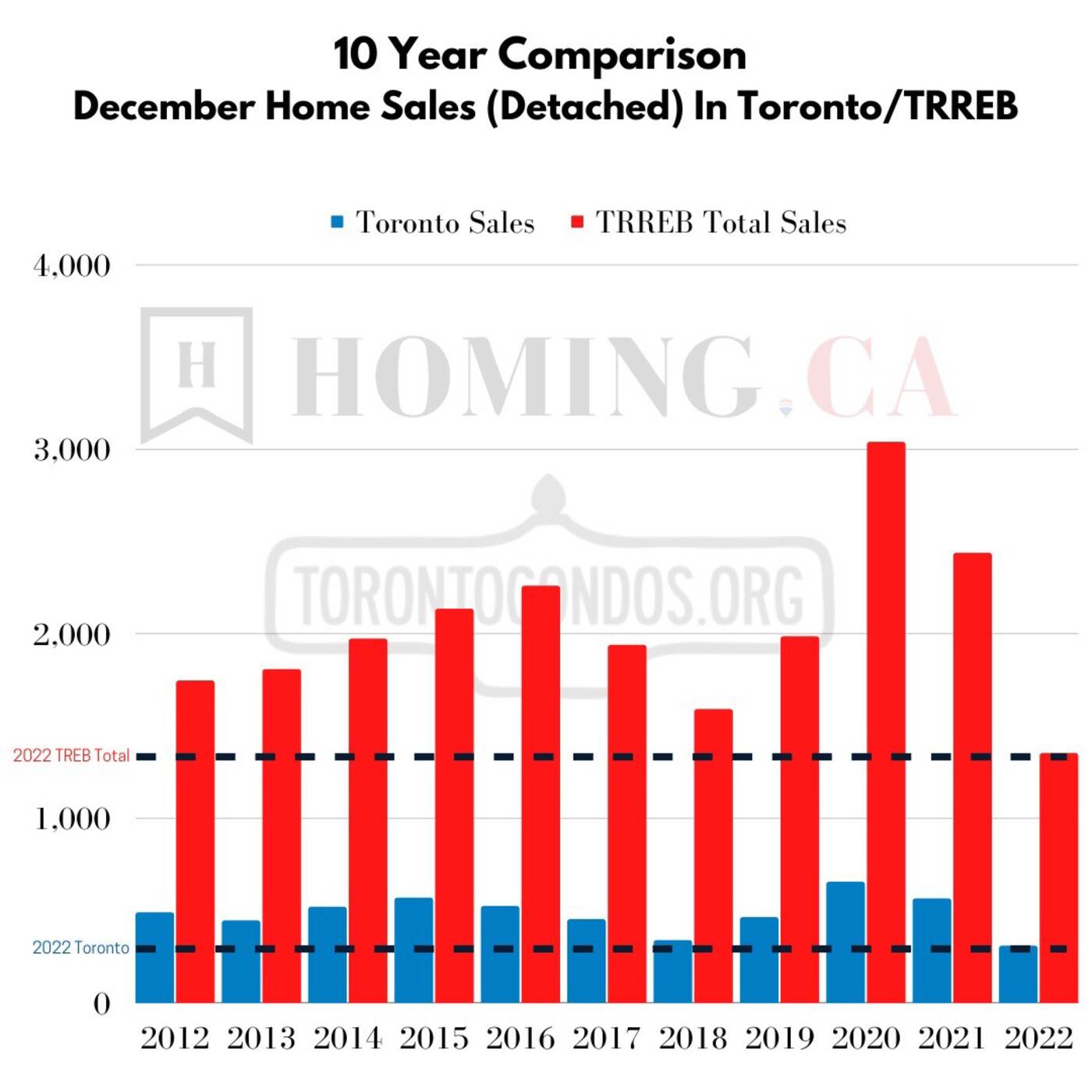 December home sales hit a record low in 2022. Experts blame the Bank of Canada, in part, for hiking interest rates so much that most people can no longer qualify for mortgages. Graphic via homing.ca.

As far as the difference in prices between a decade ago and now, they're a bit hard to stomach... at least for prospective new homebuyers who are trying to enter the market right now.

Suffice to say that average incomes haven't been rising at the same rate; According to a recent RBC Economics report, the average Toronto household now spends around 85.2 per cent of its income on mortgage payments — nearly three times more than what meets the definition for "affordable" in this country.

Should someone in that position choose to upgrade to an average-priced detached home today, they'd need to spend at least $325,527 of that cash on a 20 per cent downpayment, leaving them with $73,210 left over.

It's not as much as someone who bought a detached house ten years ago has raked in since, but it's a heck of a lot more than Toronto renters gained: As of 2023, it'll cost you just over $30,000 per year to rent a one-bedroom apartment in The 6ix.