Astronomically high Toronto home prices may have fallen a bit since the Bank of Canada started hiking interest rates in March, but purchasing property is no more affordable than it was last year.

Quite the contrary, in fact.

A new report from RBC Economics suggests that home ownership costs are skyrocketing as interest rates soar, driving the bank's aggregate affordability measure to its lowest point in history at 62.7 per cent.

You see, lower home prices mean very little when, after six consecutive rate hikes in just nine months, nobody can secure the funds to buy one.

Qualifying for a mortgage on the purchase of a typical Toronto home at benchmark price (about $1,074,300 across all property types) has gone from difficult to nearly impossible for many buyers on account of interest rate hikes over the past year, according to RBC economist Robert Hogue. 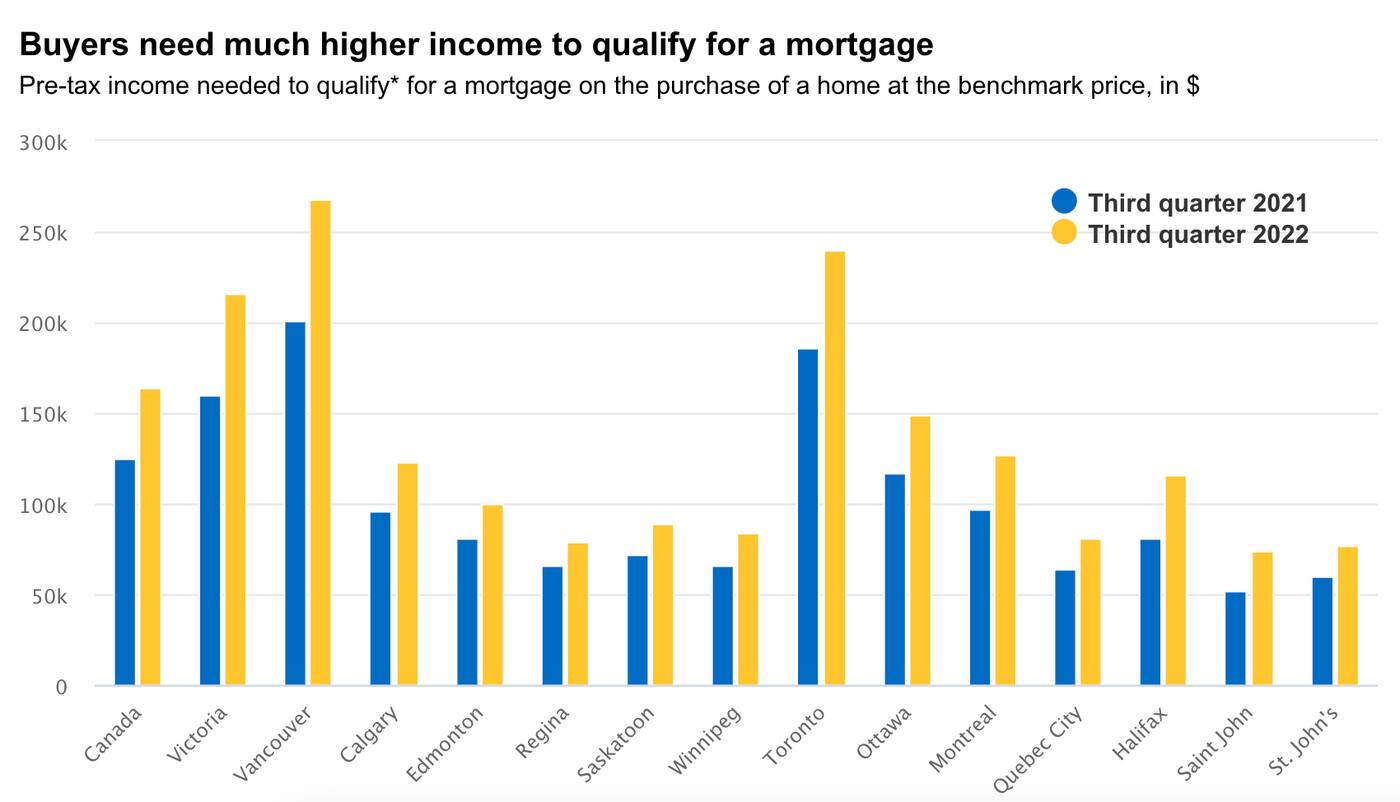 It has never been harder financially to buy a home in Canada as it is right now, according to economists. Image via RBC Economics.

"Sky-rocketing home prices earlier in the pandemic raised the bar by several notches for Canadian buyers. But the spike in interest rates since March served a crushing blow in parts of the country," reads Hogue's latest report, entitled "Homebuyer blues: dreadful affordability gets worse in Canada."

"To qualify for a mortgage on the purchase of a typical home (at the benchmark price) in the Vancouver area a buyer needed to earn a minimum of $200,000 annually in the third quarter of 2021. A year later, the qualifying income had soared 34% to an astounding $268,000."

And in the Greater Toronto Area? You'll now need to make at least $240,000 per year to get a mortgage on an average-priced home — much more if you're looking in the 416, where the average price for a detached, single-family house is now around $1,616,700.

This marks a 29 per cent increase over the previous year, which may explain, at least in part, why home sales have dropped so drastically (sales are down by 41 per cent in Ontario, year over year.) 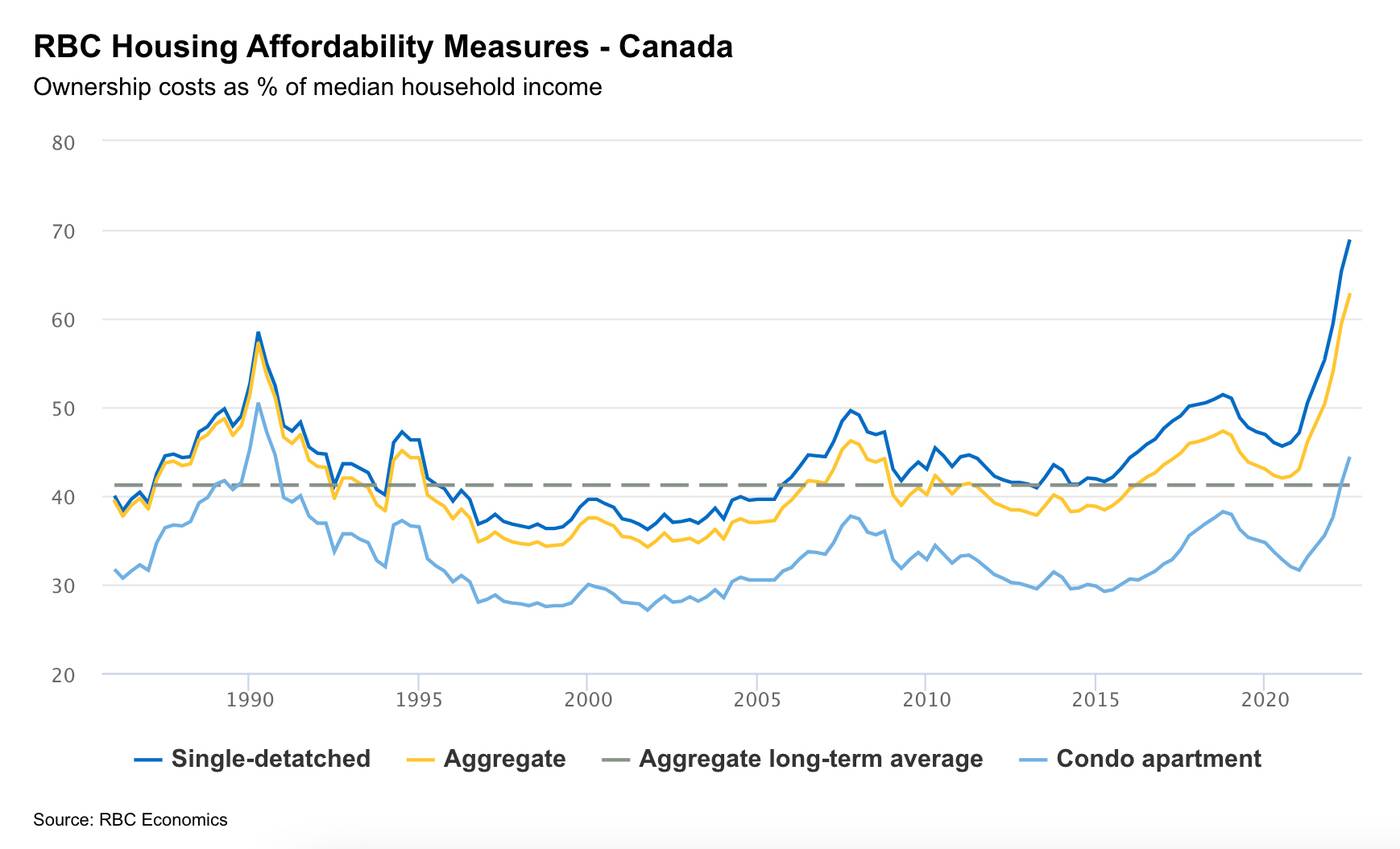 The amount of money people are spending on housing costs proportionate to their incomes has risen sharply in recent years, surpassing new highs every month. Image via RBC Economics.

"It's never been so unaffordable to buy a home in this country. Further interest rate increases propelled RBC's aggregate measures to yet new record highs nationally and in Victoria, Vancouver, Toronto, Ottawa and Halifax in the third quarter. (An increase in the measure represents a loss of affordability.)," reads the report.

"Affordability issues aren’t likely to reverse quickly. It will take more time for the market to absorb the rise in mortgage rates."

But it will eventually absorb them, according to Hogue, after the market bottoms out this spring.

"The market correction's silver lining is it's setting the stage for some affordability improvement in the year ahead. We expect the national benchmark price to fall 14 per cent from its early 2022 peak, providing significant scope to lower ownership costs once interest rates stabilize," predicts the economist.

"We think that could start in the early part of 2023—though the timing is poised to vary by market. Growing household income will partly drive the improvement process. It will likely take years to fully reverse the tremendous deterioration that took place since 2021." 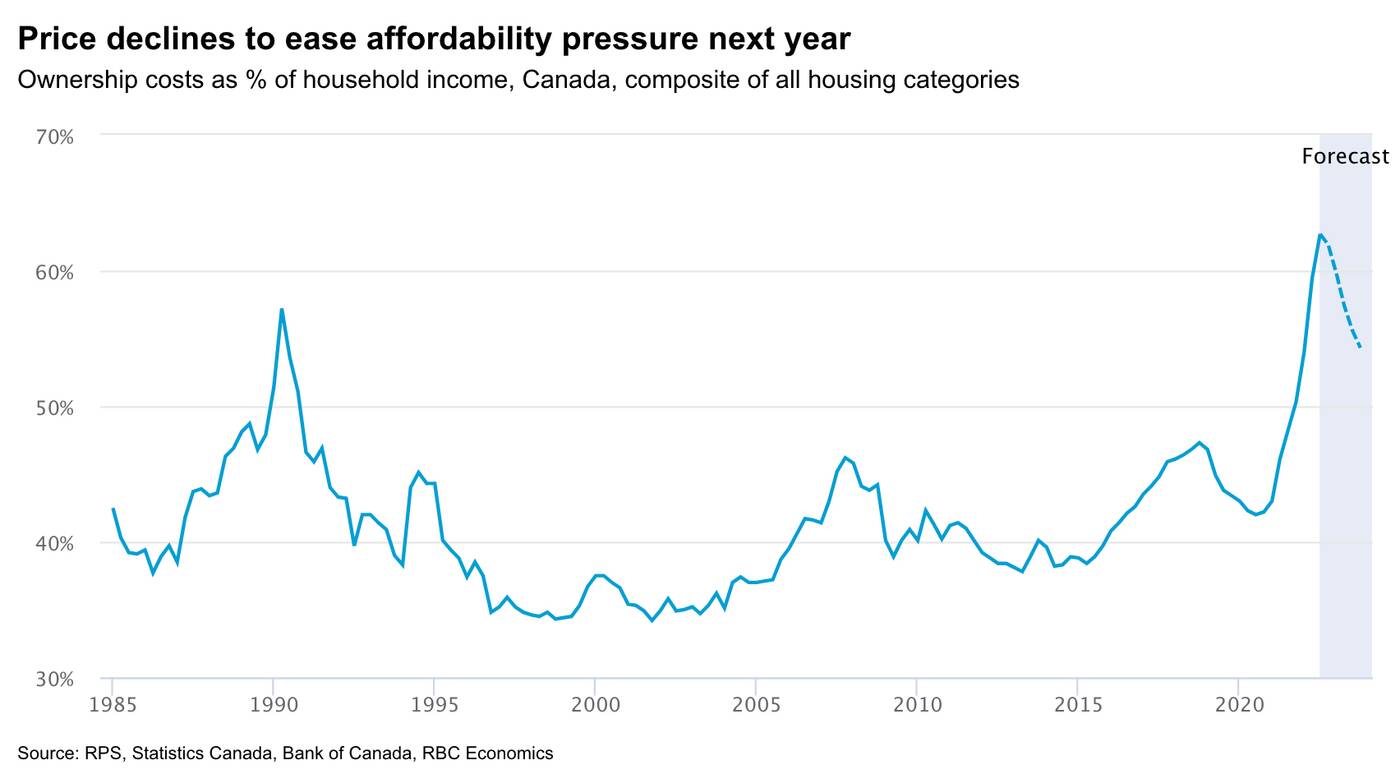 The national benchmark home price is expected to fall by as much as 14 per cent this spring when the market starts to rebalance. Image via RBC Economics.

This correction can't come soon enough for Canadians, especially those living in B.C. and Ontario, where skyrocketing rent prices have made city life with no equity unsustainable.

With the average Toronto household now spending around 85.2 per cent of its income on mortgage payments, it's hard to say owners are faring much better.

Something's got to give.