Home prices have been rising steadily across the country in recent decades, hitting a point where it now takes the typical young adult roughly 27 years to save up for the downpayment (and nothing else) on a modest Toronto-area home.

As of November 2022, the average price for a detached house within the City of Toronto itself was more than $1.5 million. Nobody can agree on what's going to happen with the real estate market as interest rates rise and home sales tank, making the idea of taking on a massive mortgage even scarier for people who could stand to lose their entire life savings.

So, with fewer people willing to buy properties, and even less able to afford them, masses of millennials have been forced to rent places in cities where they can build the careers they want — and with more competition comes higher prices, as we've seen on Toronto's rental scene.

This phenomenon, according to a new report from RBC Economics, isn't restricted to major urban centres, either; it's happening everywhere.

"There have never been so many renters in Canada," reads the report in question, released Wednesday and entitled "Is Canada becoming a nation of renters?"

"According to the 2021 Census, almost 5 million households rented the home they lived in last year — up from 4.1 million a decade earlier. And while owner households still dominate the Canadian landscape by a ratio of two-to-one, renters accounted for most of the growth over the past 10 years." 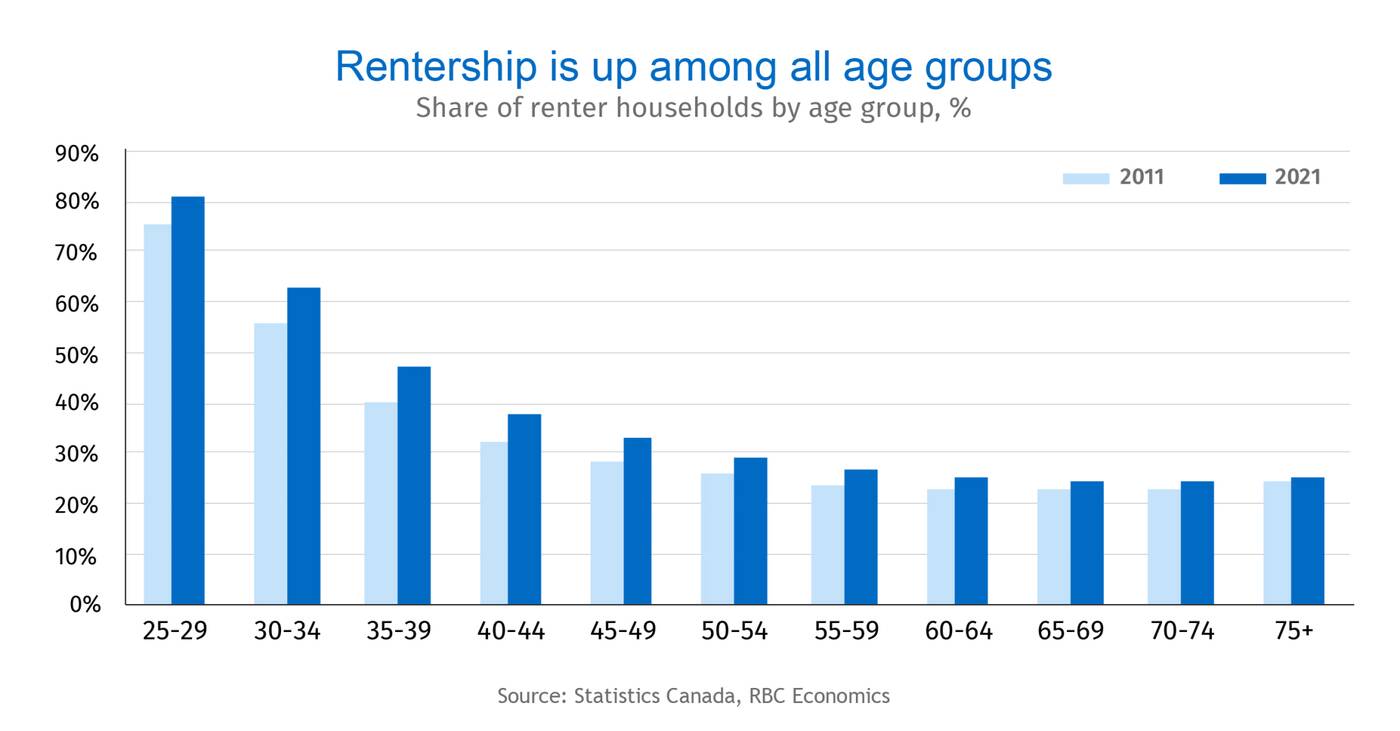 Rentership rates rose among every age group in Canada between 2011 and 2021, though some groups already had a far larger share than others to begin with. Graph via RBC Economics.

Two-thirds of Canadian households still owned homes in 2021, but it's significant that renters increased at three times the rate of homeowners between 2001 and 2021.

Economists Robert Hogue and Rachel Battaglia explain in the report that more rental units — "a lot more" — will need to be built in the years to come to meet the increasingly diverse needs and incomes of families in cities and small towns alike.

"Renting used to be a swift rite of passage to buying a first home. But there's ample evidence that younger generations of Canadians aren’t progressing up the housing ladder (from rental housing to starter homes to larger homes) quite so fast," they write.

"This isn't necessarily by choice... despite many programs to help first-time homebuyers, the rate of home ownership (66% in 2021) is now trending lower and getting ever-closer to the OECD average (64%)."

And while young adults in big cities are being hit hard by current economic conditions, they're far from alone in driving up demand for more rental housing.

Baby boomers are technically the fastest-growing group of renters, despite low overall rates of just four per cent. Smaller cities are also seeing faster growth among renters now than larger cities, where renting has long been common for many.

"At 22 per cent, renter growth over the last ten years was slightly stronger in smaller cities (census agglomeration areas) than in larger cities (census metropolitan areas) at 2 per cent. The widespread shift toward renting suggests affordability issues in large urban areas may not be the only driving force," reads the report.

Add in an aging population keen on downsizing and fast-rising immigration levels and we're looking, as many experts have already warned, at an even more severe affordable housing crisis in the years ahead.