In 1976, it would have cost someone between the ages of 25 and 34 about six years to save up enough money for a downpayment on their first Toronto home, based on real estate prices and the average income for that demographic at that time.

Today, per another head-spinning piece of data analysis from Generation Squeeze, it would cost someone in that age range about 27 years to save up for the same home.

That's more than two decades longer than their parents would have had to save for the exact same type of place. We can thank Toronto's completely bonkers housing market for that, but stagnant salaries seem to be playing a bigger role than most people realize.

According to analysts, the typical full-time annual earnings for young adults would literally need to triple (to an average of $172,000 per year) to allow for a typical young person to carry a mortgage that covers 80 per cent of the value of an average-priced home in the city at current interest rates.

And boomers wonder why their (city-dwelling) adult children are all stuck in Peter Pan mode, delaying important milestones like home ownership and having kids until... well, we have yet to see when the majority of millennials will be able to afford either of these things in Canada's largest city.

Maybe they never will, and that's okay — but nobody can blame our lack of stability on Uber Eats and poor financial skills. 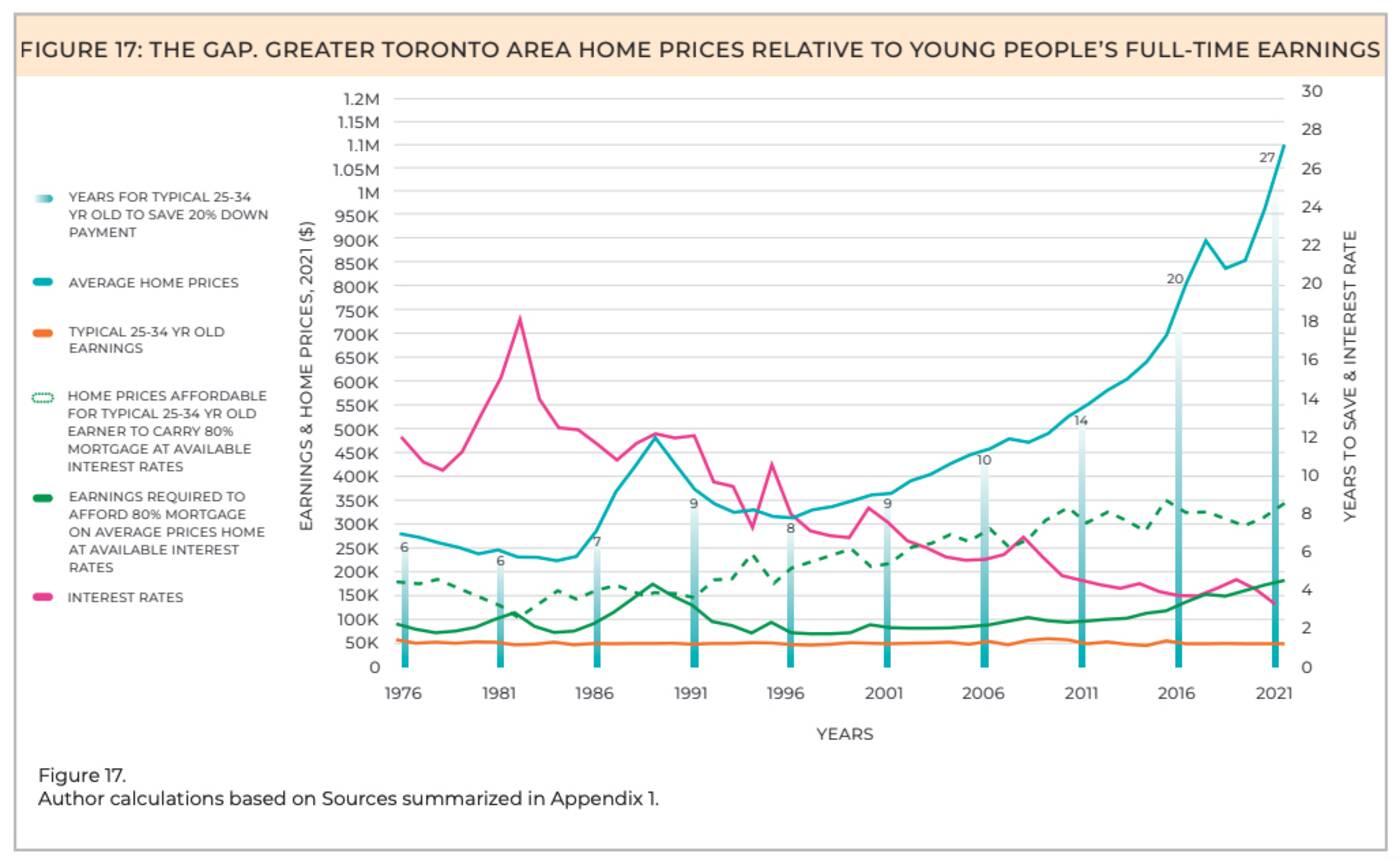 Full-time workers aged 25-34 are making, on average, the same amount of money that someone in the same age range would have made in 1976. Meanwhile, housing prices have tripled. Image via Generation Squeeze.

Generation Squeeze argues as much in the latest installment of their excellent "Straddling the Gap" series, which explores, highlights and proposes solutions to the undeniably problematic wealth disparities between older and younger generations.

"Thanks to rising prices, many home owners have extracted huge wealth from the housing system, especially those fortunate enough to buy into the market decades ago. Growing their wealth has come at the cost of harmful unaffordability for younger people, newcomers, and renters," explains the Canadian think tank's website.

"Hard work no longer pays off for young people the way it did for previous generations, thanks to declining wages and higher costs for things like education, housing, and child care."

"The generation raising young children is doing all it can to adapt by going to school longer, devoting more time to paid work, and scaling back expectations for their homes (in terms of size, access to yards, and proximity to employment)," the site continues.

"Despite these adaptations, more than one-quarter of Canadian children are vulnerable when they enter kindergarten... Generational fairness is the key to fixing Canada's broken generational system."

And one of the keys to driving policy changes that might make life more affordable for hard-squeezed young Canadians is information. The more we can see how messed up the situation is, the more we're willing to help fight change it, and Generation Squeeze does a fantastic job of laying out data points in a way that's accessible enough to send shivers down the spines of anyone under 45.

The latest report from the charitable organization looks at how the gap between local earnings and average home prices has grown between 1976 through to 2021, the last year for which annual data is available.

"Young people are often told they'd be able to afford to buy a home if only they stopped spending money on expensive lattes. But you'd have to give up drinking 15 lattes a day, every day, for five years, to save the 20 per cent down payment on an average priced home in Canada," reads the preface to Generation Squeeze's new 50-page-long report.

Housing prices have been going up in Canada for decades, but have intensified rapidly since the year 2000. According to the report, home prices have tripled since the mid-70s when adjusted for inflation.

"Rising prices continue to be a significant source of wealth for many Canadians already in the housing market, especially home owners who purchased homes decades ago. Since 1977, escalating home values have contributed an additional $3.2 trillion in housing wealth, with two-thirds of it going to those over age 55.1."

With average incomes all but frozen (if not lower in some sectors than they were 40 years ago,) millions of young first-time homebuyers are all but completely locked out of the market.

People in those positions are renting at a rate nearly double what someone their age would have spent on rent in 1981. The average rent for a 2-bedroom unit in the GTA in 2021 was $20,148 per year, according to the report, compared to average rents around $11,671 30 years ago.

@GenSqueeze's Paul Kershaw will be hosted by the @munkschool Alumni Network for an online event on Tuesday, Nov. 29.

He'll be chatting about breaking Canada's addiction to high and rising home prices.

So what can be done, if anything at all, and why is this problem only getting worse?

Politicians have proposed solutions that appear to have done nothing for boosting affordability pretty much anywhere in Canada. Think tanks and analysts all across the board have put forth ideas of their own, but an idea's only an idea without the power to execute it.

You'll find a fascinating discussion surrounding these issues taking place on Reddit, where one local joked (I hope) that a young Torontonian's best bet these days is to simply say f*ck it.

"Just do drugs party hard and die early," they wrote. "Seems the only reasonable thing to do now."