As much as people are naturally drawn to the nation's biggest city, it's been notoriously unaffordable for quite some time: housing prices are rapidly getting worse while rent and the general cost of living only continue to spike to record highs.

But looking at real estate prices elsewhere in the province, it's evident that the bonkers market isn't just a Toronto thing, but is pretty consistent across the board as people move out of the city and continue to drive up prices both within the region and farther away.

Skyrocketing real estate costs are also a trend in metropolitan areas across Canada as markets in even traditionally less-desirable areas heat up, and fast, but with the lowest housing stock of all provinces and some of the highest actual prices, Ontarians may have it the worst.

Totally normal Canadian house price charts. How many Canadians could find all 4 of these places on a map? pic.twitter.com/vgwBbHRTZ5

When looking at prices since 2005 using the Canadian Real Estate Association's Housing Price Index tool, it's quite shocking to see just how quickly markets have spiked in the past two years alone, with the average price in many regions more than quadrupling in less than a decade and doubling between January 2020 and January 2022.

Though it can often feel like Toronto is the most out of control due to how untenably high the prices are, the huge market jumps in lower-priced regions are equally staggering when looking at the changes over time — probably even moreso for residents who are used to far lower figures.

It's great for anyone who happens to own property already, but it means increasingly more Canadians are priced out of many of the locales they could reasonably live in, and are faced with the reality of renting forever (and kicking themselves for not buying even a few years ago, if they could have). 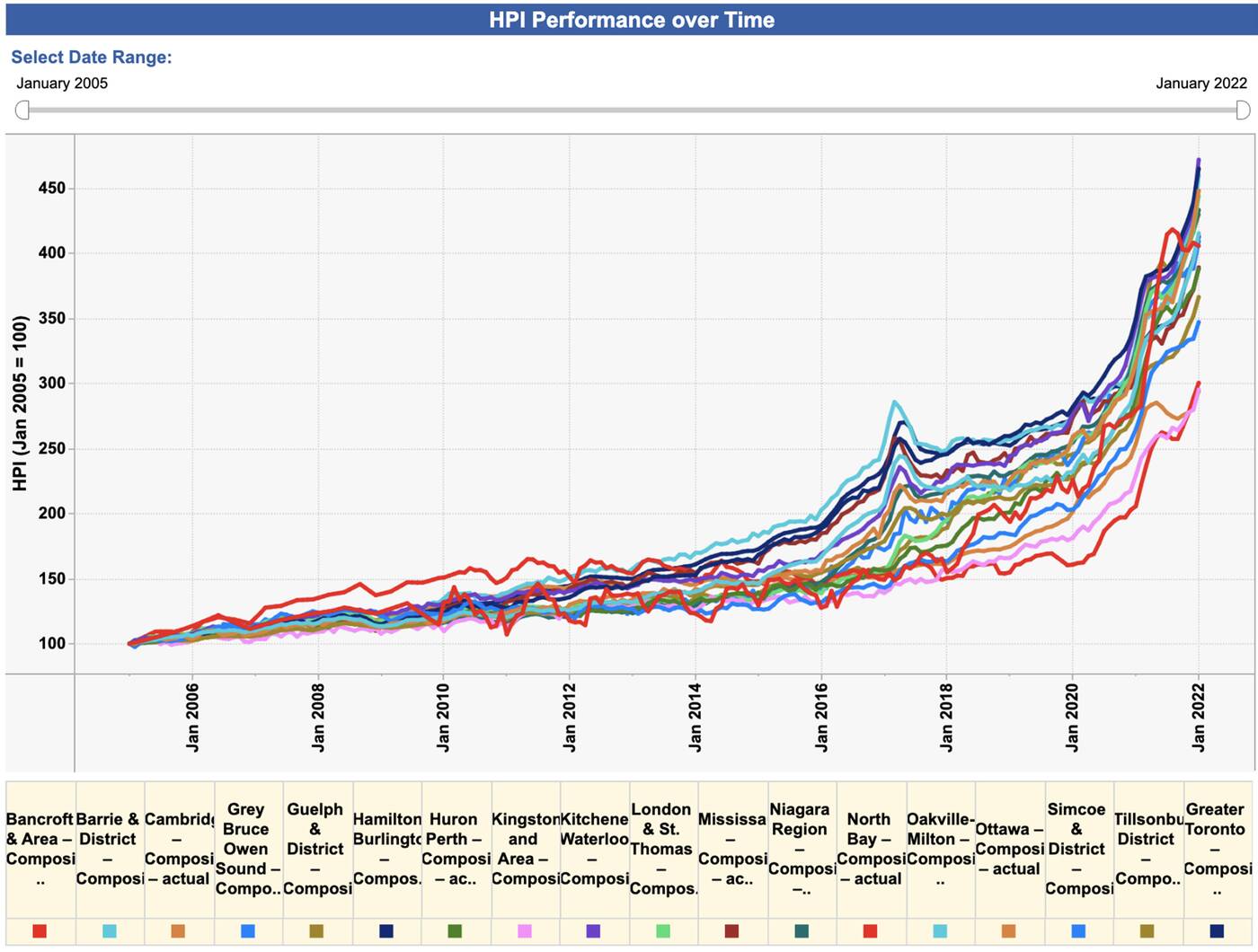 Housing prices have followed a similar trend on 18 regions across Ontario from January 2005 to January 2022. Chart from the Canadian Real Estate Association.

Looking at the change on a chart over time really puts into perspective how big the increases have been, especially over the course of the pandemic.

While many of these areas are still significantly cheaper than Toronto, prices are rising at the same wild pace as Ontario's capital, begging the question of when things will ever cool down.

Based on some talk in the industry, it could be soon — but until then, it's probably best to stay out of the market if you're not already in it.