We're 18 months into the pandemic and have reached the point where health officials are saying that we need to learn to just live with COVID-19, but people are still taking off from downtown Toronto for cheaper, more spacious and less dense housing in the surrounding suburbs, just as they started to when lockdown restrictions first set in.

T.O. just saw its largest population decline in decades as residents leave for places like in Oshawa, Hamilton, Guelph, Peterborough, Windsor, Burlington, Brampton, Niagara, and more faraway locales, whether they be small Ontario towns or cities in other provinces.

It's setting records and causing a flurry of activity in both the rental and real estate markets, which, of course, means skyrocketing prices as demand heightens amid existing supply — which Ontario has less of than any other province in proportion to our population.

And, it's not a trend that has let up as we have pushed closer to normalcy, or is expected to let up anytime soon, according to new reports from the experts at RE/MAX.

The real estate giant noted on Thursday that both Durham and York Regions are absolutely booming lately when it comes to residential real estate sales, and showed record year-over-year growth in 2021. 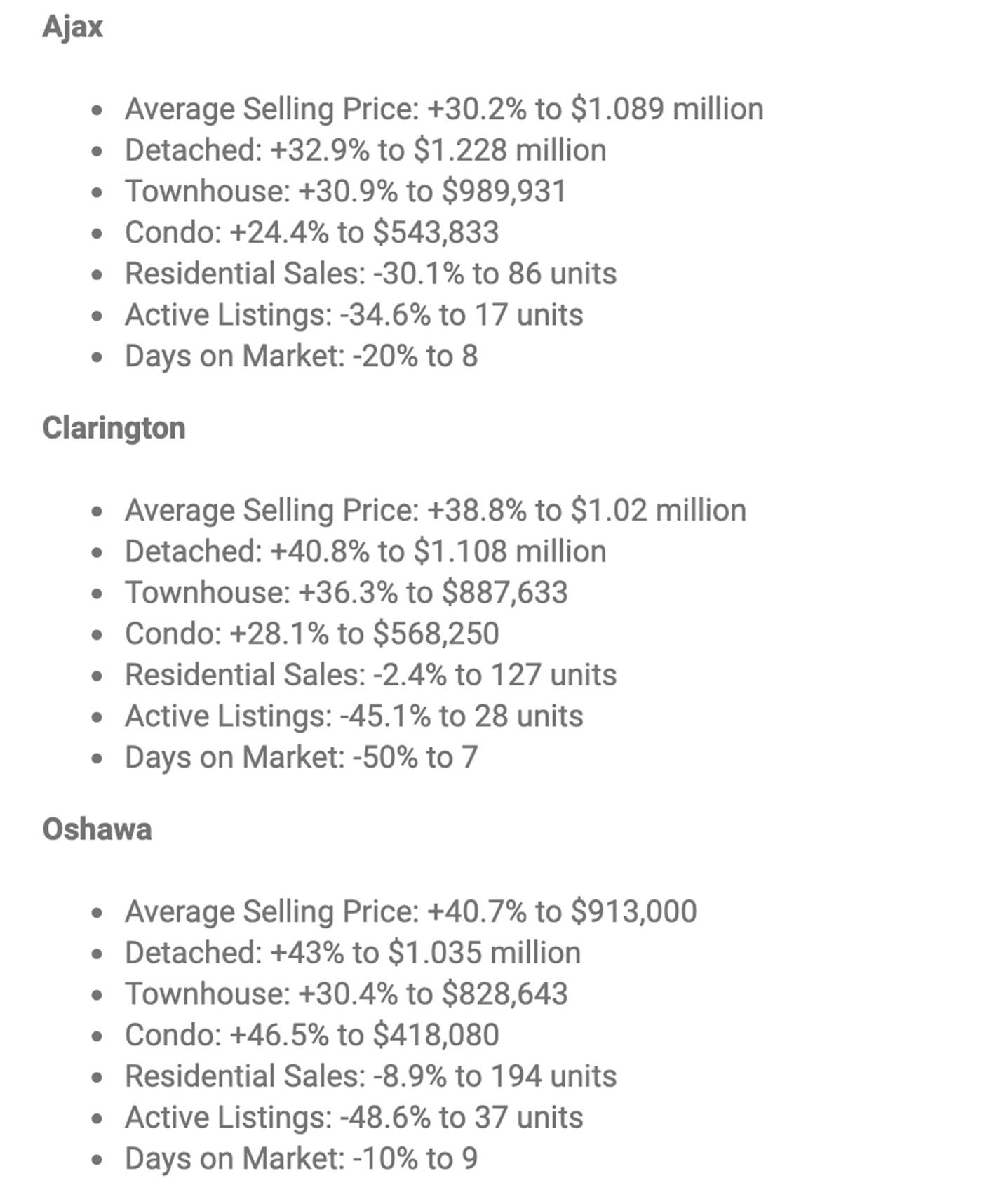 Sales figures from December 2021 in parts of Durham Region, compared to December 2020. Numbers from RE/MAX.

By December, average prices for some home types in some towns were up a whopping 40 per cent since December the previous year, such as in Oshawa, where detached houses are now going for an average of $1.035 million, up 43 per cent from the end of 2020.

This is also amid what should be the slowest months in the industry.

The same can be said for York, where vacation properties on Lake Wilcox are especially popular lately.

RE/MAX also notes buyers moving to smaller, quieter areas in the region, such as Richmond Hill and Markham, which are "not situated in the middle of nowhere" and "strike the right balance between living in the downtown core and enjoying small-town living."

"York Region has certainly benefited from the trend of families ditching shoeboxes in Toronto for a spacious residence," it continues. 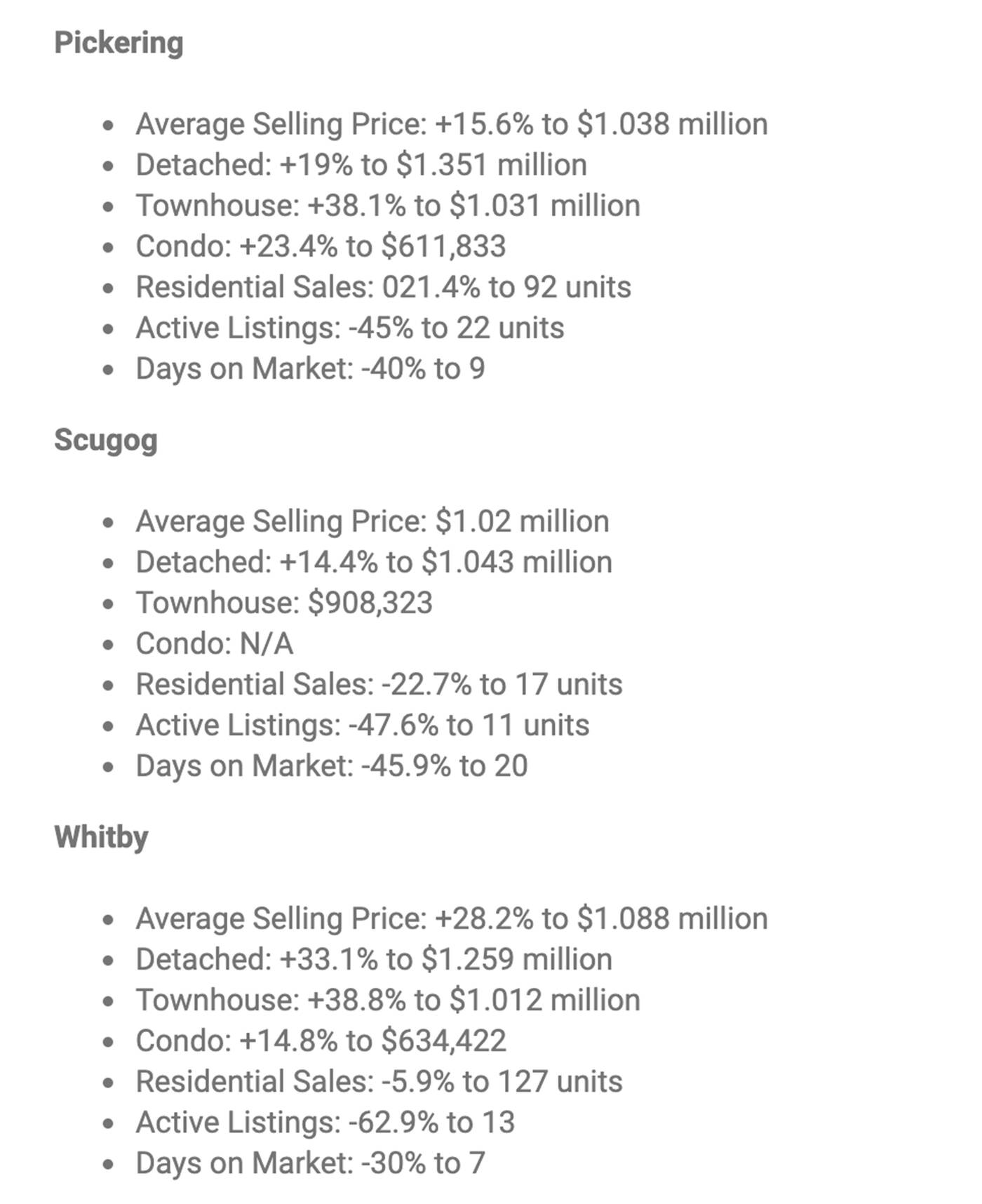 Sales figures from December 2021 in more parts of Durham Region, compared to December 2020. Numbers from RE/MAX.

Looking forward, both Durham and York are expected to see increased interest from people in downtown Toronto, even if lending rates go up.

"Tight market conditions prevailed throughout the GTA and broader Greater Golden Horseshoe in 2021, with a lack of inventory noted across all home types. The result was intense competition between buyers, pushing selling prices up by double digits year-over-year. Looking forward, the only sustainable way to moderate price growth will be to bring on more supply," RE/MAX says.

"Durham Region real estate prices are projected to climb seven per cent to a jaw-dropping $978,566, while sales growth is also expected to grow seven per cent. From Clarington to Oshawa to Whitby, being less than an hour outside of Toronto is proving to be beneficial for residents and sellers alike. Whether prospective homeowners will see some easing over the next 12 months or not remains to be seen."