Despite the non-stop construction of generic new condo towers in its biggest city, Ontario has just been found to have the most drastic housing supply crisis out of all provinces in the country.

In a new report, Scotiabank Economics rated Ontario the worst province when it comes to homes per capita, so far behind the rest of the pack that we would need more than 650,000 units built immediately to meet Canada's average.

And, Canada's average isn't all that great either, having the lowest number of housing units per 1,000 citizens of any G7 country. When looking at this group of nations, Ontario would need a whopping or 1.2 million homes to catch up.

Manitoba and Alberta are also well below the national average in this respect, while Newfoundland in particular has a wealth of housing available for the people who choose to live there. 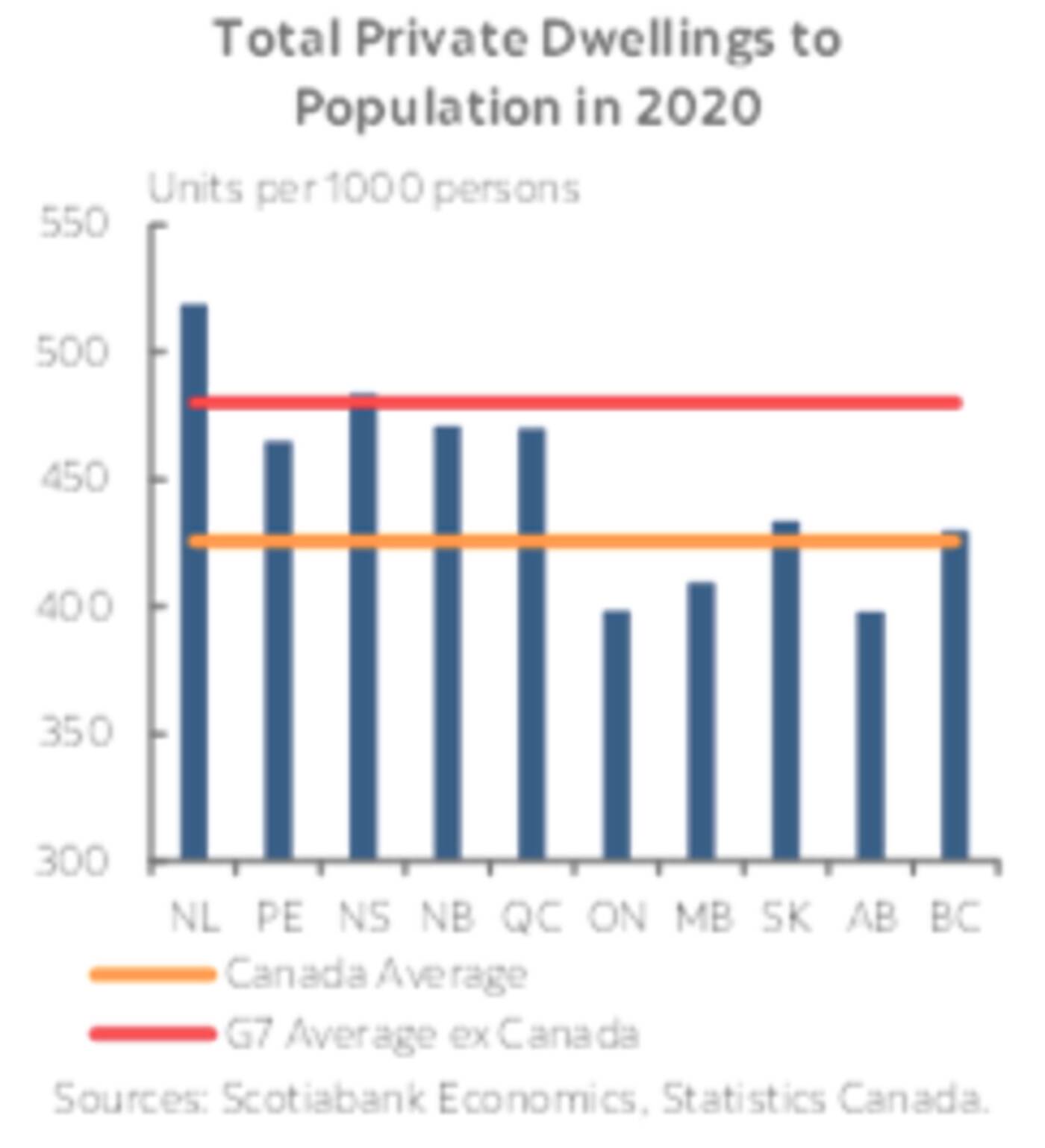 Ontario officially has the lowest level of housing stock per 1,000 residents. Chart from Scotiabank Economics.

"By comparing the number of homes in provinces that lag the national average, we can get a sense of how acute the undersupply might be. Given its size relative to other provinces, Ontario very much stands out in this respect," the analysis reads, going on to predict continually worse pricing scenarios for would-be buyers, most of whom are already priced out of the ridiculous housing markets in much of the province.

"As we look to the future, we remain of the view that the chronic shortage of housing relative to the population's needs will put upward pressure on prices and reduce affordability... our view is that prices will generally be on the rise until a better balance between needs and availability is found." 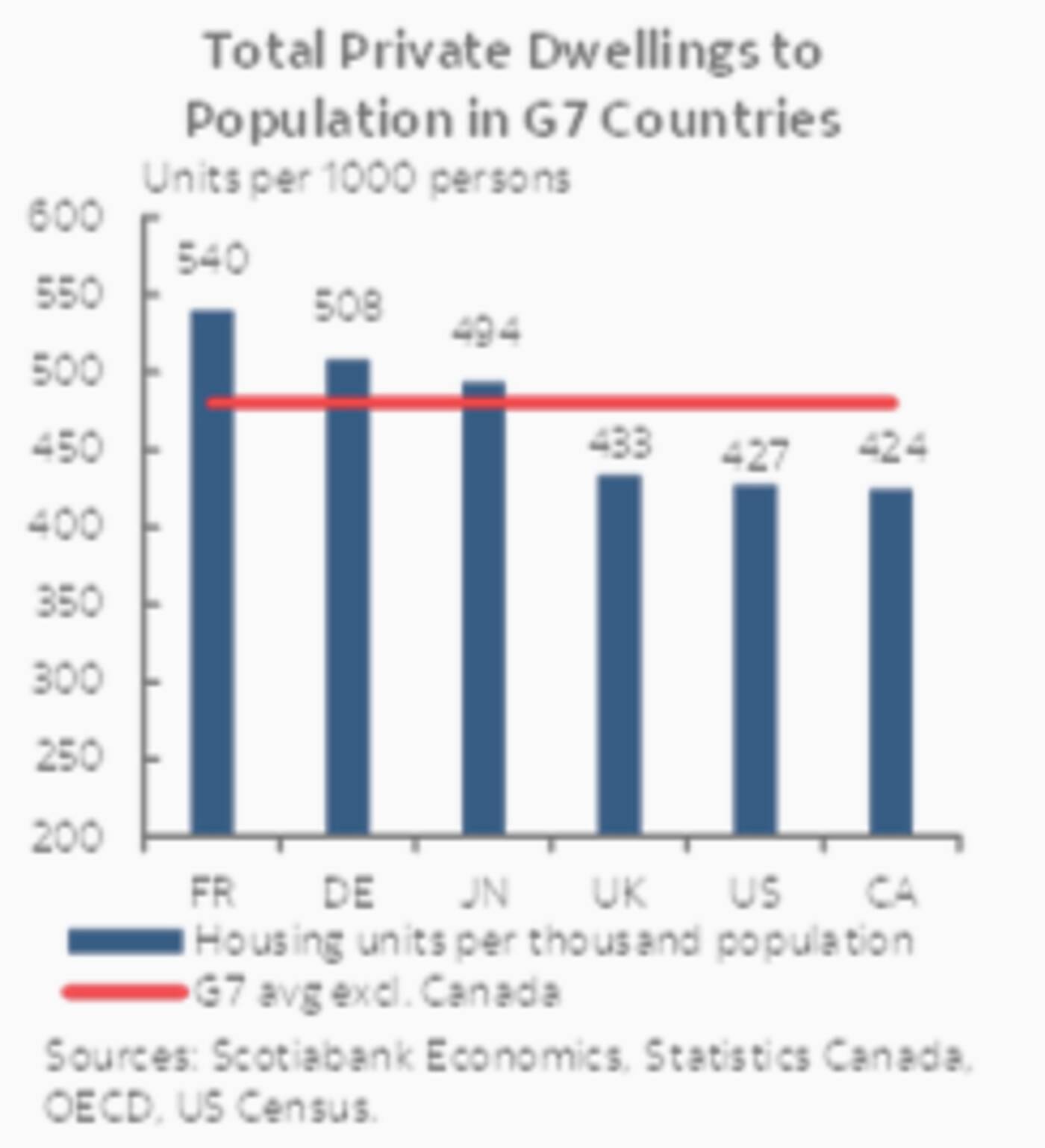 Canada does not compare well to other G7 countries when it comes to housing supply overall. Chart from Scotiabank Economics.

Given that the average price of a house in the GTA — no, not even Toronto proper — has hit nearly $1.1 million and prices have gone up more than a million in the last decade, this news may come as no surprise, especially for those who have been eyeing the market, most likely from afar with no hopes of ever getting into it.

And those who have given up on ownership in Toronto and are able to relocate have driven both residential real estate and rent prices up in Hamilton, Burlington, Oshawa, Brampton, Niagara, Guelph, Windsor and Peterborough, and even smaller and farther towns.

While Scotiabank's experts have "some cause for optimism" due to renewed efforts to focus on getting housing up, they also note that the problem is likely far too massive to solve fast enough with current plans and policies.

"What will matter most at the end of the day is actual progress in increasing supply in a responsible manner. History suggests that we have not been very good as a country in achieving this. Let's hope current initiatives mark a solid break from past performance," they conclude.

Things like high levels of foreign and investor ownership continue to be a huge issue impacting both pricing and housing availability. 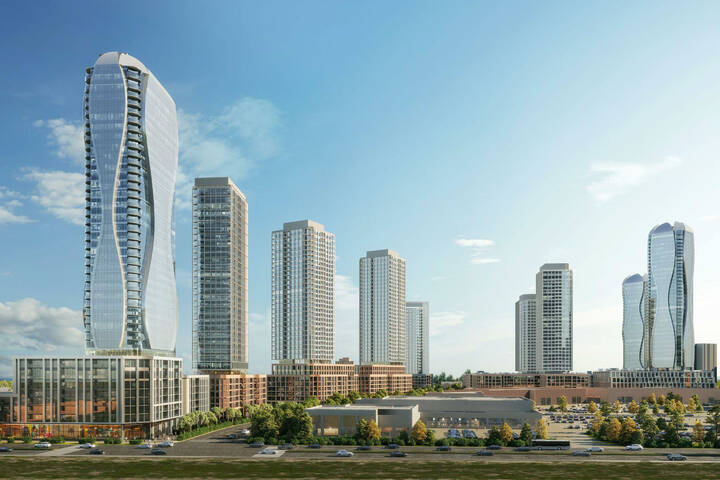 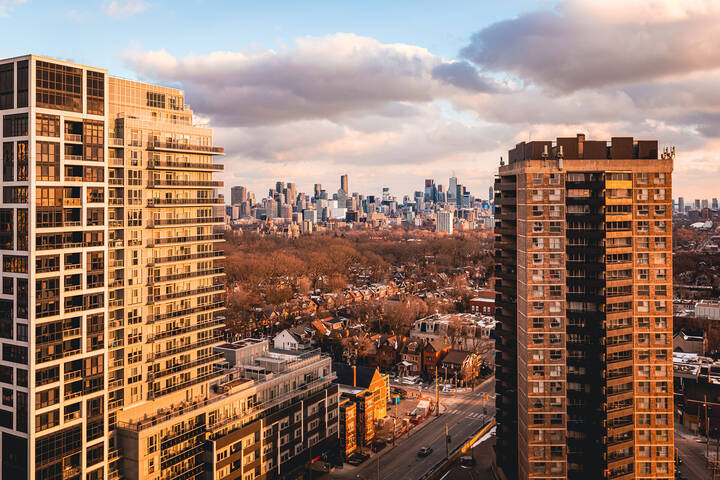